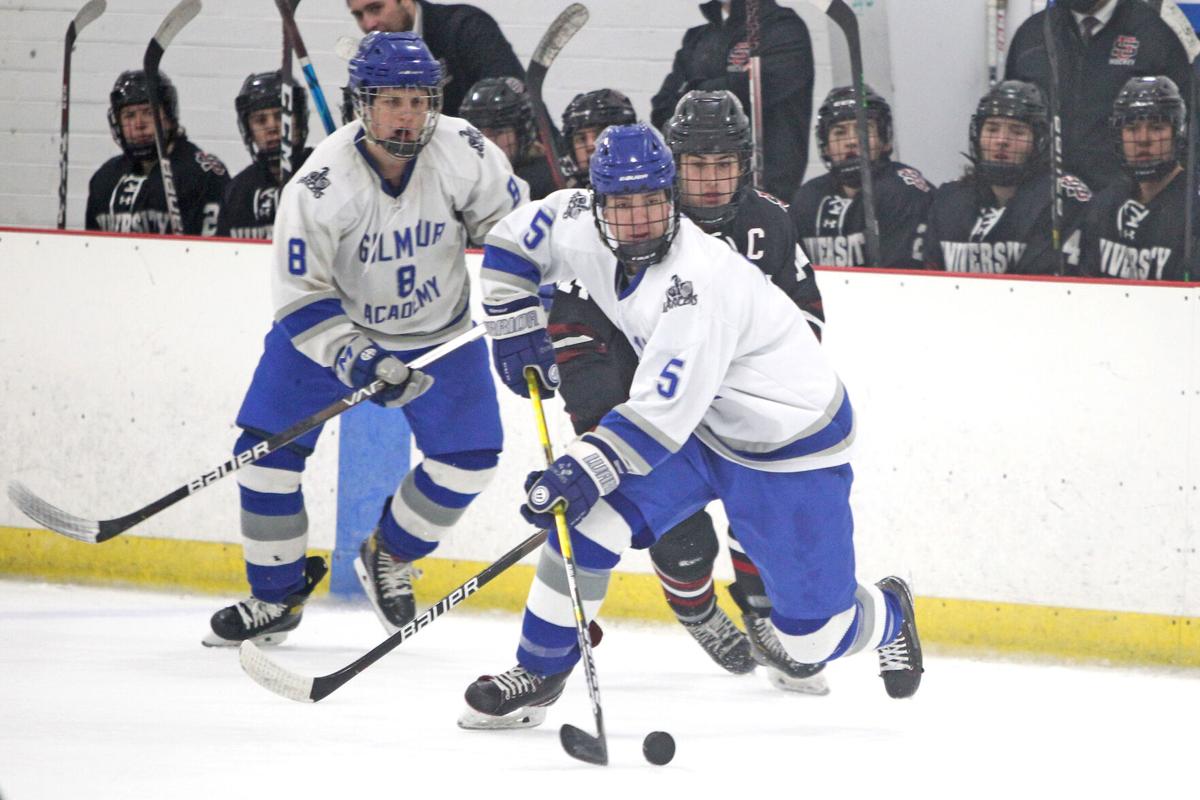 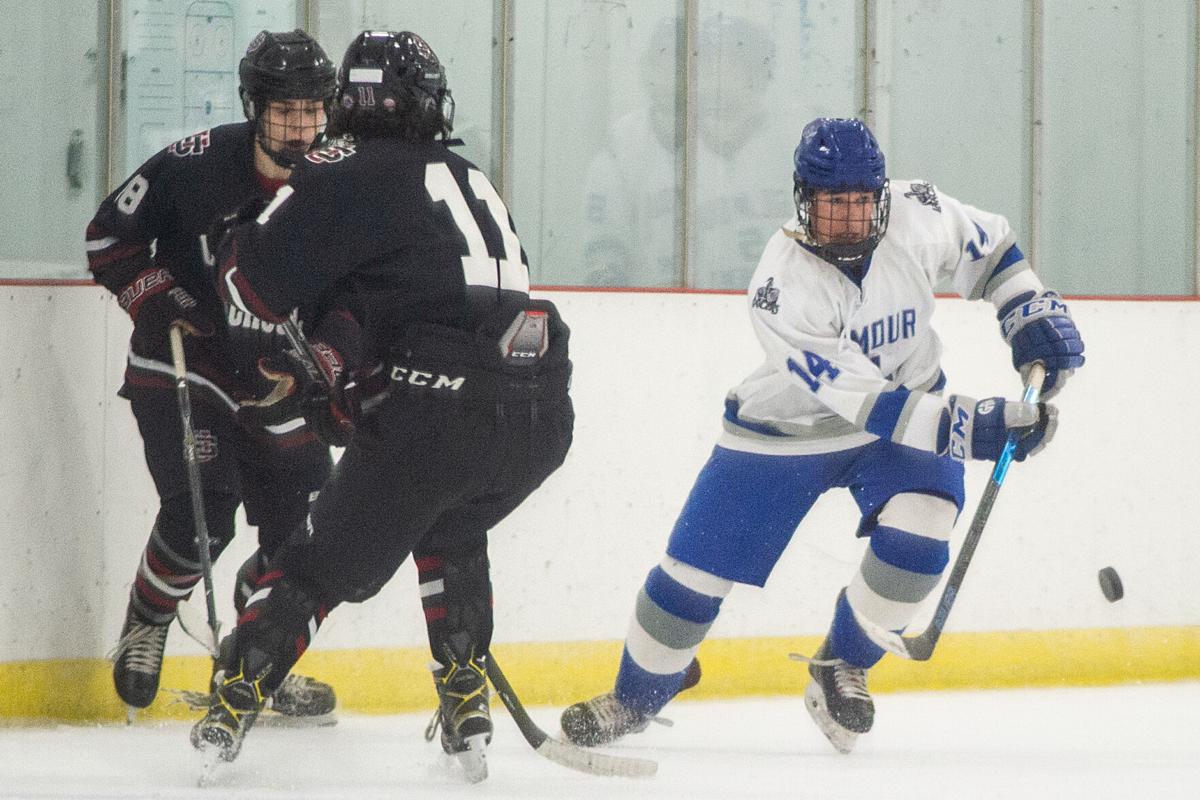 Gilmour senior forward Jack Popovich (14) chases after the loose puck in the Lancers’ win against University School on Dec. 30 at the Floyd E. Stefanski Ice Center for a fifth-place finish at the Brother James Memorial Tournament.

Gilmour senior forward Jack Popovich (14) chases after the loose puck in the Lancers’ win against University School on Dec. 30 at the Floyd E. Stefanski Ice Center for a fifth-place finish at the Brother James Memorial Tournament.

It was not by design but it just so happened that the Gilmour Lancers’ hockey team faced SOM Center rival University School in the final game of the Brother James Memorial tournament.

Gilmour ended its tournament run on a high note by beating the Preppers 2-1 in overtime last Thursday afternoon at the Floyd E. Stefanski Ice Center. The victory cemented a fifth place finish for Gilmour (7-9-1, 0-2) in the Tournament.

Gilmour Coach John Malloy could not have asked for a better way to end the tournament. The last time the neighborhood rivals met, the Preppers defeated Gilmour in overtime.

“Over the last three games we’ve started to play Lancer hockey,” he said. “We’re really playing well on the forecheck, the back check and the defensive zone. We’re limiting teams from getting shots. It just makes it a little extra special that it was an overtime win against a rival school.”

Gilmour held a 1-0 lead in the final minutes of the third period. With time ticking away, Preppers’ Coach Andy Gerow pulled his goalie. University School brought the puck into the Lancers’ zone and sophomore forward Sam Wade fired a quick shot at the net.

Gilmour senior goalkeeper Ian Anderson deflected the shot but the puck trickled out to the top of the circle. Senior defensemen Colin Counahan rocketed a slapshot right between Anderson’s legs to tie the score 1-1 with only 00:15 seconds remaining in the third period.

For the second time this year, it would take overtime to settle this one.

“This year has been more of the same,” noted Gerow. “It’s been two really good teams battling and both games have come down to extra time.”

The Lancers were in dangerous territory, having lost all three of their previous overtime games.

Gilmour turned things around when their defense forced a turnover in the final minute of overtime.

Senior defensemen Kyle Laws and senior forward Jakub Sedlacik created a two-on-one fast break opportunity. Laws controlled the puck down the ice then fed it Sedlacik just before they approached the goal. The 5-foot-11 forward rifled a shot at the net but Preppers’ senior goalkeeper Evan Crawford blocked it.

Sedlacik’s shot ricocheted so hard off Crawford’s body that the rebound caromed back into the net allowing Gilmour to walk off its Great Lakes Hockey League foe with only 00:21 seconds left in overtime.

“It wasn’t anything fancy,” the 17-year-coach said. “It was just a muscle goal. It’s the way we have to play. These are the type of players we have and they just have to go hard to the net, shoot the puck hard and look for rebounds and tips.”

Having finished with a 2-2 record at the Brother James Tournament, Malloy is pleased with what he’s seen from his team.

Having graduated most of their leading goal-scorers from last year, the Lancers’ offense has been a work in progress this season.

According to Malloy, Gilmour’s offense has averaged only 1.2 goals per game this season entering its contest against the Preppers.

“I don’t think any team wants that and we have to improve on that,” Malloy noted. “Our power play has to get better because that could be a big place to score some goals and we have to get healthy.”

After losing their first game of the Brother James tournament to Upper Arlington on Dec. 28, Malloy noticed something changed during the third period.

He saw that Gilmour played its usual brand of hockey. The Lancers continued carrying that momentum with a 3-0 victory over Northview on Dec. 29 but then lost 3-2 to Orchard Park later that evening.

Still, Malloy could see his team was playing better than it had all season.

“I think there’s been more physicality and more energy on the forecheck,” he explained. “One of the things we like to do is force teams to make quick decisions and hopefully turn those decisions into turnovers. We started doing that and that’s been a key to how we play.”

The Lancers saved their best for last by enjoying one of their best defensive games of the season in the overtime victory against University School by holding the Preppers to under ten shots on goal during the game.

Gilmour will hit the road and play Shaker Heights at Thornton Park on Jan. 7 at 7:45 p.m. then stay on the road and play GLHL rival Walsh Jesuit on Jan. 8 at 2:40 p.m, before returning home to Gates Mills for a game against division rival against Padua at 5:00 p.m. on Jan. 9.

The Preppers will travel to Lakewood to play division rival St. Edward on Jan. 7 at 7 p.m. then host the Eagles for a rematch at the Cleveland Heights Ice Arena on Jan. 9 at 6 p.m.