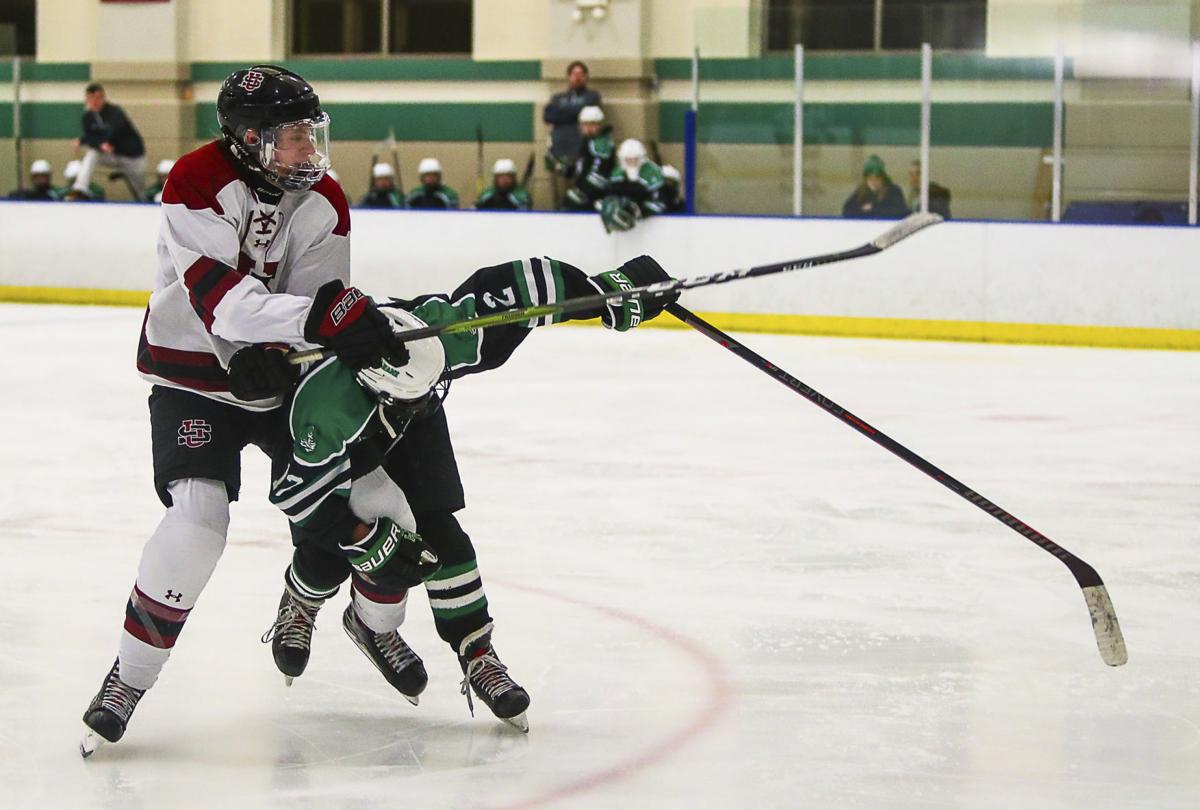 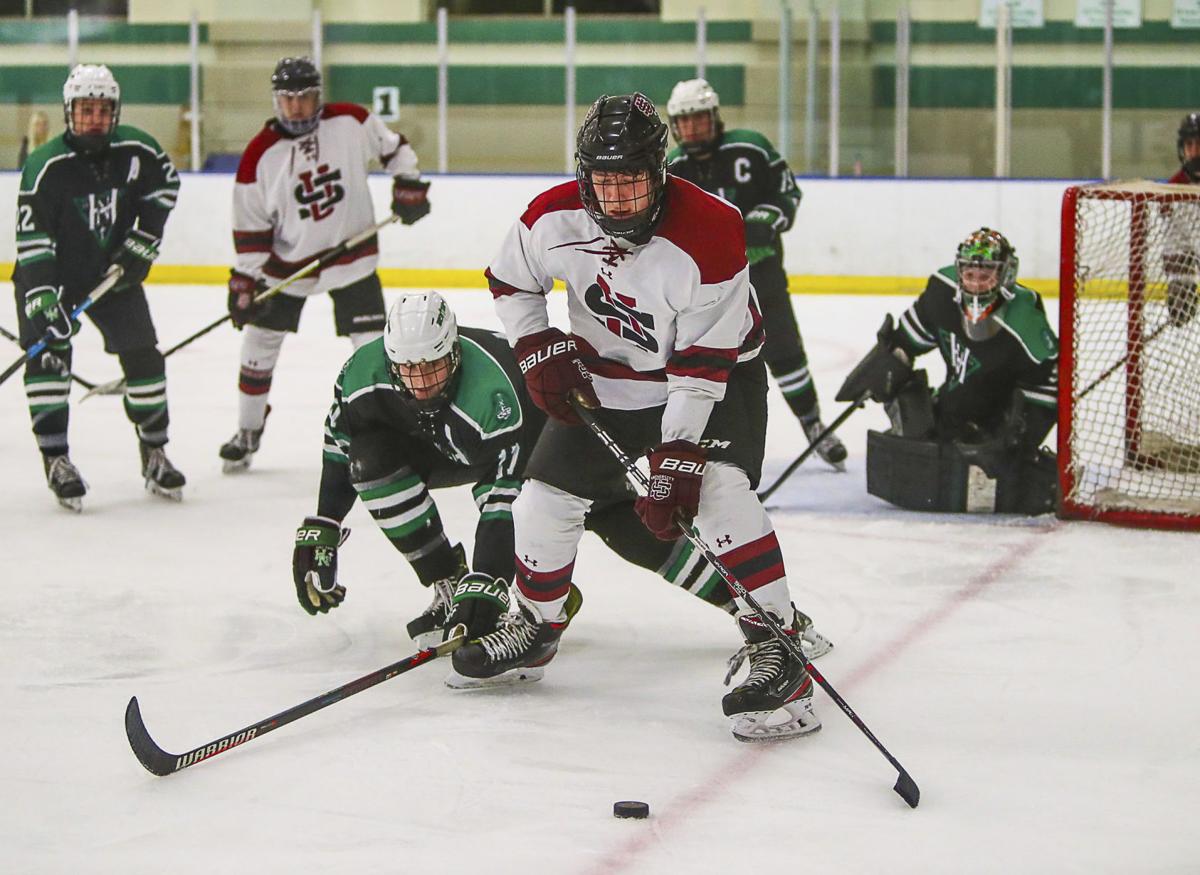 University School senior wingman Will Lvovich retrieves the rubber with Holy Name senior Seth Duncan on his six during the Ice Preppers’ 4-3 overtime victory on Sunday at their home sheet in Cleveland Heights.

University School senior wingman Will Lvovich retrieves the rubber with Holy Name senior Seth Duncan on his six during the Ice Preppers’ 4-3 overtime victory on Sunday at their home sheet in Cleveland Heights.

Falling behind during a five-on-three shorty in the first period, the University School Icemen fought an uphill battle throughout the majority of their Great Lakes Hockey League clash with Holy Name on Sunday in Cleveland Heights.

The host Preppers were in search of a rebound victory after a four-goal second period got away from them in a 7-3 loss against state No. 5-ranked St. Edward (12-6-2) two days earlier. US (8-10-1) is ranked 10th in the state, according to the coaches poll.

In the seventh minute of Sunday’s game, the Green Wave (11-7-2) had two guys locked up in the sin bin for a five-on-three power play for University School. But the Preppers got caught in the offensive zone without the rubber, as Holy Name senior captain Milo Henry got his stick in the passing lane and went the other way for a short-handed tally and a 1-0 lead.

“We had set up in the zone, and we had made a pass down low, kind of a softer pass that they almost picked off,” US second-year head coach Andy Gerow said. “We kicked it back up to the top and tried to go across, but it got tipped by one of their better players, and it was kind of off to the races because we had both of our guys standing still.”

Henry, who has 22 goals and 24 assists in 20 games for the Green Wave this season, had no problem lighting the lamp on the breakaway against University senior goalie Michael Holtz, who would finish the night with 30 saves.

Despite an 8-5 advantage in shots on goal, University trailed, 1-0, at the first intermission.

“It was a setback, but one of the things we talk about is that you’ve got to forget about it and move on,” Gerow said. “That’s what we did and ended up getting the next goal to put that mishap behind us.”

“They’ve played big for us,” Gerow said. “It was just a nice neutral-zone regroup. They got their head up and moved it D to D across the ice, and then they did a nice job of hitting Pape in stride going in the zone, and Pape just rifled one top shelf. It was a great play to see.

“So, (Cronin) coming up from JV and (Cavotta) from the Barons – they’re two newcomers this year, and, especially with Jack Borrow and Will Cha being out, they’ve really stepped into that role and played really well for us in big moments.”

But with 5:44 left in the second period, Holy Name senior forward Brennan Dickey scored an unassisted tally to reclaim the lead for the Green Wave, 2-1, and it was back to an uphill battle for University School at the second intermission.

One of the best scorers in the GLHL, and in Ohio, Dickey has 30 lamplighters and 30 assists through 20 games for the Green Wave.

“Their top line, Milo Henry and Brennan Dickey, both of those guys are definitely top scorers in our league,” Gerow said. “And I think they’re two of the top guys in the state in points. So, they got some good chances. But we have a big sheet (of ice), and we just wanted to wear them down and get some chances against second and third lines; and use our speed and crash for the rebounds.”

Greller would finish the night with 46 saves.

“We always talk about not wasting shots with shots missing the net or putting out an easy glove save for the goalie,” Gerow said. “And I thought we did a good job of putting them on the pads, crashing for rebounds and getting chances that way.”

But then there came Dickey with another unassisted tally and another lead for the Green Wave, 3-2, with 3:38 to play.

University plays one of the toughest schedules in Ohio, with a host of tournaments that include some of the best teams from Florida, Illinois, Maryland, Pennsylvania and West Virginia, but the Preppers’ only losses against in-state teams this season have come against programs ranked in the top 10 of the coaches poll. Holy Name is not ranked in the top 10.

With two minutes to play, however, University’s Flowers took the puck into the zone and used his speed to take a defender wide and got dragged down, which drew the fourth penalty of the game for Holy Name. Pape capitalized on a one-timer for the 3-3 equalizer with 53 seconds remaining to force overtime.

“We called a timeout, let the power play go for about 25 seconds, and then we pulled (Holtz) and had the six-on-four,” Gerow said. “We were working the puck really well. Heller actually had a feed across to Pape that Pape fanned on, but Will Lvovich tracked it down, got it back to Heller, and Heller found Pape again across the ice for a one-timer to tie the game.”

After scoring three equalizers in regulation, University’s starting unit fired four shots on cage in overtime before taking a backseat to the theatrics of the Preppers’ second shift.

In the third minute of extras, US senior left winger Will Lvovich picked up a lose puck in the corner, moved it up to Cavotta, who made a D-to-D pass to sophomore Colin Counahan, who put a shot on cage that senior right winger Andrew Rozenshtraukh tipped home for a sudden-death tally and a 4-3 overtime victory for the Preppers.

“I think our guys rode that momentum from the end of regulation,” Gerow said. “We had fought back all game long and just kind of said, ‘Hey, we fought by from down 1-0, down 2-1, down 3-2; we’re not going to lose this one.’ So, they did what it took.”