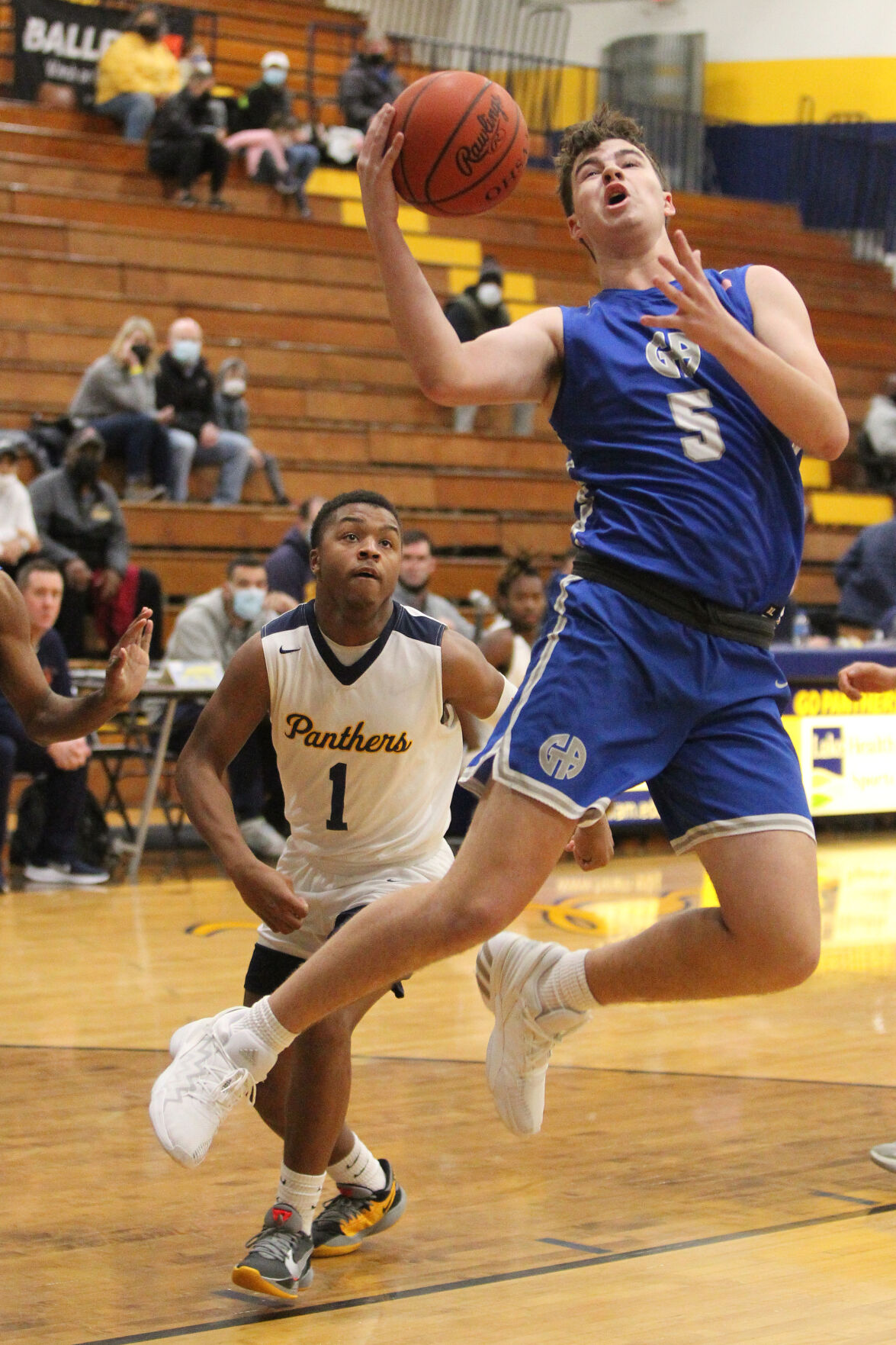 Lancers’ senior forward Nathan Nootbaar (5) attempts a lay-up in Gilmour’s win over the Panthers on Jan. 2 at Euclid High School. 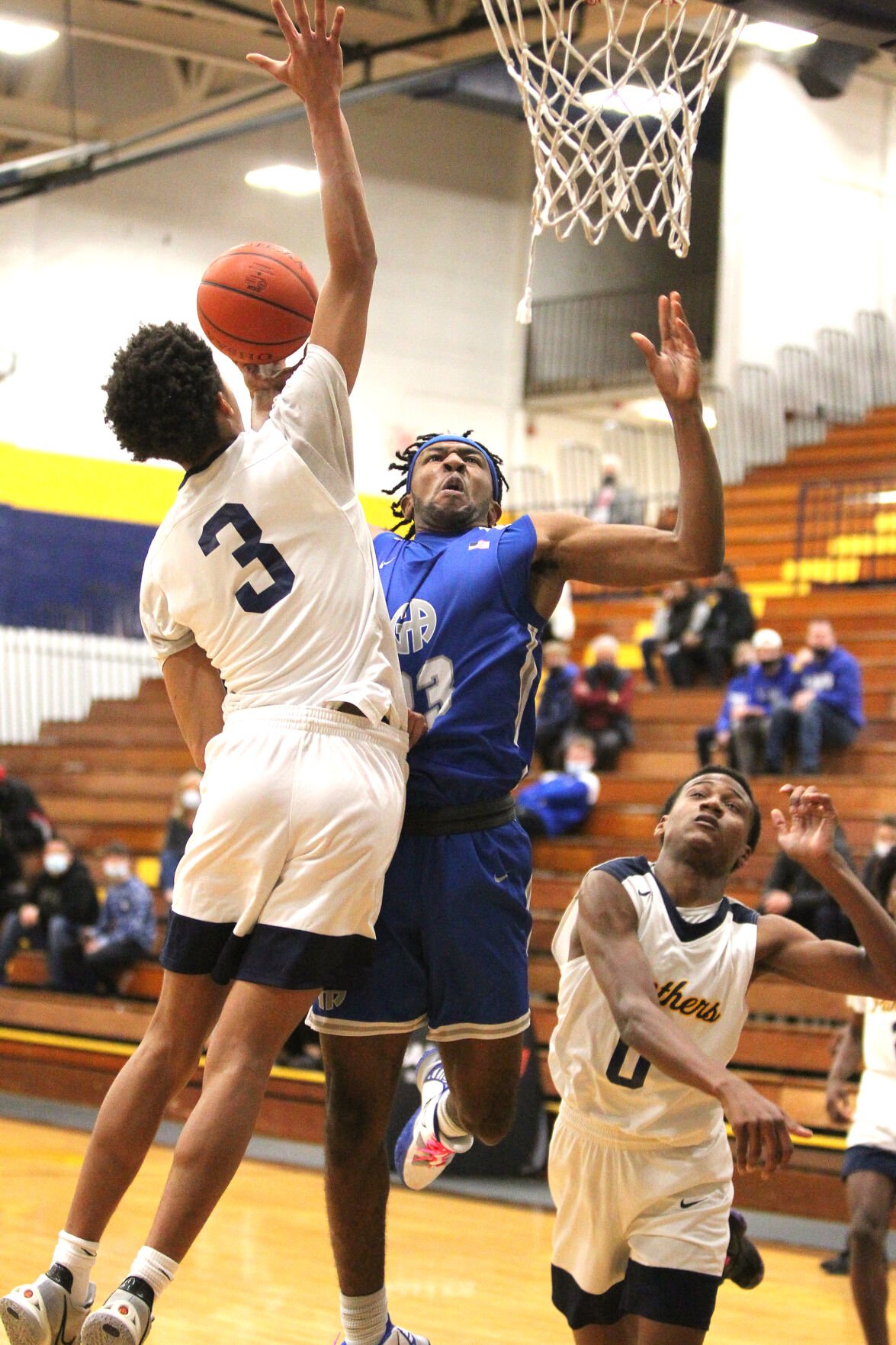 Lancers’ senior forward Nathan Nootbaar (5) attempts a lay-up in Gilmour’s win over the Panthers on Jan. 2 at Euclid High School.

The Gilmour Lancers boys’ basketball team faced a huge test against Euclid. Despite not having their leading scorer, Gilmour still defeated the Panthers 78-65 at the Play-by-Play Classic last Sunday morning at Euclid High School.

“I think our guys responded tremendously,” said Coach Dan DeCrane. “I told them before that it’s all how about you handle adversity. Our guys did a great job of that. Different guys stepped up and played more minutes, played in different areas and I thought we attacked. We had a very professional approach to the game.”

The Lancers (6-1) had been idle for over a week because their scheduled game against Lake Catholic on Dec. 30 was postponed.

Senior guard Nathan Flaherty admitted it was challenging for Gilmour to wait so long.

“It was tough,” he said. “But we came back and had two tough days of practice and hard work and came out to Euclid and got the win.”

After being sidelined for a week, Gilmour was dealt another blow when it learned leading scorer and rebounder Ryan Mueller was not available.

“We all knew we had to rebound and score more,” said junior guard Brandon Rose. “It was great to see everyone step up.”

Primarily a guard, DeCrane moved Rose to the center position to help overcome the loss of Mueller.

The Lancers took a 15-9 to begin the first quarter, but the absence of the Lancers’ big man showed at the end of the quarter when Euclid controlled the glass and went on a 6-0 run.

Euclid senior forward Duron Ramsey drained a pair of free throws to go ahead 18-16 in the second quarter but the Lancers responded when senior forward Lucas Grover knocked down a pair of corner three-pointers.

The teams traded buckets until Gilmour created some separation by going on a 17-3 run to take an 11-point lead at halftime.

Knowing that the Panthers liked taking three-pointers, the Lancers went to a zone defense and enticed Euclid to take long three-pointers. Gilmour did a better job at boxing out and collected the long rebounds to limit the Panthers’ offense to one-and-done shot opportunities.

Junior guard Dorjan Flowers and Rose keyed the Lancers’ run by combining for 12 points in the second quarter.

Rose continued sparking Gilmour’s offense at the beginning of the second half by nailing a three-pointer off an assist from senior forward Nathan Nootbaar. The Lancers surged to a 49-32 lead in the middle of the third quarter.

The 6-foot-3 guard finished the game with 14 points, 11 rebounds, one assist and three blocks.

“Brandon got his hand on a lot balls down there,” DeCrane noted. “He high-pointed a lot of rebounds especially in the second half. He got through other Euclid arms to grab the ball and possess it.”

Although Rose fueled Gilmour’s run, DeCrane decided to take him out and give him a rest. Euclid then scored seven unanswered points to trim Gilmour’s lead to 49-38.

Panthers’ junior guard Xavier Vann sparked the comeback by scoring six straight points by driving into the heart of the paint.

The four-year coach admitted he knew he was taking a risk by taking Rose out.

“What happened was when we played Kenston on Dec. 24, I thought Brandon had an unbelievable first half and got tired,” he explained. “When Brandon missed a dunk I felt I needed to give his legs a rest now so he had a whole fourth quarter to play hard.”

Once Rose returned, Gilmour’s offense awakened and the Lancers held a 54-43 advantage at the end of the third quarter.

Euclid scored seven unanswered points to begin the final period trimming the Lancers’ lead to just four points. Flaherty gave Gilmour a jolt by draining three triples to push the Lancers out to a 68-58 lead near the end of the fourth quarter.

“I didn’t have a great shooting game last game,” said the 6-foot-0 senior guard. “Coach DeCrane told me to keep shooting so I kept shooting and made a couple of threes at the end so that was big for our team.”

According to DeCrane, Gilmour showed a lot of resiliency in the wake of not having Mueller.

“It means a lot going forward,” he said. “They’re gaining confidence with major minutes against good quality teams on the road. I’m excited for the next month of January for us.”

Gilmour will travel to Chester to take on prep school rival Hawken at the Red Gym on Jan. 7 at 7 p.m. then go to Lyndhurst to face Brush on Jan. 8 at 4:15 p.m.