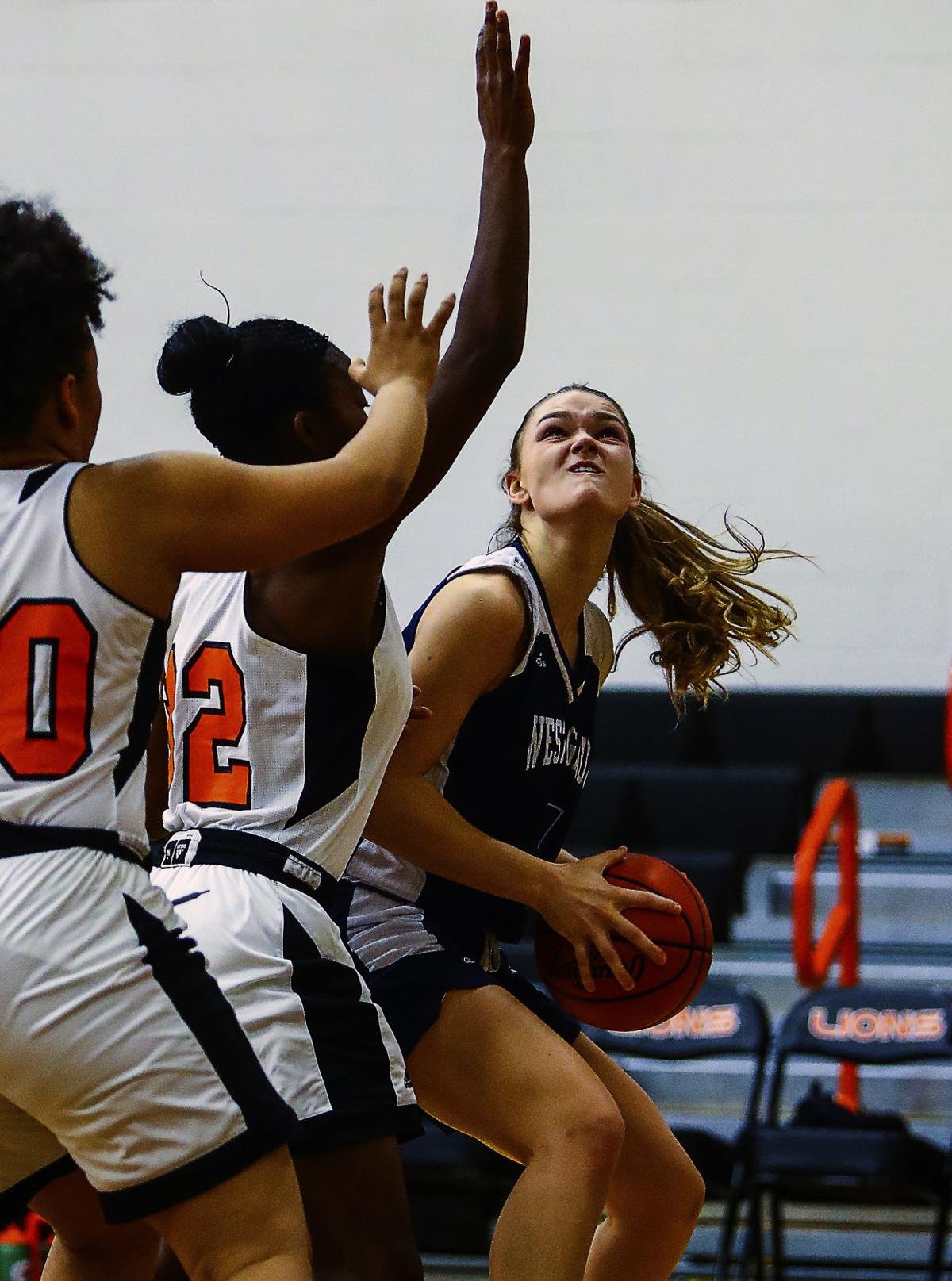 West Geauga 6-foot freshman Alexa Hocevar (right) eyes the iron from the post against the defense of Orange senior Jesseca Hudson-Turpin during the Lady Wolverines’ road victory, 71-49, on Saturday in Pepper Pike. 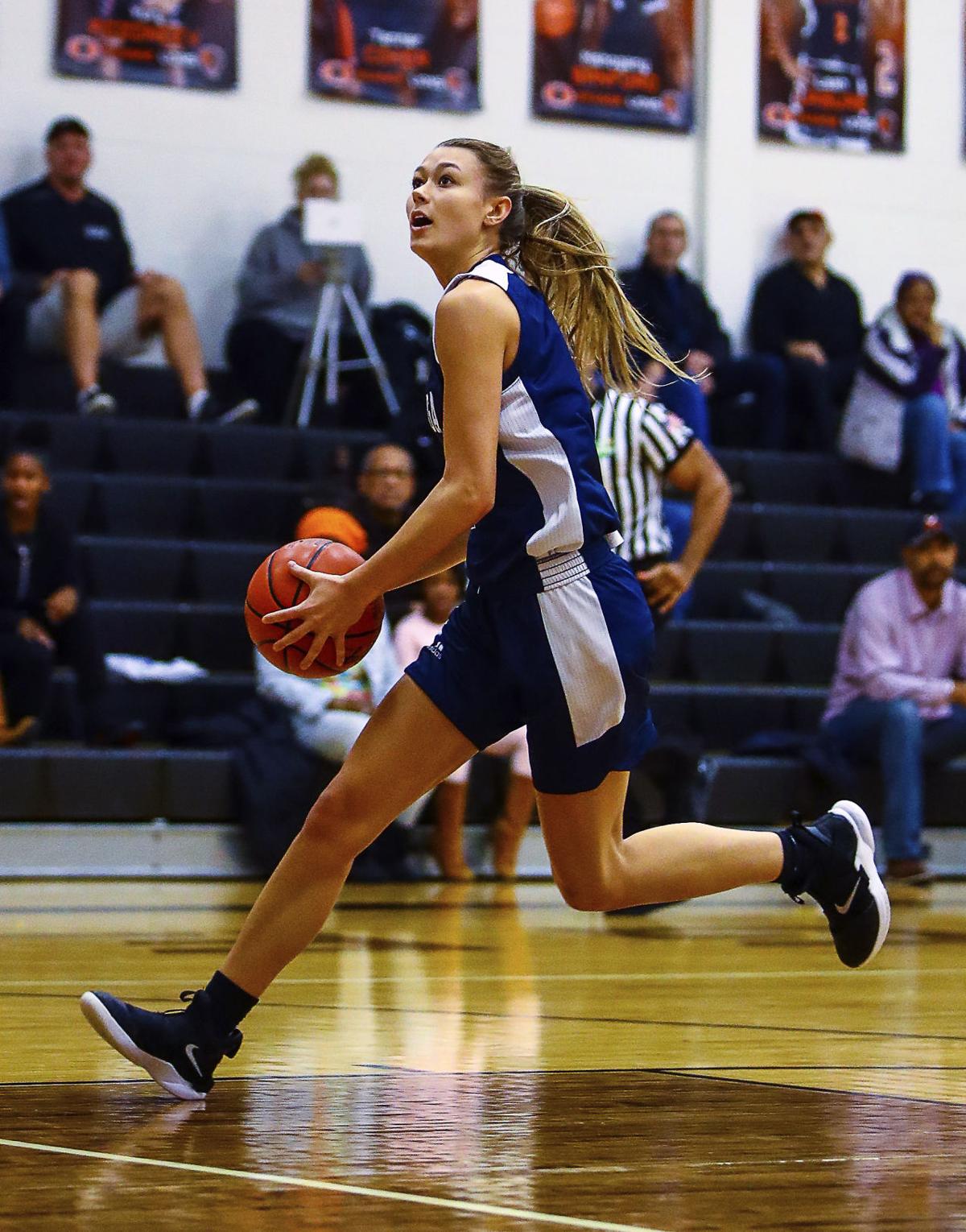 West Geauga 6-foot-1 junior Athena Hocevar goes uncontested to the bucket on a fast break during the Lady Wolverines’ road victory, 71-49, in Chagrin Valley Conference hoops against Orange on Saturday in Pepper Pike. 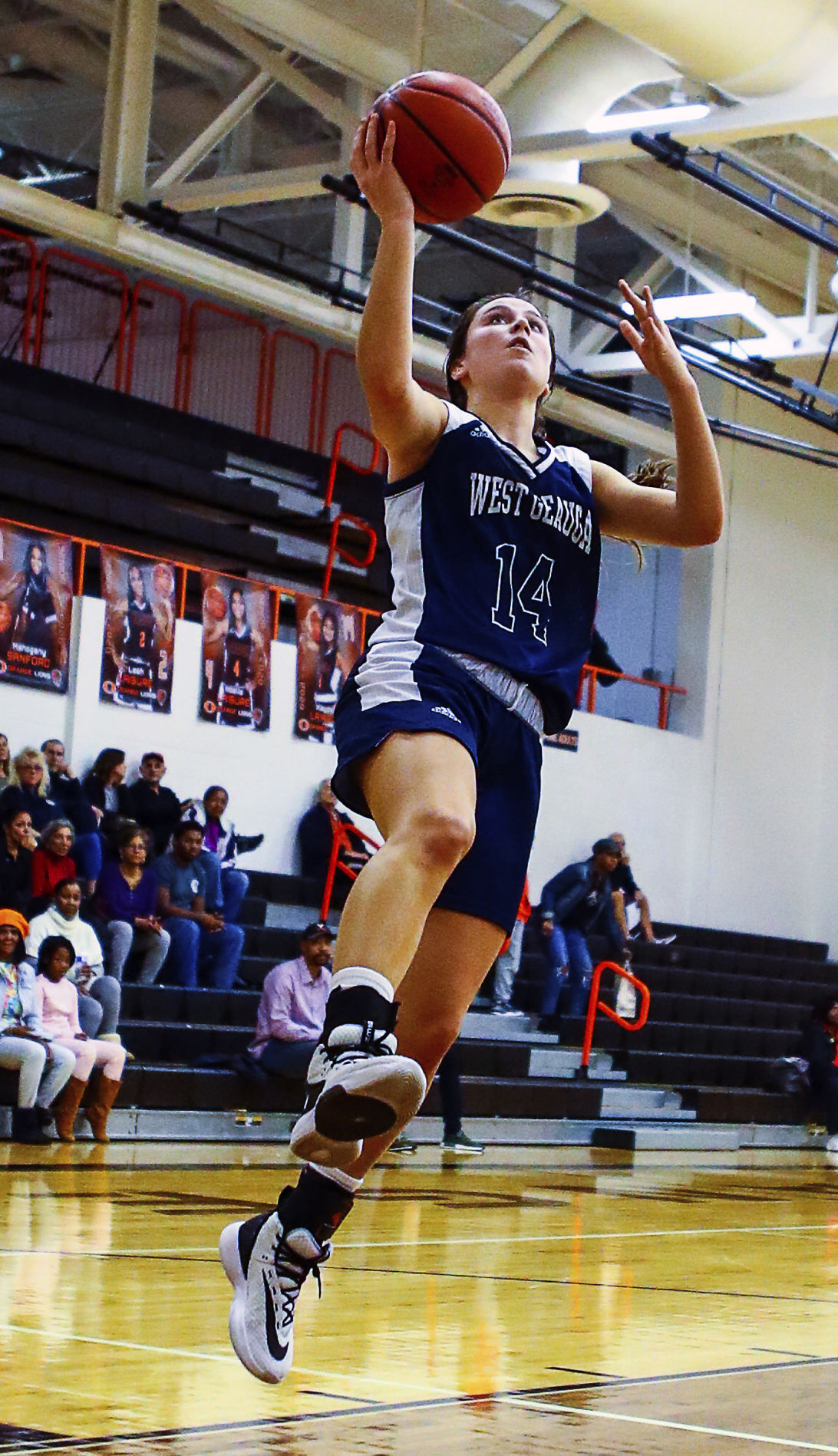 West Geauga 6-foot freshman Alexa Hocevar (right) eyes the iron from the post against the defense of Orange senior Jesseca Hudson-Turpin during the Lady Wolverines’ road victory, 71-49, on Saturday in Pepper Pike.

West Geauga 6-foot-1 junior Athena Hocevar goes uncontested to the bucket on a fast break during the Lady Wolverines’ road victory, 71-49, in Chagrin Valley Conference hoops against Orange on Saturday in Pepper Pike.

The host Lady Lions’ big three actually outscored West Geauga’s big three, 45-42, but the Lady Wolverines took care of business with their fourth and fifth options as well as a dozen points off the bench to improve to 12-2, including a 7-0 mark in the league, with eight games remaining in the regular season.

Since then, the Lady Wolverines have won four straight, including a pair of tournament games in Pennsylvania, a throbbing of Beachwood, 94-19, on Jan. 8, and the road rout against Orange on Saturday.

“Kaydan (Lawson) is a very respectable player, so we just had to make sure that our defense reflected that,” West Geauga 6-foot-1 junior Athena Hocevar said of Orange’s 5-foot-11 senior standout, who is a University of Virginia signee.

“We have one defense where we focus on getting in passing lanes,” Hocevar said. “So, it’s an intense, high-energy system, and we ran it well against Orange. We did have to drop back to our half-court defense, because some of us got into foul trouble, but we were still effective.”

When Orange played West Geauga in the second round of league play last season, Lawson led the Lady Lions to a 59-33 victory behind 21 points, 10 steals, seven boards and six blocks on her game resume.

On Saturday, West Geauga held the reigning CVC MVP to 13 points in large thanks to the defensive effort of 5-foot-9 junior Nicola Ehrbar, a third-year starter for the Lady Wolverines.

“It was a big task, but I enjoyed it,” Ehrbar said. “She’s a very good player, and so it was fun to test my defense and see what I could do. It was definitely hard, but we managed to do it as a team.”

Orange 5-foot-8 senior Momo Sanford dropped a game-high 19 points, and fellow Lady Lion senior Jesseca Hudson-Turpin got hot from deep for 13 points. Along with Lawson, that trio combined for 45 of Orange’s 49 points.

After claiming a double-digit lead at the quarter mark, 23-11, the Lady Wolverines kept their foot on the gas to command a 46-18 upper hand at intermission.

“We definitely take advantage of our length and agility, especially in that full-court pressure,” the elder Hocevar said. “And it’s really nice to have a tall guard, because we can go from high to high, where my sister is 6-foot also.

“So, she can sit on the post and I can go high to high from her. It’s a nice advantage. It’s difficult for teams to get around us, because we’re quick and long.”

Through 14 games, the elder Hocevar has led the scoring column eight times, while Ehrbar has been the team leader in five games and the younger Hocevar has done it once. But the Lady Wolverines’ offense is more than three players deep.

Munko was in the starting lineup at times last year, especially when Hocevar had to sit out the second half of the 2018-19 season because of transfer bylaws, despite her attendance of West Geauga Middle School.

But Munko was reinserted into a starting role just recently, after 5-foot-11 sophomore Grace Wolfe, an all-Ohioan at Kirtland last season, became ineligible for the second half of this season because of the Ohio High School Athletic Association transfer bylaws.

“It was very sad when we lost Grace,” Ehrbar said. “She’s a wonderful player and so fun to play with and understands the game so well. But Munko has stepped up and has been playing her role, getting rebounds and doing well in the post position. So, we haven’t necessarily lost our stride.”

In the Lady Wolverines’ first game with Munko as a starter, they posted a 50-25 victory against Slippery Rock (9-3), a top-notch program in Pennsylvania, during an out-of-state tournament game on Jan. 4.

The two-game team trip was paramount in getting the Lady Wolverines back in the rhythm of playing well and winning, after those previously mentioned back-to-back losses, West Geauga second-year head coach Bob Beutel said.

“We had a week-long stumble there going into vacation, where we really played poorly, but we got well when we took a trip to (Pennsylvania),” he said. “We played a really good team there and maybe had our best game of the year.”

Off the bench, West Geauga still has the talent and height of 6-foot sophomore Meghan Zebrowski, while 5-foot-6 freshman guard Ashlyn Drayer – the Lady Wolverines’ starting goalie on the soccer pitch – has assumed a role in the varsity rotation off the bench.

“She wasn’t in the rotation in the beginning of the year but has worked her way in,” Beutel said. “It’s one of those things where a kid has to sit (because of the transfer bylaws), and there are other kids who are hungry and working hard. So, she’s getting better every week. And she’s done super. She has a great varsity presence and has handled it extremely well.”

West Geauga was scheduled to travel to take on co-defending CVC champion Perry (10-3) on Wednesday, before the Lady Wolverines return home to host Ashtabula Lakeside (3-10) at 2:30 p.m. Saturday.

After finishing last year’s 11-11 campaign losing eight of their final 11 games, including a first-round playoff exit against Geneva, 57-38, the Lady Wolverines are after more than just a winning mark this season, the elder Hocevar said.

“We’ve got some unfinished business,” she said. “But it’s awesome to have these freshmen come in and other people stepping up with some of the seniors we lost last year. And it’s like a brand-new group. We have one starter, basically, from the end of last year.

“So, we are rebranding ourselves, and we’re hoping to finish with a CVC championship and continue on into the postseason. I think we’re a hard-working group and can work through to achieve our goals.”