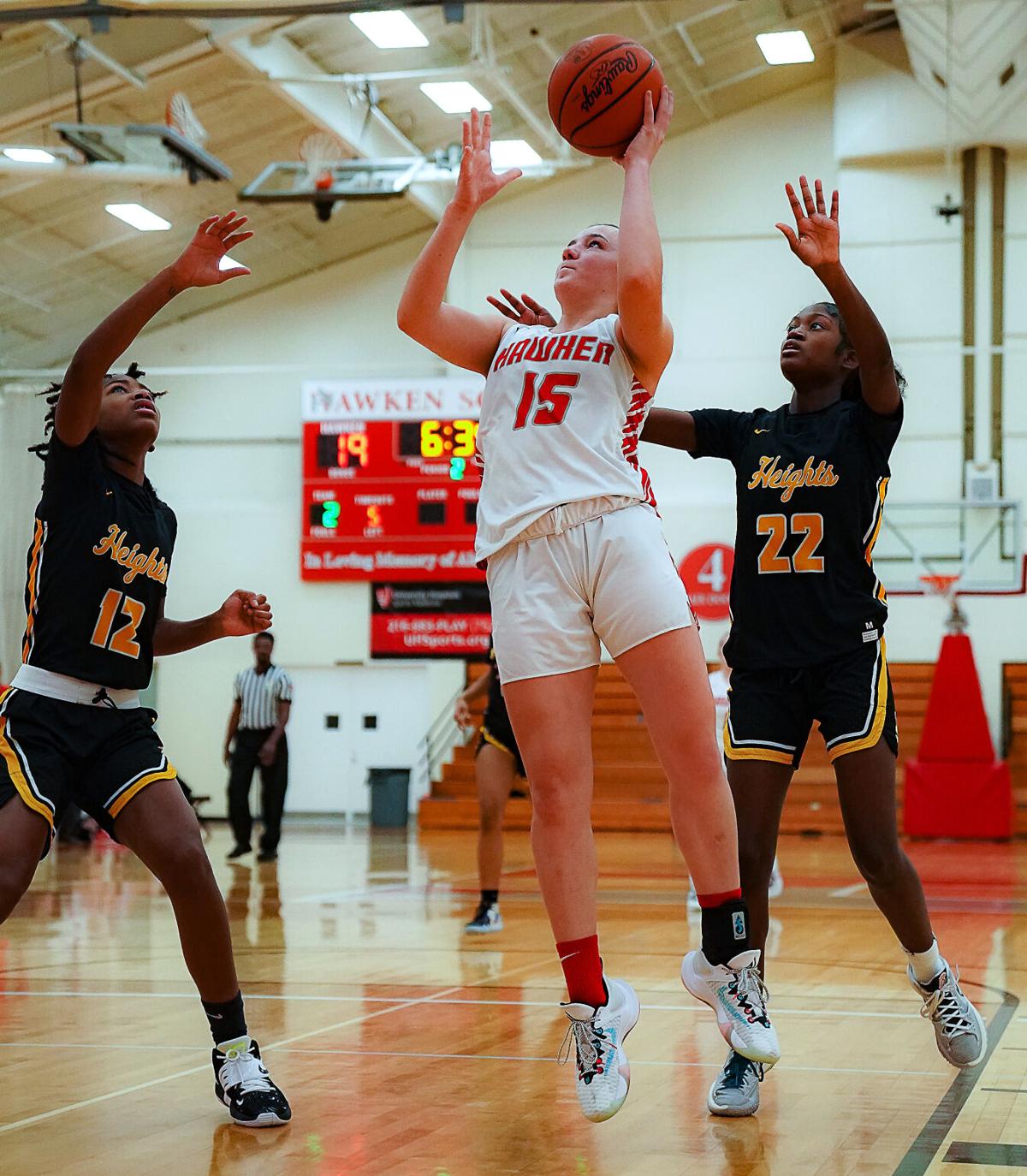 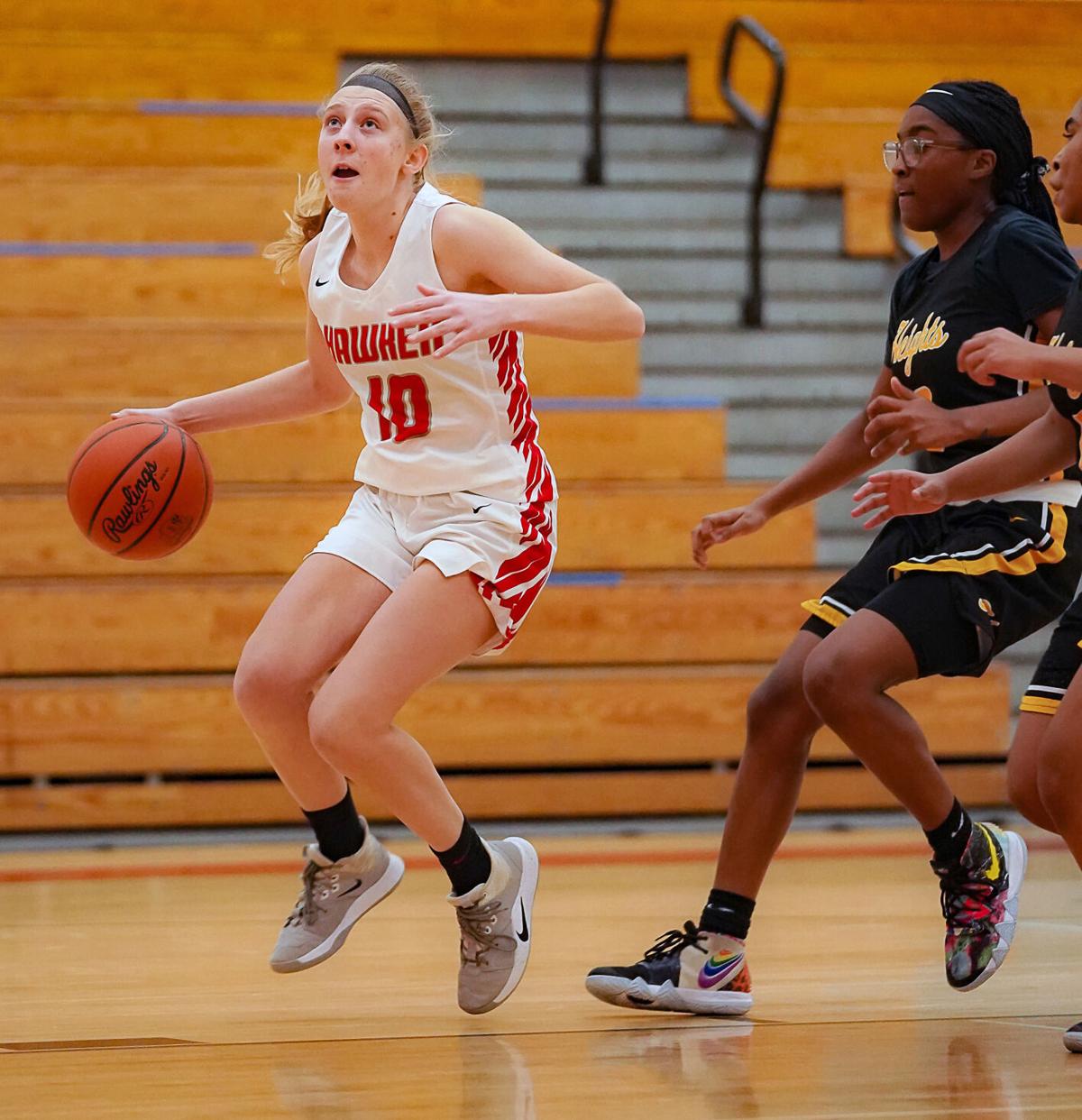 It feels good to be back.

After the Hawken Hawks girls’ basketball team suffered a COVID outbreak, they were shut down for three weeks. The Hawks’ returned to the court and beat Cleveland Heights 45-17 last Thursday evening at Chester.

“It felt great,” said Coach David Murray. “I was excited for the girls. We hadn’t played a game in 20 days so I was anticipating some rust but I was excited the girls were able to go out and compete with their friends.”

According to junior forward Kate Bollinger, it was as if the Hawks (4-1, 1-0) were hitting the restart button.

“A lot of us have played together before,” she said. “It was all about reclaiming out chemistry and getting used to playing again.”

Hawken showed some rust in the first quarter but that did not stop them from racing out to a 13-0 lead. Bollinger and senior guard Juliana Pollard combined for nine points in the opening period.

Cleveland Heights was on the verge of being shut out in the first period until a floater by sophomore point guard Jaiya Gaston gave the Tigers their first points of the game with 1:41 left in the quarter.

The Hawks set the tone defensively and ended the first quarter with a 16-2 lead.

“I thought it was a huge,” said the six-year coach. “Cleveland Heights is a team that I have a tremendous amount of respect for. With the coaches and players they have on that team, to come out and hold them to just two points in that first quarter was really big for us.”

Murray said Hawken knew the Tigers liked running its offense in the post through junior forward Peyton Smith so the Lady Hawks focused on double teaming her as much as possible.

Despite the offense looking shaky, Hawken’s defense did not miss a beat by forcing seven turnovers.

Although Cleveland Heights scored six points, it made only one field goal with the other four points coming from the free throw line and Hawken widened its lead to 26-8 at halftime.

“Defense wins games,” said Hawken senior guard Maya Dori. “Our main goal was coming out with intensity and making sure we had help on Peyton Smith and we came and executed that.”

The 5-foot-8 forward led the Hawks by scoring 19 points and grabbing 12 rebounds.

For a team seeking to defend its Chagrin Valley Conference Chagrin Division title, returning a proficient scorer like Bollinger has been key.

“Not only is Kate a skilled offensive player,” Murray said. “She also works harder than anybody on the court. She’s able to extend a lot of possessions with offensive rebounds resulting in second-chance points. I tell the girls all the time that we can overcome things like turnovers and misses if you work harder than the other time and Kate epitomizes that.”

The Hawks were sloppy with the ball in the final period which led to eight turnovers. Although the offense slowed down, Hawken’s defense continued dialing up the pressure on the Tigers and geld them to four points in the final period.

“We knew there was going to be some sloppiness and rust after having been off for about 20 days,” noted Murray. “It’s just something we’ll continue to work on.”

Hawken’s defense held the Tigers to under ten points in each quarter. Cleveland Heights’ highest-scoring quarter came during the second period when they scored six points.

Having returned eight players from last year’s team, Hawken is feeling good about its chances.

“It’s really exciting,” Dori said. “Our chemistry is there and we’re just continuing to build on it.”

The Lady Hawks will open the New Year by welcoming CVC foe Lakeside to the Red Gym on Jan. 7 for a 7 p.m. tip-off.