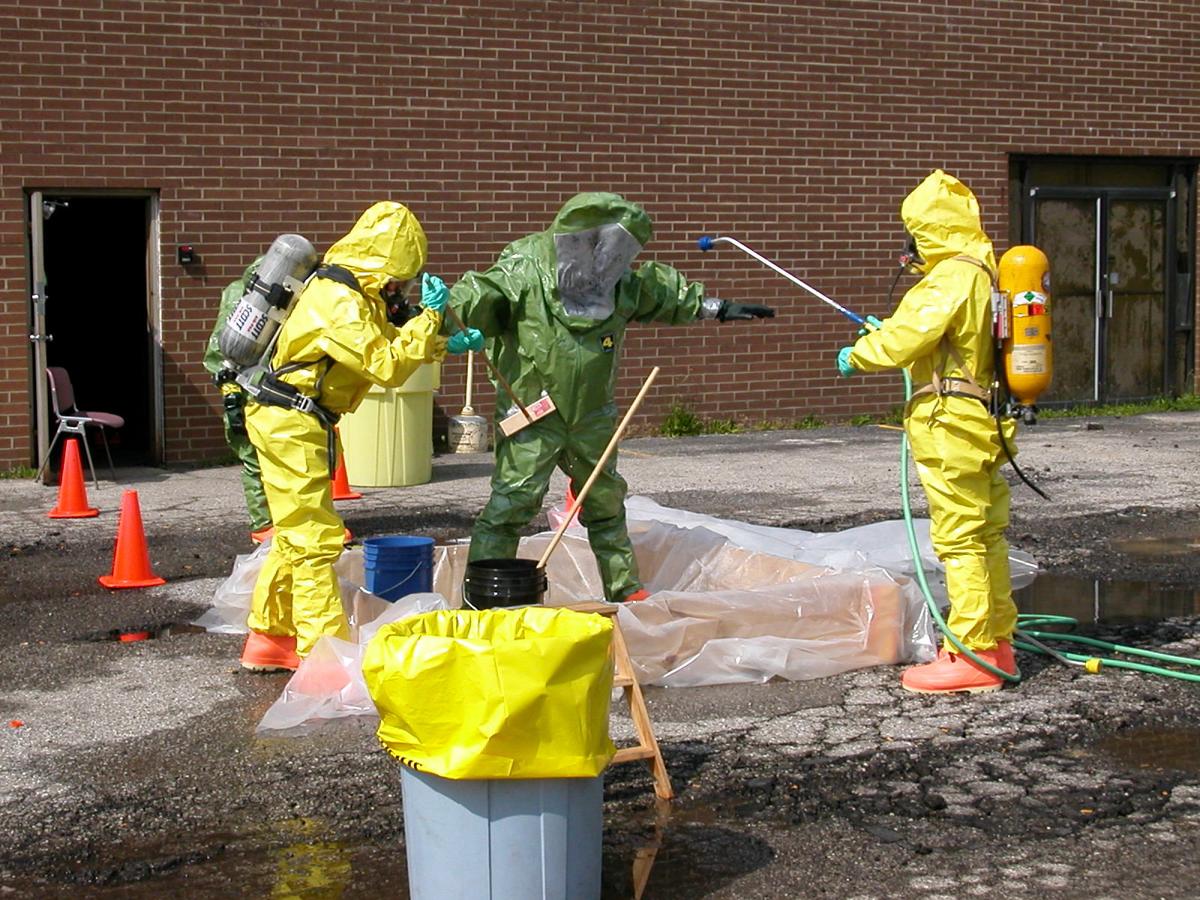 During an actual incident in Solon in May 2003, hazmat team members spray off a member (middle) to decontaminate him after responding inside the building.  In the incident a pressurized drum with chemicals exploded. Responding to such incidents is a major responsibility for the team. 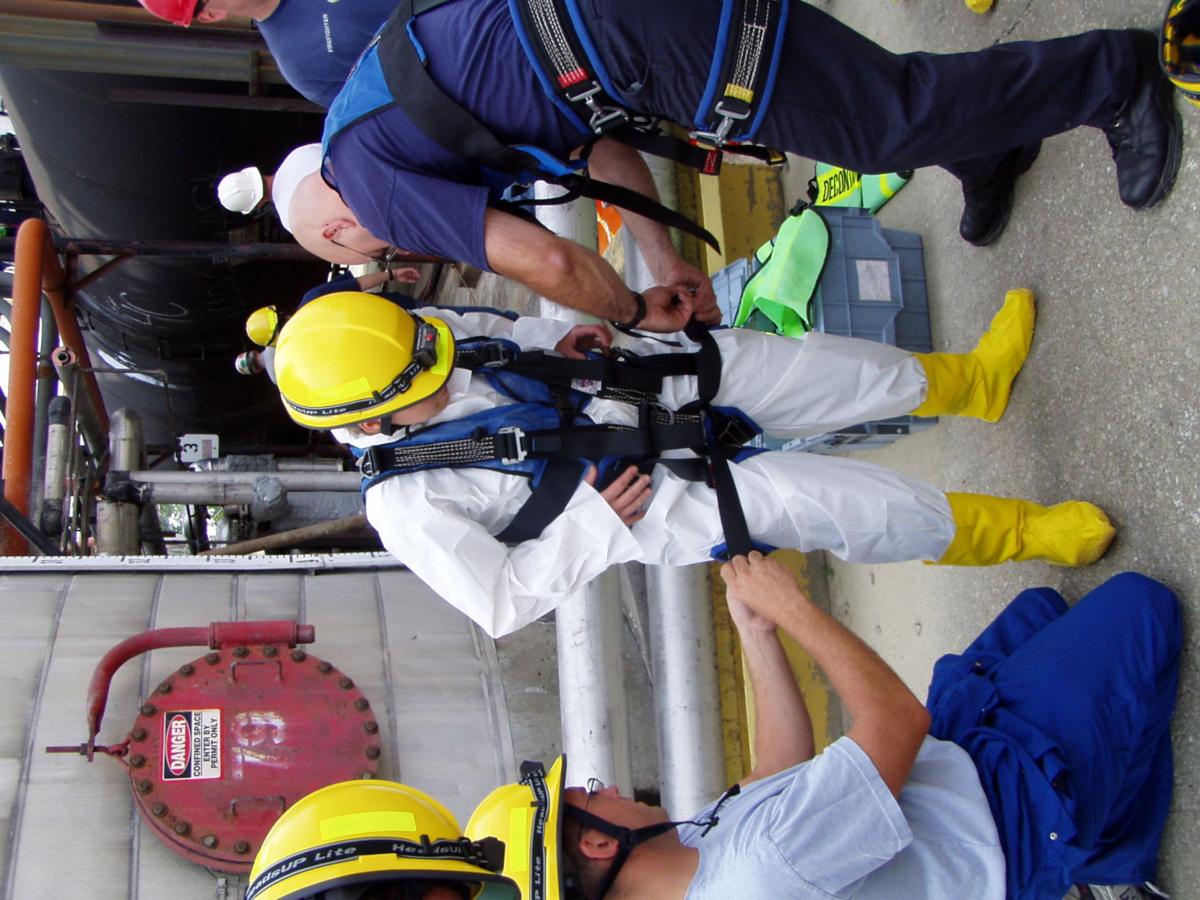 At a training session a hazmat team member is assisted with his harness as part of training for rescues from confined spaces.   The team, which serves and assists local fire and police departments in 33 communities, is currently directed by Mark Vedder, of the Chagrin Falls Fire Department.

During an actual incident in Solon in May 2003, hazmat team members spray off a member (middle) to decontaminate him after responding inside the building.  In the incident a pressurized drum with chemicals exploded. Responding to such incidents is a major responsibility for the team.

At a training session a hazmat team member is assisted with his harness as part of training for rescues from confined spaces.   The team, which serves and assists local fire and police departments in 33 communities, is currently directed by Mark Vedder, of the Chagrin Falls Fire Department.

Regionalism is what the Chagrin/Southeast Hazmat Response Team is all about. Everyone benefits from a small investment that offers great capabilities, said Mark Vedder, director of the team and a Chagrin Falls firefighter. The hazmat team serves 33 communities in the Chagrin Valley and beyond.

“I think it is a good example of working together in high risk events that require a specialized capability,” said Mr. Vedder, part of the team for 28 years. Many residents are not aware of the benefits the team provides for their safety in the event of incidents that involve everything from chemical spills to rescues in confined spaces, he added.

The communities served back then were Bentleyville, Chagrin Falls Village and Chagrin Falls Township, Moreland Hills, South Russell as well as Orange and Woodmere. Since then, Bainbridge and Russell have joined the council of governments and are now part of the team. The Southeast Region included several other cities, including Solon, Bedford, Garfield, Walton Hills and Oakwood Village.

Grants became available for hazardous materials response teams and there was a $75,000 granted from Cuyahoga County in 1990. At that time, the Hillcrest Technical Rescue Team and the Heights Area Special Rescue team took their portion of the grant and contracted with the city of Cleveland to provide services.

In the late 1990s, the city changed the terms of the agreement and increased the fees. “At that time Hillcrest and the Heights regions came to the Chagrin/Southeast team, asking us to provide our services,” Mr. Vedder said. “Today, we provide hazmat services to 32 communities and we cover 387,000 people and 200 square miles. And the Hillcrest and Heights team provides their technical rescue services to the same area, mostly in eastern Cuyahoga County and western Geauga County.”

The area encompasses state Routes 271, 480 and 422, part of Route 90 and all the rail lines in the area. They also respond to all incidents involving industrial and commercial facilities in the communities.

The Chagrin/Southeast Hazmat Response Team’s equipment is stored at different fire stations in the region. The main response vehicle is at the Solon Fire Department’s Harper Road station. One of the main vehicles for confined spaces is at the Orange Village Fire Station on Lander Road. Some of the specialized equipment includes special suits to protect members from the chemicals.

“We respond at the request of local fire and police departments,” Mr. Vedder said. “The local fire department is first and they request us for assistance. The team is called to about 25 calls during the year.”

He recalled one incident when three people were trapped in a gasoline tank in Auburn several years ago and one person died.

Mr. Vedder attended training for explosives involving suicide and terrorist bombings. “Many of our members travel to schools all over the country, including training in biological weapons in Nevada.

“It could be someone mixing the wrong chemicals such as drain cleaners in their homes,” he said of some of the situations that occur. “We respond to industrial fires and overturned trucks involving chemicals and train derailments.

“We also respond to mercury spills in a business or a doctor’s office,” he said.

Mr. Vedder recalled the fire in 2014 on Thanksgiving Day in Maple Heights in a refrigeration warehouse with chemicals and a fire. The team also responded to a chemical explosion at an industrial facility in Maple Heights last fall and an overturned gasoline truck on Route 44 in Newbury a few years ago.

“We stop the emergency by confining the spill and containing the product. A contractor is hired to come in and clean up,” he said.

The team also assists police departments with meth labs and identifying chemicals as well as transporting them for disposal. “Our team has neutralizing agents to make them safe.” The chemicals used in making drugs are taken to a storage area at the Geauga County Sheriff’s office until the Drug Enforcement Agency transports them. We work with the Bureau of Criminal Investigation,” Mr. Vedder said.

In 1998, they started training for terrorism events, following attacks in the United States embassies in other countries. “There was an interest in terrorism and how to respond,” Mr. Vedder said. “That started the training in CBRNE, or chemical, biological, radiological, nuclear and explosions. All our members train in those areas, and we are part of a county-wide terrorism response team. There is only one of them in Ohio.”

The mayors meet once a year to review policies and procedures, hiring and to set travel policies for training. They handle all the legal issues as well.

“It’s a great example of regionalism keeping down the cost of government,” Mayor Koons said.

Grant money from the state and federal government is used for equipment and training. “We have a lot of sophisticated equipment because of the grants,” Mr. Vedder said.

“We are always learning. We have to be a lifetime student to be in this field,” Mr. Vedder said.