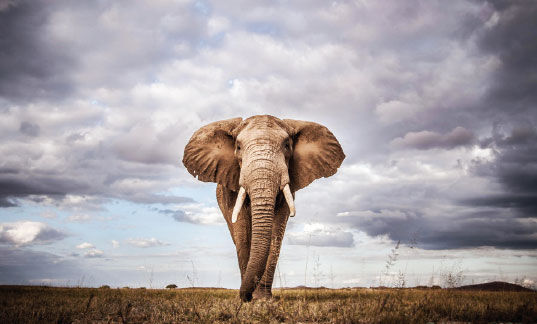 The Chagrin Documentaty Film Festival continues this October, featuring films from 32 countries. “Elephant Refugees,” pictured, by Louise Hogarth is one of the 101 films to be streamed from the comfort of attendees’ homes. The 2020 film features the events in Botswana following the 2014 ban of elephant poaching as the country’s ecosystem struggles to support 60 percent of the world’s elephant population.

“Golda,” by directors Udi Nir, Sagi Bornstein and Shani Rozanes, is a 2019 film that tells the story of Golda Meir and her rise to power as prime minister of Israel and her stature as “queen of the Jewish people.”

The Chagrin Documentaty Film Festival continues this October, featuring films from 32 countries. “Elephant Refugees,” pictured, by Louise Hogarth is one of the 101 films to be streamed from the comfort of attendees’ homes. The 2020 film features the events in Botswana following the 2014 ban of elephant poaching as the country’s ecosystem struggles to support 60 percent of the world’s elephant population.

“Golda,” by directors Udi Nir, Sagi Bornstein and Shani Rozanes, is a 2019 film that tells the story of Golda Meir and her rise to power as prime minister of Israel and her stature as “queen of the Jewish people.”

From the very beginning, the Chagrin Documentary Film Festival was cheerfully christened “the little film festival that could,” and in the years that followed it proved that not only could it succeed but consistently did so for the past 10 years.

This year’s 11th annual edition, a coronavirus-driven all-virtual festival, plans to prove it again when it gets underway on Oct. 6 and continues through Oct. 11. Featured are 101 non-fiction, real story films from 32 countries. “Everybody Has a Story” is the festival theme this year.

To meet health criteria, the festival will be an almost-all virtual outing and available for screens as close as the family room TV, laptop and other electronic devices.

For the cost of a Film Lovers Pass, all films on the schedule may be streamed 24/7 every day of the festival.

Get out, stay in

For those documentary film fans stricken with cabin fever, there will be a unique drive-in theater option on Oct. 8, 9 and 10, thanks to the Chagrin Cinemas rear parking lot which will be transformed to an outdoor, in-car venue featuring three state-of-the-art LED screens 17 feet tall.

Food from local restaurants will be available for purchase during drive-in hours.

The opening night documentary features Jeannette Sorrell and the Baroque orchestra Apollo’s Fire in “Playing with Fire and the Mysteries of conducting.” See it at home or at the drive-in, where space is limited.

The popular salad luncheon is back, drive-in style, on Oct. 8. Boxed lunches will be served. While salads are available at the drive-in only, the short subject films screened that day will be available for streaming anywhere.

Another drive-in and home viewing event includes Awards Night on Oct. 10 during which the jury-chosen winning films in eight categories will be announced. The awards presentation will include pre-recorded video acceptance speeches from the winners. It is free.

Reservations are required for the opening film, salad luncheon and awards night at the drive-in. Call 440-247-1591.

Free of charge, Oct. 9 at 5 p.m. will be Happy Hour with the Filmmakers in a Zoom event, at the drive-in and including 40 documentarians from around the world and gathering virtually for this special and always joyous meet-up.

Those zooming into the virtual Happy Hour will be invited to send questions to the filmmakers.

Also free and open to the public, in real time – Oct. 6 through Oct. 11 – is a series of films which may be viewed outdoors on a large screen in Riverside Park in Chagrin Falls. Start times vary.

Films will include those that bring a smile, ones that have a local angle, some that are sports oriented, others that have a culinary focus and still more that investigate the wonders of planet Earth.

Closing night, Oct. 11, will be festive when CDFF presents a socially distanced Polka in the Park. Bring a mask and cut a rug, or in this case, the grass.

Q & A interview via email.

Reinventing the wheels of the festival was “rewarding,” according to Mr. Owen, and the ideas and volunteer and staff help plentiful.

Question: What was your experience leading the board through the make-over?

Answer: One of the many benefits of being surrounded by some of the most creative individuals in the region, is an endless stream of ideas. What started as creative work-arounds, quickly transformed into final products and additions that will live on with the festival for many years to come. The exceptional board, staff and massive team of volunteers stepped up once again.

Q: Were there moments when you thought  it couldn’t be done?

A: Fortunately, doubt did not play a role in this year’s festival planning. There was a clear path to the development of the festival after our initial creative sessions. Everyone understood that this year’s festival would look different on paper but in reality would accelerate our mission of educating audiences and empowering filmmakers to tell their stories.

A: The end product is world class – this shift has allowed the festival to showcase a greater breadth of films than ever before, in an online platform that rivals the likes of Netflix. It’s truly a great viewing experience.

As an extension to our streaming platform, our films by the falls and drive-in doc series were carefully designed to create the familiar warmth and in-person excitement for those looking for a safe destination experience.

A: We will certainly miss the social comradery with our many supporters and filmmakers that travel to Northeast Ohio from around the world. But with this change comes an incredibly positive movement in our ability to reach viewers far beyond our region.

The end result is a silver lining for the CDFF community. I’m proud to stand behind this year’s festival and excited to enjoy these great films on my schedule, from the comfort of my home.

Festival programs describing the 101 films from more than 30 countries are available at the CDFF office, 49 W. Orange St., Chagrin Falls; all Cuyahoga County Library branch locations; the Geauga County Public Library; Heinen’s in Chagrin Falls; Cowboy Food & Drink and Chagrin Cinemas in Bainbridge along with other locations in the area.

Tickets, passes, gift cards and annual memberships may be purchased as well as the descriptions of each film offered this year are all available by going to www.chagrinfilmfest.org.

Memberships at a variety of levels, beginning at $275, offer various other perks such as extended days, beyond the festival, to view the documentaries and preferred parking at the drive-in and other perks.

Single tickets for specific films are also available. For information, call the festival world headquarters at 440-247-1591.

The impact of the Chagrin Documentary Film Festival goes beyond the art of filmmaking and enlightenment. There is an economic perk.

Chagrin Falls Mayor Bill Tomko, whose eagle eye on village finances is well known, declared the film festival an important economic engine for the village and its retail and restaurant community by drawing visitors downtown to shop, dine and enjoy the ambience. In doing so, the festival and its audience members support the village’s brand as the destination for arts and culture community of the region.

The festival’s notoriety goes beyond the 44022 ZIP code to become one of the best festivals of its kind anywhere. For the past eight years the CDFF has been recognized as one of the 50 best festivals in the world. The accolade comes via MovieMaker Magazine, the go to publication for the film industry.

This year, as Mr. Owen noted, there is the availability of films to be seen around the world by distant pass holders, members and friends of the festival.

The festival is produced by Fevered Dreams Productions, a vehicle through which Chapman film school student David Ponce created for the documentaries he would make. He died of Leukemia before the dream materialized.

Eleven years ago in dedicating the festival to their son, Mary Ann and Ed Ponce re-activated Fevered Dreams through which CDFF is operated and through which it has grown wings. It remains at the heart of the festival and David remains its inspiration.