Free access for current print subscribers
Get Started
You have permission to edit this article.
Edit
Welcome, Guest
Home
Topics
Communities
Schools
Viewpoint
Classifieds
Guide to the Valley
Camp Guide
Contact Us
1 of 6 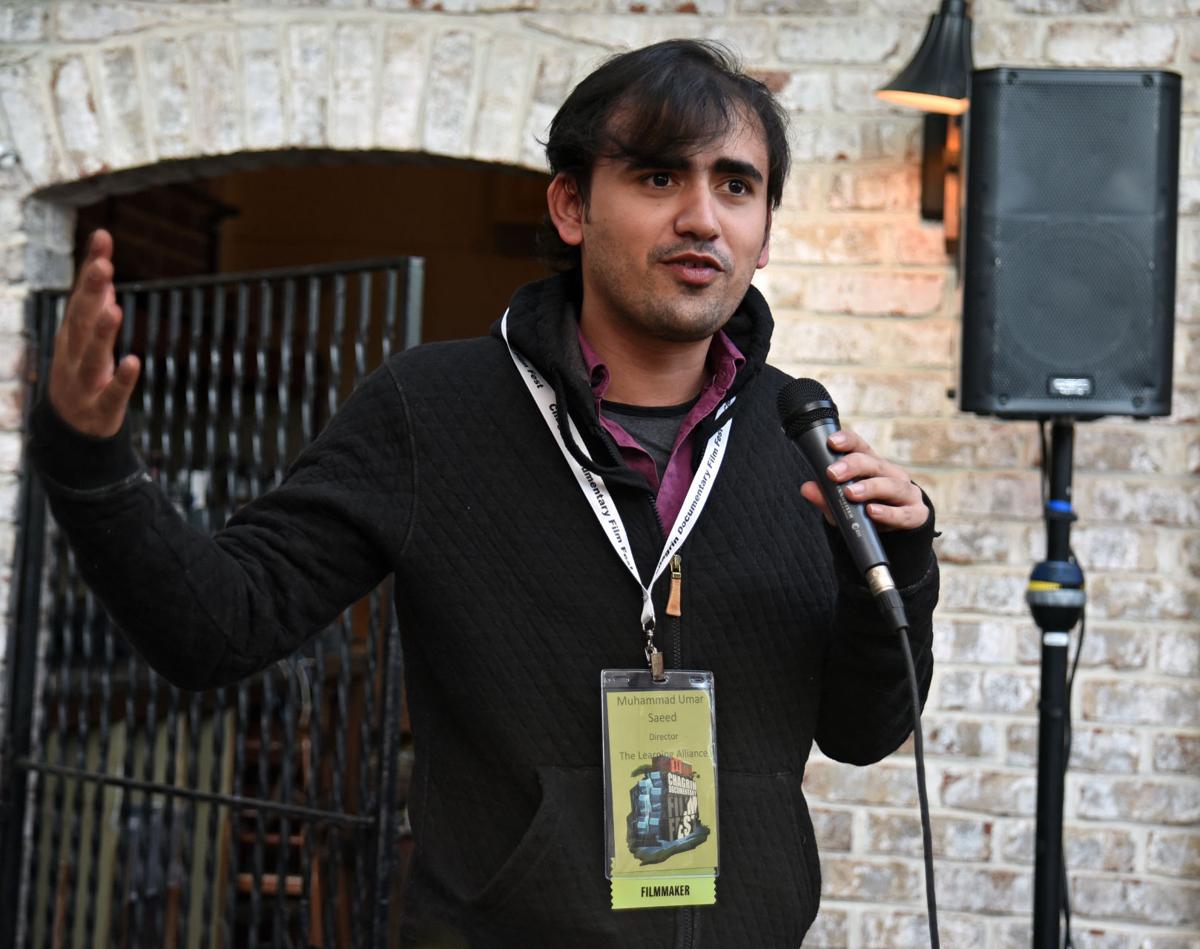 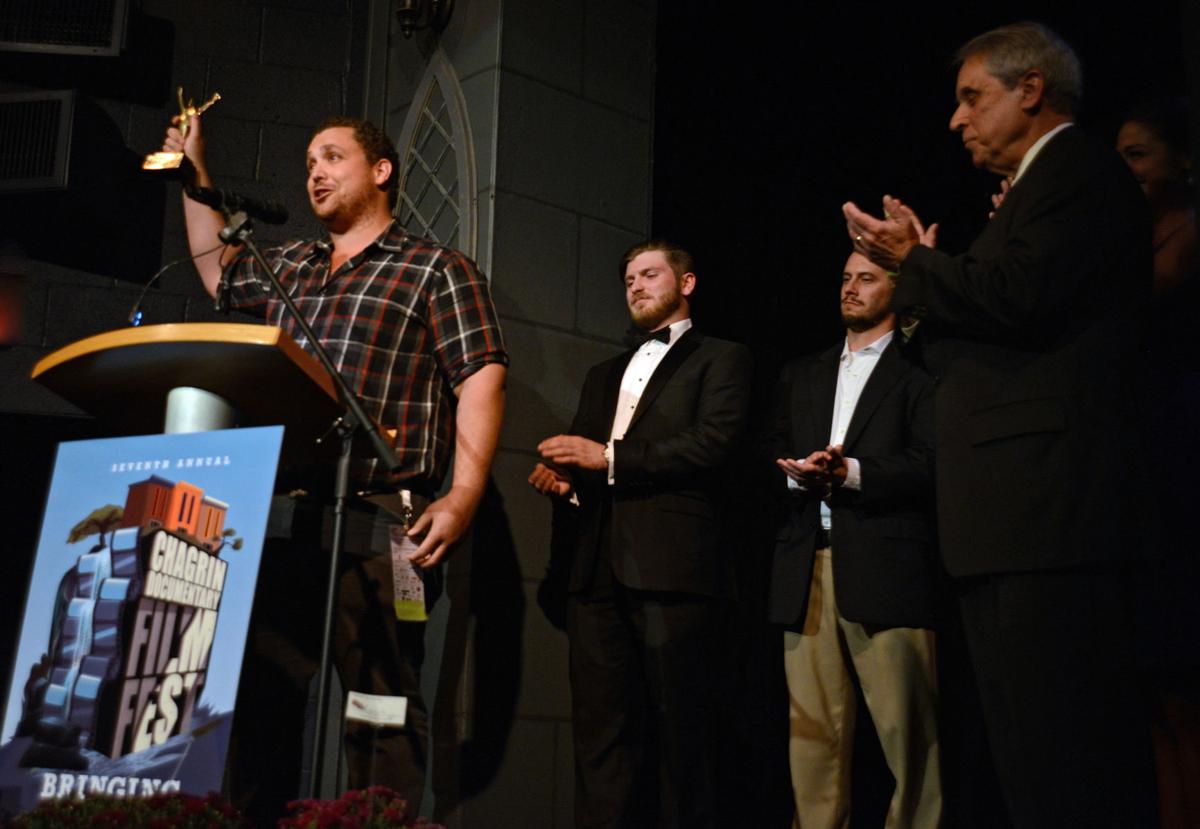 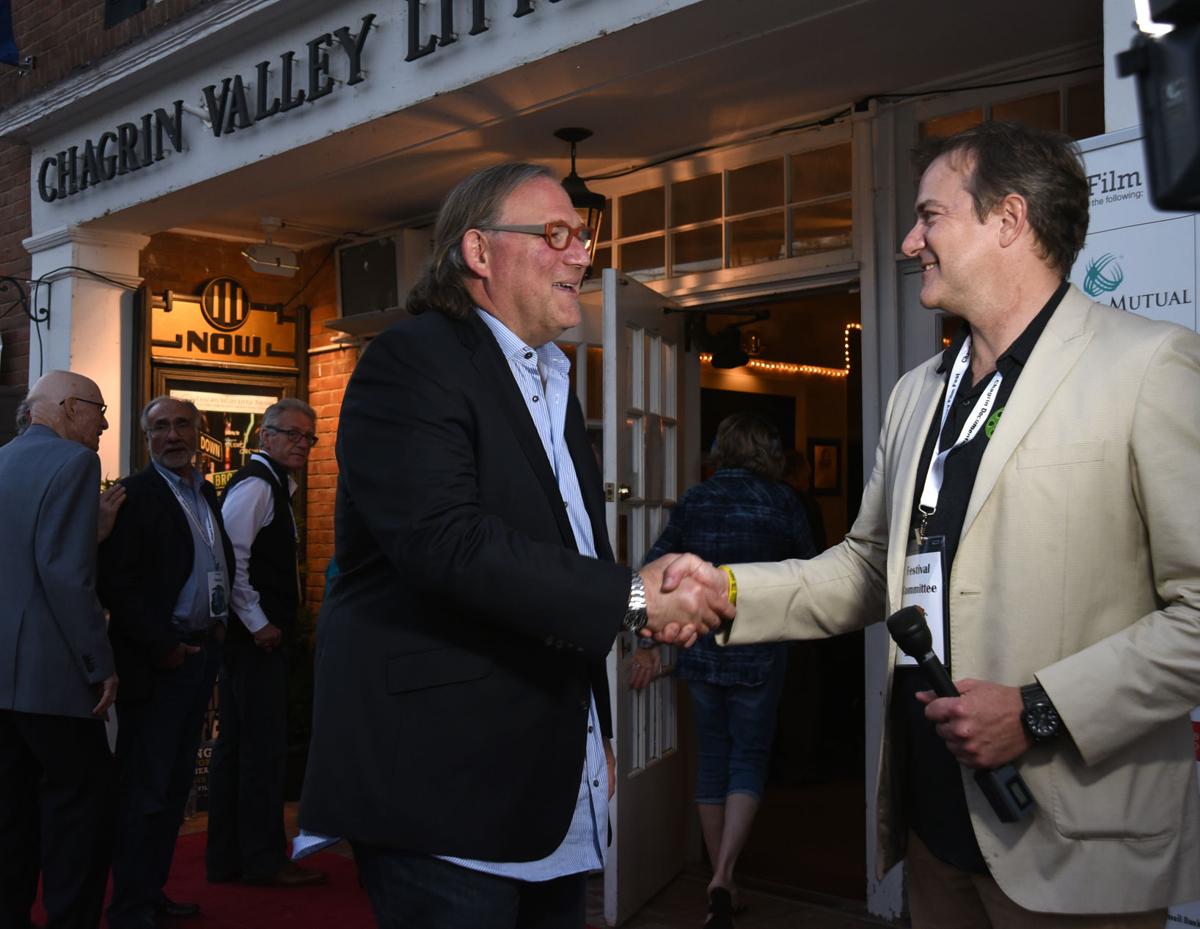 Ivan Schwarz, president and CEO of the Greater Cleveland Film Commission, speaks with Kerry Prior on the red carpet before the opening of  the Chagrin Documentary Film Fest at the Chagrin Valley Little Theater on Oct. 5. 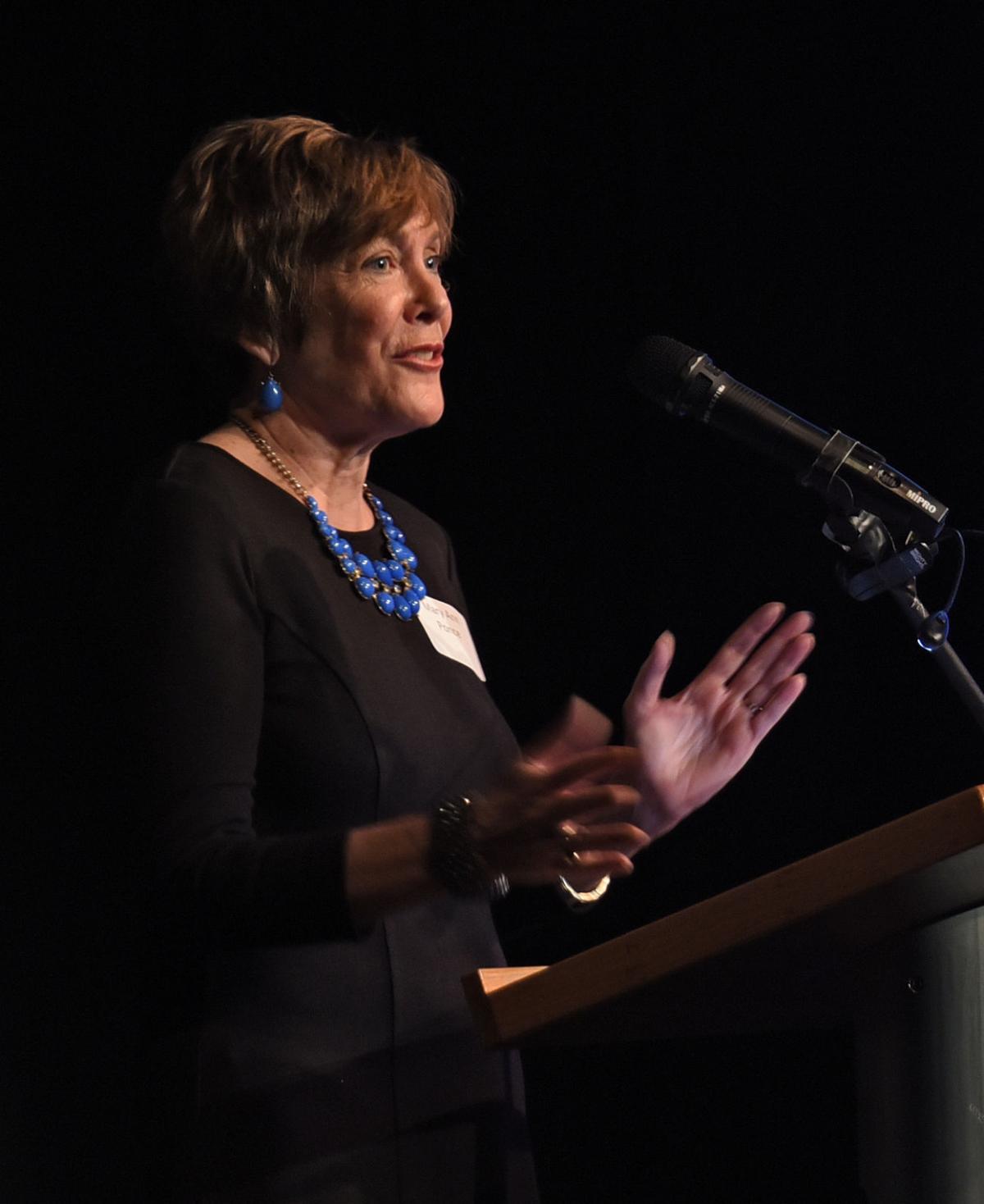 Mary Ann Quinn Ponce, founder and director of the film fest, addresses the audience  at the opening on Oct. 5. She started the event in memory of her son, David Ponce. 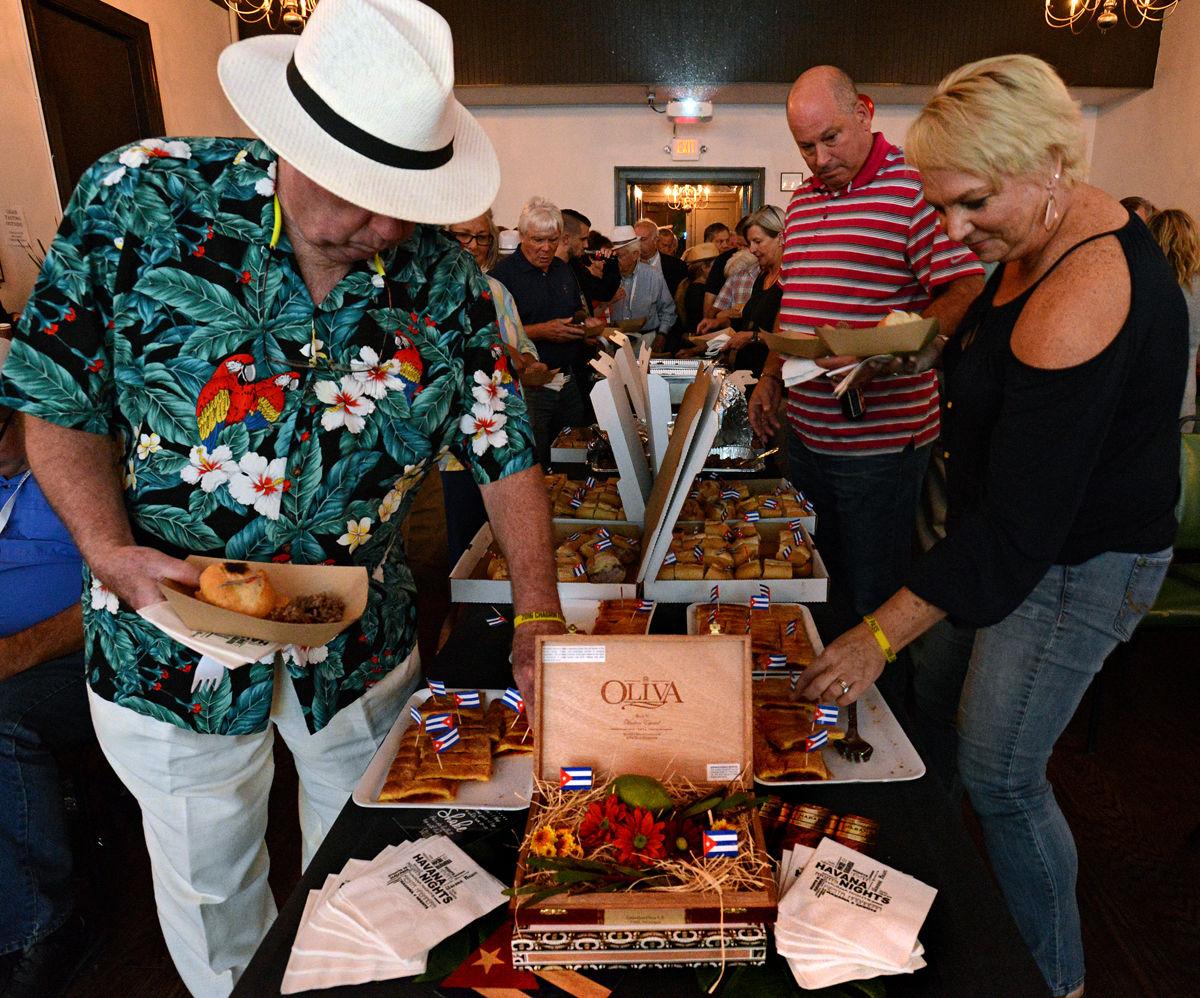 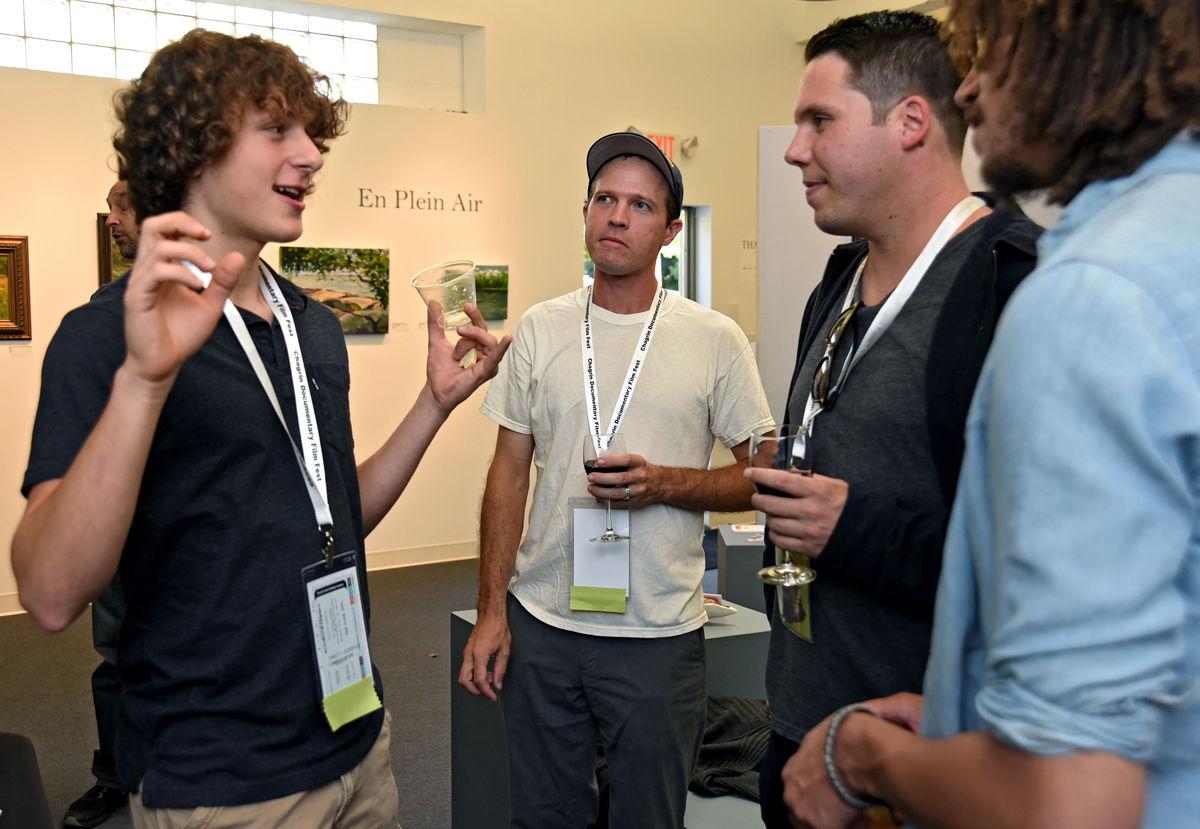 Ivan Schwarz, president and CEO of the Greater Cleveland Film Commission, speaks with Kerry Prior on the red carpet before the opening of  the Chagrin Documentary Film Fest at the Chagrin Valley Little Theater on Oct. 5.

Mary Ann Quinn Ponce, founder and director of the film fest, addresses the audience  at the opening on Oct. 5. She started the event in memory of her son, David Ponce.

The awards evening was presided over by Loree Vick, former TV personality now with Summa Health System. She joked about not wanting a flu shot to ward off film festival fever.

In a head-to-toe sequin gown, Ms. Vick not only added glamour to the evening but her easy, charming commentary kept the party moving gracefully as she ushered presenters and winning filmmakers on and off the stage.

The youngest chaps to tread the red threads were Patrick and Wyatt Davidson, sons of film producer and one of the evening’s presenters Tyler Davidson, a born and bred Chagrinite.

The “local boy made good”  was once put into the category of LeBron James of film for keeping the movies he makes - and the money they produce  - in Northeast Ohio.

It was longtime festival supporter Dewey Forward who summed up the festival experience best.

“I am just so proud with what’s going on with this festival,” the owner of the Popcorn Shop said. “There is a world view here we are not used to in our little bubble and that’s a good thing.”

“Of course we love all of our visitors who allow us to show off Chagrin Falls and Mary Ann (festival founder) and (her husband) Ed Ponce who bring these filmmakers here from all over the world and who make us laugh, cry, feel, think,” she said.

“I’m in a business that is losing its influence in the world but documentaries continue to tell the stories,” he said.

“Accidental Courtesy: Daryl Davids, Race & America,” the David Ponce Best of the Fest top award winner, was among 10 cash prize winners made possible through a $15,500 gift from an anonymous donor. It marks the first year the festival has presented monetary awards along with its statuettes. This film earned $5,000.

“We were so stunned by the generosity of our anonymous donor and our hope is someone who loves what this festival does might consider doing the same for the future,” festival founder and Director Mary Ann Ponce said.

Her son David Ponce, a young documentarian who died of cancer at the age of 20, inspired the festival and the top award named in his honor.

Mrs. Ponce did not speak at the awards ceremony but later reflected on the evening and how “Accidental Courtesy” measured up to the description of what the David Ponce Best of the Fest Award should be. It had to do with her son’s belief that the human spirit is capable of anything.

“Accidental Courtesy” tells the story of accomplished R&B blues musician Daryl Davis who during his travels for work, befriends KKK members and encourages dialogues on their beliefs. Many end up leaving the Klan, giving their robes to Mr. Davis who wants to eventually put them on display in a museum.

Mrs. Ponce referred to a passage in a letter David wrote about incurable diseases in which he said that the can-do spirit was present “even when faced with something immensely dark and frightening.”

“That is very much what this film demonstrates and I think David would agree,” Mrs. Ponce said. “He loved a quirky twist and this film has that - a black man reaching out to the KKK.”

Director Matthew Ornstein shows that not everyone agreed with Mr. Davis‘ hobby to seek out KKK members. The director did not look away when the musician was confronted by angry members of his own race who vehemently oppose his KKK friendships.

Others sworn to prosecute the Klan go on camera to argue against Mr. Davis’ approach, saying he doesn’t see the big picture.

The top award for this year’s festival was presented by cousins of the late David Ponce, Joe and Brendan Quinn, and half-brother Dan Calonge.

Brendan Quinn said that award named for his cousin was not so much  “a resolution to David’s story” but one that “never has to end.”

In accepting the award, Mr. Ornstein thanked “this wonderful town and wonderful festival.” He assured Mr. Douthit that newspapers were not dead.

“This film came from a print article,” said Mr. Ornstein who learned about Mr. Davis from reading a story in newspapers. “Journalists are our first responders.”

Mr. Ornstein then told the audience that Mr. Davis continues to believe he can make a difference in the world and reminded them they can too.

In keeping with the theme of his film he said, “We have an election coming up and one of the candidates was endorsed by a white supremacist and one was not, so please think about that.”

Near and dear to the heart of the festival is the Mary Lerner Spirit Award, named for a festival stalwart who screened hundreds of films and served as Mrs. Ponce’s right hand. Mrs. Lerner passed away last year.

“It was so important to me to do something that Mary would have liked, that reflected what a remarkable human being she was and the impact she had on me personally,” Mrs. Ponce said.

“I have missed her so much this year but so many times during the planning would stop and ask myself what she would think of this film or that event. Her spirit continues to live through so much that we do.”

Making the $1,000 award presentation was Mrs. Lerner’s Husband Bernie Lerner and her friend Darby Scott who said of her friend, “Nothing pleased Mary more than helping others reach their potential” and added that her association with the film festival was providential.

“It was the universe that brought Mary (Lerner) and Mary Ann (Ponce) two dynamic women together.”

Recipient of the award was the film “Hollywood Shorties” and its director Ryan Green.

He spoke to the festival audience on video from California thanking everyone for their support and revealing the film about a group of little people taking on the game of basketball seriously with skill and good humor was inspired by his uncle, an original member of the team.

The Emerging Film Maker Award with a cash prize of $2,500 went to “Following Seas,” directed by Tyler Kelley and Araby Williams. Mr. Kelley accepted the award and dedicated it to Nancy Griffith who shot all of the footage for the film depicting the decades she and her husband lived aboard a 53-foot sailboat  where they raised their family.

She passed away during production of the film and her burial at sea is shown in the final moments as a fitting conclusion to the story of a life lived almost entirely on the water.

The seven remaining awards each carried with them $1,000 cash awards. They are:

Best International Documentary – “Kandahar Journals”directed by Devin Gallagher and Louie Palu. Mr. Palu accepted in person thanking “the Ponce Family for creating something that honors what their family loves.”

Best Local Documentary -- “Good Luck Soup” was directed by Matthew Hashiguchi. But his grandmother Eva Hashiguchi, the subject in the film, came on stage to accepted for the director who could not attend.

Best Environmental Documentary –  “Atlantic,”  directed by Risteard O’Domhnaill. The award was accepted via video from Ireland by producer Marie-Therese Garvey who charmed the audience with her Irish brogue and a homemade sign she held up stating “We heart Chagrin Falls.”

Best Social Awareness-- “Off the Rails” Directed by Adam Irving.

Each year the Rotary Club of Chagrin Valley presents its own Service Above Self Award to the film which best exemplifies the spirit of those words. This year’s 1,500 prize was presented to “Kilimanjaro Warriors” directed by Bevan B. Bell who told the audience his climb with veteran amputees, many with ill-fitting prosthesis “was the most changing experience of my life. They proved me wrong every day. When you see them please shake their hands.”