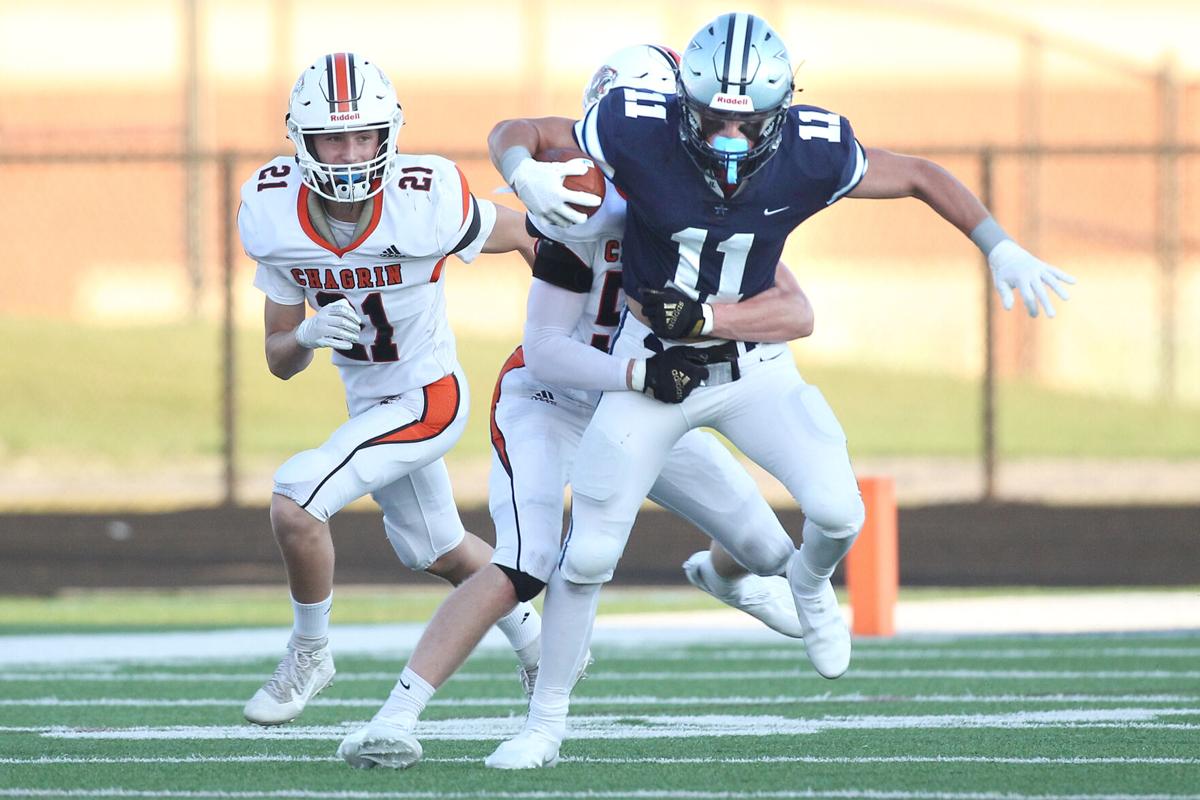 Kenston senior wideout J.P. Germano tries to shake off a tackle by Tigers’ junior linebacker Grant Sellars and pick up a couple of extra yards in the Bombers’ 35-0 rout of Chagrin Falls last Friday night in Bainbridge Township. 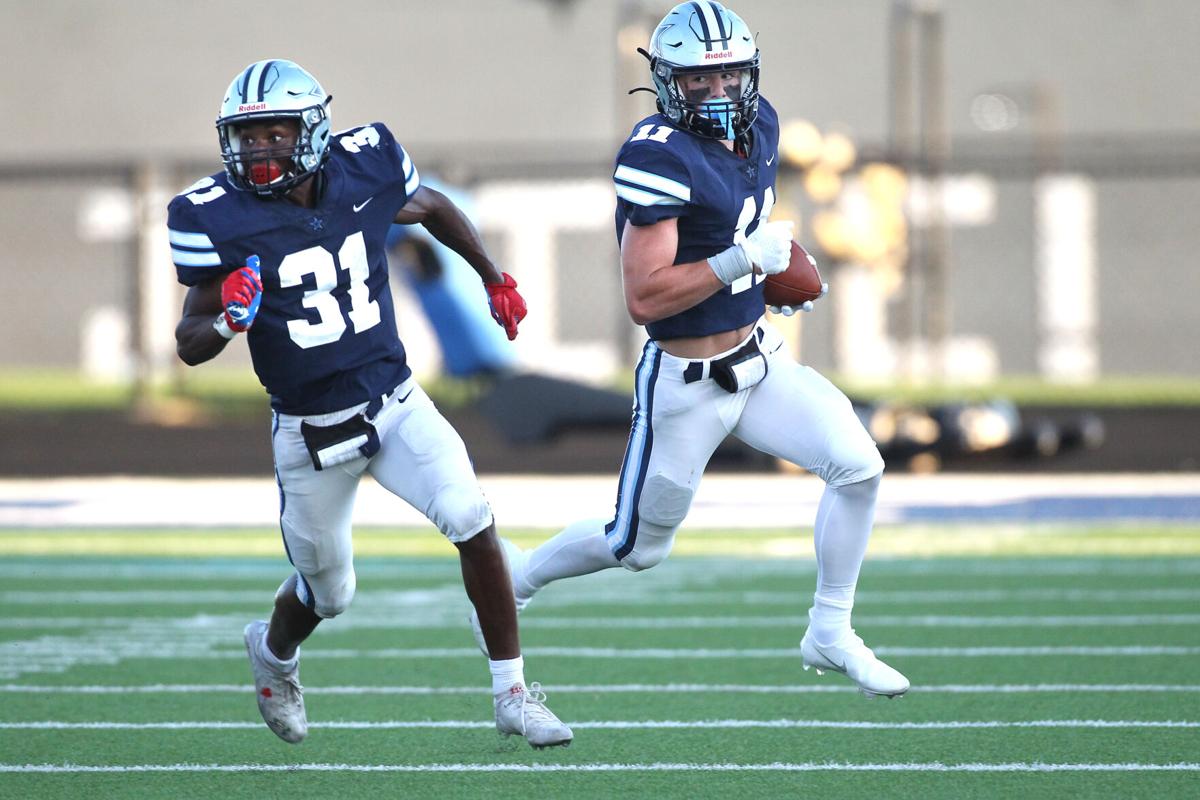 Kenston sophomore tailback Sean Patrick (31) looks to make a block to pave the way for J.P. Germano (11) at Kenston Bombers Stadium. The Bombers’ offense was clicking on all fronts in a 35-0 victory over crosstown rival Chagrin Falls.

Kenston senior wideout J.P. Germano tries to shake off a tackle by Tigers’ junior linebacker Grant Sellars and pick up a couple of extra yards in the Bombers’ 35-0 rout of Chagrin Falls last Friday night in Bainbridge Township.

Kenston sophomore tailback Sean Patrick (31) looks to make a block to pave the way for J.P. Germano (11) at Kenston Bombers Stadium. The Bombers’ offense was clicking on all fronts in a 35-0 victory over crosstown rival Chagrin Falls.

It seems that things are finally getting back to normal.

After fighting through a 2020 season riddled with inconsistency and unpredictability, the Kenston Bombers football team kicked off their 2021 season by firing on all cylinders to defeat crosstown rival the Chagrin Falls Tigers by 35-0 score at Kenston Bombers Stadium last Friday evening.

“There’s no better way to start the season,” said Kenston head coach Jeff Grubich. “I have a lot respect for those guys over there. I got into high school football for these kinds of crosstown rivalries. It’s fun.”

The Battle of 422 was not played last season as most high schools only played conference games because of COVID.

Last year was just the seventh time in the course of a 62-year rivalry in which the two teams did not meet.

Kenston made its presence felt on its first drive of the game.

Bombers’ junior quarterback Nikko Georgiou entered the contest with just seven varsity games of experience under his belt from last year, but the 6-foot-1 quarterback looked very polished on the opening drive.

He completed four out of five passes for 69 yards and capped things off with a shovel pass to freshman wide receiver Tymir Cardona who scampered 28 yards downfield for Kenston’s first touchdown.

“We pushed Nikko all winter long,” said the 10-year Kenston coach. “He dedicated himself to the weight room and film study and his hard work paid off. He put the time in and earned everything he got out here.”

The Bombers capitalized on the field position and needed just two plays to push its lead to 14-0 on a five-yard touchdown scamper by sophomore tailback Sean Patrick.

The 5-foot-9 sophomore running back totaled 101 yards on 19 carries, one rushing touchdown and hauled in two receptions for 14 yards.

“Sean is slippery,” Grubich said smiling. “You can’t measure how fast he is. You talk about track speed and all that good stuff. He’s got football speed and that’s kind of the speed you really can’t measure with the side to side movement.”

It was a challenging start to a new era of Chagrin Falls’ football. The Tigers entered the season only returning five varsity starters and also have a familiar but new face at the coaching position.

After 26-year coach Mark Iammarino announced he was stepping down as head coach at the end of last season, defensive coordinator John Scott was named his successor.

Scott served as interim coach for one contest last year when Iammarino could not fulfill his coaching duties due to COVID protocols, but Friday evening’s game marked his first official game as head coach.

“Kenston had a lot returning starters and we don’t have a lot of numbers at the varsity level,” said the first-year Chagrin Falls’ coach. “That was my biggest concern going in to see if we would be able to play for 48 minutes conditioning wise. That proved true as we had a lot of cramps and some guys got dinged so we had to rely on guys that would normally be reserves for Saturday.”

Chagrin Falls had a chance to turn the tide in its favor late in the first quarter when the defensive line swarmed Georgiou as he rolled to his right trying to find an open man.

A Tigers’ defensive lineman got his hand on the ball and junior linebacker Grant Sellars secured the deflection.

Chagrin Falls’ celebration was short lived as no sooner did the Bombers give the ball away, they took it right back when Tigers’ junior quarterback Nicholas Vinci sailed a pass that went right into the hands of Bombers’ junior defensive back Logan Toft.

“That was huge,” noted Grubich. “You look at momentum shifts and that was a big swing in our favor right there and that’s a credit to the defense. We’ve been practicing takeaways and interception drills left and right and those guys were able to get it done.”

Kenston leaned on its offensive line to open up running lanes for Patrick and Georgiou made the Tigers pay for giving the ball back as he delivered a nine-yard touchdown strike to junior wide receiver J.P. Germano.

That took the wind out of Chagrin Falls’ sails which totaled just 136 yards on offense.

Aside from the interception in the first quarter, Georgiou put together a strong season opening performance, completing 17 of 27 passes for 250 yards and four touchdowns.

Georgiou credited his big night to the help of his wide receiving corps. While the Bombers’ junior quarterback does not have a lot of varsity experience under his belt, he is aided by a talented group of receivers highlighted by senior tight end and Indiana University commit Ryan Miller, senior wideout Carson Rivera-Gebeau, Germano, and Cardona.

“They’re all athletes,” said Georgiou. “You can trust them with anything. They all run incredible routes so I can trust them and they will make plays for us.”

The Bombers are dedicating this season to a fallen brother.

Former Kenston offensive lineman Mitch Sotera, a member of the 2018 state title team, passed away earlier this summer along with his fiancée in a house fire in Hunstburg Township. Kenston players will be wearing a sticker sporting Sotera’s number on the side of their helmets this season.

“Mitch was always a full-time Bomber,” said Georgiou. “We loved Mitch and will be playing every game this year for him.”