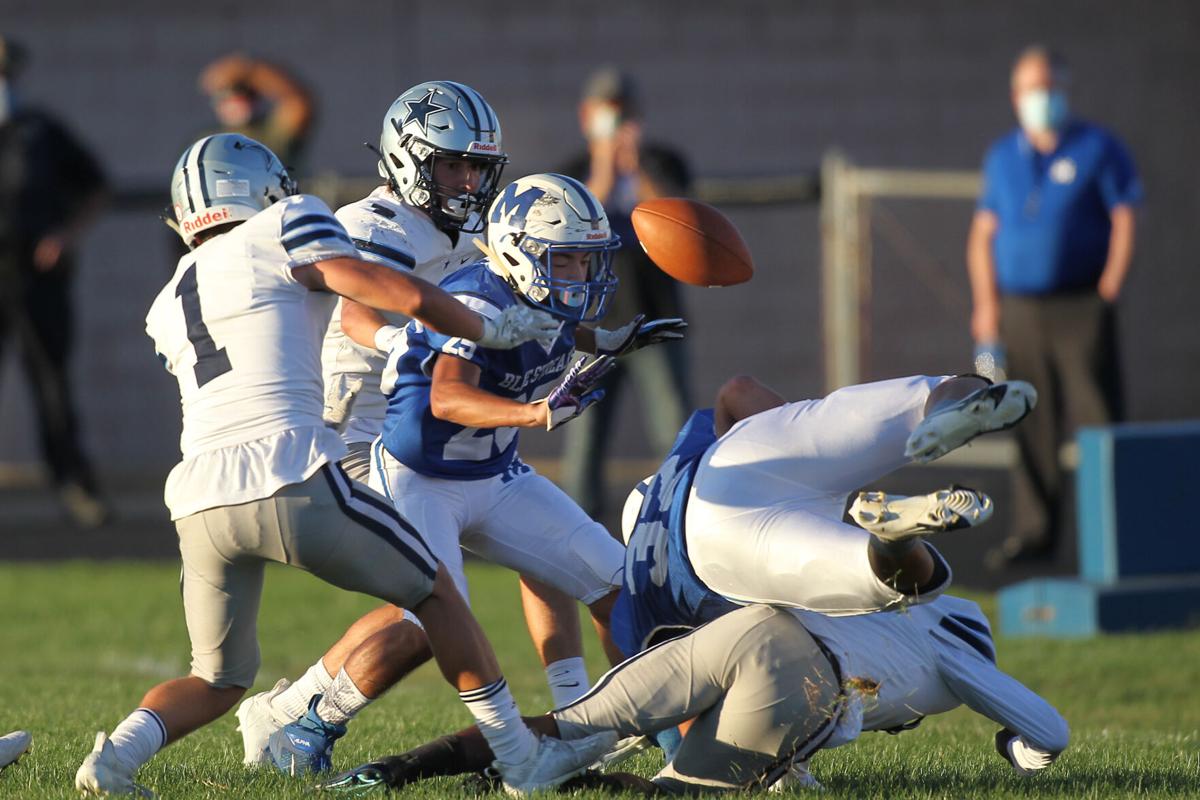 A scramble for a loose pigskin ensues during a Western Reserve Conference clash between Kenston and Madison that went in the visiting Bombers’ favor, 21-14, on Friday night at Dick Hamblin Field in Lake County. 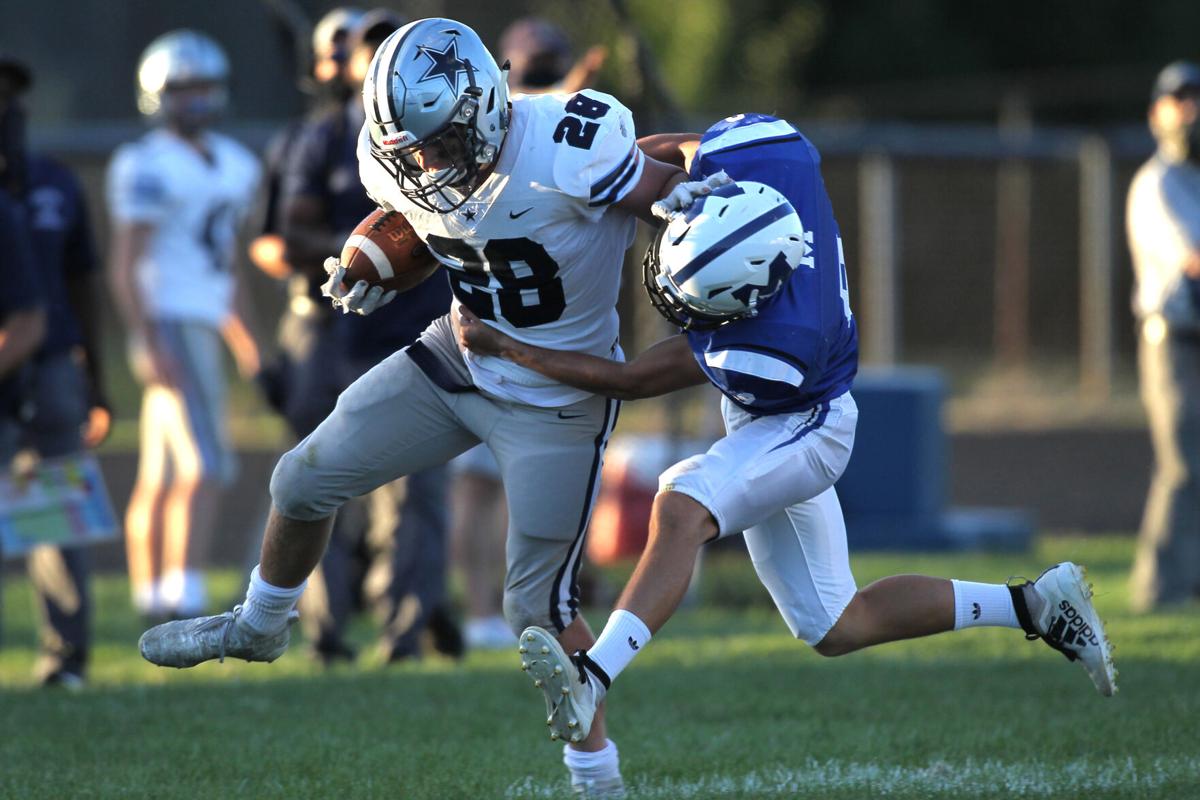 A scramble for a loose pigskin ensues during a Western Reserve Conference clash between Kenston and Madison that went in the visiting Bombers’ favor, 21-14, on Friday night at Dick Hamblin Field in Lake County.

The young Kenston gridders nearly gave the game away in more ways than one in crunch time, but they never crumbled during a 21-14 road victory against Madison on Friday night at Hamblin Field in Lake County.

The Bombers surrendered a 38-yard touchdown to open the fourth quarter, lost a fumble on the fringe of the red zone, lost a punt return on an errant bounce and had their backs against the wall with 1:32 to play.

But a key red-zone stop on fourth down and an interception in the end zone had the Kenston boys posting a dub in their season opener, after their week-one matchup against Mayfield got canceled because of coronavirus cases on the Wildcats’ side.

The score remained 0-0 through the opening frame, before the Blue Streaks struck first on a 27-yard touchdown toss from 6-foot-2 junior quarterback Michael O’Brien to 6-foot-1 senior receiver Noah Tweedy with 9:37 to go in the half.

Kenston attempted to respond but lost a fumble at the Madison 15-yard line.

On Kenston’s next possession, 5-foot-11 sophomore quarterback Nikko Georgiou connected with 205-pound senior running back Stanley Sell for a 16-yard gain and then 6-foot junior receiver Carson Rivera-Gebeau on a 14-yard gain to set up a 4-yard touchdown run by Sell to tie the game, 7-7, with 1:04 left in the half.

In his first varsity start, “The Stanley Steamer” Sell had 29 carries for 189 yards and two receptions for 40 yards.

“We thought we could run the ball against those guys,” Grubich said. “But I was proud of him. He’s worked himself into that role, but we’ve got a real young offensive line, and, for those guys to pop the holes open like they were doing, I can only say one thing: I was proud of the kids and the coaches.”

Midway through the third quarter, Madison was fixing to retake the lead with a second-and-goal opportunity on the 5-yard line. But Kenston 5-foot-8 freshman defensive back Sean Patrick had other ideas.

The young buck intercepted a Blue Streak pass in the end zone and returned it 100 yards to swing the scoreboard in Kenston’s favor, 14-7, with 5:20 to go in the frame.

“He’s going to be a stud, man,” Grubich said of Patrick. “Basically, we were in man coverage, but he read the quarterback’s eyes, and he jumped an out route, picked it off and took it to the house the other way. He’s going to be really good. The thing is he’s 14 years old.”

After forcing a three-and-out punt, Kenston then went 53 yards on seven run plays that concluded with a 6-yard touchdown by Snell for a 21-7 upper hand with 21 seconds left in the third.

But Madison responded with another O’Brien to Tweedy touchdown toss, this one for 38 yards, to cut the Blue Streaks’ deficit, 21-14, with 11:14 remaining.

Then a little bit of chaos ensued, with Kenston losing a fumble at the Madison 22-yard line and with Madison keeping its ensuing possession alive when an errant punt touched a Kenston player and the Blue Streaks recovered it at the Bomber 40-yard line with 6:55 to play.

But Kenston’s defense stood tall on fourth down and regained possession at its own 11-yard line. A three-and-out punt, however, provided Madison a 52-yard field with 2:14 remaining to put together a game-tying drive. Once again, Patrick had other ideas.

On first down at the 26-yard line, Madison’s O’Brien aired a pass into the end zone, but it was picked of by Patrick, for his second interception of the night, and the Bombers ran off the rest of the clock for the victory.

“There’s no doubt we had some self-inflicted wounds,” Grubich said about two lost fumbles in addition to losing a punt return. “The good thing is, we got out of there with the ‘W,’ and we can watch the film and coach those things up. But that’s something we definitely have to work on and get better at.”

Conneaut had a seven-game home win streak going back to 2018, but the West Geauga gridders didn’t know and didn’t necessarily care during their week-two road victory, 24-7, on Friday night at Joslin Field in Ashtabula County.

After surrendering an early pick-six, the Wolverines scored 24 unanswered points behind a defense that surrendered just 100 yards.

“And we started off slow, but our guys rallied together and put up 24 unanswered.”

Conneaut standout sophomore running back and defensive back Zack Rice picked off a West G pass to open the game and returned it 8 yards to the end zone for a 7-0 Spartan lead just one minute into the game. Rice also had 11 carries for 52 yards.

The Wolverines responded with 175-pound senior running back Trae Zimmermann scoring a 1-yard touchdown with 6:51 left in the opening act and then a 5-yard touchdown carry with 24 seconds to go for a 14-7 lead at the quarter mark. Zimmermann would finish the night with 27 carries for 119 yards.

Late in the second quarter, West G junior quarterback Danny Stewart connected with Zimmermann on a third-down screen pass for a 53-yard gain.

“Conneaut was being very aggressive on their line,” Sopkovich said. “They were getting good penetration, they were bringing extra linebackers, so they’re rushing the ball. And our team has been very good on that screen play, especially when (Zimmermann) is running it. He’s one of those big-play ball-carriers.

“So, I don’t care if it’s fourth-and-long, that’s the guys I’m putting the ball in the hands of. So, it was good execution, but it was also the right play call.”

That chunk play opened the door for Stewart to dial up 6-foot-1 junior receiver Torry Stazzone for a 15-yard touchdown toss and a 21-7 lead with 20 seconds to go in the half. Stewart would finish the game 10 of 14 passing for 139 yards.

West Geauga put the game away on a 30-yard field goal by junior kicker Joey DiLalla with 2:33 to go in the third quarter for the 24-7 final.

Defensively, West G 6-foot senior Luke Musser came up with his third interception of the season, and 5-foot-9 junior defensive back Chris Ranallo added another pick for the Wolverines.

“We knew going in that, if we could get them in pressure situations, we could control that game,” Sopkovich said. “And our defense played lights out. They didn’t get scored on.”

Another standout performance on defense propelled the Chagrin Falls gridders to another victory, 28-7, during a home clash against league foe Lakeside on Friday night at C.S. Harris Stadium.

The man of the evening was 5-foot-10 senior defensive back Will Tropp, who collected a 79-yard pick-six to provide the Tigers a 14-7 upper hand with 7:30 remaining in the first half.

Tropp came through again late in the third quarter, when the visiting Division II Dragons appeared in business following a 65-yard kickoff return by senior Saivion Colbert. But Tropp extinguished that possession with another interception.

Tropp also had a 20-yard reception and a 10-yard carry on offense.

Lakeside’s lone score of the game came on a 2-yard rush by 185-pound sophomore back J’Shon Sanders to tie the game, 7-7, to open second quarter.

Chagrin’s offense was motored by 154 yards rushing and 30 yards passing with nine first downs on 44 plays. Tiger 140-pound senior back Cam O’Connor, who had 17 carries for 77 yards, opened the scoring on a 4-yard touchdown carry four minutes into the game.

Chagrin 180-pound sophomore running back Donny Hardy had 12 carries for 68 yards, including a 32-yard touchdown run for a 21-7 lead with 5:26 to go in the third quarter.

Then, after McLaughlin’s fumble recovery, Hardy put the game to bed with a 22-yard touchdown run with 7:27 remaining in the game for the 28-7 final.