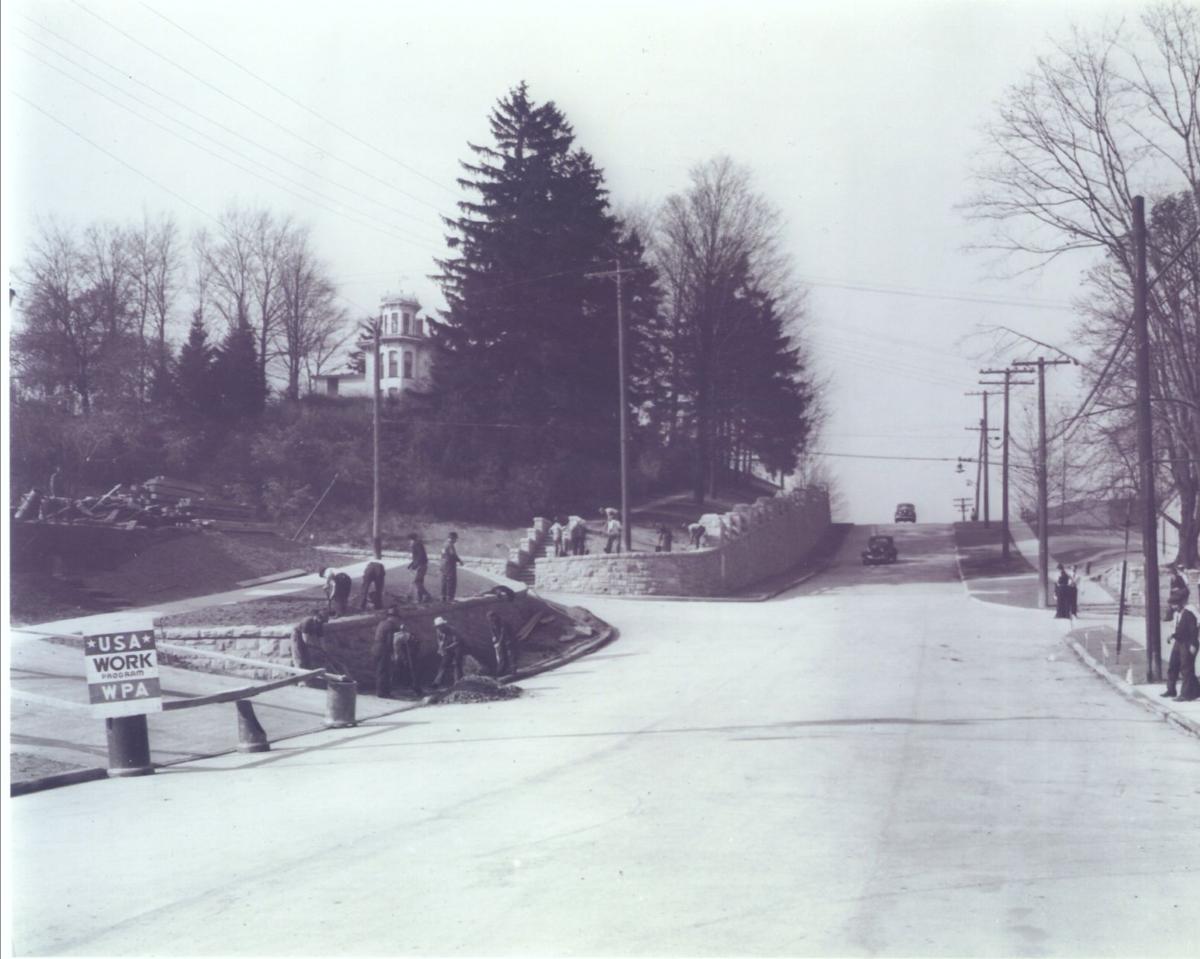 The Chagrin Falls Historical Society is seeking state and federal recognition for Grove Hill to receive designation on the National Registry of Historic Places. The site currently is being eyed for townhouse development and possible demolition of the historical Bancroft house. 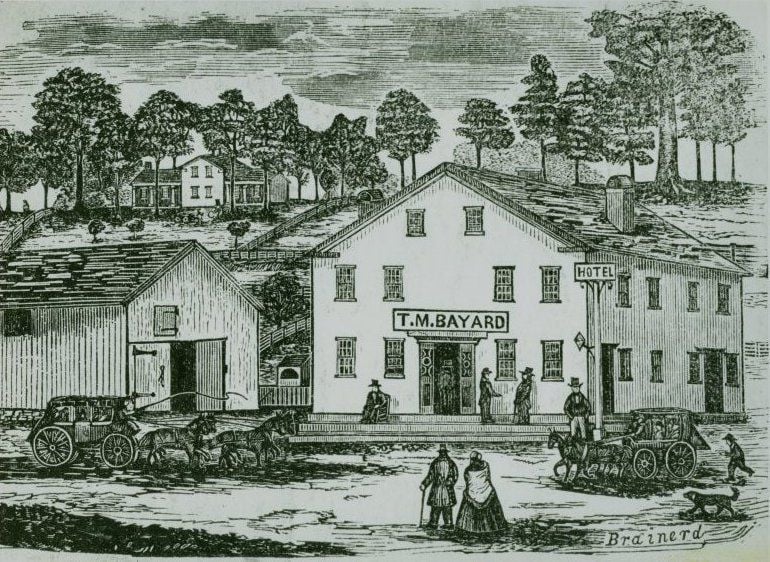 The Chagrin Falls Historical Society is seeking state and federal recognition for Grove Hill to receive designation on the National Registry of Historic Places. The site currently is being eyed for townhouse development and possible demolition of the historical Bancroft house.

The Chagrin Falls Historical Society is known for preserving news, but rarely does it make news.

It did last week when President John Bourisseau announced the organization will seek state and federal recognition for Grove Hill, which is being eyed as the site for a townhome development and possible demolition of a prominent historical house.

Any Grove Hill historic designation does not stop redevelopment or homeowners from making changes.

The announcement came at the beginning of Mr. Bourisseau’s slide talk about the steep Main Street hill with its panoramic view of downtown Chagrin Falls, a location where early “movers and shakers” chose to build their houses.

The new effort joins a neighborhood activist group called “Save Grove Hill” which is bringing attention to the possible development.

Recently, the Western Reserve Land Conservancy got on board offering to help raise money to purchase the house on the hill where the condos might be built.

“We are going to explore the possibility of seeking National Registry (of Historic Places) recognition and will submit basic information to the Ohio History Connection,” Mr. Bourisseau said.

“They will make a site visit and let us know if the site warrants recognition, (and) if they agree, we will make a formal application.”

The Grove Hill area under consideration stretches between North Street and Chagrin Boulevard and north to south from Summit Street to Orange Street.

It includes the public right of way that is North Main Street and the historic stone wall built by the Great Depression Era WPA program, which employed local men to take on needed infrastructure projects.

And as it is always explained, having a historic district designation does not prevent property owners from making changes to their homes or land.

They include an early newspaper publisher, mill and business owners and artists. Many of the early homes remain. One of them, the 1900 “Bancroft House,” at the very top of Grove Hill and now under threat of possible demolition by its current owner Robert Vitt and his Silver Leaf Ventures development company.

Mrs. Harry Bancroft and her husband were the first owners of the house with a view of the entire village at that time.

She was a prize winning horticulturist, Mr. Bourisseau said, who subdivided a small piece of land at the southwest corner of her lot, just enough to have built a series of greenhouses, which would feed her love of flowers, plants and landscaping materials.

It is said her home’s sweeping yard with all its plantings was a sight to behold, according to Mr. Bourisseau. The small evergreens planted on the property and pictured in old photos remain today.

The greenhouses were eventually sold to a widow who continued the flower business and kept up through subsequent owners into the 1950s.

By the mid-1960s, a contemporary home was built on the greenhouse site and built atop the old rock foundations.

Included among these old Grove Hill homes is the former Windsor Hospital complex including the oldest building “Linden Hall,” at 115 E. Summit St.

It too was ready for the bulldozer in 2012, destined to become part of the Falls Walk cluster home development, which would take in the entire hospital grounds.

Then, several citizens formed a marketing group to publicize the availability of Linden Hall and attracted a buyer.

A PowerPoint display was set up in a vacant downtown store window, information was put on the internet as well as newspapers and walk-through tours were held on more than one occasion and the group worked with local Realtors in their search for a buyer and the developer for an extension of time.

Ironically, the ultimate buyers found the Windsor Hospital’s Linden Hall on their own.

The Chagrin historical society with its goal of a historic designation for the hill, neighborhood and Bancroft house, joins a neighborhood effort to “Save Grove Hill,” which has now spread to all corners of the village.

At last count, 200 yard signs had been given away to residents and a handful of businesses. Lapel pins are the newest way the Save Grove Hill group has launched to get the word out.

The close of the Grove Hill program at the historical society museum, last week, included a presentation by the Western Reserve Land Conservancy’s Kendrick Chittock, director of development and conservation.

Grove Hill is a “keystone property,” which is something that “reflects the community, its history, location, structures and the public views it provides,” he said.

In other words, it’s a priceless commodity. When it’s gone, it’s gone. What Grove Hill means to the community cannot be stated in dollars and cents such as its appraisal number or its value when fully developed or even its fair market, say those who want to save the Bancroft House.

Mr. Chittock explained that negotiating with the owner is one path. “To save Grove Hill, you will have to come to terms with the seller, and in this case the developer has all the rights.”

The key to buying the hill from the developer is to offer a deal that is attractive to him and it could happen, Mr. Chittock added. “We have people working on it.”

Various village boards and administration will review plans, as required by the Chagrin Falls village charter, and consider steps such as tree removal, land grading and soil testing among other requirements, including the placement and architecture of the proposed townhomes. Ultimately, the village government would have to consider a permit to raze the Bancroft house.

Beyond that, there are historic regulations that must be addressed during almost every phase of any project, officials have said.

Mr. Chittock said last week that the conservancy has up-front money to put toward purchasing the land, but, “It is not a big bucket of money,” he said, and must be paid back to the conservancy.

As a nonprofit, the conservancy is limited to paying only the fair market value, he said, which might not entice the current owner, Mr. Vitt, who paid $550,000 for the Grove Hill property.

Earlier this month, the Chagrin Falls village Architectural Review Board sent Mr. Vitt, the Grove Hill developer, back to the drawing board.

Mr. Vitt has discussed several proposals with board members, including moving the Bancroft house 18 feet into the lot and demolishing a second building on the lot known as the artists’ studio.

That workspace is considered a historically important structure as well because it was the studio of David Philip Wilson, a prominent portrait painter whose subjects have included many famous Ohioans including the late John Glenn, an astronaut and U.S. Senator. Mr. Wilson’s portrait of Sen. Glenn in his space gear hangs in the Ohio Statehouse in Columbus.

Mr. Wilson’s wife, Binnie, shared the studio where she designed fabric and wallpaper for a Chicago manufacturer.

The fate of the Bancroft property remains in limbo as village officials wait for developer and property owner Mr. Vitt to come back, perhaps with more plans and requests.