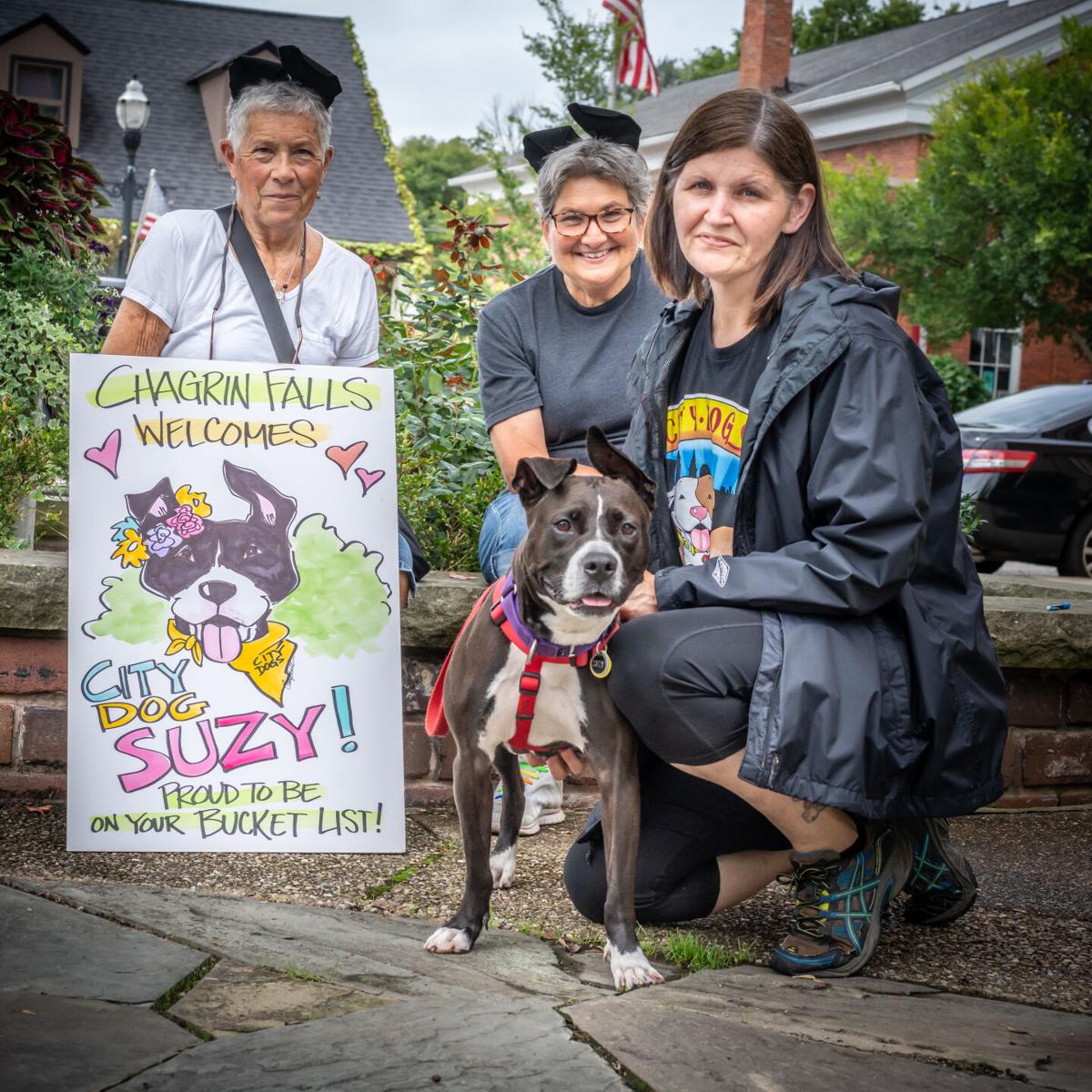 “CITY DOG” Suzy, a black and white pit mix, made downtown Chagrin Falls one of her bucket list destinations. The lovable pup famous for her floppy ear was diagnosed with late-stage cancer and is fulfilling 60 canine bucket list experiences. Suzy visits with, from left, CITY DOG volunteer Timy Sullivan, cartoonist Jenny Campbell and her foster mom Jen Lynch. CITY DOG is a 501(c)(3) nonprofit that raises funds for medical care for dogs in kennels. 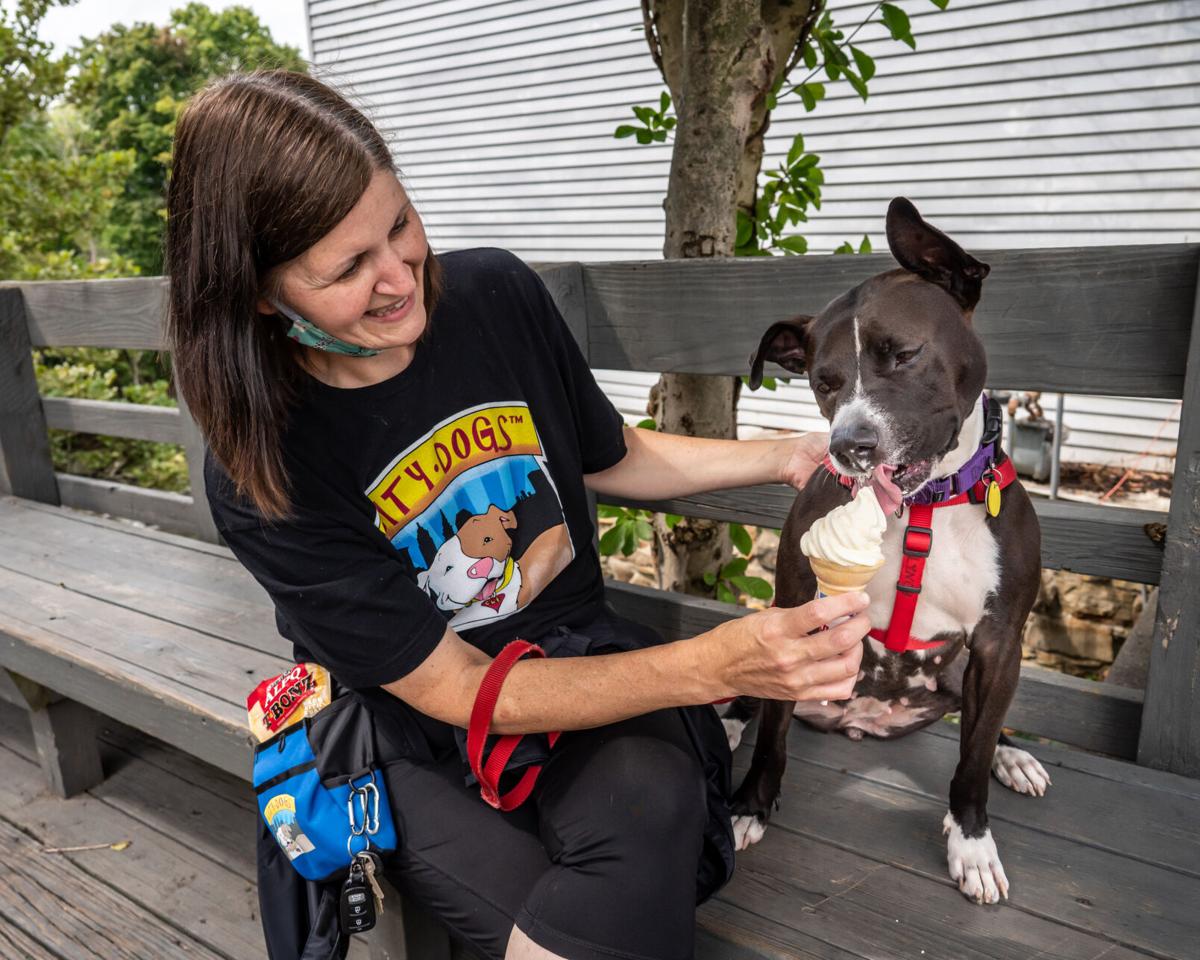 “CITY DOG” Suzy, a black and white pit mix, made downtown Chagrin Falls one of her bucket list destinations. The lovable pup famous for her floppy ear was diagnosed with late-stage cancer and is fulfilling 60 canine bucket list experiences. Suzy visits with, from left, CITY DOG volunteer Timy Sullivan, cartoonist Jenny Campbell and her foster mom Jen Lynch. CITY DOG is a 501(c)(3) nonprofit that raises funds for medical care for dogs in kennels.

“CITY DOG” Suzy is being treated like royalty these days and doing her bidding are 40 volunteers working to fulfill 60 “bucket list” experiences every canine should have during their time on earth or, in this case, Greater Cleveland.

She was in Chagrin Falls last week to experience two.

Sadly, the friendly pup – a black and white pit mix with one floppy ear – has late stage cancer and does not have a long-life expectancy.

CITY DOG volunteer and Bainbridge Township resident Timy Sullivan explained that, “they were getting her ready for the adoption floor when the veterinarian found that she was terminally ill. It was so surprising to everyone because to look at her you wouldn’t know.”

She added that with most dogs of her breed, Suzy was destined to become part of the kennel’s CITY DOGS program working to counteract prejudice against the breed.

Suzy’s diagnosis also made her ineligible for adoption, but she has a loving home for as long as she lives with her foster mom, Jen Lynch, a Cleveland Care and Control employee.

Mrs. Sullivan said the goal of Suzy’s bucket list is to give her the best possible end of life and raise awareness to how great pit mixes like Suzy are.

True to her advance billing, Suzy arrived in Chagrin Falls full of life, curiosity and a surprising amount of energy for her latest adventure, which was her introduction to the village and two of its more quintessential charms.

The first was Jack Shutts, a dog-loving proprietor of Chagrin Hardware. He came bearing dog biscuits, pats and praise. There were photo ops, too. Suzy modeled, briefly, a hardware store hat.

The second Chagrin Falls experience was a sugar cone filled to a perfect peak with the Popcorn Shop’s famous Euclid Beach frozen custard. It was French vanilla and gone in under 20 seconds.

Then she posed with her human friends and her own mini-billboard by nationally syndicated comic strip creator Jenny “Flo and Friends” Campbell of Moreland Hills, Mr. Shutts, Mrs. Sullivan and volunteer Heidi Wormser of Chagrin Falls.

All wore Suzy “ears” – headbands with one ear straight and the other floppy. Mr. Shutts declined donning the headgear claiming that they “will make me too attractive and that would look bad for the hardware business.”

As volunteer publicist for CITY DOGS, Mrs. Sullivan said she understands the difference between CITY DOGS and the CCAC can be confusing.

“The CITY DOGS program was launched in 2014 to increase adoptions by preparing dogs in the city kennel for lives in loving homes,” she said.

“These are dogs taken in by Cleveland Animal Care and Control, are usually strays and most are pit bulls or pit mixes,” she said.

The organization’s goal is to create “opportunities for the public to meet the dogs and get to know them as the great family members they were meant to be, change the image of pit bull type dogs and demonstrate pit bulls are just dogs with big heads.”

More than 300 CITY DOGS volunteers do everything from walking dogs to taking them on outings, fostering them in their homes and serving as adoption counselors.

Mrs. Sullivan, Ms. Campbell and Ms. Wormser are founders of CITY DOGS after coming up with the idea over breakfast one Sunday morning six years ago.

“We just took it to Ed Jamison at CCAC but the program was built by literally hundreds of volunteers who were attracted to the mission, fell in love with the blocky headed dogs and jumped in as soon as the program was announced, Ms. Sullivan said.

“I have never met such creative, fun loving, passionate volunteers. It’s been awe inspiring to see how this has grown.”

Friends of CITY DOGS is a 501(C)(3) nonprofit that raises funds to provide enrichment and medical care for dogs in the kennel.