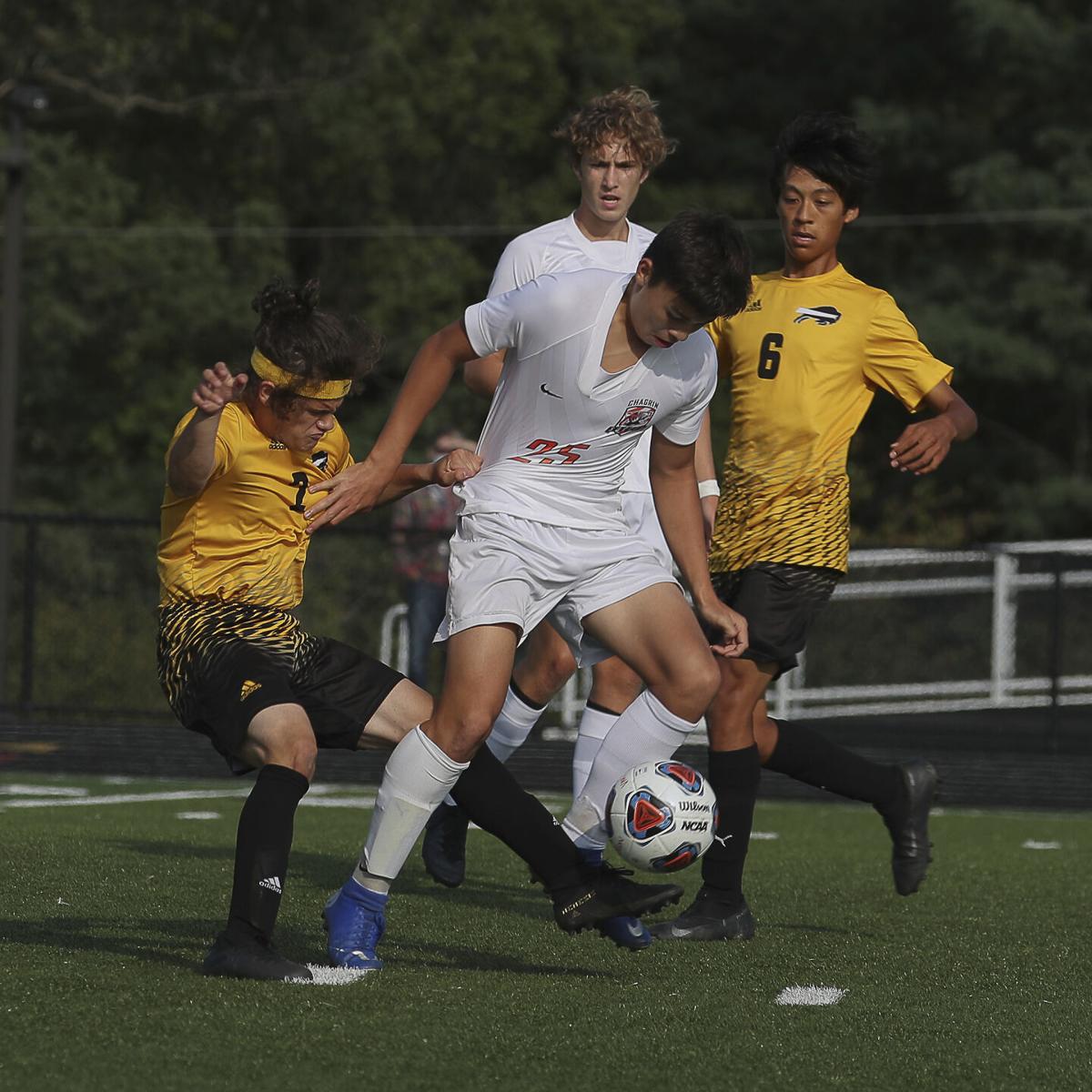 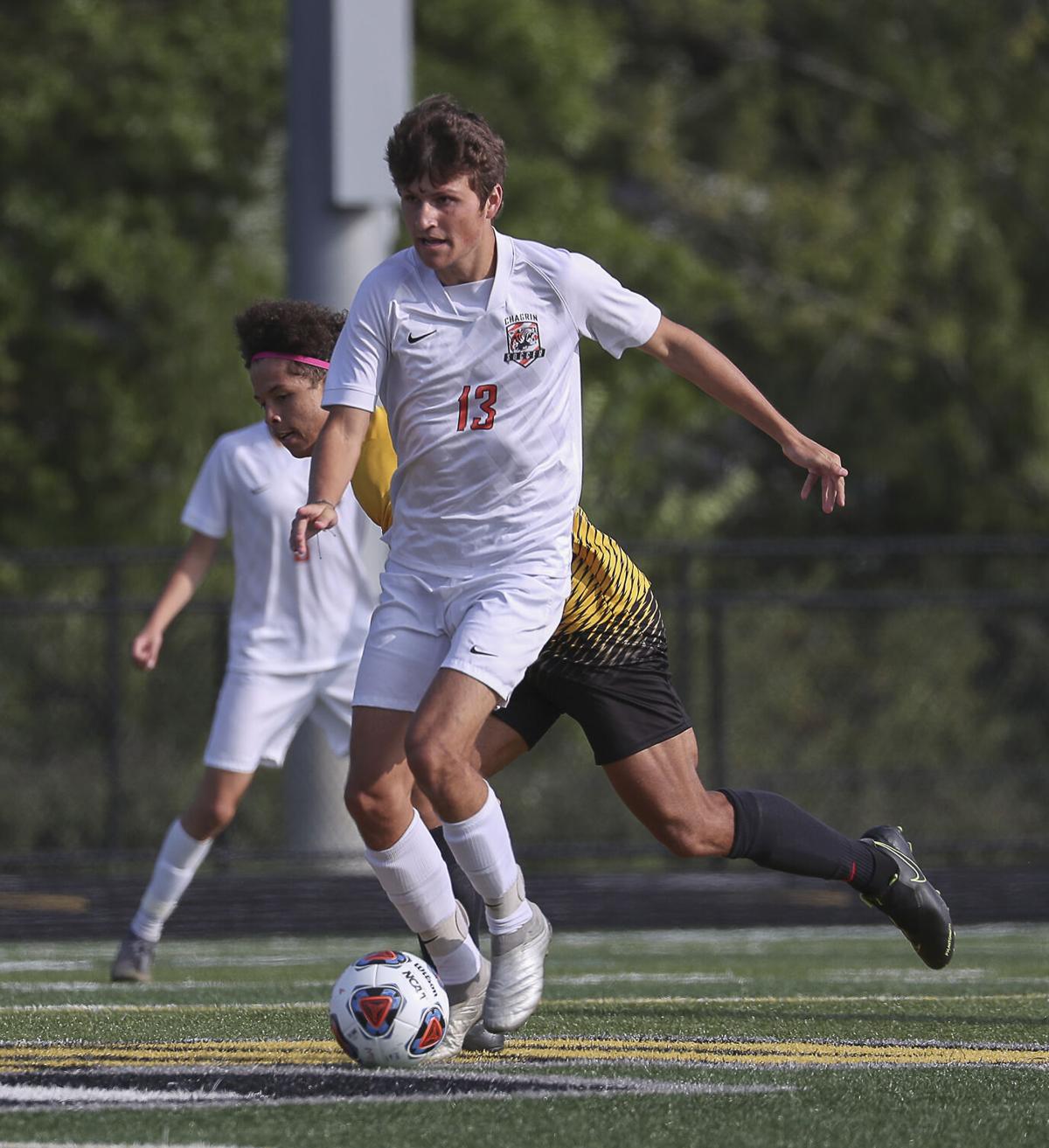 Chagrin Falls senior Jack Stauffer is a natural field player with the foot skills to score goals and dish out assists on the pitch, but the Tiger veteran has been counted on for the use of his hands for three seasons now.

Stauffer was a backup varsity goalkeeper as a sophomore, when he collected eight saves during the Tigers’ 15-3-1 district runner-up campaign in 2018.

Then he split time between the posts last year, when he made 39 saves during an 8-4-5 rebuilding year that featured no senior starters for Chagrin Falls. Stauffer also got time on the field to score one goal and distribute two assists.

But as the 2020 Tigers have found traction with six shutouts to remain unbeaten at 7-0 and garner a No. 9 state ranking in the Division II Ohio Scholastic Soccer Coaches Association poll, Stauffer has been the full-time starter with 14 saves on his resume. The only tally he surrendered this season was during a 6-1 victory against Mayfield on Sept. 12.

“The sun was out that day, and he didn’t even think the ball was coming towards the goal, of all things,” Chagrin Falls fourth-year head coach Brian McKenna said. “But the big thing about Jack is that by trade he’s a field player, and he’ll touch the ball 15 times or so a game with pass-backs.

“So, he’s a really good field player, but he is selfless and is playing goal for the betterment of the team.”

Chagrin’s defense has been lights out this year with senior captain JT Marting and sophomore Andrew Nachtwey as center backers, and seniors John Ranieri, Brenden Levey and Alex Fisher taking care of the two outside spots. Levey also plays some midfielder.

During a 3-0 road victory against Chagrin Valley Conference foe Beachwood last Thursday – which improved the Tigers’ record to 6-0 with a 3-0 mark in the league – Stauffer and senior backup keeper Andy Neimeier didn’t have to make a single save in 80 minutes. The Bison’s only shot on target was actually saved by Tiger senior midfielder Clayton Pilotti.

“They had one shot where (Pilotti) was able to clear it, because our keeper wasn’t in a spot for that ball,” McKenna said. “Technically, that was the only save of the game for us, by our midfielder. He’s one of those 6-foot-plus seniors.”

Although the Tigers didn’t graduate any starters, they did lose their target striker, junior Michael Mashke, who’s focusing on lacrosse this year, after leading Chagrin soccer with 10 goals and three assists in 2019.

But the 2020 Chagrin strikers have taken a top-to-bottom approach in their attack with nine guys combining to score 24 goals through seven games.

Specifically, the five previously mentioned defenders have combined for three goals and eight assists from the back line through seven matches.

“We do play that way, where one can push ahead and the others work in tandem well,” McKenna said. “We’re very fortunate to have any of them make a move on up. It’s something we’ve trained for, but we’re fortunate, because we have the skillset to be able to do it.”

Zitney put away the 1-0 tally in the first half against Beachwood, an advantage the Tigers’ held for the majority of the game. They didn’t bury their latter two goals – another from Zitney and one from junior midfielder Alex Cantor – until late in the second half. Clark and Ranieri had assists.

“We were mostly in control of the possession, but they were holding strong on their back line, and we just weren’t making that final push through,” McKenna said. “It took a little while, but we felt comfortable during the game.”

There was one point where Beachwood had an opportunity to put one away, when Stauffer came just outside the box to try and swipe away the ball from a Bison forward, but the Tiger keeper was yellow carded for getting too much body and not enough ball, according to the official.

That’s when Neimeier came in for a chance to make a save, but Beachwood’s ensuing free kick sailed high over the crossbar.

Overall, Chagrin has a midfielder-heavy roster this season. In addition to Zitney, Clark, Pilotti and Cantor, sophomore Kenny Clark has stepped up with three assists so far, and junior Lance Beuscher has a goal and two assists. Meanwhile, junior Brett Vaccaro is a top returner but wasn’t expected to make his debut until this week because of an injury.

Chagrin’s formation is typically geared toward benefiting those players’ ability to control the middle third of the pitch, McKenna said.

“What’s been nice is the kids are really giving us a good work ethic in practice and in the games,” he said. “Also, we’ve been dealing with a couple injuries, and guys have been stepping up.”

Another returner who was primarily a midfielder last season is senior Zach Lechman, but the Tigers moved him up as a target striker this season. He provided the Tigers’ tally in a 1-0 victory against Aurora (6-1-1) during a season opener on Aug. 29.

But Lechman, who has two goals and two assists, has been sidelined by injury the past couple weeks. In turn, Beuscher moved up from midfield and has been primarily getting the minutes up top.

“I think it says a lot for our kids to be still scoring and still doing the shutouts with two starters out right now,” McKenna said. “Certainly, we’ve always expected our defense to be the backbone of the team, and that’s been the case. And then we’ve had some younger players step up, playing better than expected.”

On Tuesday night, the Tigers defeated Perry, 2-0, to improve to 7-0 with a 4-0 mark in the CVC. Pilotti scored two goals, while Levey had an assist and Stauffer only had to make one save.

Up next, Chagrin Falls will host Division II No. 19-ranked Ontario at 3 p.m. Saturday at C.S. Harris Stadium.