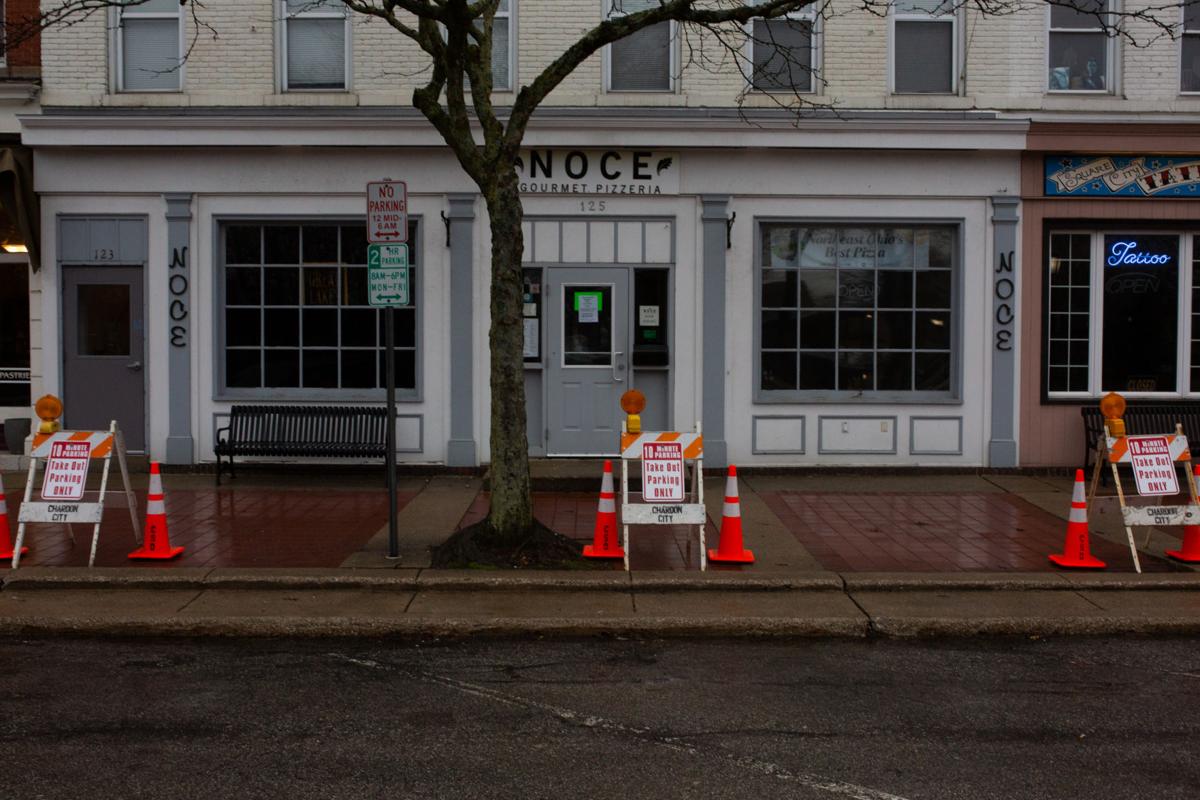 Restaurants throughout the state, such as Noce Gourmet Pizzeria in Chardon, above, were forced to close their doors to dining-in due in response to Gov. Mike DeWine’s order earlier this week to help slow the spread of COVID-19, a novel form of coronavirus. Mary Glauser, executive director of Chardon Tomorrow, worked with city officials to offer designated pickup parking spots for restaurants that are now offering takeout. 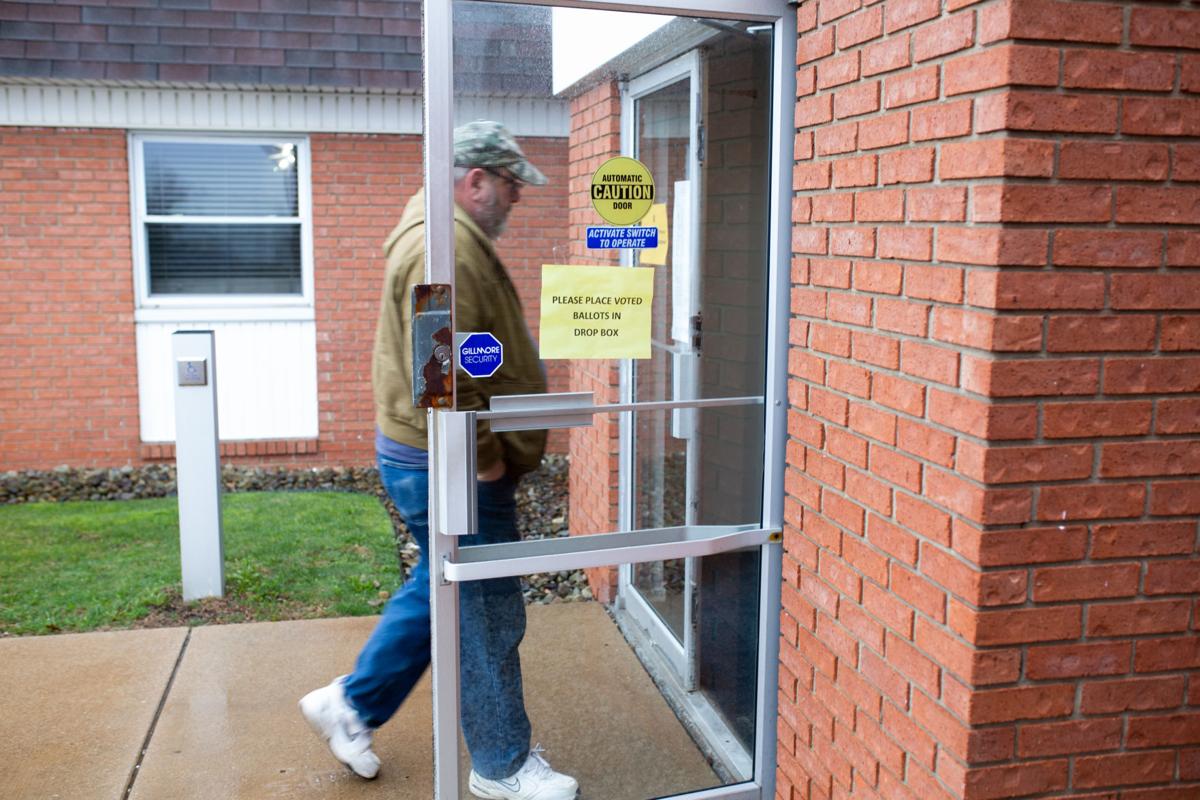 Carl Sanborn of Troy visits the Geauga County Board of Elections in Chardon on Tuesday to register for an absentee ballot after the primary election was delayed. The election date remains in limbo as of Wednesday.

Restaurants throughout the state, such as Noce Gourmet Pizzeria in Chardon, above, were forced to close their doors to dining-in due in response to Gov. Mike DeWine’s order earlier this week to help slow the spread of COVID-19, a novel form of coronavirus. Mary Glauser, executive director of Chardon Tomorrow, worked with city officials to offer designated pickup parking spots for restaurants that are now offering takeout.

Carl Sanborn of Troy visits the Geauga County Board of Elections in Chardon on Tuesday to register for an absentee ballot after the primary election was delayed. The election date remains in limbo as of Wednesday.

Delay of the March 17 primary election in Ohio has candidates and supporters of issues in Geauga and Cuyahoga counties wondering, what’s next?

“I mean, this is just too early to tell,” Geauga County Commissioner Ralph Spidalieri said on whether he would continue to campaign for re-election. He is being challenged by South Russell Councilman Dennis Galicki in the Republican primary.

Mr. Spidalieri said actions by Gov. Mike DeWine and Dr. Acton to close the polls this week was “a bit of a knee jerk” reaction. “How do you do something like this 12, 14 hours before the election?” he asked. “If this is what they wanted to do, then they should have done this a week ago.”

Mr. Galicki said that the candidates are dealing with “unplowed ground” at this point in the election. As for the possibility of extending the election to June 2, Mr. Galicki said, “Holy cow. I think all candidates would just say let’s get this thing over with. Let’s stop spending money. I think most of the people have already made up their minds, one way or the other, which way they want to vote. It’s really unforeseen.”

Mr. Galicki said he doubts that more mailers and campaigning will influence voters.

“I hope that they get everything back on track for the future, and we’ll go ahead and continue to run the positive campaign that we’ve been running to instill confidence in what I can do as the probate (and juvenile) judge if I’m elected,” he said.

Mr. Rambo said that it was frustrating going back and forth to let campaign volunteers know what was happening with elections.

“We were working into the night, putting up campaign signs and getting ready to have people appear at the polls to support me.”

Judge Grendell could not be reached for comment from the Times.

Shelley Chernin, head of the Russell Township Citizens’ Park District Levy Committee, said that the board has already spent all donations for the Issue 3 campaign, a 1-mill levy to help in the purchase of property on Music Street.

“We’ve been working long and hard on this election campaign, and it certainly is frustrating when we were geared to have the election [Tuesday] to suddenly have to change, but I understand the reasoning,” Ms. Chernin said. “I trust the state health department’s opinion that canceling the in-person voting for now will slow the spread of coronavirus. And public health has to come first. We will make our adjustments.”

Ms. Chernin said the board and levy committee is determining what they need to do with the primary elections potential postponement.

“Unfortunately, because of what we thought would be the time of the election, we spent all the donations that we got toward the levy campaign,” she said. “Whatever campaigning we do in the future without further donations is going to have to be without cost.”

Ms. Chernin said the campaign will maintain their social media presence and their signs will stay up until more information is available on the election.

The wrangling over when to hold the primary continued this week. As of Wednesday morning, Ohio Secretary of State Frank LaRose stated that boards of elections could not process any new voter registrations for a June 2 primary, the date he declared for voting to take place.

According to Director of the Geauga County Board of Elections Pete Zeigler, voters can still download and mail in an absentee ballot request. But the elections boards across Ohio cannot process the requests until they receive further guidance from Mr. LaRose. Mike West, community outreach manager for the Cuyahoga County Board of Elections, said that they are also waiting on further guidance from the secretary of state’s office.

The confusion over the primary began on Sunday after a series of failed legal attempts to close the polls.

On Monday afternoon, Gov. DeWine and other state officials said they would seek to postpone the election until June 2 in an effort to reduce large crowds that could further spread the COVID-19 virus. Officials backed a lawsuit filed by two Franklin County residents with health issues who stated that going to the polls would make them fear for their lives and violate their constitutional rights.

Franklin County Common Pleas Judge Richard A. Frye said no to the lawsuit, explaining that state officials could not guarantee June 2 would be any safer.

“There are too many factors to balance in this unchartered territory to say that we ought to take this away from the legislature and elected statewide officials, and throw it to a Common Pleas court judge in Columbus 12 hours before the election,” Judge Frye said before issuing the ruling.

About 10 p.m. Monday, Dr. Acton issued her order to close the polls.

“During this time when we face an unprecedented public health crisis, to conduct an election tomorrow would force poll workers and voters to place themselves at an unacceptable health risk of contracting coronavirus,” Gov. DeWine said Monday after polls were declared closed. “While the polls will be closed (on March 17), Secretary of State Frank LaRose will seek a remedy through the courts to extend voting options so that every voter who wants to vote will be granted that opportunity.”

“We had an imminent health crisis we had to deal with,” Gov. DeWine said in a press conference on Tuesday. “The director of health, based upon everything she knows, based upon all the evidence, based upon consultation with Frank LaRose, she made that decision. I fully support that decision. We did what we needed to do to protect the people of the state of Ohio.”

Gov. DeWine said that the June 2 date was chosen to give citizens ample time to vote, but it is unclear if that is an official date for an in-person election. Gov. DeWine advised that his team will work with the General Assembly and the courts to come to a final solution so every citizen can vote in Ohio’s primary election.

“[Monday’s] actions did not create unchecked authority with the governor or secretary of state to run a new election,” according to Ohio Democratic Party Chairman David Pepper. “So authority for a new election must come from the legislature or from a court. [Tuesday’s] action seeks that court order, preserving the primary while also proposing a more workable window for the election to take place, along with multiple opportunities and a reasonable amount of time for voters to vote.”