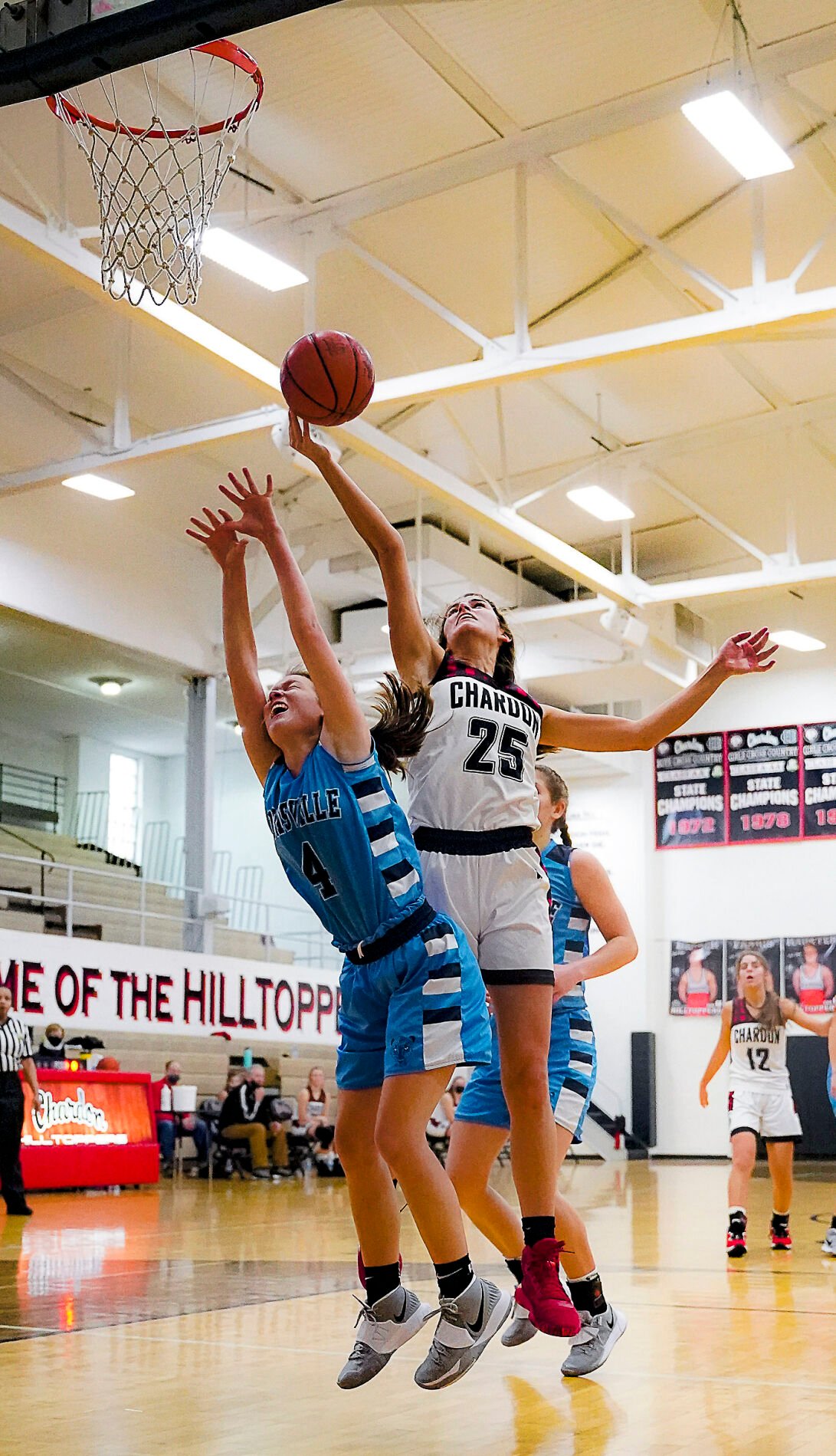 Chardon forward Kayla Noerr attempts to corral the rebound during the Hilltoppers’ matinee victory against Louisville at the Barn last Saturday. 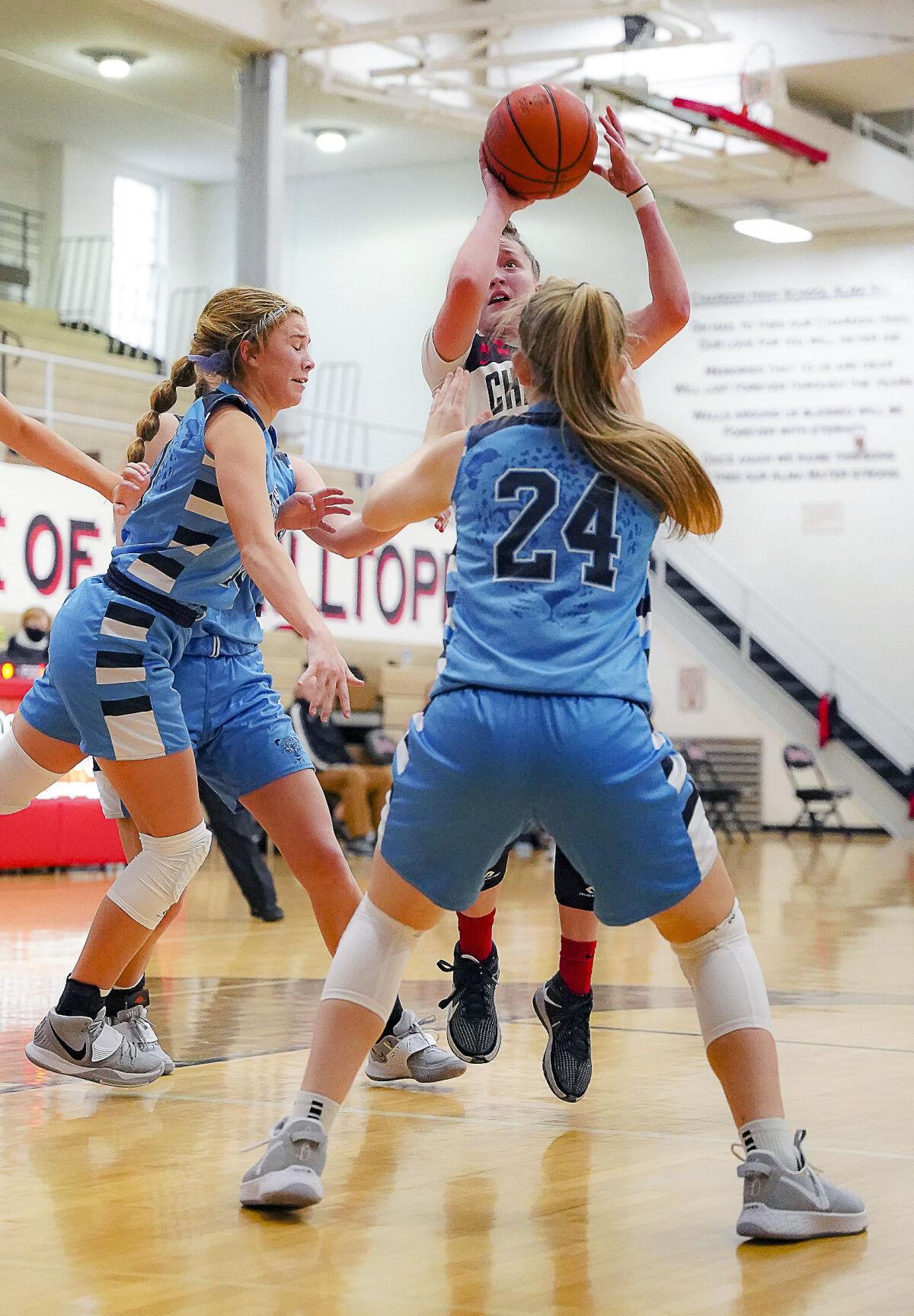 Hilltoppers’ guard Jo Janda attempts a shot despite being swarmed by Louisville defenders during Chardon’s 66-52 win.

Chardon forward Kayla Noerr attempts to corral the rebound during the Hilltoppers’ matinee victory against Louisville at the Barn last Saturday.

Hilltoppers’ guard Jo Janda attempts a shot despite being swarmed by Louisville defenders during Chardon’s 66-52 win.

After a two-week period when the Chardon Hilltoppers girls’ basketball team couldn’t practice together it was tough to predict how they would look when resuming play. The team was coming out of its long layoff on a tough stretch of opponents as it took on the Hathaway Brown Blazers, the Cleveland Heights Tigers and Louisville Leopards. The team only had a week of practice together before resuming its regular season. The Hilltoppers refused to let that be an obstacle as they came out of the break strong by beating Hathaway Brown and Cleveland Heights and continued that trend on Jan. 2 by defeating the visiting Louisville Leopards 62-55 on Saturday afternoon for their third consecutive victory.

“Anytime you can beat some quality opponents like Hathaway Brown, Cleveland Heights and Louisville, Louisville is a really great program in all sports. Their girls’ sports are really good. Any time you have the opportunity to beat some quality teams is always good for your confidence and your spirit,” said Chardon head coach Cullen Harris.

It was another game where Chardon needed to fight down to the wire. The Hilltoppers opened the fourth quarter holding just a six-point lead. The offense then erupted to go on a 9-2 run to make it a 13-point game. Louisville refused to go quietly and put together a 16-7 surge to make it a 55-51 game in the final minutes. Chardon needed to make its free throws in order to clinch the victory and senior guard Jo Janda was ready. The 5-foot-7 Hilltoppers’ guard tallied eight points in the fourth quarter and went six-of-six from the free throw line to give her team the win.

“I do spend a lot of time on free throws,” said Janda, “Anytime you win by one it’s a win so you gotta make all of them.”

It was a physical game from the start. The Leopards were playing in their first game since November as athletics had been paused through the whole month of December. The team only started practicing together for about a week by the time the matinee against the Hilltoppers rolled around. Chardon opened up a 15-5 lead in the first quarter thanks to senior guard/forward Sam Liechty. She scored six points in the opening quarter but the Leopards scored six unanswered points to cut it to a four-point margin to end the first.

That was the theme of the game. Any time the Hilltoppers opened up a big lead Lousville answered the call and cut it to single-digit deficit to give itself a chance to get back in the game. Lousiville was relentless on the glass holding a 38-28 edge in total rebounds. That showed in the third quarter when the Leopards kept several possessions alive by cleaning up the glass to cut into the lead.

“Some of our post players had some foul trouble,” said Coach Harris, “Some of our guards were trying to leak out a little bit. We got away with it last game but this game it didn’t quite work out for them. We didn’t rebound the ball as well as we wanted to and had to keep competing and fighting and gave them a lot of second-and-third opportunities. Credit to them they played hard and tough.”

That’s been something that has plagued the Hilltoppers over these last three games. The team has created comfortable leads but allowed the opposition to mount rallies by taking its foot off the gas and making unforced errors. The good news is that it has only been seven games for Chardon and the team is overcoming its mistakes to stay in the win column. Chardon defeated Kirtland on Monday night to run its winning streak to four games.