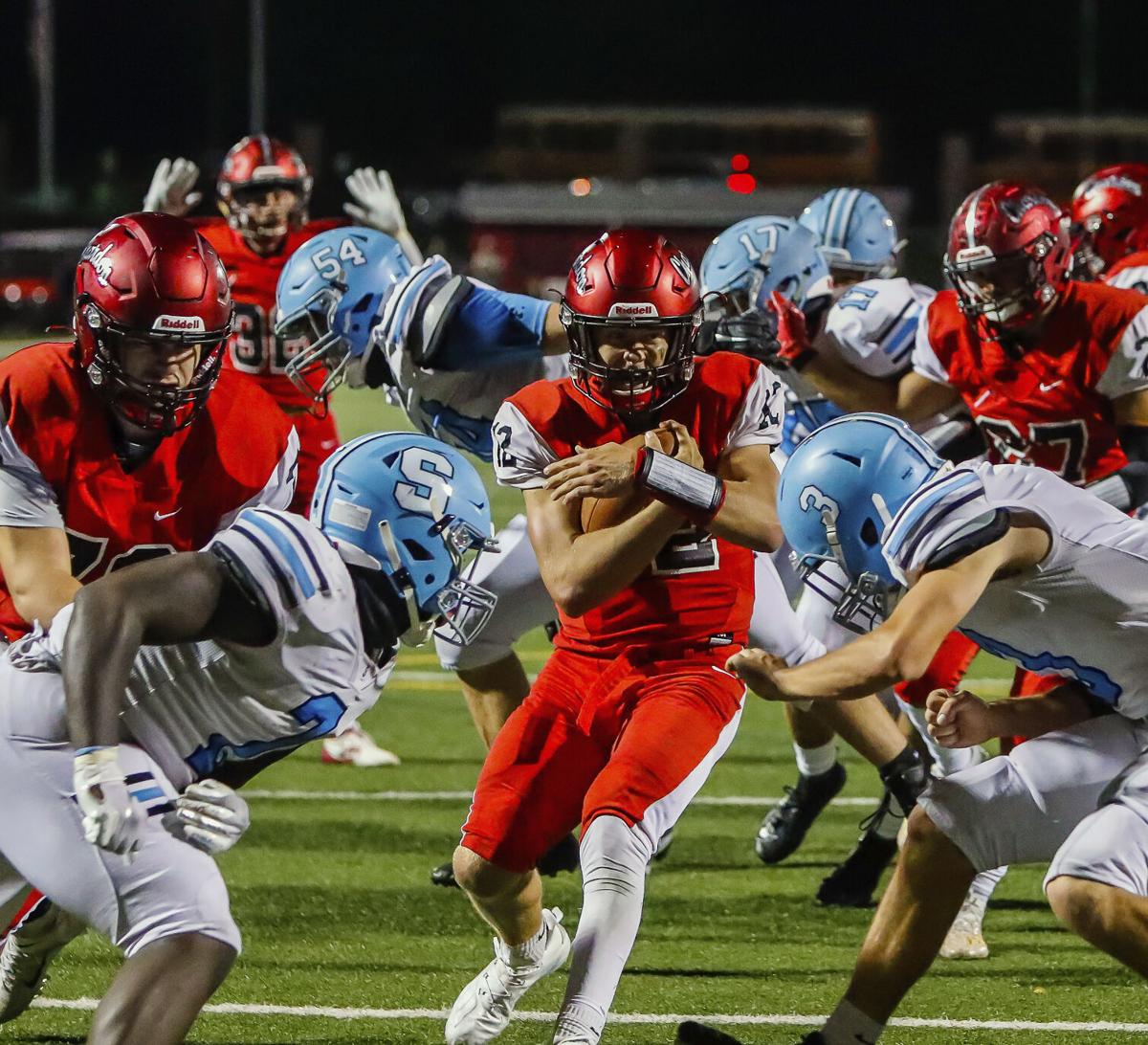 Chardon 6-foot-1 senior quarterback Drew Fetchik protects the pigskin on a keeper up the middle during the Hilltoppers’ home victory, 50-0, against Western Reserve Conference foe Willoughby South on Friday night at Memorial Field. 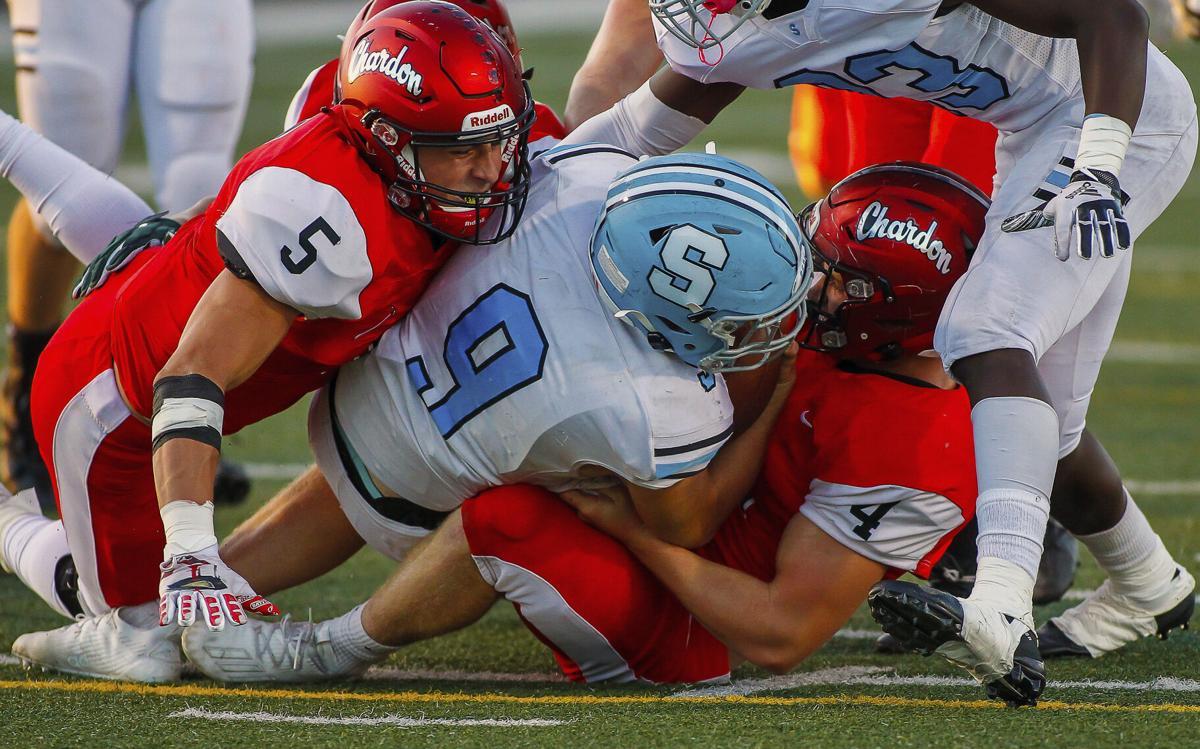 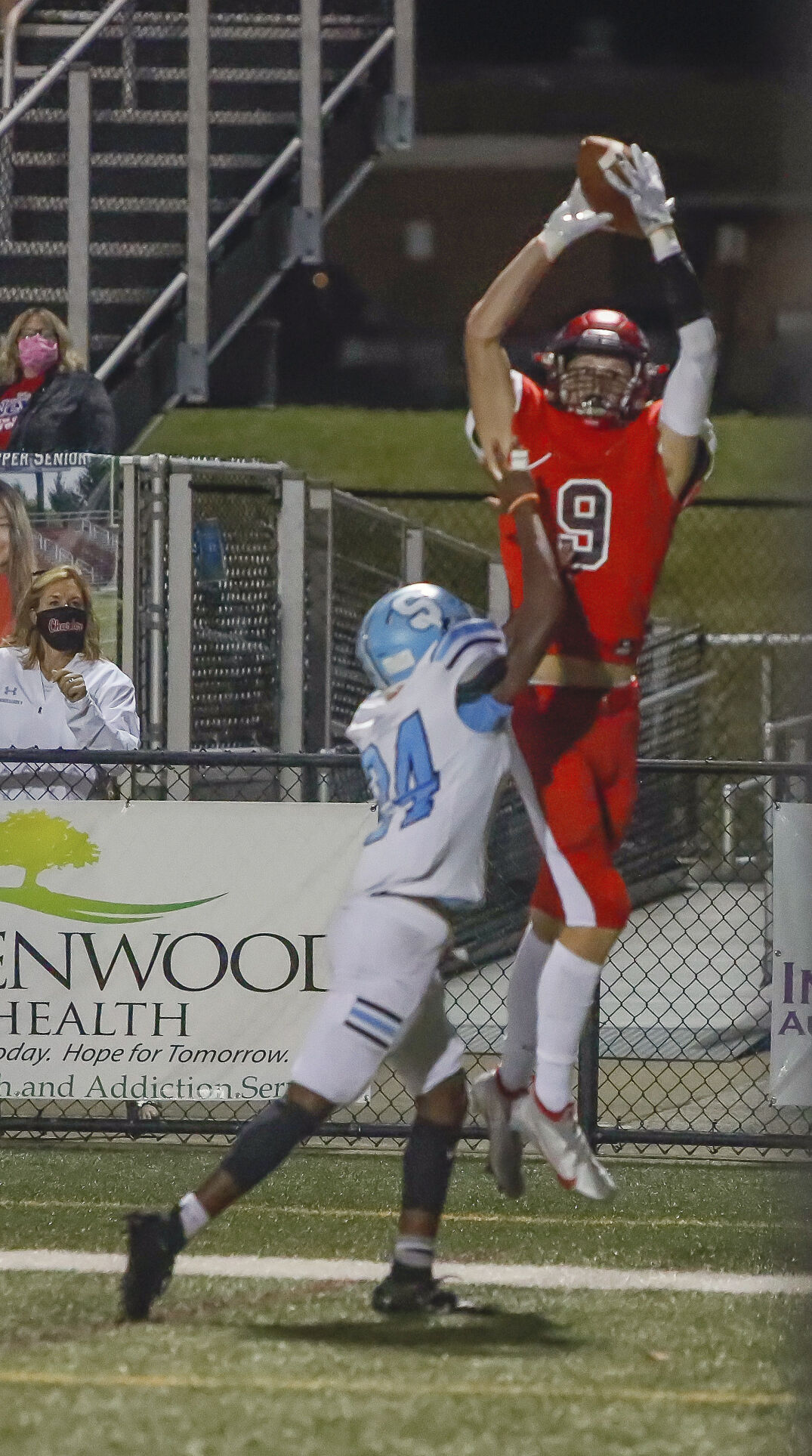 Chardon 6-foot-5 senior Brady Toth (No. 9) goes up and gets a 7-yard touchdown toss from quarterback Drew Fetchik.

Chardon 6-foot-1 senior quarterback Drew Fetchik protects the pigskin on a keeper up the middle during the Hilltoppers’ home victory, 50-0, against Western Reserve Conference foe Willoughby South on Friday night at Memorial Field.

Chardon 6-foot-5 senior Brady Toth (No. 9) goes up and gets a 7-yard touchdown toss from quarterback Drew Fetchik.

The Chardon boys were fixing to blow out visiting Willoughby South, but just a 7-0 lead at intermission had the host Hilltopper fans scratching their heads on Friday night at Memorial Field.

Chardon put a 42-0 skunking on South in 2019, when the Rebels were a playoff team. Since then, the Hilltoppers have no doubt improved upon their regional runner-up campaign, while the South gridders are arguably weaker.

But the Rebels held Chardon’s touted ground attack to just 51 yards rushing in the first half of Friday’s Western Reserve Conference clash, and they forced the Hilltoppers into a trio of three-and-out possessions.

“I was audibling out of some plays, and we were trying to run some counters, because it appeared the jet was open,” Chardon 6-foot-1 senior quarterback Drew Fetchik said. “So, part of it was my fault that we started off slow. But when we started moving the ball and getting into a groove, that was when we started clicking.”

Chardon’s lone score of the half came in the air, when Fetchik dialed up 170-pound senior running back James Pettyjohn on a deep pass for a 39-yard touchdown on a second-and-10 play call with 3:03 to go before the break.

Up until that point, Pettyjohn had four carries for 5 yards with South’s defense keying on him after rushing for 179 yards the previous week. But that deep touchdown pass opened the door for the run game moving forward.

“A play like that definitely takes the corners and the safeties and gets them from just staring at the run to making them have to respect us in the air a little bit,” Fetchik said. “So, we were able to exhale a little bit, like, ‘Woo, we finally scored.’ So, that definitely helped, especially going into halftime with a lead.”

Nonetheless, the Hilltoppers’ defense was so stifling that no more points were needed, but Chardon still went off for six touchdowns in the second half for a 50-0 victory to improve to 2-0 against the winless Rebels.

Not only did Chardon collect three interceptions – by 6-foot senior Kevin Doyle, 6-foot-5 senior Brady Toth and 5-foot-11 senior Vince Ferrante – but the Hilltoppers kept South’s offense to negative-63 yards for the night. Four fumbled snaps by South attributed to those negative plays, but the Hilltoppers lived in the Rebels’ backfield all night with four sacks and five tackles for loss.

Chardon’s Ferrante, an all-Ohio linebacker, was South’s biggest nightmare. He got going with a tackle for loss and a sack on the Rebels’ second possession to force a three-and-out punt.

In the second quarter, Ferrante added another sack that forced South to punt from its own 8-yard line, providing Chardon a short field to pave way for that 39-yard touchdown toss.

“My speed – I mean, getting back there fast,” Ferrante said. “I would get past their linemen and chase down the quarterback. It was just my violence in getting past defenders. They put me on the D-line, because we have a package where I go on the D-line that basically allowed me to get in the backfield again and again.”

Thanks to that defense, Chardon only need 254 yards of offense to put 50 points on the board by night’s end. After a 44-yard kickoff return by senior Blake Barker to open the second half, it took the Hilltoppers five plays to land Pettyjohn in the end zone on an 11-yard rush for a 14-0 upper hand.

After a three-and-out South possession, Chardon took over on a 48-yard field. Another five plays had 6-foot-4 junior Nathanael Sulka working out of the wildcat for an 18-yard gain and then a 2-yard touchdown for a 21-0 lead with 4:13 left in the third quarter.

And then Toth came up with his interception and returned it 21 yards down to the red zone. On the next play, Chardon’s Fetchik punched in a 4-yard touchdown on a keeper. Senior Charlie Brosch ran in the two-point conversion for a 29-0 lead with 3:03 to go in the frame.

“We were definitely in control,” Fetchik said. “But South was a good team. They had a really good defense. They just have to clean up their offense a little, and I think they’ll win a lot of games.”

On South’s ensuing three-and-out possession, with a bad snap putting the Rebels at fourth-and-23 from their own 10, Chardon 195-pound senior Cade McDevitt was fixing for a punt return, but a hot-headed Rebel speared him before the pigskin arrived, and penalty flags colored the gridiron.

Chardon made quick work of a 24-yard field, with Fetchik dialing up Toth for a 7-yard touchdown toss and a 36-0 upper hand to enact a running clock with 10:50 remaining. But the end-zone fireworks weren’t over just yet.

After 6-foot-4, 210-pound defensive end Myles Mendeszoon registered another sack for the Hilltoppers, Ferrante picked off a Rebel pass and returned it 15 yards to the bank for a 43-0 lead with 8:02 to play.

“I just looked at the quarterback to find where the ball was going,” Ferrante said. “Once I saw it was a pass, I dropped back, saw he got smothered, basically, by Christian Hall. And when he threw the ball away, I just came up with it and ran it in for a touchdown.”

Surely, with a running clock, that’d be the end of it – but that wasn’t the case.

On South’s ensuing possession, Brosch entered the game at linebacker and came up with a 6-yard tackle for loss to force a third-and-long and another Rebel punt. On the next offensive snap by Chardon, Brosch turned around and broke loose on a 45-yard touchdown run with 2:43 to play for the eventual 50-0 final.

The Hilltopper sideline went wild for their senior reserve, who finished the game with a two-point conversion, tackle for loss and that end-zone find.

“Charlie is a great player,” Ferrante said. “He’s on our scout team all the time. He won’t ever stop. Say he gets hit or knocked down, he’ll get right back up. So, seeing him score that touchdown, he needed that. It showed that playing on scout team really will really pay off on Friday nights. It was insane.”