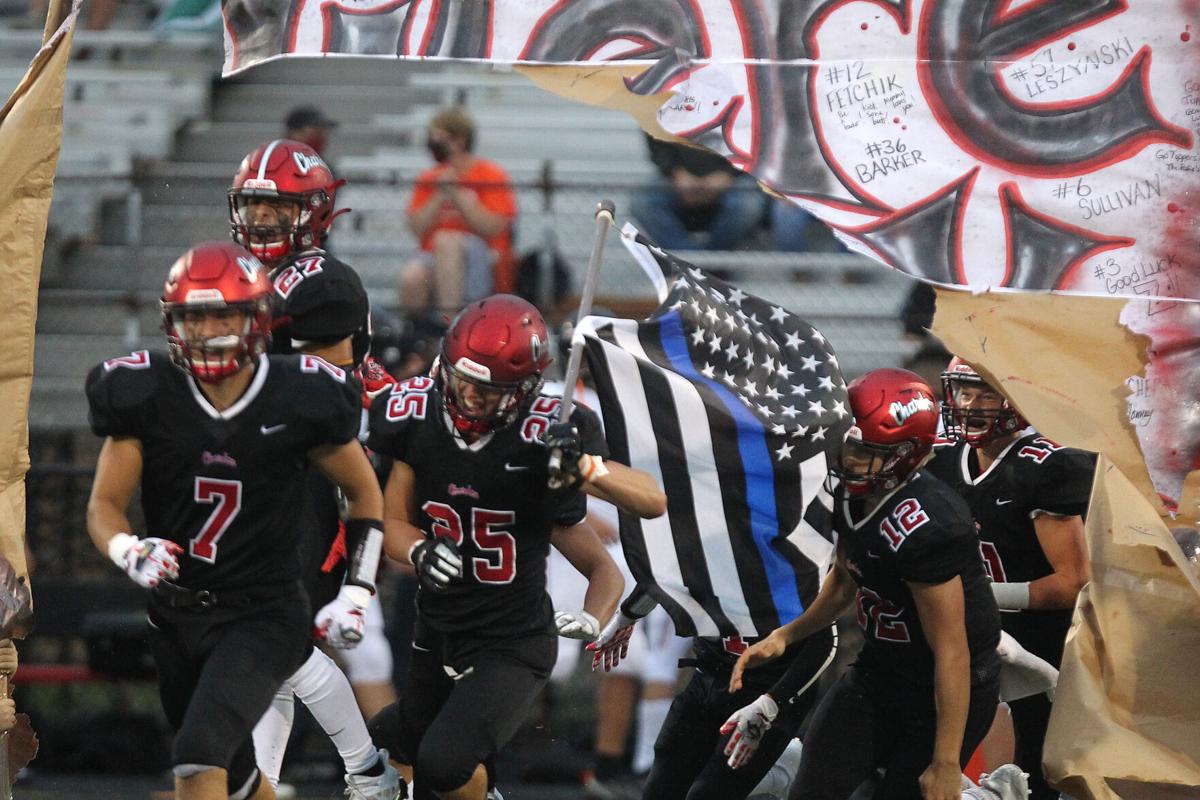 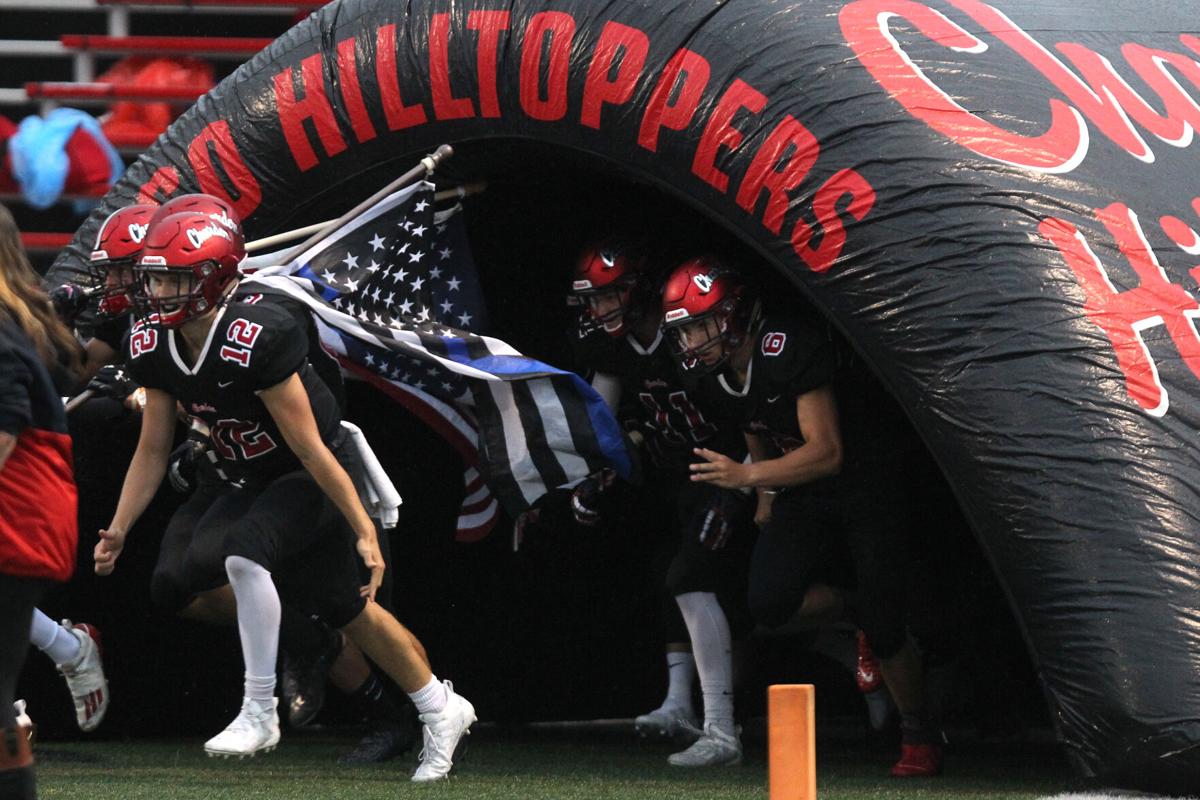 The Chardon High Hilltoppers football team may have defeated the Eastlake North Rangers at the home game last week, but the 42-7 final score was overshadowed in the days following by reactions to a player running onto the field with a Blue Lives Matter flag.

While some area residents took to social media saying the action was a show of support for Geauga law enforcement officers, others said the display was racist and discriminatory.

On Monday, the Geauga County Prosecutor’s Office changed its Facebook cover photo from an image of Chardon Square to a picture of a Blue Lives Matter flag. The prosecutor’s office did not return calls asking why the change was made.

The Aug. 28 Chardon flag event occurred on the same weekend as protesters marched on the streets of Kenosha, Wisconsin and Portland, Oregon demanding justice for individuals who had been injured and fatally shot on the streets.

Chardon Local School District Superintendent Michael Hanlon told the Times on Monday that he was not made aware of the decision to carry the Blue Lives Matter flag onto the field before the game. Dr. Hanlon said he was not at the football game.

School board member Keith Brewster said in an email that he thought the superintendent was handling the situation well, on top of the other circumstances facing the district.

“Being the first week of school, at the start of an utterly unique school year, his top priority today is making sure everything runs as smoothly as possible for our children,” Mr. Brewster said.

Dr. Hanlon said he was told that the student chose to carry the flag to show respect for a member of the coaching staff who is a police officer.

The student and his family declined to talk to the Times about the incident.

“The school district is decidedly anti-racism,” the superintendent said. “We speak to that in our school district policies and kind of the underpinnings of the school district. It was not organized by the coach. My understanding from researching the matter is that this was organic, it came from the students as a sign of support that they wanted to do.”

On Tuesday, Geauga County commissioners called for the school superintendent to step down after his measured response.

In response to the incident, Dr. Hanlon said that the district is looking to hire a diversity consultant to work with Chardon district officials.

“I think it would be premature to indicate what steps we took specifically, but we are interested in working with a consultant to advise our school district on next steps that would work and help us move forward,” he said.

Dr. Hanlon released a letter to parents and teachers on Monday afternoon stating that district policy does not allow engaging in political activities. “In addition, measures will be put in place by our athletic director to review any planned pre-game displays for possible connections to any form of discrimination of particular political views,” he stated.

Dr. Hanlon said he found out about the flag from the video making the rounds on social media Aug. 29, the day after the game. The video clearly shows the player, a senior at Chardon High School, running onto the field, bearing the flag with its thin blue stripe while another player toted a traditional American flag.

“As a school district we absolutely recognize the significant impact of this event and the discussion that occurred in our community in the following days,” Dr. Hanlon said in the letter to the community. “It will be important for us to use this as a learning opportunity and to grow stronger as a school district.”

While most of the people who saw the video, which was mostly distributed via Facebook, agreed with the team’s decision to carry the flag, others opposed it. One Chardon alumna posted a remark saying that she was “embarrassed and horrified” to be a Chardon graduate. The post was taken down later. She said in another Facebook post that she had received threats against her family.

This came after a Facebook group called “Meanwhile, in Geauga County” posted a picture of her initial comment with the provocative caption, “Make her famous.”

The alum who removed her comments later wrote, “I deleted that post because the horrifying name calling back and forth is not something I support or condone. I’m sorry if you disagree with me but I will always support empathy and helping others.”

Another resident posted on Facebook, “Chardon has never been home to me. All I ever saw was blatant homophobia, racism, sexism, and the bad this world entails. A white, middle-class, Christian town with no room for growth or change or difference of any kind.”

Comments from the administrator of the Meanwhile, in Geauga County Facebook group made disparaging remarks in response to Dr. Hanlon’s letter to the community.

“Very disappointed,” one group member responded. “We should not have to be silenced by supporting our law enforcement. Shameful.”

Another resident stated on social media, “Speaking as a black person that lives and works in Chardon, and somebody who has grown up around police culture, the police in this town are top notch.” This resident commented on the original screenshot of the controversial post in the Facebook group. “Now I’m not saying that it doesn’t exist, but this is the most non-racist town I have ever lived in.”

In response to Dr. Hanlon’s letter, a Facebook page was created on Tuesday for an event called “Support Chardon Football Players – Thin Blue Line,” which presents itself as a rally to support the Chardon football players in exercising their right to fly the flag. The event is scheduled to begin at 6 p.m. on Friday at the Chardon Memorial Field behind Chardon High School, when participants “will line the street outside of the football stadium,” the event listing states.

Chardon Police Chief William Scott Niehus released a statement after the football game saying officers appreciated the show of support from the players “as this has been an incredibly difficult and challenging time for many law enforcement officers across the country.”

Chief Niehus said his department has enjoyed a special relationship with the schools having provided programs for decades.

“We recognize that the Thin Blue Line represents either the best of, or worst of, what our profession has to offer depending on a person’s point of view. We understand that people frame what the line means to them based on a perspective that is unique to their own experiences with law enforcement.

“To us, the thin blue line represents the strength and courage of officers working together as a profession to make our community safe,” he said.

“It’s most important that we don’t lose sight that the members of the Chardon Police Department equally serve all persons who require our assistance without regard to race, creed, color, ethnicity, national origin, religion, sex, sexual orientation, or gender expression. When called upon we will respond,” he said.