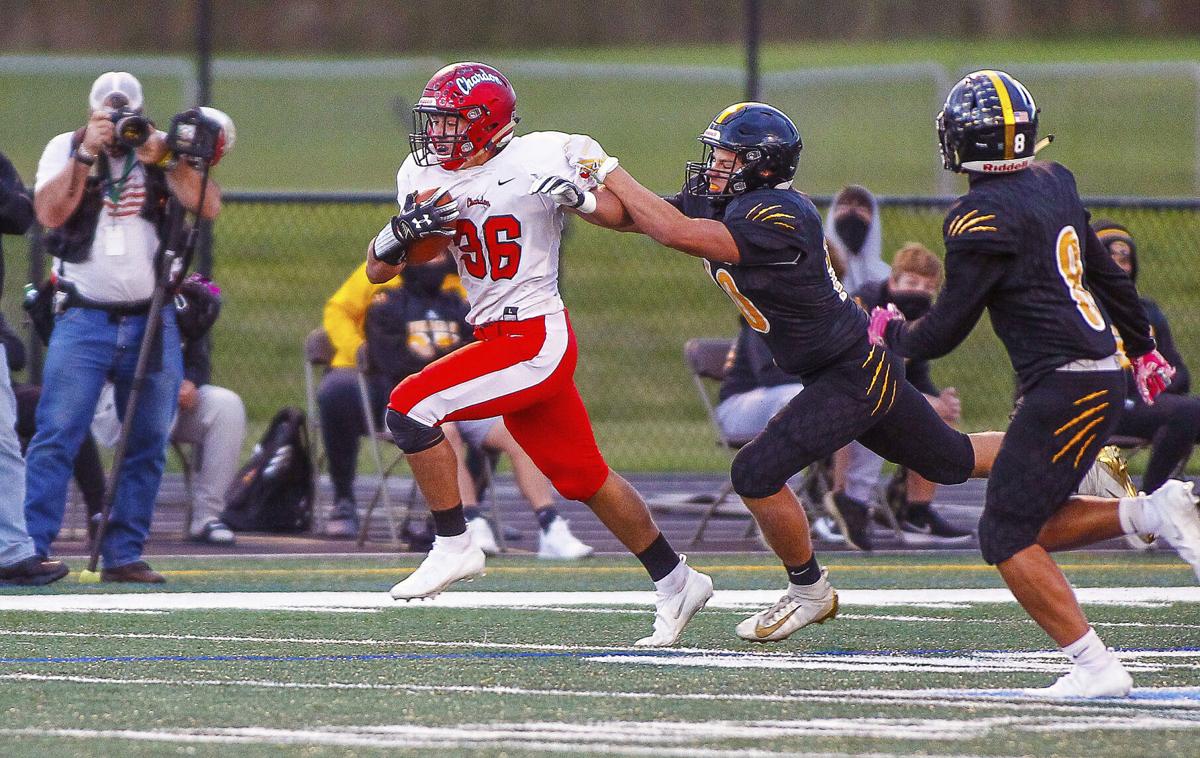 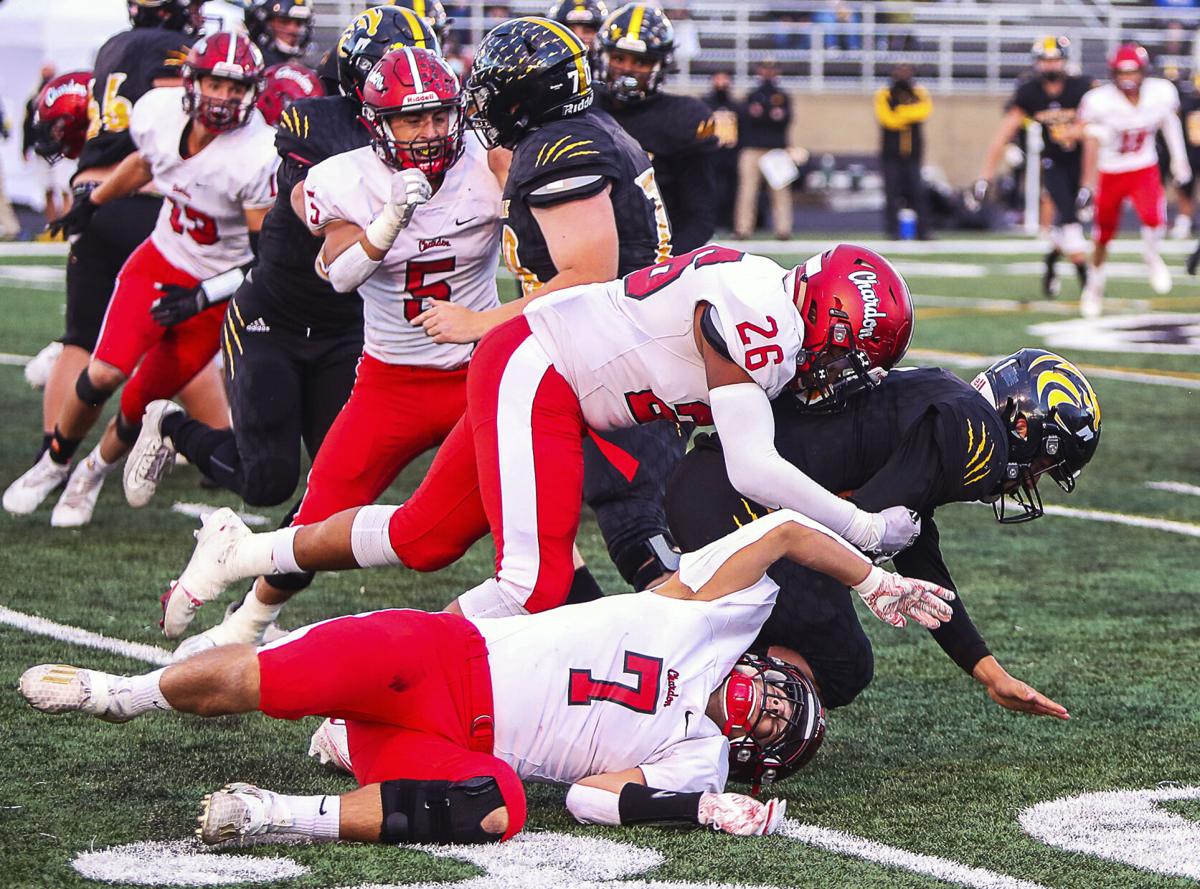 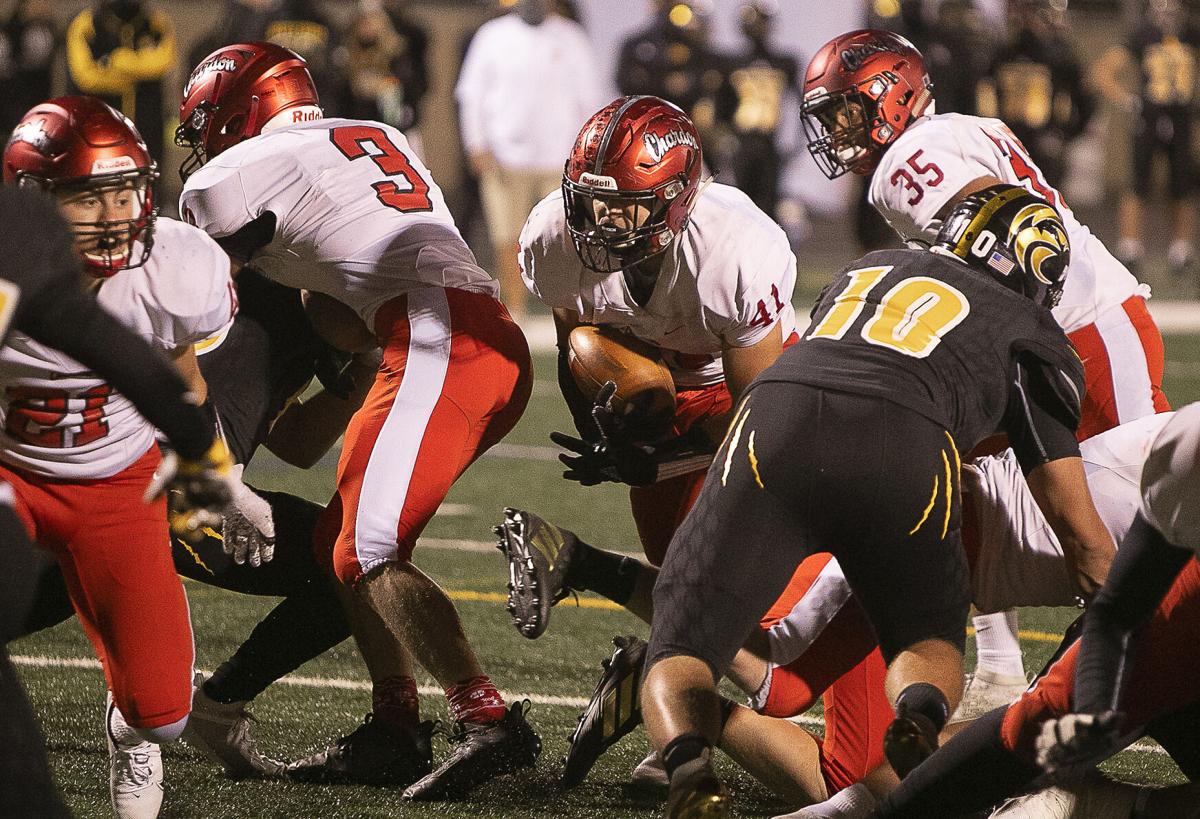 Chardon 190-pound junior fullback Sean Carr (center) finds a hole up the middle for a nice gain against the Beavers.

Chardon 190-pound junior fullback Sean Carr (center) finds a hole up the middle for a nice gain against the Beavers.

Kenston gridders get too much Molica in loss to North, 26-14

Chardon owned a 7-0 lead at halftime in what was supposed to be the premier gridiron collision in the Western Reserve Conference this 2020 campaign.

Capping off an 11-play, 80-yard drive, Chardon 170-pound senior running back James Pettyjohn punched in a 2-yard score with 7:34 remaining in the second quarter of a road battle against undefeated Riverside on Friday night in Painesville.

Riverside had a chance to tie it up before the break, but Chardon 6-foot-5 senior safety Brady Toth broke up a 9-yard pass into the end zone. Riverside’s ensuing 26-yard field goal attempt was no good as time expired.

While Riverside hadn’t surrendered a defensive touchdown through its first three games, Pettyjohn and company said there’d be plenty more where that came from, as the Division II Beavers (3-1) were no match in the second half against Division III AP No. 1-ranked Chardon (4-0). The Hilltoppers put together a 35-7 slamming.

“We’ve proven to be a second-half football team, for sure,” Chardon 10th-year head coach Mitch Hewitt said. “I’d still like to get us figured out in the first half, but defensively we’re really good.”

Through four weeks of football, Chardon has scored 49 first-half points and 115 second-half points, making the necessary adjustments despite only having 10-minute halftimes this season, per Ohio High School Athletic Association adjusted guidelines.

Hewitt said Chardon has so much in its playbook that sometimes halftime adjustments get too much credit, and rather it’s ultimately his players who still have to execute their assignments that were given to them in the first half.

“And I think our conditioning has been very good this year,” he said. “We’ve run our kids more this year than we ever have before, and I think they’ve embraced it, because they’re seeing it pay off now in the second halves. They’re believers in it.”

Out of the third-quarter gates, Chardon 6-foot-1 senior quarterback Drew Fetchik dialed up 6-foot-2 senior running back Blake Barker on a lateral pass to the outside, and Barker accelerated down the sideline for a 69-yard score.

Barker was slated mostly for his linebacker know-how before the season, but he’s arguably the fastest guy on his team.

“He’s a kid we’ve got to get the ball to more,” Hewitt said. “He’s a weapon. These two would argue about it all day long, who’s faster, James (Pettyjohn) or Blake (Barker), but I think, in the indoor season, Blake had a faster 60 split than James, but James would obviously argue and contest that. Between the two of them, they’re home-run hitters every time they touch the ball.”

Later in the third, Pettyjohn scored on a 4-yard carry for a 21-0 Hilltopper lead, and then Fetchik scored on a 12-yard keeper for a 28-0 upper hand with 1:12 remaining in the frame.

Chardon 190-pound junior fullback Sean Carr went on to enact a running clock on a 3-yard end-zone find with 7:08 remaining in the game.

Riverside’s offense finally got on the board with a 15-yard pass from 5-foot-8 senior quarterback Dom Lulow to 6-foot-3 senior receiver Matt Spofford with 2:14 to play for the eventual 35-7 final.

But the difference was Chardon’s defense, which picked off Lulow three times, including interceptions by Toth, 6-foot-4 junior Nathanael Sulka and 5-foot-11 sophomore Trey Liebhardt.

Like Hewitt said, Chardon’s defense is really good, with an emphasis on the word “really.”

Thanks to 90-yard fumble return by 230-pound senior linebacker Anthony Valocchi, Kenston was ready to battle in the fourth quarter of a home game against league foe Eastlake North last Thursday in Bainbridge Township.

A third-year starter, Valocchi interrupted a first-and-10 red-zone opportunity for the visiting Rangers (3-1) to score his first varsity touchdown and tie the game, 14-14, with 2:01 remaining in the third quarter.

Kenston also had a defensive touchdown the previous week, when 180-pound junior linebacker Braden Krupp had a 41-yard scoop to the house against Chardon – not quite as long as Valocchi’s.

“He was gassed, man,” Kenston ninth-year head coach Jeff Grubich said. “He took the ball away and just took it 90 yards to house, and it’s a credit to him. We were yelling as a coaching staff to rip the ball out, and he followed through with it. So, I’m really proud of that guy.”

But the Bombers’ offense never quite picked up down the stretch, and North’s offense kept grinding, as Ranger 5-foot-8 senior quarterback Chris Molica punched in his third and fourth touchdowns of the night to hand Kenston (1-2) a 26-14 defeat.

Molica completed his only passing attempt of the game for 25 yards, but the signal caller had 24 carries for 140 yards and four scores.

“He’s a good football player, and he was quick as heck,” Grubich said. “We’ve just got to do a better job as coaches and bottle him up. But, for the most part, our defense did a great job. So, I can’t fault the kids’ efforts or the coaches’ efforts. I mean, they’re doing the best they can.”

During North’s first drive of the night, Krupp recovered a Ranger fumble to provide Kenston’s offense a 34-yard field.

“That was Nikko’s first touchdown throw, so that was great,” Grubich said. “He made a great read to find the open hole in the defense, and it was a great strike to Carson.”

Georgiou would finish the night eight-of-17 for 33 yards, including four completions to 6-foot-6 junior tight end Ryan Miller for 19 yards, while Kenston 205-pound senior running back Stanley Sell had 13 carries for 64 yards.

Molica put the Rangers on the board with 1:43 left in the second quarter for a 7-7 game at intermission. Molica also scored on a 26-yard keeper for a 14-7 Ranger lead with 4:10 to go in the third quarter, before Valocchi had that 90-yard fumble return to even it up before the fourth.

“We felt great. We felt like the game was in anybody’s hands at that point in time,” Grubich said. “Our kids were fighting, and were just looking for some more positive plays on offense, defense and special teams. We fought; we battled; the ball just didn’t bounce our way.”