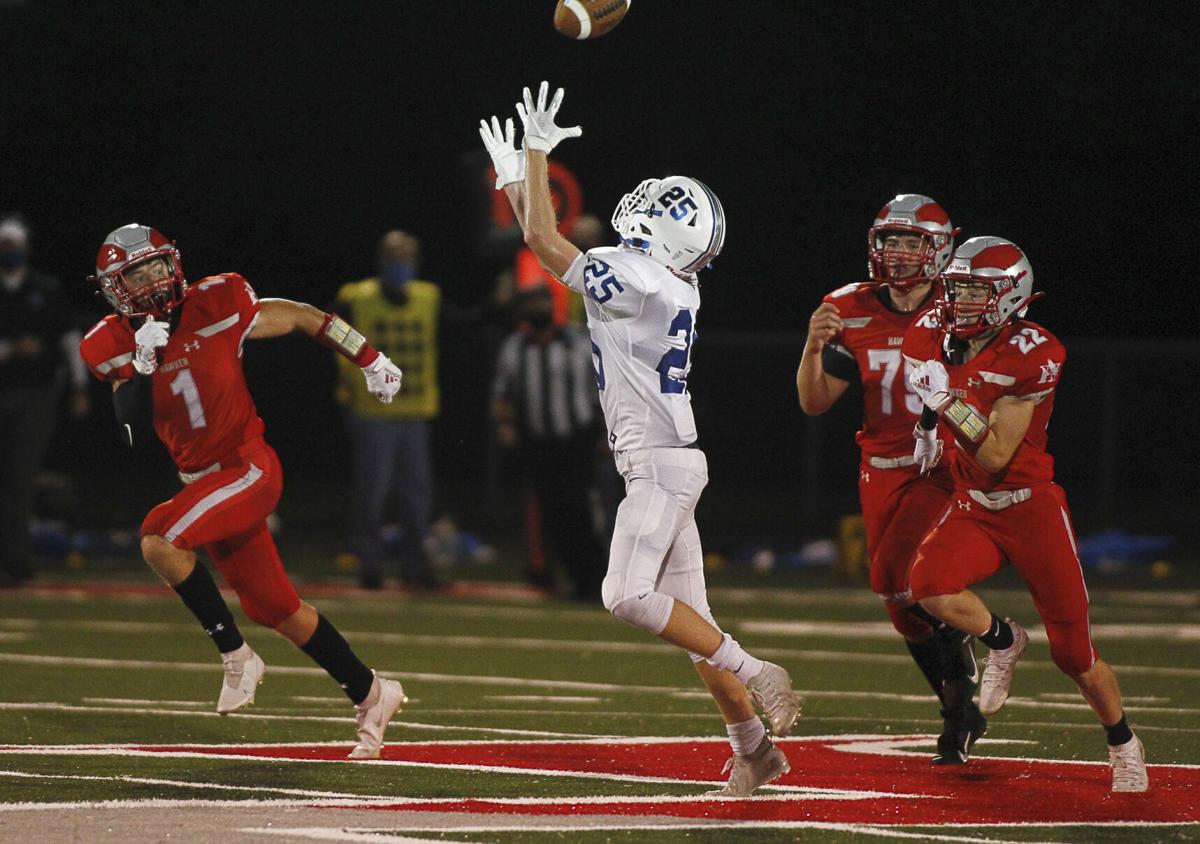 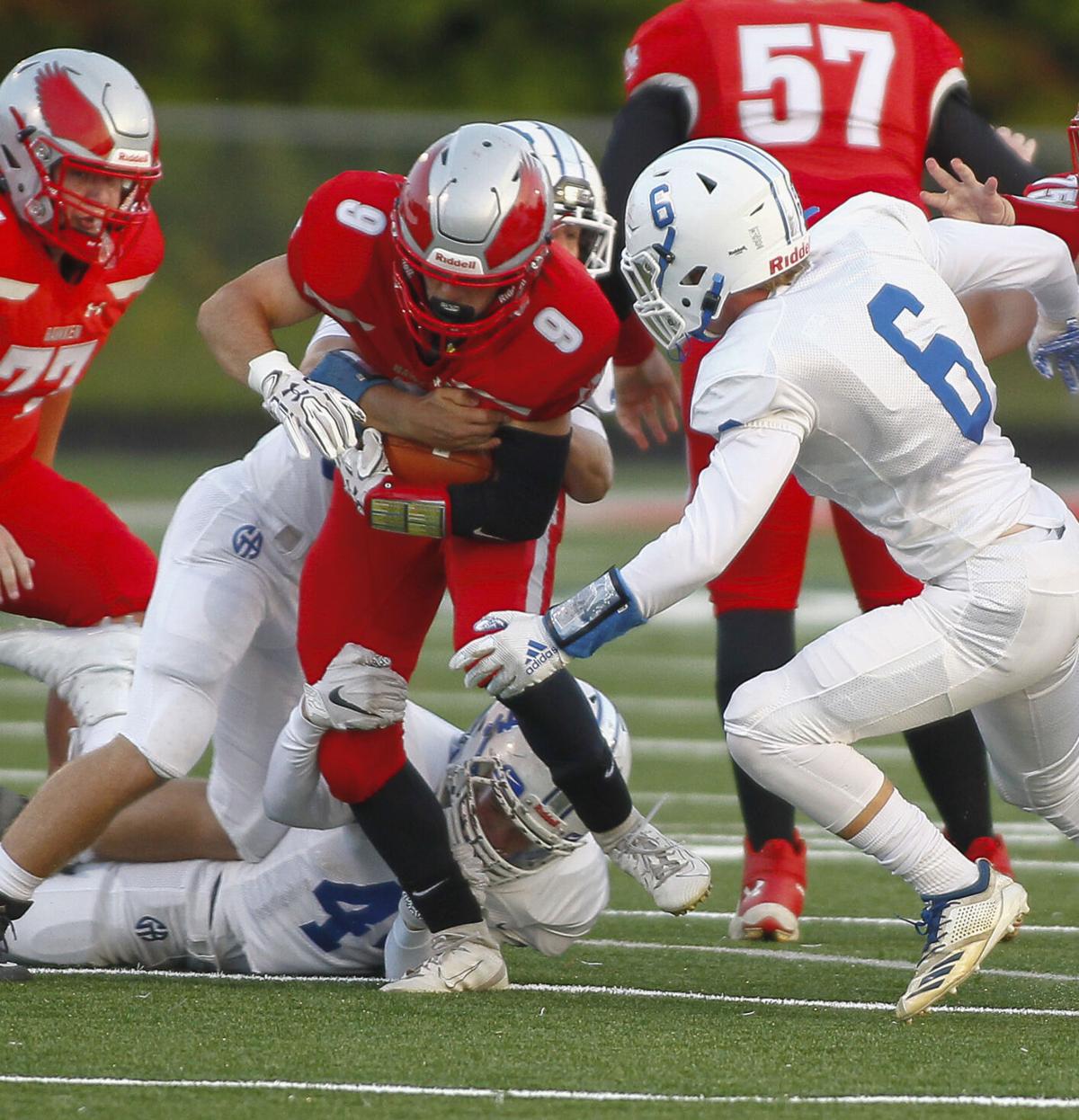 A slugfest that featured nearly 1,000 yards of offense, the Gilmour Academy gridders (2-2) had the explosion plays necessary for a 41-22 road whipping of rival Hawken School (0-1) last Thursday night at Walton Stadium in Chester Township.

With the Hawks committed to stopping the run, Gilmour’s playmakers were off to the races any time they broke through to the second level.

“Hawken was just trying to stop the run, and they were doing some things we thought we could catch them on,” Gilmour sixth-year head coach Chris Kosiorek said. “But the big chunk plays are what you’re looking for, and that always stresses the defense. We just kept the ball, and we didn’t turn it over. So, those are all recipes for a successful night.”

Harper got the end-zone party ignited on a 78-yard touchdown run just 39 seconds into the game, and then Gilmour 6-foot-2 junior quarterback Thomas Richardson dialed up Shepherd on a 73-yard touchdown toss for a 14-0 Lancer lead with 2:28 left in the opening frame.

Richardson, who completed seven passes for 228 yards with three touchdowns, dialed up Shepherd for another big touchdown in the fourth quarter.

“Both of them were amazing, honestly,” Richardson said of those two scores. “I hadn’t really completed a pass to Charlie Shepherd outside of our Trinity game on a little corner route. But he’s just been working hard at practices, working hard on his routes and his footwork. So, I’m really proud of him for that.”

Richardson also had a 75-yard touchdown toss to McCrone with 1:04 left in the half for a 21-0 Lancer lead at intermission.

After the break, Harper scored his second touchdown on a 58-yard run for a 28-0 advantage with 9:50 to go in the third. Harper finished the game with 15 carries for 265 yards.

But that lead got a little uncomfortable when Hawken answered on back-to-back scores, first on a 34-yard touchdown run by 6-foot-1 junior quarterback Terrence Robinson and then a 14-yard touchdown toss from Robinson to 6-foot-4 senior receiver Stone Zashin to cut their deficit, 28-14, with 2:22 to go in the third quarter.

“With the young team that we have and the injuries that we have, you know, you’re looking for a lot of guys to step into a role they’re maybe not used to playing,” Kosiorek said. “So, they did a nice job of, when Hawken cut it to 14, of just pulling away and understanding that these are the games we’ve got to be able to finish, and that’s what they did this week.”

Gilmour had played with multiple possession leads the previous two weeks – a 16-6 advantage against Warrensville Heights and a 28-14 upper hand against Trinity – but ended up losing both of those games.

Against Hawken, the Lancers answered with a 7-yard touchdown run by Richardson to push the lead back up to three possessions, 35-14, with 10:35 to play.

“It was huge. We really did need that,” Richardson said. “I could tell that my guys were starting to doubt themselves a little bit, and me running that in really hyped everybody back up and got everybody back up to where we should be.”

Gilmour outgained Hawken, 571 yards to 413 yards on 18 fewer plays, while both teams moved the chains 18 times.

For Hawken, Robinson was 18-of-29 passing for 197 yards and had 21 carries for 131 yards, while Miller had 18 carries for 93 yards, Zashin had five catches for 37 yards and 6-foot senior Cooper Jared snagged three receptions for 62 yards.

University School (1-3) coughed up a pair of turnovers in the first quarter that Lake Catholic (3-1) capitalized on, and the Preppers never recovered during a 34-7 road loss last Thursday at Jerome T. Osborne Stadium in Mentor.

The host Division IV Cougars opened the scoring on a 33-yard field goal by senior Luke Hadley for a 3-0 lead with 7:45 to go in the first quarter.

On University’s ensuing possession, a bad long snap was recovered by Lake Catholic on the US 21-yard line, and the Cougars capitalized on 215-pound senior Ryan Joy’s 2-yard touchdown for a 10-0 upper hand with 4:18 left in the frame.

Malchesky then went to work in the second quarter with 5- and 24-yard touchdown runs for a 31-0 Lake Catholic lead at intermission.

University got on the board with a 7-yard touchdown toss from 5-foot-8 senior quarterback Solomon Perez to 6-foot-1 junior receiver Bryce Hodge to cut the deficit, 31-7, with 3:38 to go in the third.

Lake’s Hadley then booted another 33-yard field goal with 9:02 remaining for the 34-7 final.

Lake Catholic outgained University, 388 yards to 79 yards, with the Cougars pounding the pigskin for 332 yards rushing.