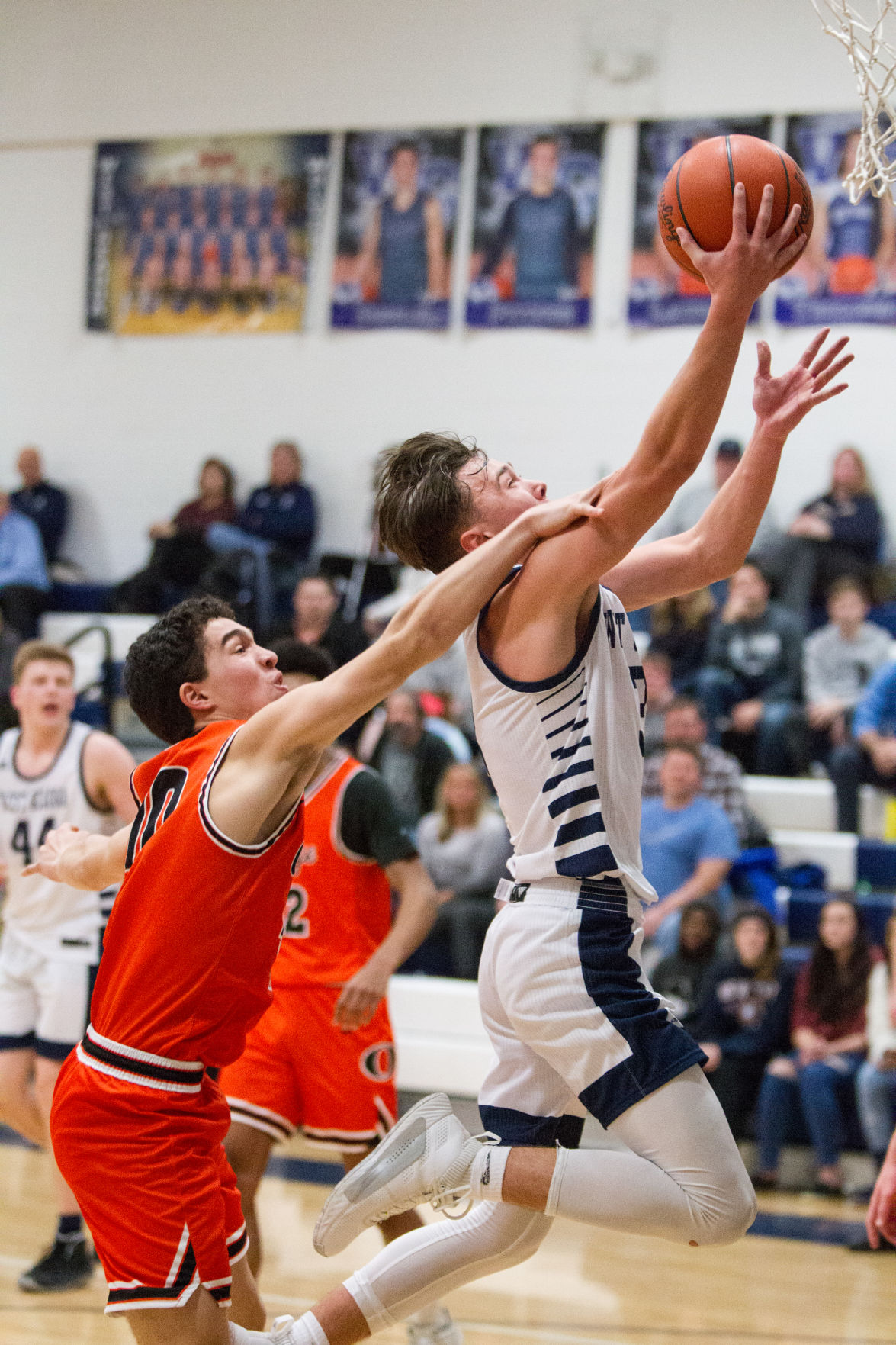 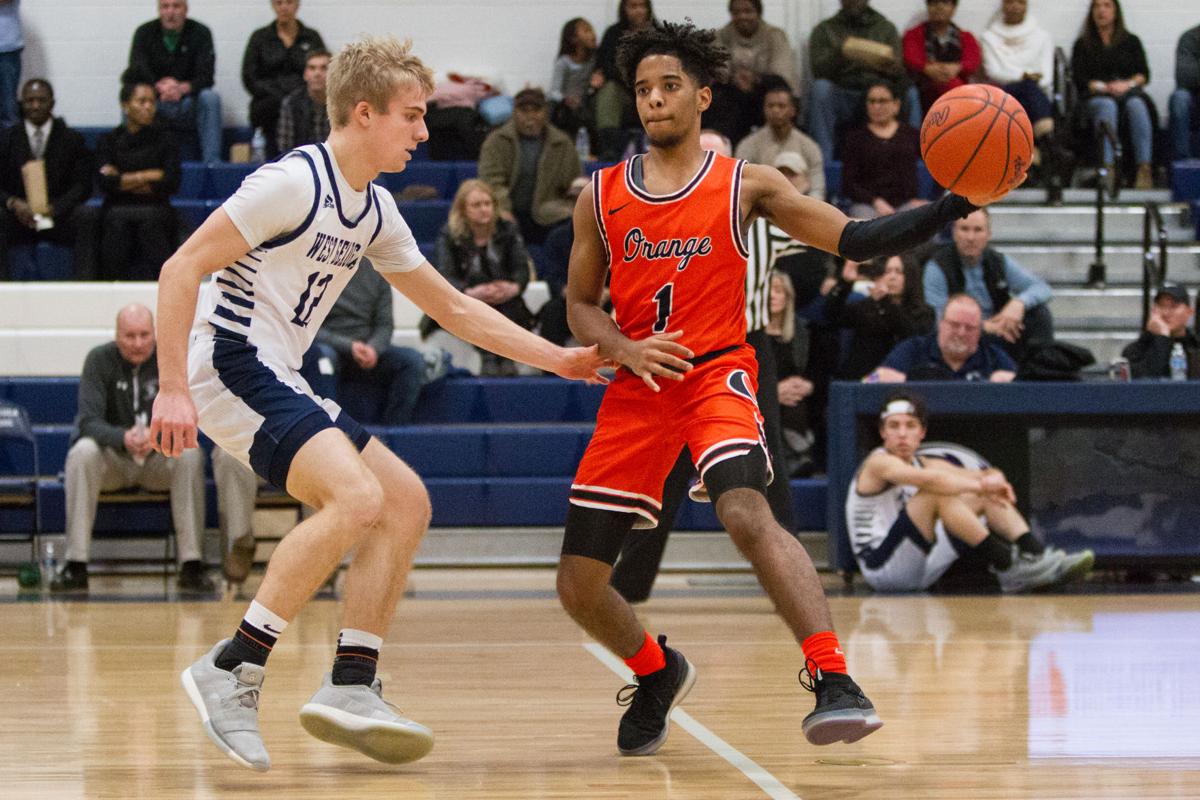 West Geauga 6-foot-1 senior Peyton Bissler swung his elbow to create some space from the harassing defense of Orange 6-foot senior Nick Walters and was called for an offensive foul 2 1/2 minutes into the game.

The Lions owned just a 2-0 lead on the road Tuesday night in Chester Township, but they were licking their defensive chops knowing that it was Bissler’s second foul and they wouldn’t have to worry about him driving the lane or pulling up for jumpers for the remainder of the half.

The Wolverine standout entered the Chagrin Valley Conference hoops collision averaging 20.6 points per game and possessed the handles necessary to break down the full-court pressure and settled zone defense that Orange (6-6, 6-2) brought to the table.

“It was tough,” West Geauga fifth-year head coach Jeff Javorek said. “Honestly, this is the first game he’s ever been in foul trouble. So, without him out there, it gets a little nerve-wracking. But the other guys stepped up.”

Bissler didn’t hide his frustration walking to the bench. After all, his season low of eight points came during a 68-52 loss against Orange in the second game of the season on Dec. 6, and he was ready for some redemption.

But if the West Geauga cagers (8-5, 6-3) were going mark the dub column with a 56-49 victory on Tuesday, they’d need Bissler’s composure and aggressiveness in the second half.

In the meantime, West G 5-foot-10 senior guard Aidan Pitcock handled the ball, and then 6-foot-7 junior Josh Irwin, a Division I prospect who entered the night averaging 21.9 points per game, carried the offensive load.

“I just pick a side and go,” Pitcock said about taking on Orange’s pressure and getting his Wolverines set up in the half court. “I just stay patient, pick a shoulder to go by, and it usually goes pretty well to get us in the offense.”

Pitcock would finish the night with eight points, four rebounds, four assists and a steal when it was all said and done.

After Orange 6-foot-5 senior Donald Hughes got the Lions going with a pair of early buckets, Pitcock dished out a feed to Irwin for a 3-pointer and a 7-6 lead the Wolverines never relinquished.

Once Irwin got hot, he stayed hot for the entirety of the first half, shooting four-of-seven from deep to pave way for 18 of his game-high 25 points before intermission. West Geauga owned a 29-24 lead at the break with Bissler on the bench for 13 1/2 minutes.

While the Lions’ defense knew Irwin was coming, it’s difficult to guard a 6-7 guy who can rain triples from NBA range, as well as post up with spin moves down low.

“It’s been that way my whole life,” Irwin said about finding ways to score against a defense that was keyed primarily on him. “So, I’m kind of used to it by now. It makes it really, really hard when (Bissler) is out. So, I had to move off the ball really, really well to get open shots, and I did.”

In addition to his 25 points, Irwin finished with 14 rebounds, two assists and two steals. He specifically brought out the Windex to clean the glass with seven boards in the second quarter.

Also stepping up early, West G 6-foot junior guard Anthony Formichelli scored five of his seven points in the first quarter. He also finished the night with five boards, three coming on the offensive glass. He started the season on the bench before earning his starting role.

“Honestly, Anthony Formichelli has been the difference for us,” coach Javorek said of his Wolverines extending their win streak to four games. “We moved him into the starting lineup, and he just brings toughness and a defensive presence.

“So, that’s what kind of ignited us – starting him and getting him going on the defensive end. And then our other guys have bought in defensively, which is what’s made us successful.”

After Orange had five players in double-figure scoring during their previous matchup, West Geauga’s all-inclusive defense limited the Lions to just one player in double figures on Tuesday – Hughes had a team-high 17 points with six boards, two assists, two steals and three blocks.

“I think we just all had a chip on our shoulder from the last time we played them,” Pitcock said. “We were just pretty eager to play better defense, stop what they were successful with the first time. We knew our offense would be there. So, we just played our game.”

Ten of Hughes’ points came in the third quarter, helping the Lions erase a seven-point deficit to tie the game, 35-35, with 4:30 to play in the frame, but then Bissler drew two shooting fouls and Pitcock laid one in to reopen a two-possession lead.

With Irwin clocked in all game, he got a bit of a breather when Bissler was back in action to score eight of his 12 points from the foul line in the second half.

“It’s relieving when he takes over,” Irwin said about watching Bissler create for himself. “When he takes over at that end and draws fouls, there’s no way to really stop him, because he’ll get inside, he’ll pull up in your face – he really helps slow the game down.”

West Geauga’s largest lead of the game was, 44-35, after 6-foot-2 junior Keegan Barnhart sank a pair from the line with 1:00 left in the third quarter.

“That’s kind of been our M.O., is we play good defense, and then Josh picks up Peyton, Peyton picks up Josh, and we get a couple other guys chipping in four, six, eight points,” Javorek said. “And that’s how we’ve been successful the last couple games.”

Up next, West Geauga will travel to take on Lakeside at 7 p.m. Friday in Ashtabula.