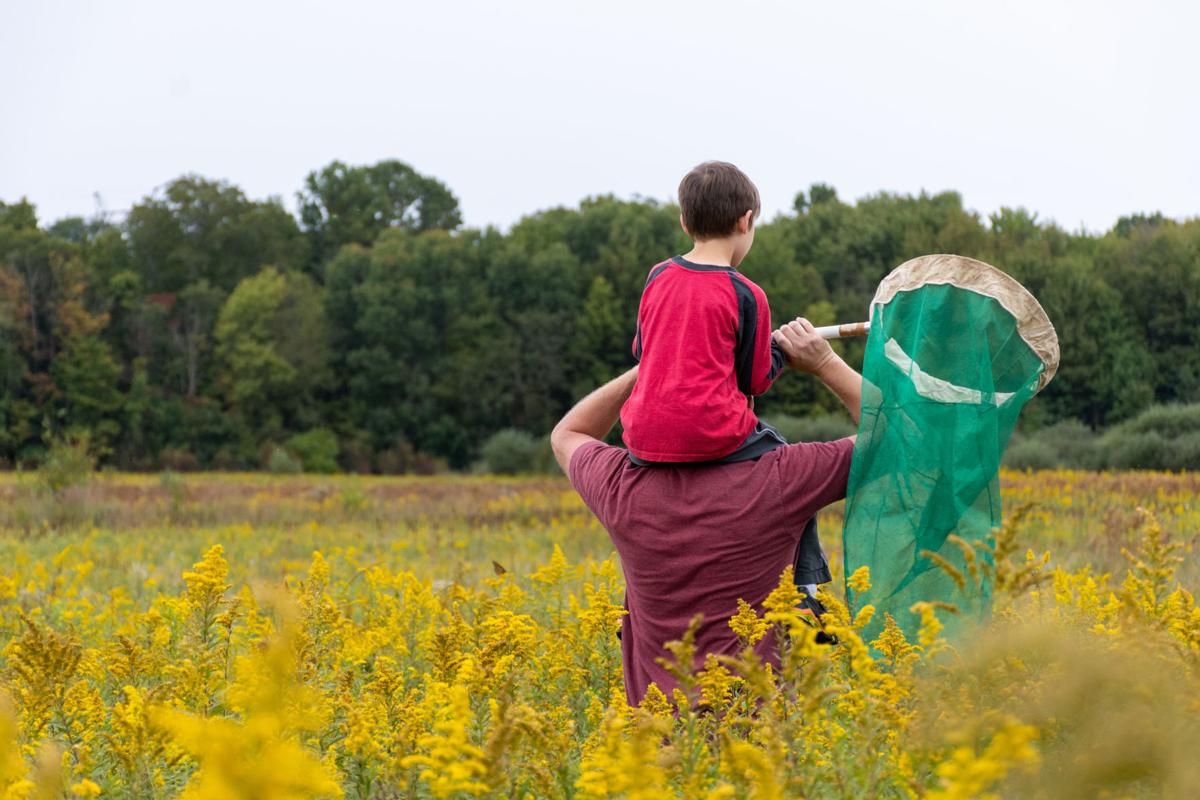 Adam Winemiller, 34, of Middlefield carries his son Andrew, 7, on his shoulders as they look for butterflies during Geauga Park District’s Monarchs and Meadow Insects event last Sunday at Frohring Meadows in Bainbridge. Residents searched out butterflies to net and tag for keeping record of their journey south. 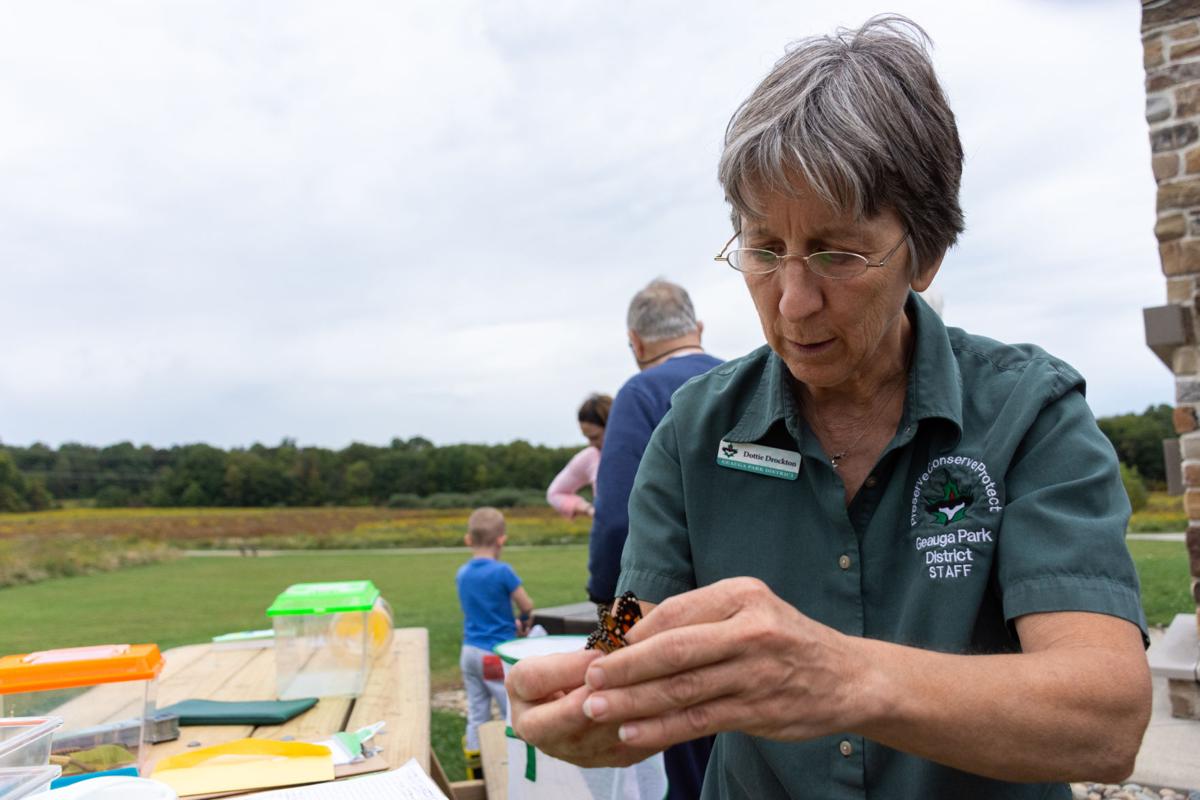 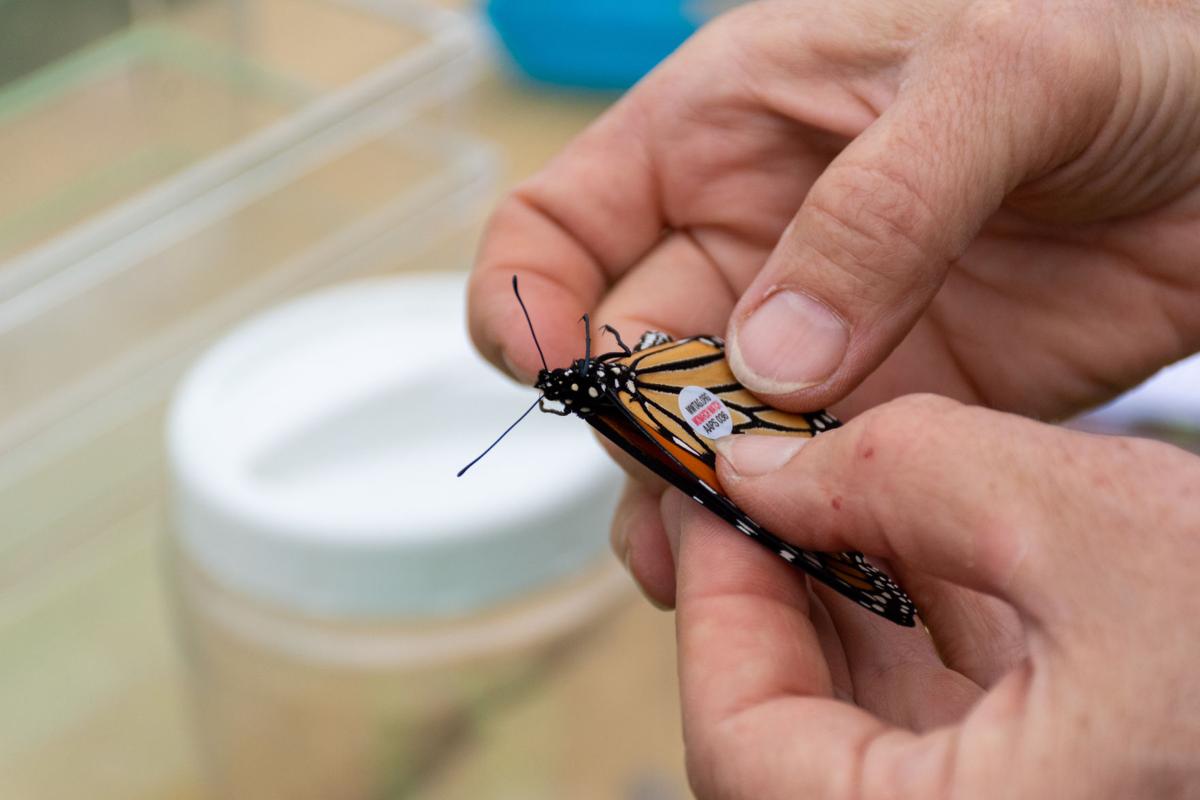 Dottie Drockton, Geauga Park District naturalist, tags a monarch butterfly to be recorded by Monarch Watch for its 2,000-mile journey to Mexico.

Adam Winemiller, 34, of Middlefield carries his son Andrew, 7, on his shoulders as they look for butterflies during Geauga Park District’s Monarchs and Meadow Insects event last Sunday at Frohring Meadows in Bainbridge. Residents searched out butterflies to net and tag for keeping record of their journey south.

Dottie Drockton, Geauga Park District naturalist, tags a monarch butterfly to be recorded by Monarch Watch for its 2,000-mile journey to Mexico.

Butterfly enthusiasts gathered last Sunday at Frohring Meadows in Bainbridge to tag monarchs before they embark on their 2,000-mile journey to Mexico.

Under the leadership of Geauga Park District naturalist Dottie Drockton and certified volunteer Sister Julie Boehnlein of Notre Dame, residents got out their butterfly nets and took to the wildflower filled fields in search of the beautiful winged insects.

Mia Cirino, 5, and her father, Rob, came back with a monarch. “She loves bugs and catching things and knows a lot about butterflies,” Mr. Cirino said of his daughter.

Adam Winemiller of Middlefield has been taking part in the monarch tagging for seven years with his five children. “I love doing it with the kids and they enjoy coming out here.”

The goal Sunday was to net and then tag monarch butterflies to keep a record of their journey south. Monarch Watch keeps the information from the tag on file.

“Butterflies are insects everyone loves,” Ms. Drockton told those gathered at the event as she displayed a lesson with drawings and graphics. Other species of butterflies stay over the winter as a chrysalis or as an adult hiding under tree bark, she explained pointing to the golden rod flowers in the meadow where monarchs were flying about.

“This is a whole field of golden rod,” she said and the monarchs feed on the nectar, “tanking up” and storing fat for the long trip ahead.

Sister Boehnlein, who has raised monarchs, recalled hearing the caterpillars munching on the leaves. When a caterpillar is big enough it rids itself of the black, white and yellow skin.

They spend two weeks as a caterpillar and change to a chrysalis for two weeks. Right before they emerge, the chrysalis becomes translucent and their butterfly wings can be seen, Ms. Drockton said.

Eventually, it pops out and then pumps its wings with fluid from its body. “In an hour, it’s a beautiful butterfly,” Mrs. Drockton said.

“It flaps its wings and gets ready to take off and finds flowers to feed on,” she said. They sometimes live only a month as an adult, mating and laying eggs in the long days of summer. The monarchs tagged Sunday are expected to fly south to the Sierra Madre Mountains in Mexico.

On their way to Mexico they meet a number of threats including cars and trucks, predators such as wasps and spiders as well as pesticides and ice storms. They spend the winter in Mexico living now through March of next year, Ms. Drockton said.

They then head back north from Mexico, such as to Texas, for food and, most importantly, the milkweed plants to lay their eggs. The milkweed serves as their host plant for nectar and laying eggs.

The tagging process is an ongoing project, and the research gives scientists a range of information including locations of monarch migration.

Ms. Drockton explained how to creep slowly up to the butterflies in order to catch them in a net without injuring them. Everyone took a net as they prepared to go out to catch and tag the monarchs.

Ainsley Bohler, 4, of Bainbridge was accompanied by her mother Garren as well as her grandmother Kathy Bohler. Ainsley came back with a monarch to be tagged.

Rowan Goglin, 12, was there as part of his science project at Kenston schools. By chance, he picked up a monarch that was being eaten by a praying mantis.

By the end of Sunday’s session, the participants had tagged close to 50 monarchs.

Ms. Drockton noted that the monarch populations are on the decline. They are important in the natural world as good pollinators of plants. Just as important is their beauty. “It is something we don’t want to disappear in the future,” she said.