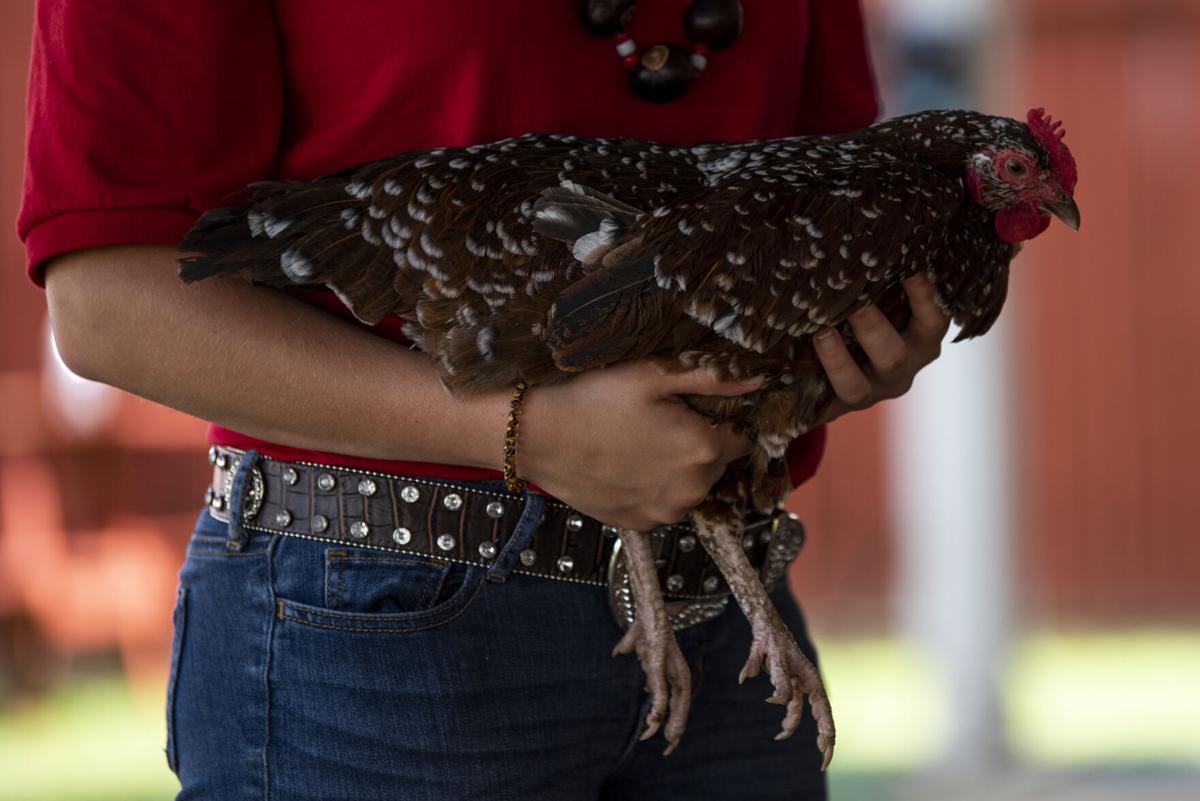 Liberty Masher of Chardon holds her rooster, Pebbles, in the small arena after the Junior Fancy Poultry Show during the 198th Great Geauga County Fair last Friday. This year, county fairs statewide were restricted to a Junior Fair due to the COVID-19 pandemic. 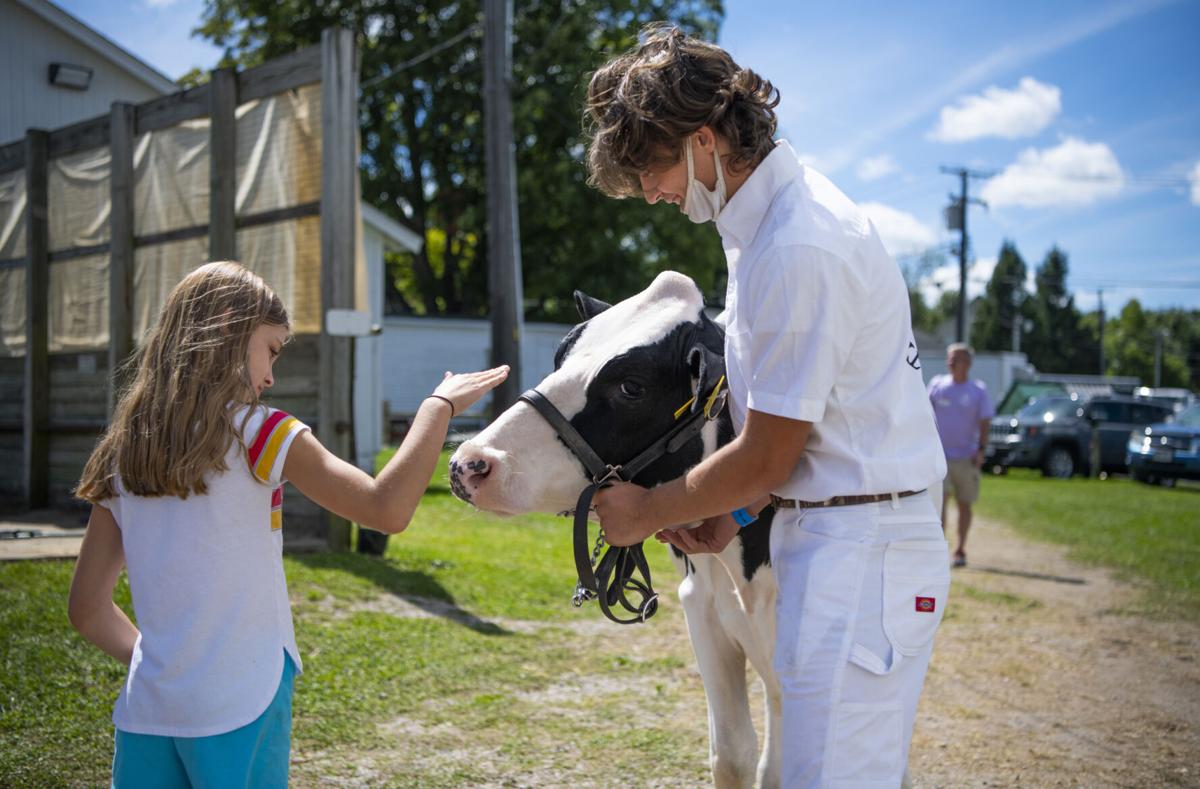 Liberty Masher of Chardon holds her rooster, Pebbles, in the small arena after the Junior Fancy Poultry Show during the 198th Great Geauga County Fair last Friday. This year, county fairs statewide were restricted to a Junior Fair due to the COVID-19 pandemic.

“Com’ on Riley!” “Go Maddie!” Cheers and hoofbeats broke the morning air as riders in jeweled jeans and belts circled the red, white and blue barrels. Some riders zipped through the cloverleaf pattern, while others took a more methodical approach. Lively yells from friends and family encouraged the riders.

“I’m sorry, that’s a no time,” the announcer proclaimed to one rider, who, though boisterously communicating with her horse, encountered some difficulty with the pattern. “That’s what I thought it would be,” she shouted in replied.

The 198th Great Geauga County Fair this past weekend was limited by the state to a Junior Fair due to the ongoing coronavirus pandemic. Though much smaller, the fair still buzzed with activity on the fairgrounds in Burton. No midway section swarmed with people, stands and rides, but the animal barn area remained lively.

The fair began on Sept. 3 and ended Sunday with fireworks.

During the daytime hours, the food and animal smells mingled together, with lowing cattle and loud-speakers as familiar sounds. In some ways the junior fair felt busier than normal with horse, chicken and swine competitions underway. The lemonade stand occupied the same corner spot, kids pulled at cotton candy and food stands lined the main animal barn road.

One little boy pulled three other small boys in a wagon down another road. Older boys hosed and scrubbed black and white cattle. And in between two barns, the caged turkeys raised a myriad of gobbles for passersby. Across the way, unoccupied stalls in the goat barn did little to reduce the barrage of high-pitched crying from the goats with one pen housing a family of young Nigerian Dwarfs.

Hiram resident Hannah Thompson, who turned 13 on Sunday, quietly watched the horse competition on the bleachers, ready to see her friend compete. A fun-filled weekend awaited the Thompsons. The family of nearly eight children (one on the way) celebrated one birthday last Thursday, the opening day of the fair, and still another on Saturday. Hannah, who is a member of Feathers and Fleece 4-H group, said she shows meat chickens at the fair, and on her birthday, Hannah also planned to compete in the style show with the poncho that she sewed.

“Riders, just so you know, you’re not allowed to hit your horses with the reigns,” the announcer admonished the competitors as Hannah discussed her meat birds. She shared her secret to fattening up her chickens by switching from chicken feed to turkey feed. Her three Cornish Rocks weighed about 9 pounds each. Last year at the livestock auction, she made $600 on her three meat birds. Accustomed to the birds being butchered, she said, “We also have egg layers, so we give all our love to them.”

After watching the horse competition, Hannah squeezed along the fence with her siblings and friends at the open-air chicken show. Nearby, Hannah’s father, Ron, sat under a tent inside the arena helping with the competition. Mr. Thompson readily gave “special kudos” to the Geauga County Fair Board and the Junior Fair Board for getting the fair together this year since the kids worked so hard.

At the chicken competition, the judge, wearing a chicken hat, entertained and educated his audience, admonishing them, when picking meat chickens, to avoid the “cheerleaders” and go for the “linemen” instead.

Though Hannah expected the fair to be different because of health requirements with spacing and other changes, she found it enjoyable, especially offerings from the food trucks. “I didn’t even know there would be food things going on – that surprised me,” she said.

Another 4-H participant, Liliya Zelle, agreed about the fair’s enjoyability. At the rabbit barn, Liliya cozied her grey and tan stripped bunny in her arms. The 14-year-old displayed the soft rabbit for her 4-H friends, Hailey Day of Auburn, (goats) and Lily Shott, of Newbury, (chickens) to see. Liliya, of Newbury, looked around the empty barn, saying in past years it was packed. She is a member of the Geauga Caprine Kids group.

Her Harlequin rabbits placed second in Best of Breed. A yellow, fourth-place ribbon hung on the cage as well, which Liliya took for Showmanship. The meat rabbits were part of a family of eight. She said rabbits are butchered between 8-12 weeks old so their meat is more tender. A little small, Liliya couldn’t quite get them to the right size for the fair. But her sister certainly had no difficulty with size, as her French Lop could nearly envelope three regularly-sized rabbits.

Back at the horse competition, a couple of small girls on large horses rode out of the arena back to the home barn to untack. Most of the 4-H competition horses are the leaner, standard breeds, but some stand out as the heftier, draft-type breeds. These sturdy horses, with their big hooves covered with long feathering, make for an awesome scene as their tiny pilots guide them through the patterns.

Aryanna Manista rode one such horse, her leased horse, Lord Sebastian of the Enchanted, who is a black and white Gypsy Vanner. Aryanna and her mother, Christina, groomed his abundant mane, tail and leg feathering to smooth perfection. Above the stall hung two large ribbons, a blue and a red, along with a trophy. Aryanna won the flag competition at this, her first fair, and came in second in the barrels.

The energetic 9-year-old bustled about Sebastian’s stall while he chewed on the hay that dangled from his mouth. She wants a horse of her own just like Sebastian, and she said the best part about riding Sebastian is everything. “Pick one thing,” her mom told her. “I can’t,” she replied. Lord Sebastian once had a “beard,” or long chin hairs, until he, in Aryanna’s words, “ate it off for breakfast.”