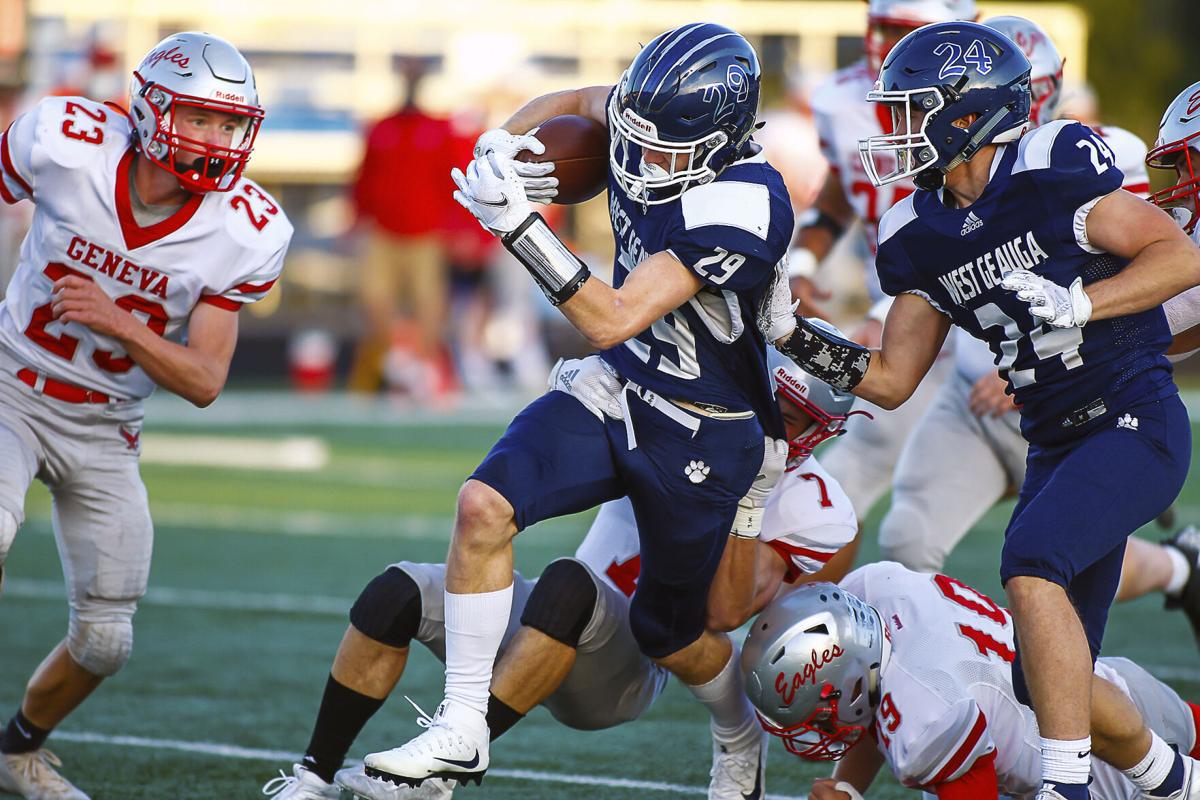 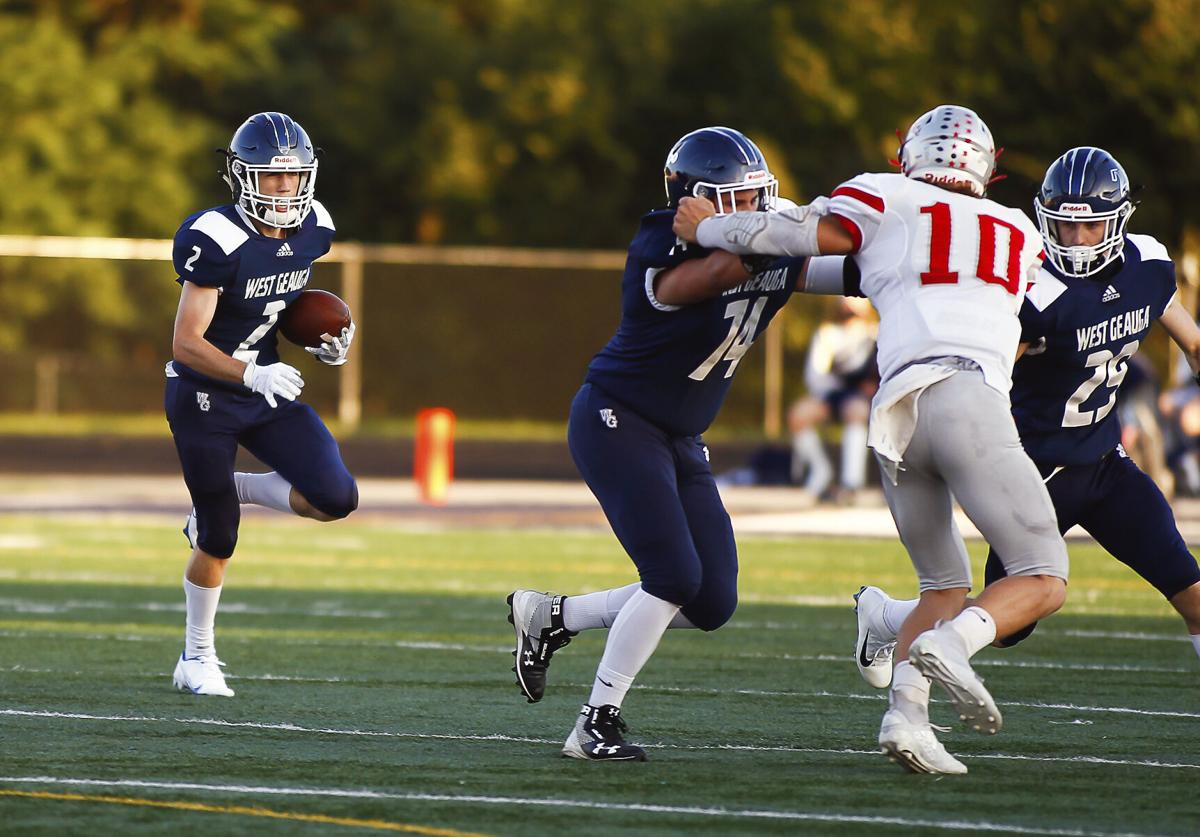 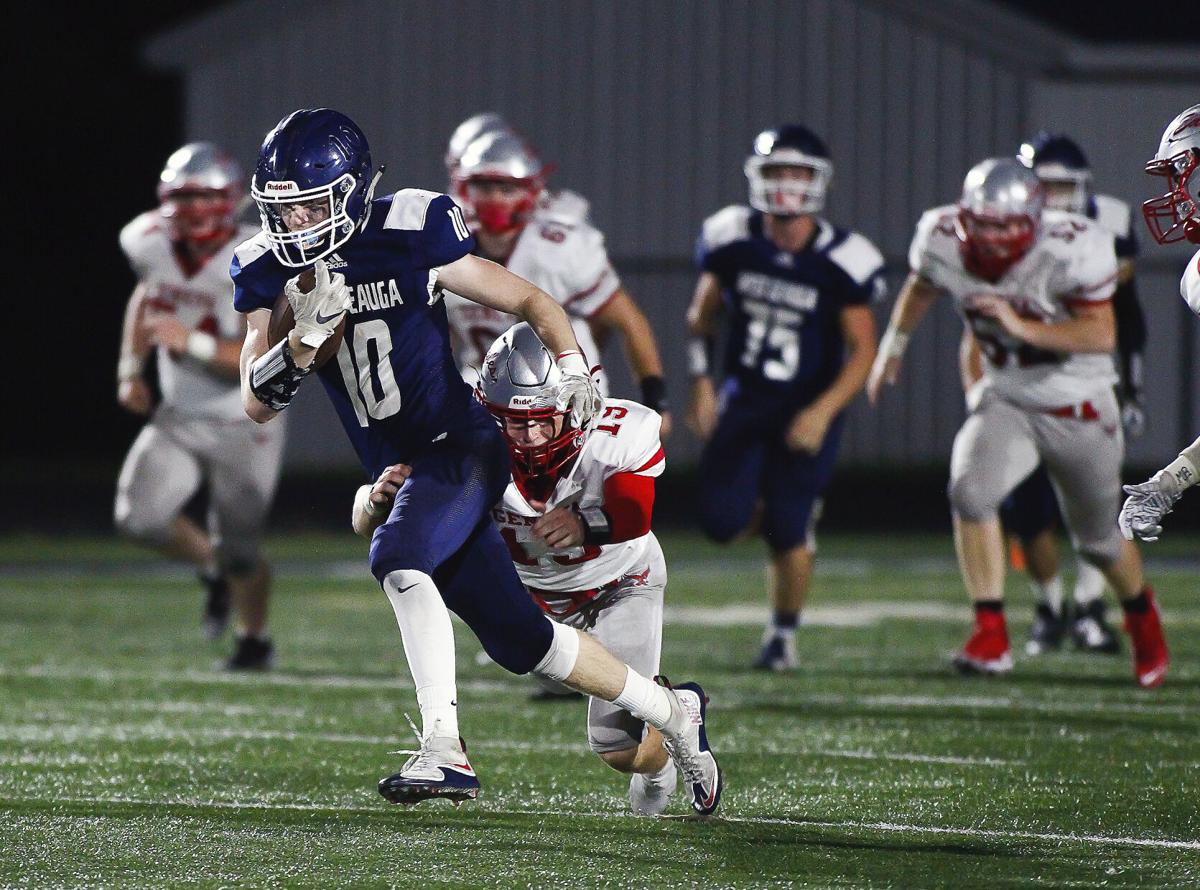 West Geauga 180-pound senior Peter Sanelli moves the chains with a diving Eagle tackler on his six during the Wolverines’ home loss on Friday.

West Geauga 180-pound senior Peter Sanelli moves the chains with a diving Eagle tackler on his six during the Wolverines’ home loss on Friday.

Without a winning campaign in seven years, the Chagrin Falls gridders improved to 3-0 for the first time since 2012 during their 24-14 home battle against fellow Division IV foe Villa Angela-St. Joseph on Friday night at C.S. Harris Stadium.

Behind a pair of fourth-quarter interceptions by senior linebacker Josh North and senior defensive back Miguel Demastus, Chagrin Falls scored 10 unanswered points to fend off the Vikings, 24-14.

Overall, the Tigers’ defense held VASJ (0-3) to just 200 yards on 44 snaps, with the Vikings getting 12 first downs. Chagrin Falls has surrendered 27 points through three games this season.

Offensively, Chagrin Falls was headlined by 140-pound senior running back Cam O’Connor, who had 18 carries for 155 yards, including a 56-yard touchdown jaunt that put the game out of reach, 24-14, with 3:46 remaining.

Back in action after missing last week with a minor injury, Chagrin Falls 170-pound senior running back Xavier Perez had 11 carries for 68 yards.

VASJ answered when 150-pound senior back LaVelle Smith found the end zone on a 5-yard carry to tie the game with five minutes left in the half.

The Tigers reclaimed the lead when Pierce found the end zone on another keeper, this one from 9 yards out, with 38 seconds remaining in the half for the 14-7 upper hand at intermission.

Pierce finished four-of-seven passing for 64 yards, not to mention he led the Tigers’ defense with 11 tackles from the linebacker position.

VASJ again evened up the score, 14-14, when junior Filippo Pavlica recovered one of two Chagrin fumbles and returned it 18 yards with 8:39 to go in the third quarter.

Chagrin provided another answer on a 21-yard field goal by 6-foot-4 junior Andrew Kirkpatrick for a 17-14 lead with 47 seconds left in the frame.

Down the stretch, Chagrin evened the turnover battle with Norton’s pick at the Tigers’ own 43-yard line and then Demastus’ interception at the Tigers’ 15-yard line that he returned 33 yards to midfield.

West Geauga caught itself needing to get off the field on fourth down for the possibility of a game-tying drive late in the fourth quarter of a home battle against league foe Geneva on Friday night at Howell Field.

After a defensive struggle that resulted in no points in the first half, both offenses came to life after the break, with Geneva 6-foot-3, 250-pound senior fullback Charlie Taylor going to work with 21 carries for 145 yards, while West Geauga 175-pound senior running back Trae Zimmermann wasn’t to be outdone with 156 yards rushing for the host Wolverines.

Both programs were attempting to stay unbeaten for the 2020 season.

After the quiet first half, Geneva’s Taylor went off for three touchdowns in the third quarter, including a 10-yard end-zone find on the Eagles’ opening possession.

West G answered on a 25-yard touchdown toss from junior quarterback Danny Stewart to 6-foot-1 junior receiver Torry Stazzone to tie the game, 7-7, with 9:20 left in the frame.

The Wolverines got back in the game when Stewart redialed Stazzone on a 27-yard touchdown toss to trim their deficit, 21-14, with 8:02 remaining in the game.

West Geauga needed a defensive stop for that potential game-tying drive, but Geneva 6-foot-4 senior quarterback Ben Scibona converted a fourth-and-five pass to junior running back Brady Peet for a 17-yard gain down to the Wolverines’ 16-yard line with 3:45 remaining.

A couple plays later, Scibona scored on a 7-yard keeper with 2:26 to play for the eventual 28-14 final in the Eagles’ favor.

The Orange gridders had the odds in their favor at halftime, but things went sour in the third quarter of their season opener against Independence (3-0) on Friday night at the Blue Devils’ Skoczen Stadium.

Orange 190-pound senior running back Greg Beard got the scoring underway with a 21-yard touchdown catch from senior quarterback Zak Basharat for a 7-0 Lion lead with 57 seconds to go in the opening frame.

The Lions lost a fumble in the second quarter, but Orange 6-foot-2 senior Stephen Daly answered with a 28-yard interception to the house for a 13-0 upper hand with 3:19 to go in the half.

The Orange boys, who had a late start to their campaign, were well on their way.

But Independence opened the third quarter with an onside kick that Blue Devil senior Eric Mitrisin recovered, and then Independence 6-foot-1 junior quarterback Michael Tommer completed a 42-yard toss on fourth-and-long to keep the possession alive.

A couple snaps later, Tommer dialed up 6-foot-2 junior receiver Kyle Zygmunt on a 4-yard touchdown to cut the deficit, 13-7, with 9:51 to go in the frame.

On the Blue Devils’ next possession, Tommer redialed Zygmunt on an 18-yard touchdown toss to take the lead, 14-13, with 5:51 left in the third.

Riding that momentum, Independence 6-foot-2, 215-pound senior linebacker Adam Miklovic intercepted an Orange pass, opening the door for a 2-yard touchdown run by 175-pound sophomore back Rory Corrigan for a 21-13 lead with 1:06 to go in the frame.

That score held up throughout the fourth quarter for the Blue Devil victory.