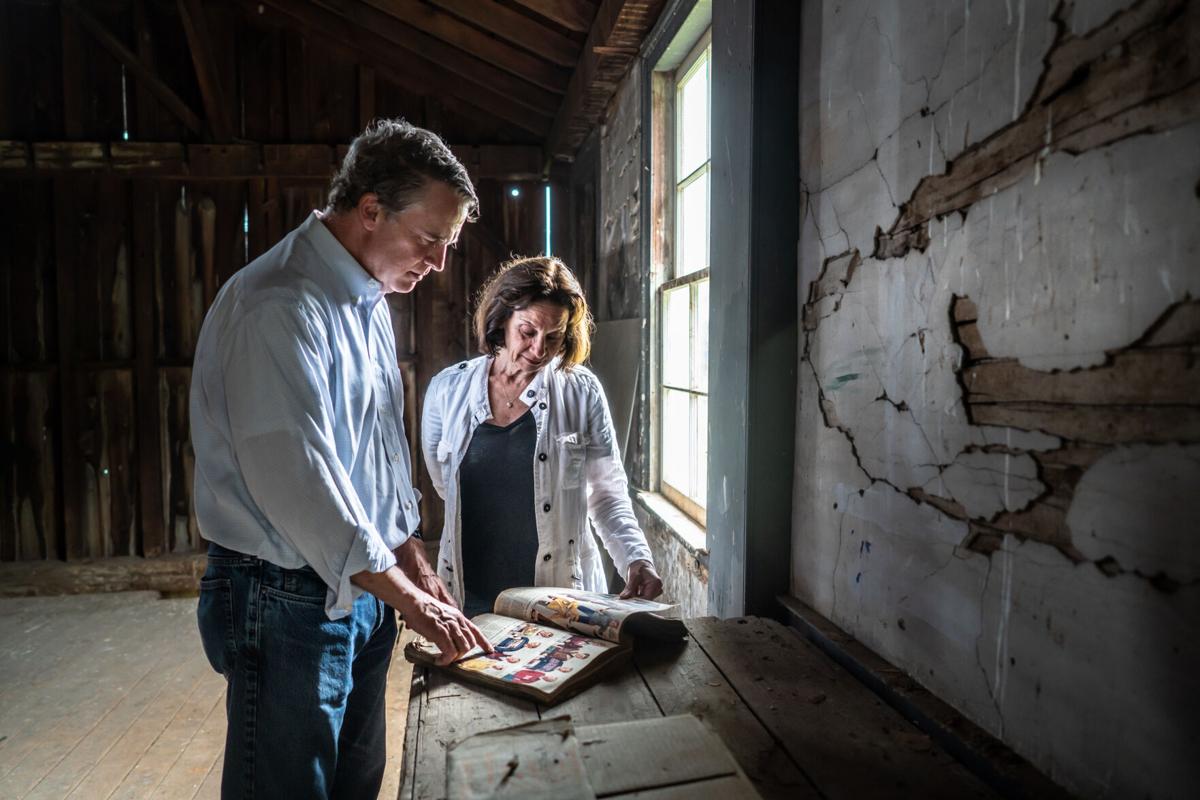 Hunting Valley residents Harry Hawkes, left, and Ellen Resnik are investigating what the future may look like for the gray barns at the corner of South Woodland Road and Chagrin River Road. Through their research and consultations with experts, they suspect that the barn may have been built before 1850 and the building may have housed groomsmen for games at what is now the Cleveland Metroparks Polo Field. They are working with Village Council to determine a future use for the structures before raising funds to restore them. Above, Mr. Hawkes and Ms. Resnik are looking through a 1951 fall and winter Spiegel catalog, which was found inside the building. 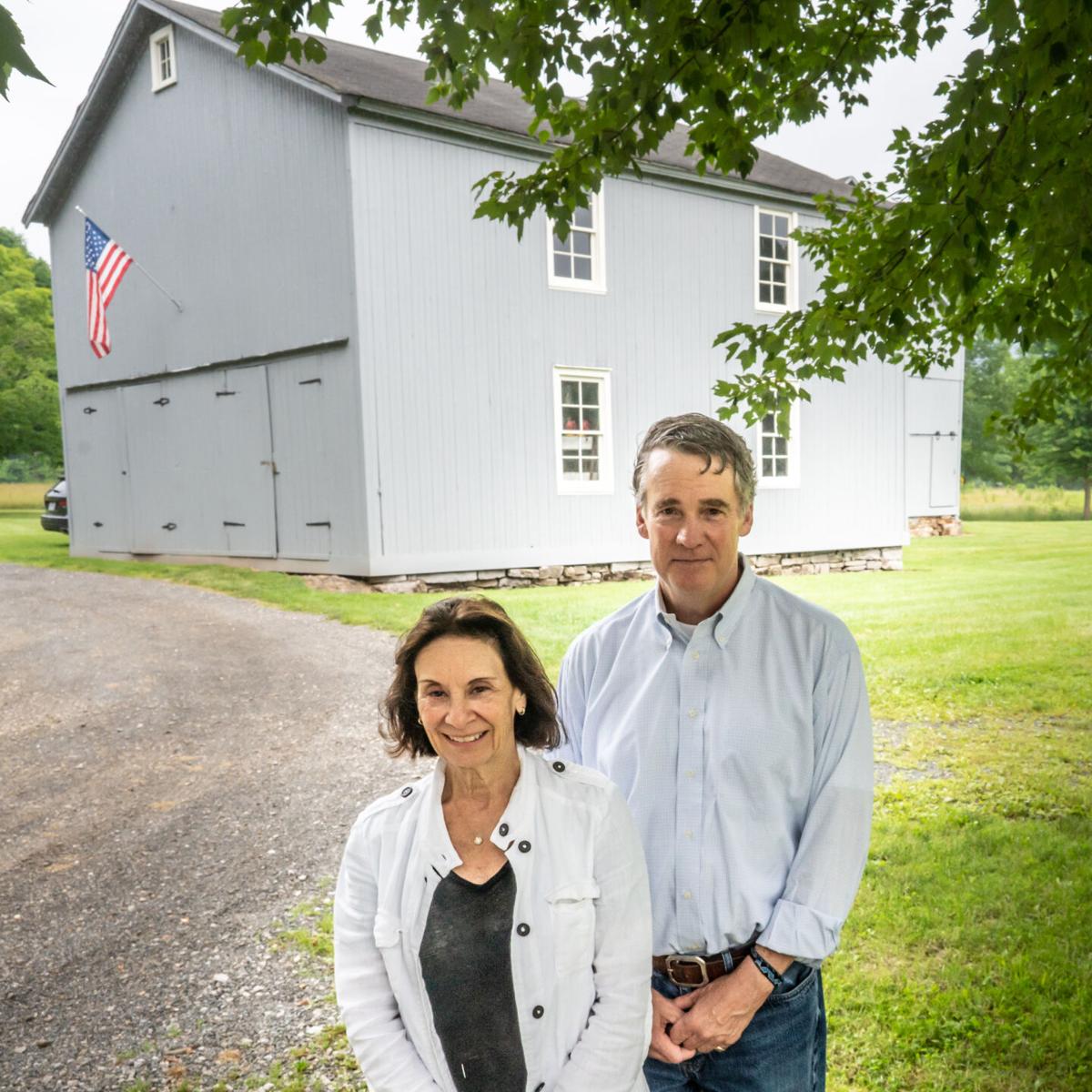 Hunting Valley residents Ellen Resnik, left, and Harry Hawkes are researching the history of the gray barns, an iconic landmark at the corner of South Woodland Road and Chagrin River Road.

Hunting Valley residents Harry Hawkes, left, and Ellen Resnik are investigating what the future may look like for the gray barns at the corner of South Woodland Road and Chagrin River Road. Through their research and consultations with experts, they suspect that the barn may have been built before 1850 and the building may have housed groomsmen for games at what is now the Cleveland Metroparks Polo Field. They are working with Village Council to determine a future use for the structures before raising funds to restore them. Above, Mr. Hawkes and Ms. Resnik are looking through a 1951 fall and winter Spiegel catalog, which was found inside the building.

Hunting Valley residents Ellen Resnik, left, and Harry Hawkes are researching the history of the gray barns, an iconic landmark at the corner of South Woodland Road and Chagrin River Road.

HUNTING VALLEY — Residents are looking into a future use for the historical gray barns at the corner of South Woodland and Chagrin River Road, a scenic entrance into the village and a popular destination for wedding and graduation photos. The barns are used for storage now, but a committee is investigating future uses and the cost of restoration.

Mayor Bruce Mavec asked Harry Hawkes, a resident and clerk of council, to embark on the research process and evaluate uses for the buildings. Other committee members are residents Ellen Resnik and Dan Shapiro. The research process to gather information about the structures is ongoing.

“What the village wants to do with it is still very much to be determined. I know they want to be fiscally responsible because it could take a lot of money to fix up these barns,” Mr. Hawkes said. “It would be great to understand the history of the barns. We want to understand their importance and what their use was so we can bring them back to their original use. I think the buildings can be used. Buildings are living organisms and if you don’t continue to use them, they will eventually fall down from neglect.”

Mr. Hawkes and Ms. Resnik have researched the history of the barns and the land. The land dates back to Serenus and Jane Burnett, who were one of the first six families to farm tract two in Orange Township. They arrived from Trumbull County in 1815 and took out a $250, 6 percent mortgage for 100 acres at the corner of South Woodland and Chagrin River Road, according to records. Their home, which was built in the mid to late 1800s, remains at the southeast corner of the intersection. The Cleveland Metroparks purchased it in 1942 and it was renovated by the Chagrin Valley Trails and Riding Club in 1956.

The land was later owned by farmer and cheese factory owner David Sheldon and his descendants before it was sold to Windsor White of White Motor Company. The White family was a strong supporter of polo, but the use of the barn and building is not clear, Mr. Hawkes said. The Village of Hunting Valley has owned 19.7 acres of land with the barn and the building since 1975, according to county records. Local architect Tony Paskevich inspected the structures. He said groomsmen may have slept upstairs in the building next to the barn.

Ms. Resnik said that land maps show property ownership, but the barn and the other building are not included on the maps, which date back to 1874. Mr. Hawkes said that two barn experts visited the structures. The barn was used to store hay and the other was likely not a barn because it has more doors and windows. It also has lath and plaster, chair rails and an internal stairwell. One of the barn experts said that the beams in the barn are hand hewn, meaning it was likely built before 1850, but could have been moved from a different location.

Just to preserve the buildings, their structural integrity needs to be improved, including replacing the roofs and fixing the foundation. The buildings also need to be cleaned and ongoing light maintenance is required, Mr. Hawkes said. To make the structures functional, they would need more improvements like basic wiring, water connections and a new wood floor for the barn. To make the structures “first class,” they need plumbing, insulation, HVAC, septic systems, drywall and carpentry.

He gave a presentation on the structures to council members on June 15. Right now, the buildings are used for storage, but contain relics of the past. For example, there is a sign inside advertising a polo game when admission was 50-cents. There is a 1951 fall and winter Spiegel catalog, which advertised apparel, accessories and footwear. Inside the building, there is a note written on the side of a door that says “great-granddaughter of Serenus Burnett who built this house.”

Councilman Bill Mulligan said that he supports preservation efforts, but it needs to be privately funded. Mayor Mavec agreed.

“We have to be careful. It needs to be privately funded,” Mayor Mavec said. “It’s not appropriate to have public money in something that is not in the interest of all residents. [The barns] are an iconic part of the landscape in Hunting Valley and there’s a large group of people interested in fixing them up.”

He said that council members have not decided what they would like the structures to be used for. The land currently is zoned U-1 for single family houses. Village officials have thrown out a variety of ideas for a future use, such as a museum for the history of Hunting Valley, a venue for fundraisers and receptions, or an accessory use to the polo field across the street.

When a definite use is determined, Mr. Hawkes said that he would like to work with the Hunting Valley Foundation to raise funds. The foundation is a 501(c)(3) nonprofit that covers occasional expenditures that are not included in the village budget. Councilman Bill O’Neill is the founder and president of the organization. The concept of the foundation came up after Ohio’s estate tax was eliminated in 2013, which was a major source of revenue for Hunting Valley.

Committee members plan to refine their strategy based on feedback from council members and donors. They already received a $5,000 donation through the foundation and made a video of the structures, Mr. Hawkes said.

“What makes a lot of these communities special are these old buildings and the history that is tied to them. We should try to preserve them as much as we can. That’s all that we’re trying to do – preserve history,” Mr. Hawkes said. “There’s a corridor of equestrian activity that starts in Gates Mills at the [Chagrin Valley] Hunt Club. It extends to White North [Stables] and the polo field. That’s what makes this part of the valley unique.”

He said that Hunting Valley is famous for its properties and estates with many outbuildings set in a bucolic landscape, as well as its rich history tied to an outdoor, often equestrian lifestyle.

Anyone who wants to help research the history of the structures or preserve them may call Hunting Valley Village Hall at 440-247-6106.