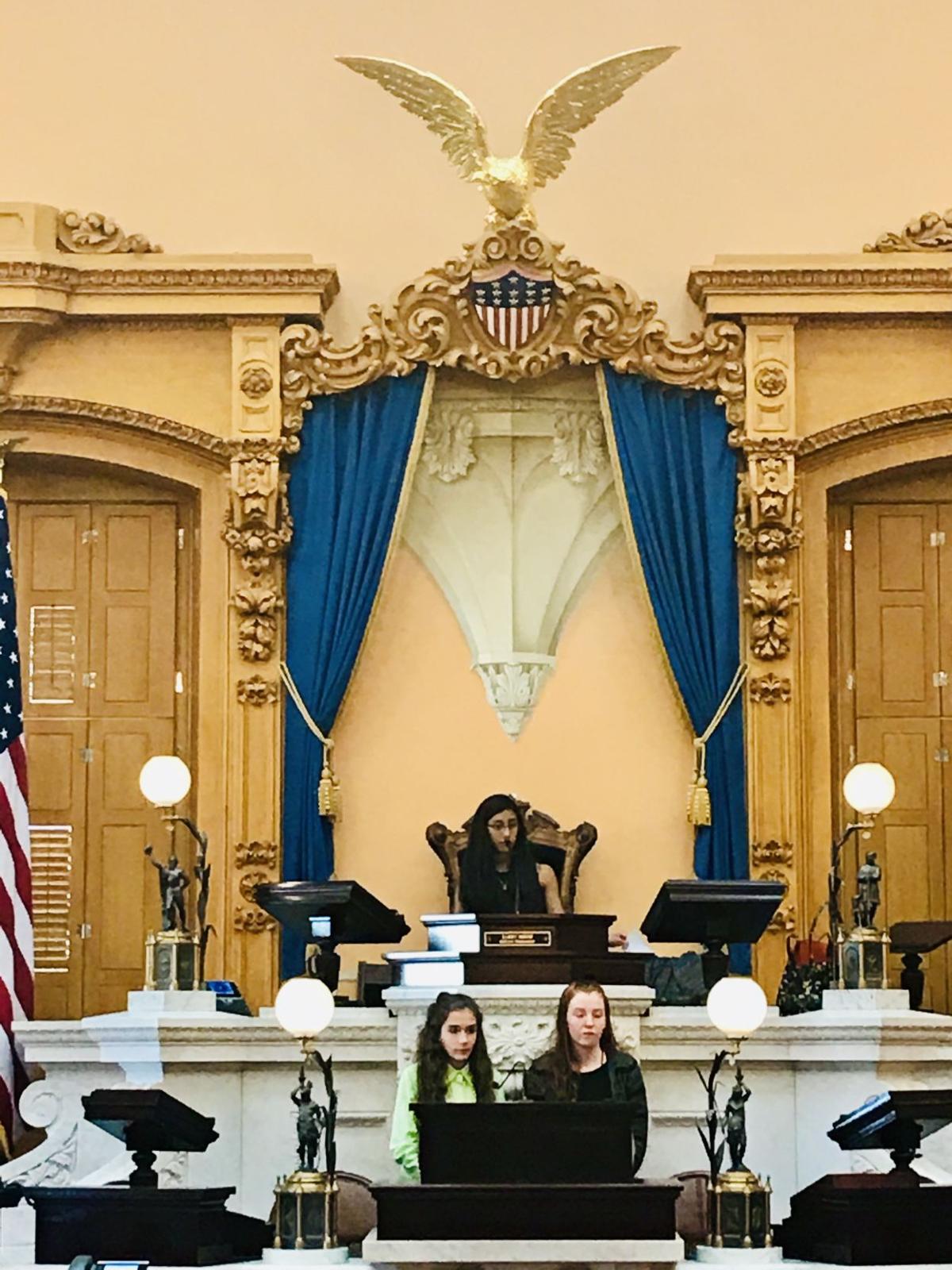 Eighth-grader Anjali Chepyala, 13, of Pepper Pike presides in the chambers with students from other schools at the Ohio statehouse in Columbus as the president of the Senate at the fifth Ohio YMCA Youth and Government Middle School State Assembly. 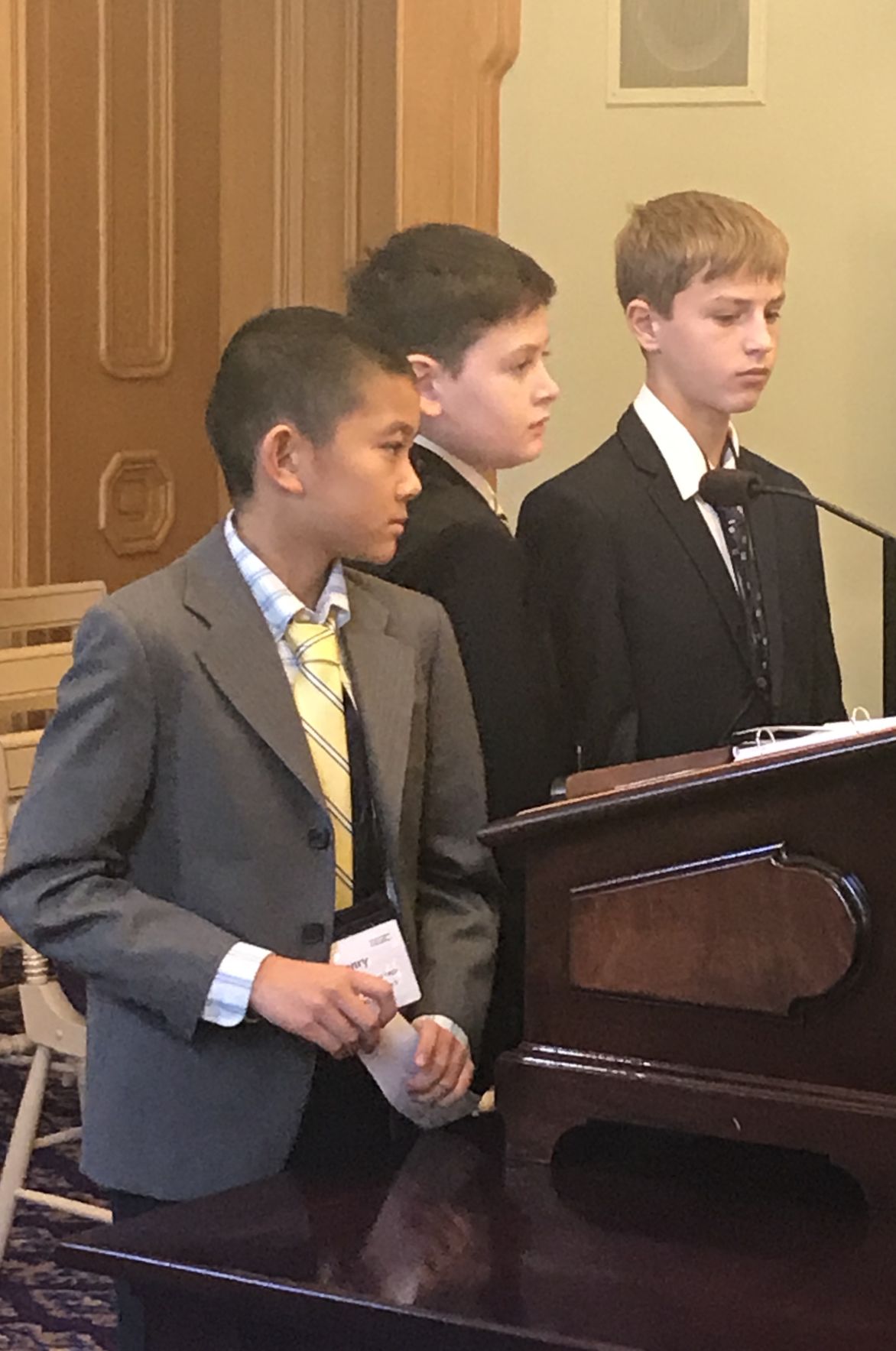 Eighth-grader Anjali Chepyala, 13, of Pepper Pike presides in the chambers with students from other schools at the Ohio statehouse in Columbus as the president of the Senate at the fifth Ohio YMCA Youth and Government Middle School State Assembly.

Among them were about 25 students from Brady Middle School who traveled to the Ohio Statehouse in Columbus for the 5th Ohio YMCA Youth and Government Middle School State Assembly Nov. 24-26.

“It’s really important to know how government works,” said eighth-grader Gabe Feinberg, 14, of Pepper Pike. “It feels good to know that you’re making a difference. We should have our say in government as well as anyone else.”

Gabe and his cohorts from the Orange City School District drafted and passed their own bills along with legislation from more than 300 students representing 23 Ohio schools. Of the 10 bills that Brady students introduced, four were passed in committee and on the House floor and three were signed into law by the student governor.

Gabe, along with eighth-graders Sam Bilsky, 13, of Orange Village and Henry Ringenbach, 14, of Pepper Pike drafted a bill to require public schools to provide a mental health class to all students in grades six through eight, which was signed by the student governor.

Ms. Young explained that the students choose and research the topic for their bills and write a draft proposal. The advisers review their proposals, which must follow the Youth and Government curriculum.

Eighth-grader Camryn Zucker, 13, of Moreland Hills introduced a bill to mandate recycling in all public school districts in the state. Seventh-grader Tyler Heasley, 13, of Moreland Hills drafted a bill to fund reforestation projects in urban areas, which was signed. A bill to stop the advertisement of nicotine products was also signed by the student governor. This bill was drafted by seventh-graders Luke Schmotzer, Henry Wang, Zach Frederick and Brandon Wang, all age 12 of Pepper Pike.

Ms. Bing said that the club members head down to Columbus on Sunday and spend all day Monday at the statehouse passing bills. That evening, there is a social hour at the Renaissance Columbus Downtown Hotel, where the students meet their competitors from other schools and those who are running for an elected seat the following year may give a speech. On Tuesday morning, the students have a wrap-up discussion before heading home. For the 2020 assembly, seventh-grader Henry Wang, 12, of Pepper Pike was elected president of the senate.

The advisers of this club spoke highly of their students’ success at this year’s assembly.

“These students are amazing at this. They put in so much work ahead of time,” Ms. Young said. “They ask questions about other students’ bills and they’re really engaged. It’s cool to see it come alive.”

Ms. Drenik-Jones said that the students have to act like they are members of the legislature, such as dressing professionally and following the proper rules.

“The whole venue of being in the statehouse is electrifying,” she said, “to see the students sitting in the senate, voting and following Robert’s Rules of Order.”

Gabe said that his experience with Youth and Government has improved his leadership and public speaking skills. He has also learned about how government works in the real world. Camryn said that this assembly is a wonderful opportunity to experience how the legislature works at a young age.