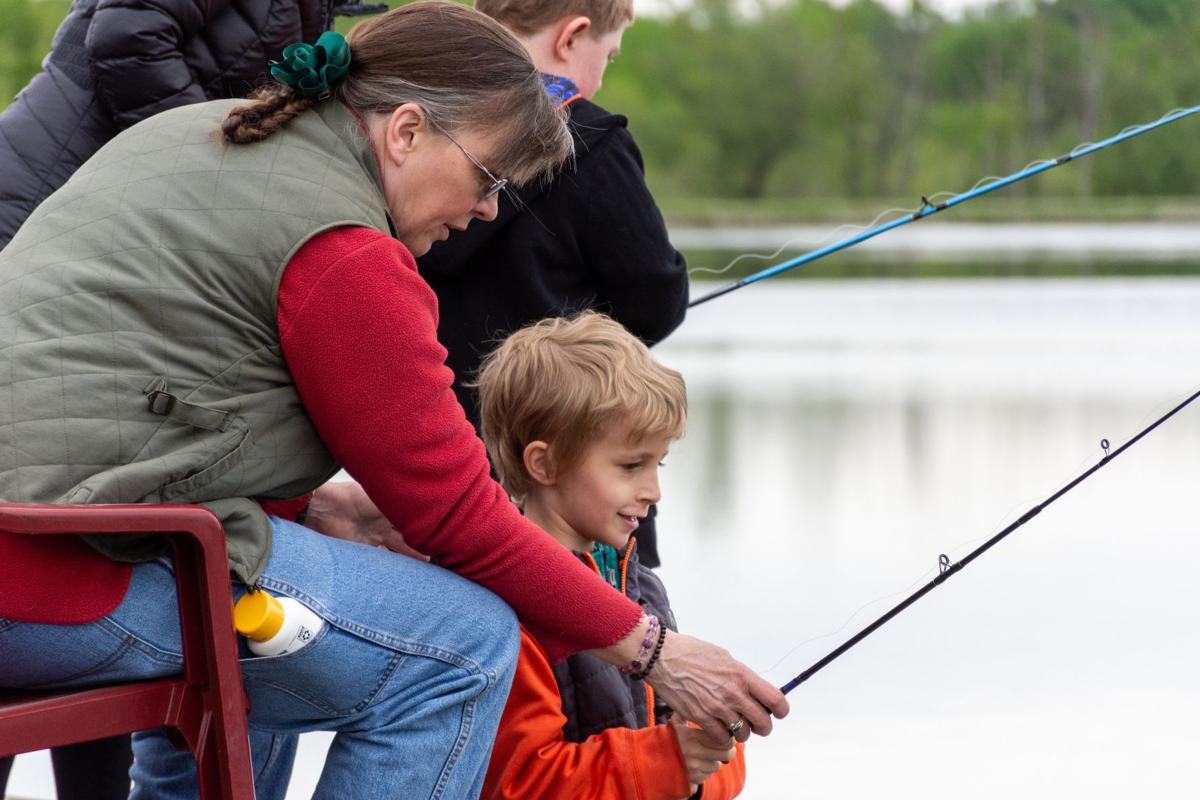 The fish were biting at the Walter C. Best Wildlife Preserve in Munson last week for the eighth annual Fishing Event for Special Needs Children. Lynn Holmes, 56, of Huntsburg helps Joe Santangelow, 7, of Chardon during the event that brought about 90 children from the Geauga County school districts to the park. 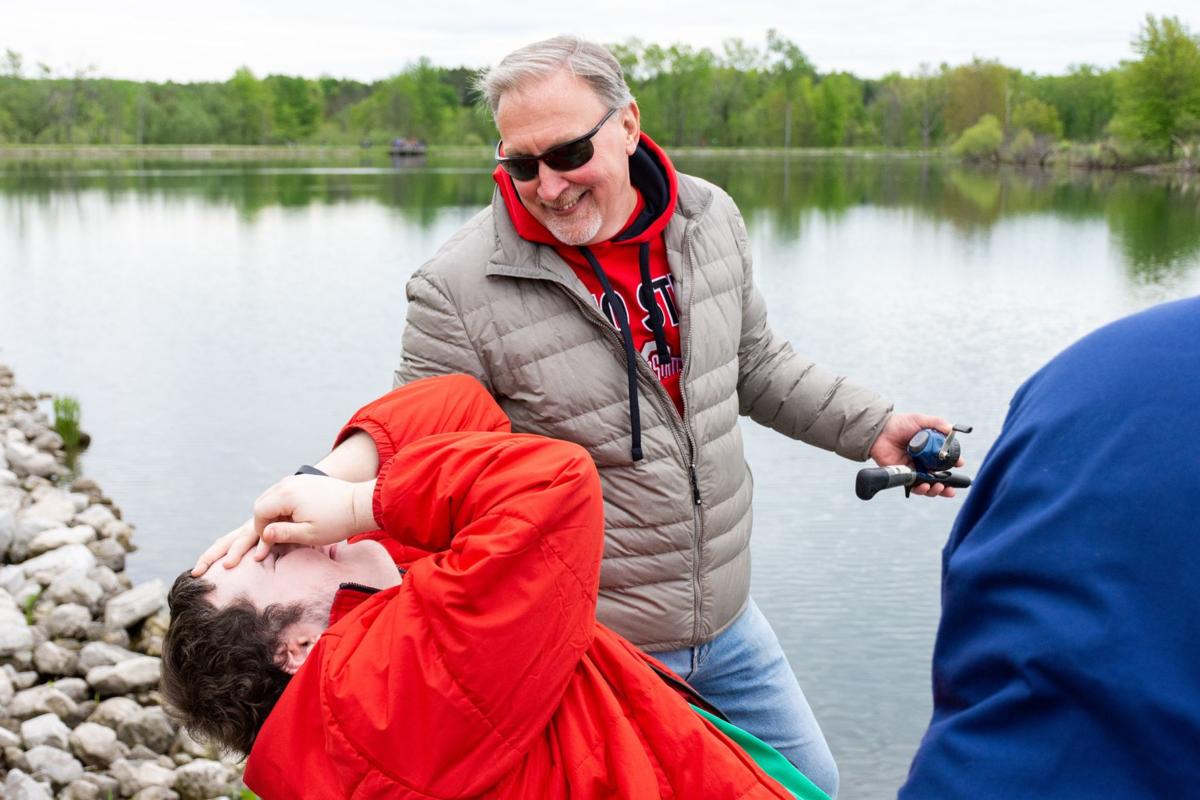 Joe Bolton, 58, of Chardon enjoys a light moment while casting lines with a Chardon student at the event sponsored by local Rotary Clubs, The Chip Henry Institute for Outdoor Adventure, Geauga Park District and the Geauga County Educational Service Center.

The fish were biting at the Walter C. Best Wildlife Preserve in Munson last week for the eighth annual Fishing Event for Special Needs Children. Lynn Holmes, 56, of Huntsburg helps Joe Santangelow, 7, of Chardon during the event that brought about 90 children from the Geauga County school districts to the park.

Joe Bolton, 58, of Chardon enjoys a light moment while casting lines with a Chardon student at the event sponsored by local Rotary Clubs, The Chip Henry Institute for Outdoor Adventure, Geauga Park District and the Geauga County Educational Service Center.

Catching fish at the Walter C. Best Wildlife Preserve last week captivated and fascinated kids who were participating in the annual Fishing Event for Special Needs Children. With the help of many volunteers the children with special needs baited their hooks, cast their lines and reeled in the fish.

Geauga County Commissioner Jim Dvorak, also a coordinator, noted that the event at the Geauga Park District Park in Munson is in its eighth year. “Kids are brought from all the schools in Geauga County from junior high and up,” Mr. Dvorak said.

This year worked out well, he said. “The fish were biting more than ever.” Three bass were caught over 10-inches long, he noted. “The kids were excited, catching fish and reeling them in.” Some have never fished before.

Rotary volunteers help along with friends and family members. “It’s a service project for the clubs and it’s cheap to pay for that much enjoyment,” Mr. Dvorak said. He is a member of the Burton-Middlefield Rotary.

For many children it is the first time they have fished. A month before the event, teachers explain how to work the fishing rods and reels so the children are ready to fish, he said. And even the school bus drivers help with baiting the hooks at the event, Mr. Dvorak said.

“We create a utopia for the kids and they are thrilled,” he said of the morning of fishing. “The Geauga Park District is gracious to close the park to the public during the fishing event.”

Mr. Dvorak was instrumental in founding the program. He noted he volunteered at a deer hunting event for 25 to 30 children with special needs and their parents..

He approached Geauga Park District’s former director Tom Curtin with the idea to sponsor a program for children with special needs and also asked the support of four Rotary Clubs. He also works with the Geauga County Board of Education, which has to approve the event, he said.

Each Rotary Club donated $150 to give kids a normal day of fishing. The classes are all together. “They like being in the great outdoors,” Mr. Dvorak said.

The Chardon Fire Department brought its trucks in as well as a number of ATV vehicles to give some of the children rides around the lake. The Geauga County Sheriff’s office also had staff at the event. Though it’s spring, the fishing activities were topped off with Santa Claus (aka Bill Dieterle) from Santa’s Hideaway Hollow, who visits and passes out gift certificates for ice cream.

“We have a lot of help,” Mr. Dvorak said, noting they have help from O’Reilly Equipment.

Linda Henry, wife of the late Geauga County Juvenile and Probate Court Judge Charles “Chip” Henry has participated with her family including her son Adam for many years in the event. She takes photographs from a golf cart and passes out water to participants.

“It’s been an honor to share in the annual fishing event with the area Rotary Clubs,” Mrs. Henry said. “Chip was all about making sure kids had opportunities for outdoor experiences like fishing. He felt it was an important part of his life growing up. Helping kids with special needs have this day out fishing is a perfect way to remember him,” she said.

In addition to her son, other members of the Henry family including Don Henry were on hand to volunteer, as well as Mike Henry and Rick Henry. Scott Henry has been a coordinator of the event.

Judge Henry believed adventure in nature was critical to healthy development. “Chip would have loved this event,” Mrs. Henry said of the outing. “He loved fishing. It was relaxing, outside and it was doing something he enjoyed.” He wanted kids to have outdoor experiences, she said.

“It would have been wonderful for him to do with special needs children,” she said. “He would have appreciated that these kids are getting this opportunity. And the kids had a blast.”