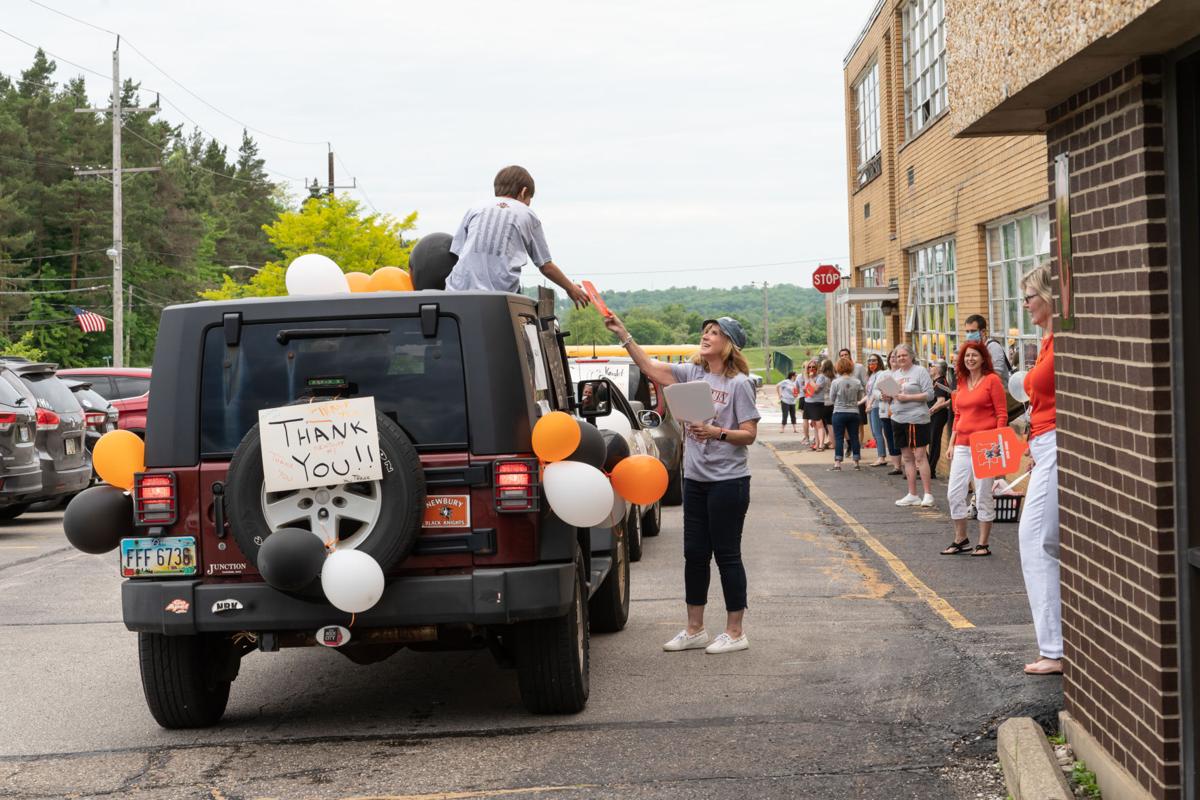 Superintendent Jacqueline Hoynes of Newbury Local Schools, right, hands a Newbury Black Knight paddle to a student during the district’s Last Day Parade in the high school parking lot. The district held this drive-by event on June 4 to provide closure for all staff and students for when the district closes after June 30. Students received the paddle at the start of the parade and a goodie bag with sunglasses, cookies and gift certificates. 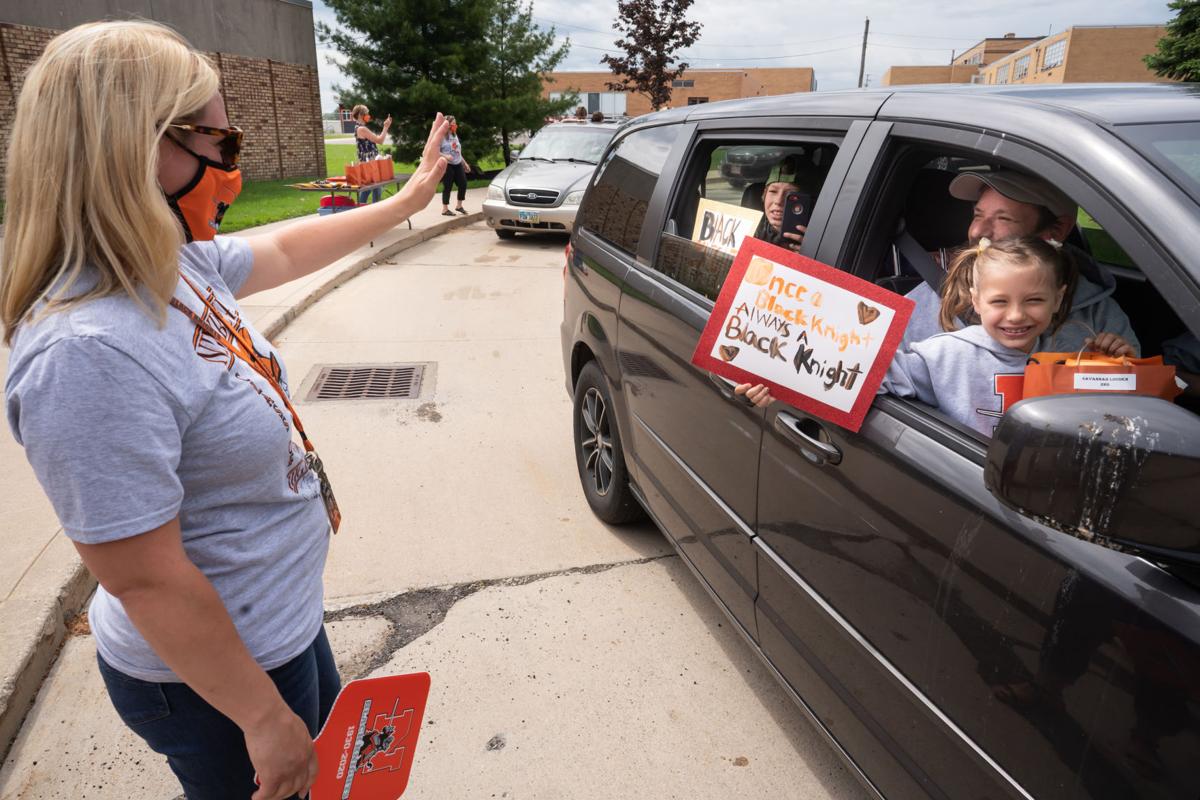 Newbury administrators gives their farewells to students before handing them goodie bags during the Newbury Local School District’s Last Day Parade on June 4. The district held the drive-by event to provide closure for all staff and students for when the district closes after June 30. 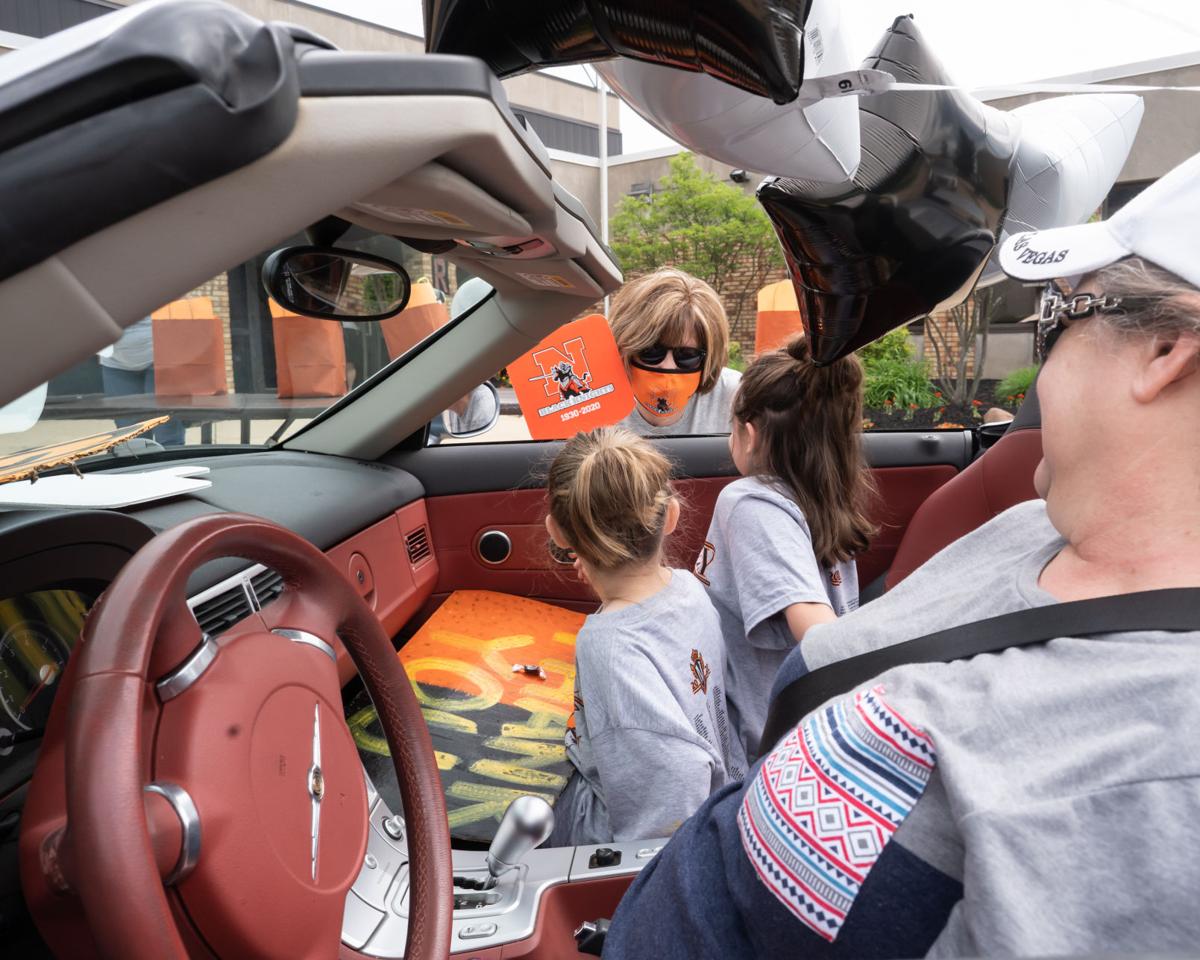 Superintendent Jacqueline Hoynes of Newbury Local Schools, right, hands a Newbury Black Knight paddle to a student during the district’s Last Day Parade in the high school parking lot. The district held this drive-by event on June 4 to provide closure for all staff and students for when the district closes after June 30. Students received the paddle at the start of the parade and a goodie bag with sunglasses, cookies and gift certificates.

Newbury administrators gives their farewells to students before handing them goodie bags during the Newbury Local School District’s Last Day Parade on June 4. The district held the drive-by event to provide closure for all staff and students for when the district closes after June 30.

NEWBURY — Cars lined up along Auburn Road as dark clouds rolled in from the distance, but there was no rain on this parade as students and parents waved one last goodbye to their Newbury Local School District campus last week.

Alumni, administrators, staff, students and parents gathered together the morning of June 4 for the Newbury Local Schools Last Day Parade, which was held in the form of a socially distanced drive-by through the school parking lot due to coronavirus pandemic health restrictions still in place.

Teachers, staff and administrators waved paddles with the Newbury Black Knight logo and donned facemasks to match as students and parents drove their cars, decorated with balloons, window paint and poster boards, through and honked their horns to the rhythm of the district’s fight song, courtesy of members of the Newbury Black Knights Marching Band.

“It’s hard because you want to celebrate them, but you want to cry at the same time, so it’s a mixture of happiness and sadness,” she said.

School buildings have been closed statewide since mid-March due to the coronavirus.

Newbury will become part of the West Geauga Local School District on July 1 through a territory transfer. Both the Newbury and West G schools boards are discussing the fate of the Newbury campus.

Ms. Csontos said while she wished could give all her students hugs, “I’m happy we at least have this.”

Ms. Csontos has taught with Newbury schools for five years and she currently has a one-year contract with West Geauga schools, she said, and will be teaching in the new district next school year. She said she’s happy she has the chance to help her students transition for at least that one year. “And then what the future holds is what the future holds.”

Principal Michael Chaffee for grades five through 12 said the event was “heartbreaking.”

While he was happy to see students and staff come together again, for many, “realizing it’s the last time we’re going to see them is a challenge.

“This is just a uniquely special place,” he added. “We kind of always knew this day was coming, but the fact that it’s here, it’s pretty emotional.”

Mr. Chaffee said Superintendent Jacqueline Hoynes was the “mastermind” behind the parade, but noted that a lot of staff helped put it together, giving a shout-out to the school secretaries, custodians and bus drivers.

“We built such a strong family environment here, it’s kind of like a family reunion almost,” he said.

Dr. Hoynes said the students needed to see each other one last time as Black Knights of Newbury. “I know we needed closure, and I thought a parade was a good idea.”

She said the district also gave a gift to each student and wanted a safe way to help them come through the school for both their final farewell to the district and to receive their gift.

For parting gifts, each student received Newbury sunglasses and a dozen chocolate chip cookies from the district as well as gift certificates from the Black Knight Parent Organization.

“It’s a bittersweet day. All school districts are feeling a loss at the end of the school year [with] not having closure, but I think in particular it’s tough for us since we’re closing,” Dr. Hoynes said.

Rising Sophomore Nora Westover, 15, of Newbury Township played her flute alongside the marching band to help keep up the energy of the event.

“It’s sad, she said of the district’s last days. “I’ve been here my whole life and it’s kind of just over.”

Nora said she’ll be going to Berkshire Local Schools next year, adding that she felt nervous about the change.

While feeling down with the closing of her district, she said she was glad she got the chance to spend time with classmates and teachers. “It feels good that everyone’s here for the last moments,” she said.

Connie Hillyer, a 1974 Newbury High School graduate, said she was grateful for the send-off.

“It was a beautiful community, a great school, I had a wonderful education here,” she said. “It’s the end of an era. I was sorry that it wasn’t able to stay viable, but I understand.

“There’s a lot of heart in this community,” she added. “[I’m] just wishing all the Newbury students have a really good foundation for wherever they go or whatever they do. There’s something to be said for small schools.”

As members of the district looped through the parking lot and were sent on their way, they passed portraits of the final Newbury Class of 2020.

Painted on the building’s windows were the words, “Black Knights forever!” Just below, the school message board flashed a parting message to the district, “Remember your roots, trust your wings, cherish your memories.”