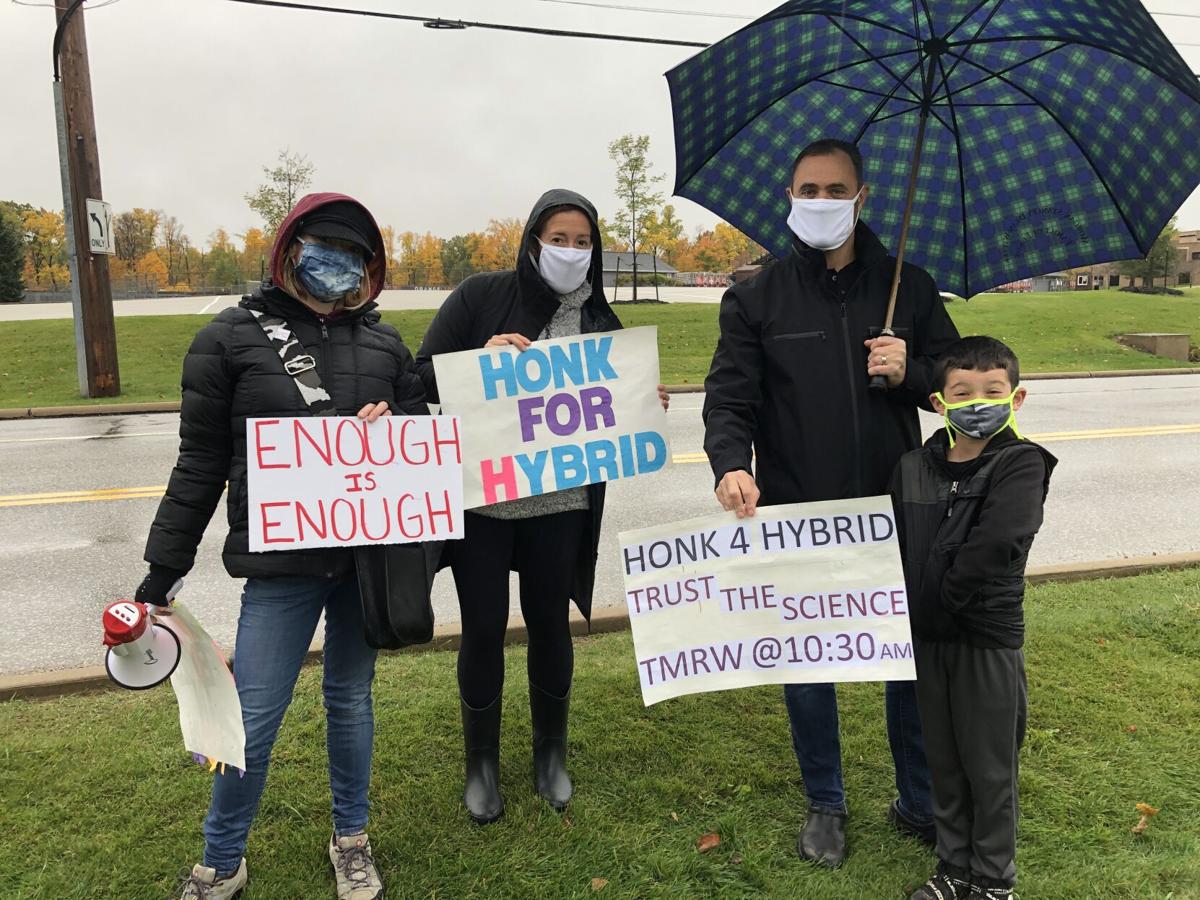 A group of about 15 parents gathers outside the Orange Board of Education office on Chagrin Boulevard on Monday to demand that the hybrid learning model be implemented. Parents brought signs asking the passing cars to “Honk for hybrid.” 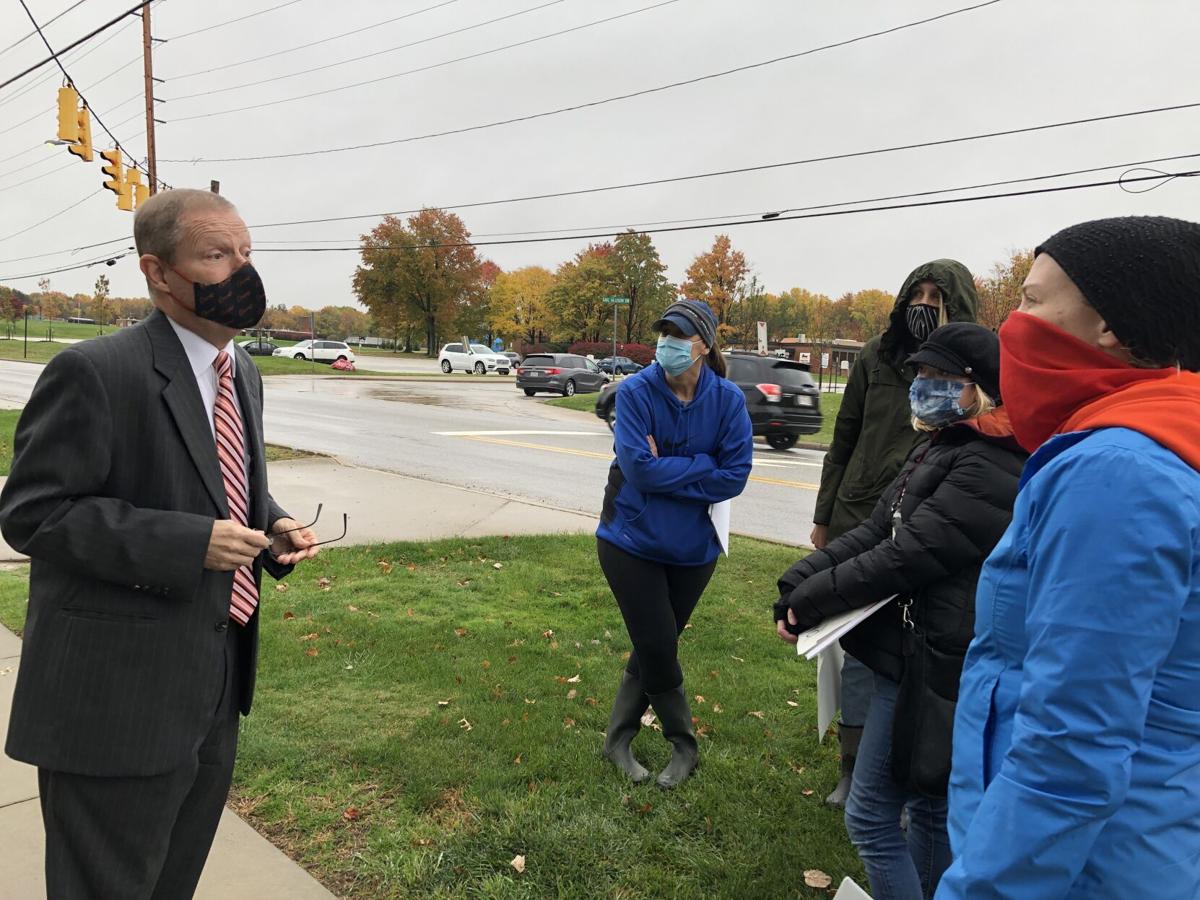 Superintendent Lynn Campbell, left, emerges from the board office to answer the parents’ questions for about 45 minutes. He explained the process to implement the hybrid model and how district officials have to work with the Orange teachers’ union.

A group of about 15 parents gathers outside the Orange Board of Education office on Chagrin Boulevard on Monday to demand that the hybrid learning model be implemented. Parents brought signs asking the passing cars to “Honk for hybrid.”

Superintendent Lynn Campbell, left, emerges from the board office to answer the parents’ questions for about 45 minutes. He explained the process to implement the hybrid model and how district officials have to work with the Orange teachers’ union.

Parents protested outside the Orange City School District Board of Education office Monday morning to demand that the district implement its hybrid learning model. A group of about 15 parents lined Chagrin Boulevard with signs that read “Honk for hybrid” and “Enough is enough” for passers-by to see. Some cars honked their horns in support of the parents. The parents had a megaphone to amplify their message so the administers inside the building heard them.

The district has been fully virtual since classes began this fall due to the COVID-19 pandemic. The school board was planning to reopen the buildings for an optional hybrid model on Monday if Cuyahoga County remained at level two (orange status) of the state’s four-level Public Health Advisory System as of Oct. 15.

But then the number of coronavirus cases in Cuyahoga escalated sending the county into the red zone. Ohio late last week broke records marking three consecutive days of more than 2,000 new cases, prompting Gov. Mike DeWine to fly into Cleveland for a press conference urging residents to take precautions.

Orange Superintendent Lynn Campbell announced the district would remain in the fully remote model for this week. He said he received 41 emails right off the bat when parents were notified of this decision.

“We believe that Orange has a good hybrid plan,” protest organizer Erin Oakley of Orange Village said. “We want it implemented. Our students need to be in person.” Ms. Oakley said that she has two children in elementary school who are struggling with learning fundamental concepts through the virtual classes.

Dr. Campbell came outside to speak to the parents, but at some points they consistently interrupted and talked over the superintendent while he was trying to answer their questions. He said that the district’s plan has not changed since July. If Cuyahoga County was red on the public health advisory system, classes would take place remotely, he said.

He clarified that there is not a definite plan in place yet for the rest of the semester. Dr. Campbell said that he was OK with the children returning for the hybrid model, but the district must take steps to get to the hybrid plan, including a memorandum of understanding with the teachers’ union.

“Tell the truth, tell the truth please,” a parent said as Dr. Campbell explained the process of working with the teachers’ union.

“What the heck do you think I’m doing?” the superintendent said.

Dr. Campbell explained that when the working conditions change, the district has to sit down with the union and adjust their contract, which he called a memorandum of understanding. Members of the teachers’ union approved the contract with the belief that school would be remote if the county is at the red level. A parent told Dr. Campbell that it is the district’s responsibility to negotiate with the union.

Kery Hutner of Orange Village said that his 8-year-old son, Landen, used to attend Moreland Hills Elementary School. This fall, Mr. Hutner pulled his son from the district due to the virtual learning and enrolled him at University School in Shaker Heights, which offered an in-person option. Mr. Hutner said he would like to enroll his son at Orange again when he can attend in person.

Ethan Shuller, 8, of Pepper Pike came to the protest with his mother, Erin. He attends Moreland Hills Elementary School virtually and said that so far it is going “OK.” He said that he would prefer to be in the actual classroom. Ms. Shuller said that there have been technology issues.

“[Orange has] a really safe plan and we want to be in person,” she said. “The other local districts are in person and our plan is the safest. It’s especially hard on elementary kids; it’s taking a toll on their mental health.”

During the frenzied conversation with Dr. Campbell at Monday’s protest, some parents said that the board of education members are problematic. Parents should make the decision about whether their children are learning in a physical classroom or a virtual classroom, some protesters said.

Parents said that a child’s health is more than just avoiding coronavirus, noting their struggles with social isolation and stress.

Dr. Campbell spoke with the parents for about 45 minutes before returning to the board office.