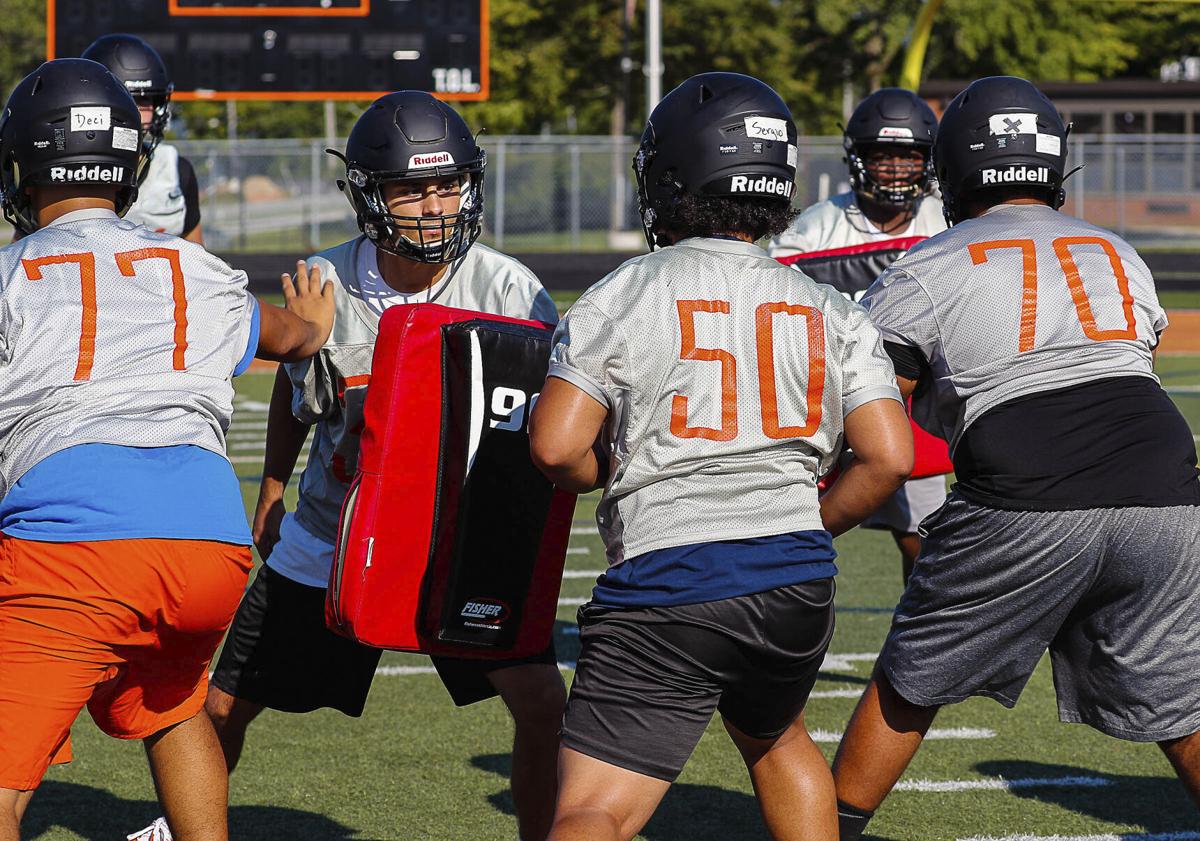 The Orange gridders get back to practice in the third week of August after a three-week delay on getting started. Returning from a 3-7 campaign under 12th-year head coach Adam Bechlem, they’re set to open their 2020 campaign on the road against Independence at 7 p.m. Friday at Skoczen Stadium. 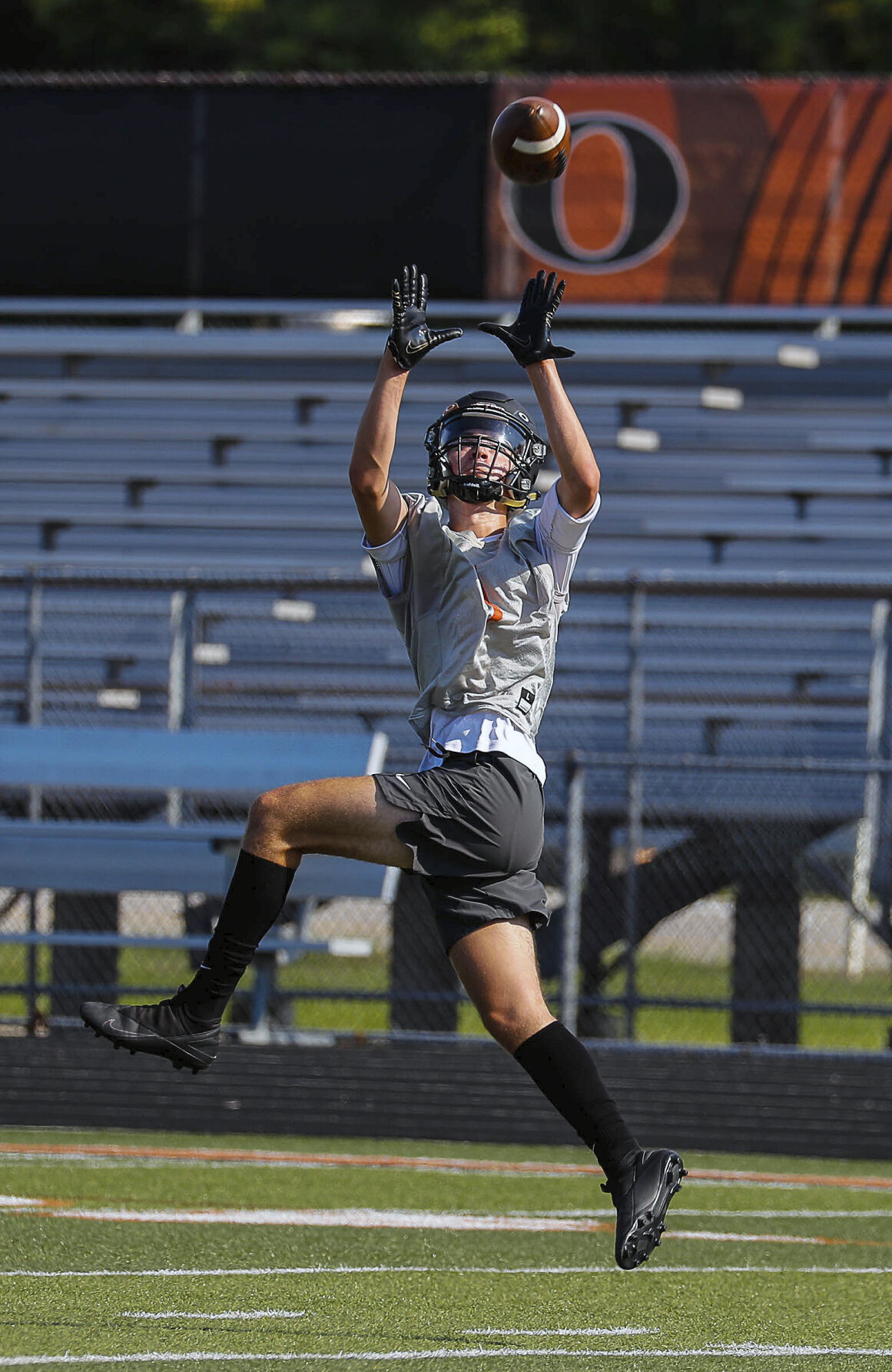 The wide receiver positions were wide open at Orange this preseason, with seniors Tyler Hoffman, Devin Culliver and Stephen Daly leading the way for starting spots. 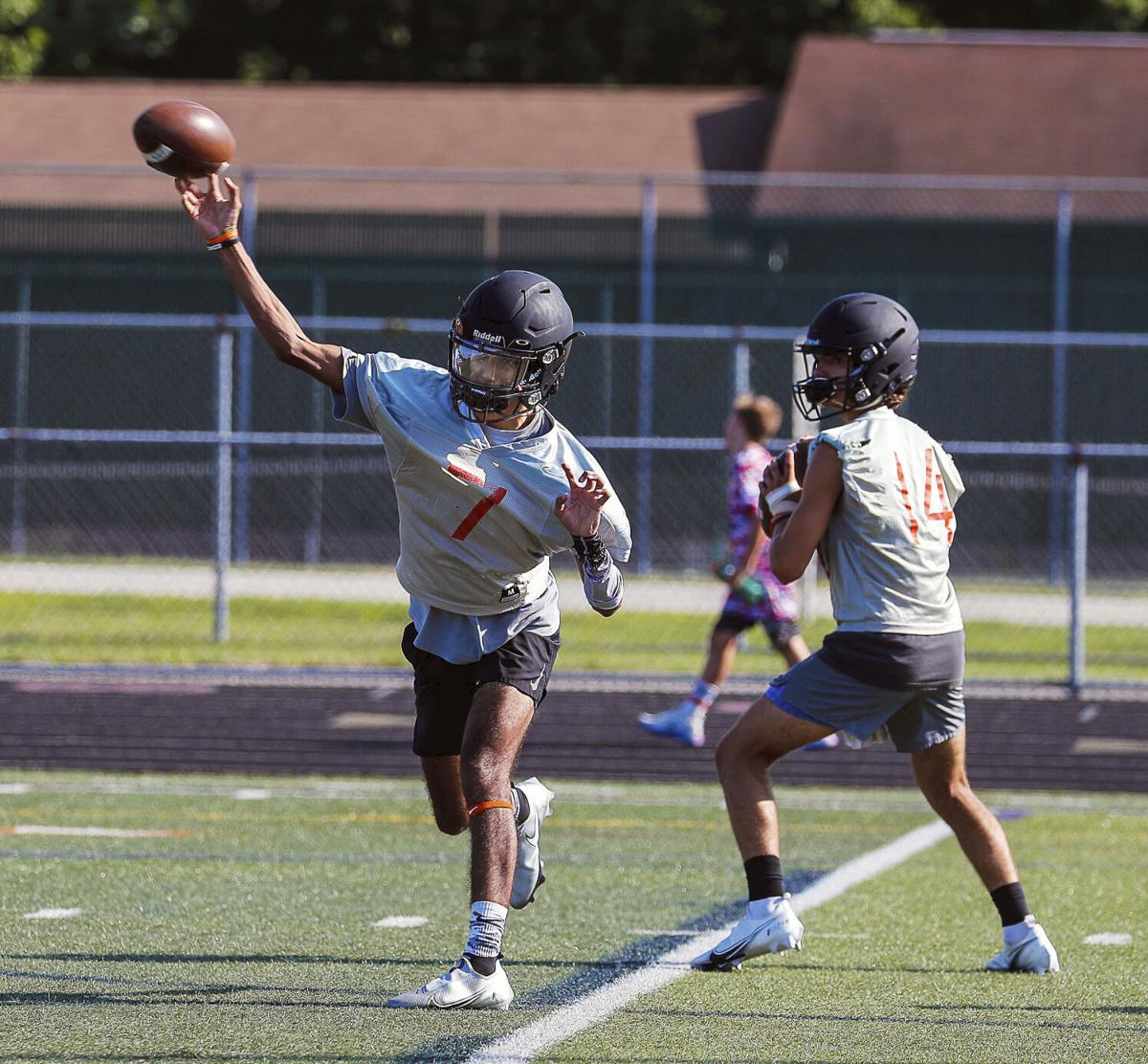 Orange 5-foot-11 senior quarterback Zak Basharat warms up his cannon for the 2020 campaign, after completing 50 passes for 889 yards with 10 touchdowns last season.

The Orange gridders get back to practice in the third week of August after a three-week delay on getting started. Returning from a 3-7 campaign under 12th-year head coach Adam Bechlem, they’re set to open their 2020 campaign on the road against Independence at 7 p.m. Friday at Skoczen Stadium.

The wide receiver positions were wide open at Orange this preseason, with seniors Tyler Hoffman, Devin Culliver and Stephen Daly leading the way for starting spots.

Orange 5-foot-11 senior quarterback Zak Basharat warms up his cannon for the 2020 campaign, after completing 50 passes for 889 yards with 10 touchdowns last season.

The Orange gridders will be joining the party late, but they haven’t been walking around with an umbrella waiting for it to rain in the meantime.

After the Cuyahoga County Board of Health recommended July 30 for remote-only education and the cessation of scholastic athletics this fall, the Lions put their program on pause before returning to the practice field on Aug. 17.

In the four weeks since, the Orange football team has focused on four core values in preparation for its 2020 season opener against fellow Cuyahoga County foe Independence (2-0) at 7 p.m. Friday – a road affair at the Division VII Blue Devils’ Skoczen Stadium.

While it’s week-three football for most of Ohio, the Lions aren’t wasting their time worrying about circumstances beyond their control, Orange 12th-year head coach Adam Bechlem said.

“We’re talking about, every single day, living four core values – and we’re talking about having great attitude, giving great effort, being aggressive and controlling our response to the situation,” said Bechlem, who owns a 55-57 record at the helm.

Orange has a senior-laden squad with 17 of 44 guys on its roster representing that class.

Offensively, the Lions return five veterans from a 2019 attack that averaged 24.5 points per game, including 5-foot-11, 160-pound senior quarterback Zak Basharat, who completed 50-of-101 passes for 889 yards with 10 touchdowns last season.

“The biggest thing I’m seeing out of Zak now is just his control of the offense,” Bechlem said. “He’s a very smart young man. He’s a very good student. I’ve had him in the classroom. He does really well academically.

“So, his ability to process the offense, and to know what it is that we’re trying to accomplish and what everyone needs to be doing every play, and how the offense needs to be run, I mean, that’s what he’s doing.”

But Basharat’s receiving corps is pretty green, with the exception of 6-foot, 185-pound tight end Steven Fellinger, who had two catches for 24 yards with a touchdown as a starter last year.

Lining up wide will be a trio of seniors, including 6-foot-3 Tyler Hoffman, 6-foot Devin Culliver and 6-foot-2 Stephen Daly, while the Lions have some reserve options of guys who will primarily start at the cornerback positions.

In the backfield, Orange graduated featured ball-carrier Diante White, who averaged 7.8 yards a rush for 1,327 yards in 2019. But make no mistake about who will be stepping up to take over the lead role in 2020.

The Lions’ run game will be headlined by 5-foot-9, 190-pound senior Greg Beard, who tallied 37 carries for 271 yards with a touchdown last year.

“(Beard) was never an offensive starter, obviously because he was behind Diante, but Greg’s definitely not a new player,” Bechlem said. “He’s a very experienced player. He was a starter on defense as a sophomore. So, we’re not completely new and raw.”

Meanwhile, 6-foot-1, 220-pound senior Tariq Taylor will get the nod at the other guard position, and 5-foot-10, 190-pound junior JD Popovsky will take over the other tackle spot.

Three of those five guys will play both ways in the trenches, but the Lions have more options on the defensive side of the football, where Orange will be going with an odd-man front for the first time since 2013. But in 2013, the Lions were in a three-four base. This year, they’re going with a five-three base.

“On defense, we have some versatility,” Bechlem said. “We’re doing some different things, so we’re going to hopefully be able to rotate some other guys in, some guys that don’t play on the offensive line. That’s going to help a little bit.

“I’ve already told our team it’s going to be warrior mode. We have so much inexperience that we’re going to have a lot of players that have to really carry the share.”

On the defensive front, Johnson returns at tackle, with 36 tackles and a sack from 2019, while Taylor is at the other tackle spot with eight wrap-ups from a year ago. Flipping from center, Arnold is also slated to start at nose guard.

And at defensive ends, 6-foot-1, 200-pound senior Eric Nickens returns with 10 tackles from 2019, while Fellinger will expand his role as a two-way starter at the other end spot.

In the linebacker corps, Orange will give the nod to 6-foot, 175-pound senior Sam Adler in the middle. At the outside spots, Beard is a third-year starter with 45 tackles, two for loss, a pass breakup, a forced fumble and a fumble recovery from 2019, while 6-foot, 155-pound senior Devin Culliver is getting the nod to start with seven tackles and two pass breakups from 2019.

“Sam Adler has done a great job. He’s been a guy in the program all four years,” Bechlem said. “He hasn’t logged a ton of varsity experience, and now here he is in his senior year, and he’s ready to go.

“If you were at one of our practices, you wouldn’t say to yourself, ‘Wow, this guy is a rookie.’ You know, he looks the part, and he’s doing what he needs to do. So, we’re happy with Sam right now, for sure.”

In the secondary, Orange has three rookie cornerbacks who will rotate between the two starting spots, including 5-foot-9 senior Zach Weisberg, who hasn’t played football since his freshman season, 5-foot-8 senior Jake Askari and 5-foot-9 junior Tony Fatica, a wrestler who’s new to football.

And taking over the starting safety spot is Hoffman, who had seven tackles last season.

Hoffman will also be the Lions’ punter, while senior Katie Hollington, a multi-sport athlete in swimming and track and field, is Orange’s kicker.