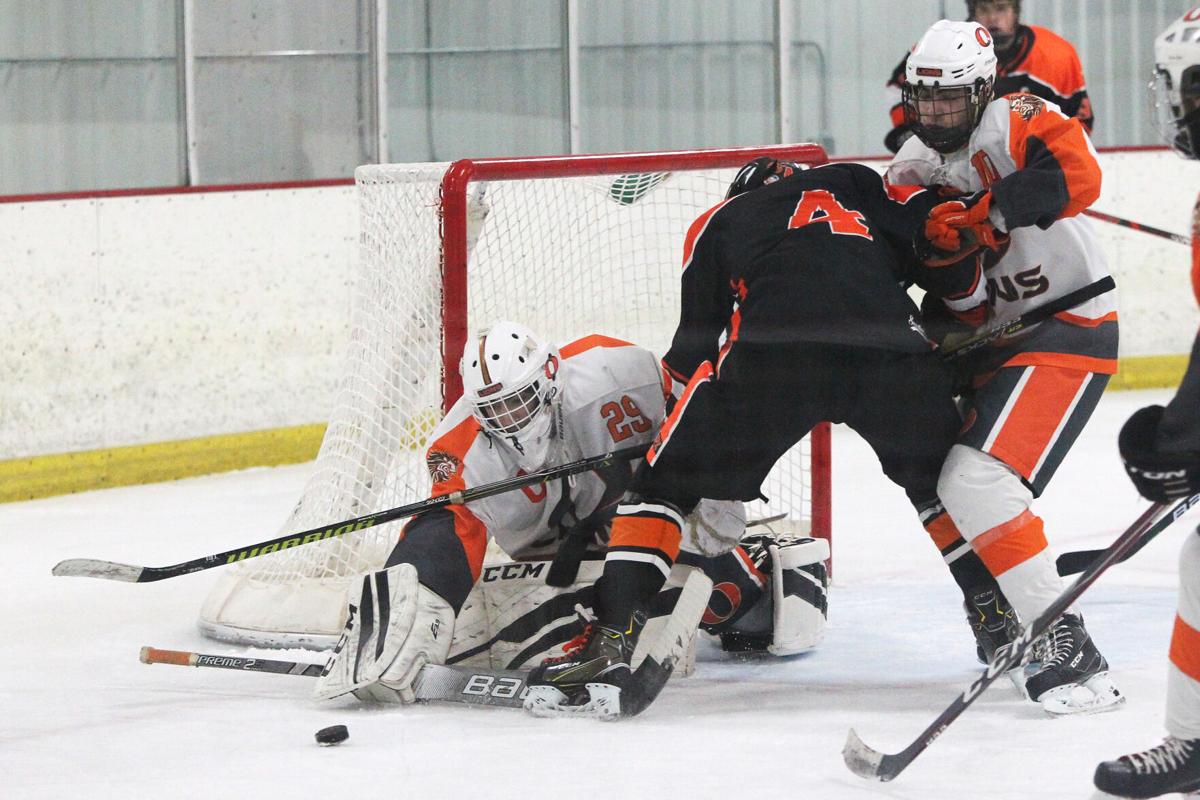 #4 Alex Newton of Chagrin Falls battles #29 Moore (in goal) and #10 Deshpande in the game against Orange at The Pond in Chagrin Falls, Ohio on January 2, 2021. 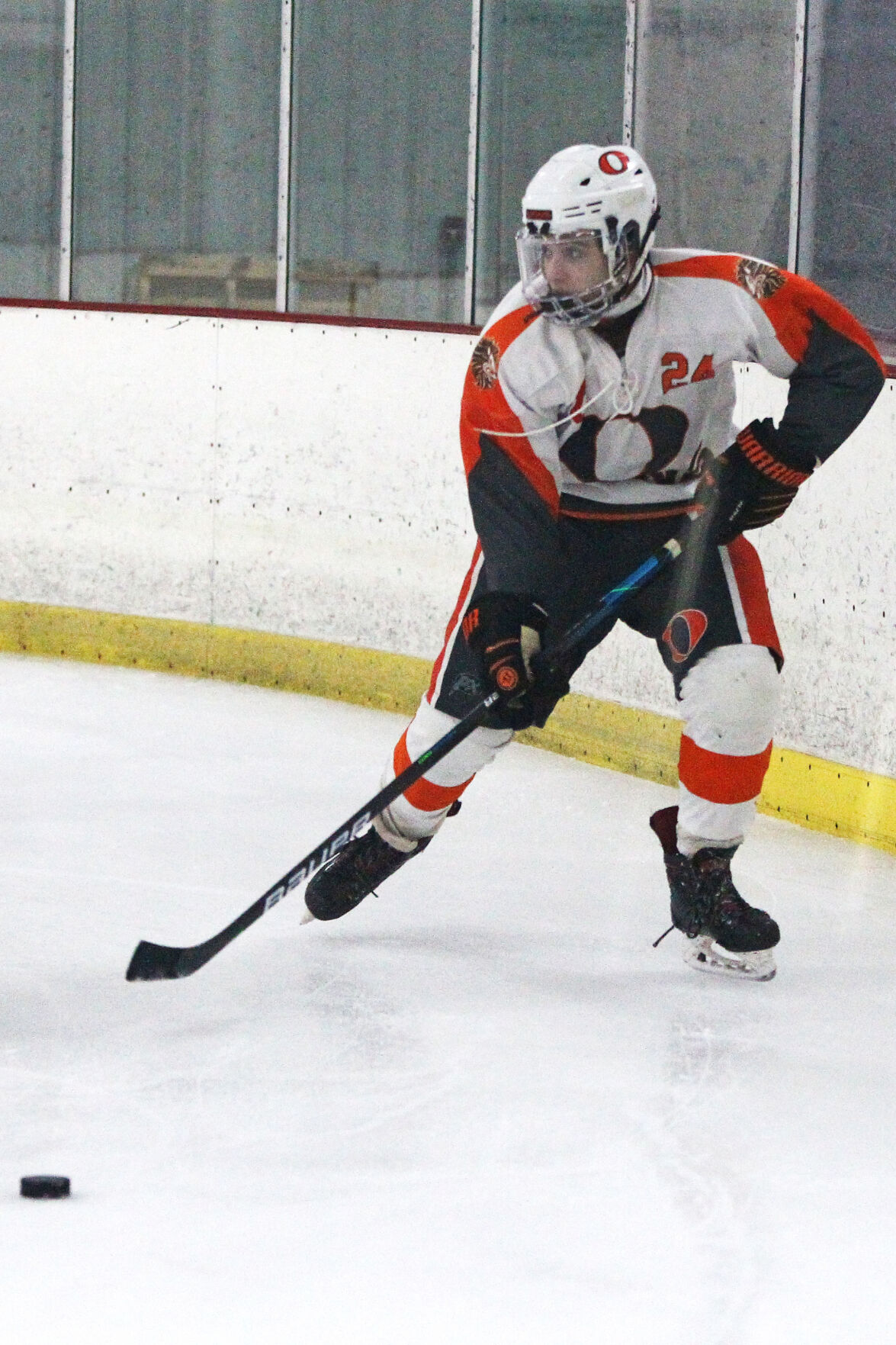 Kornbluth of Orange skates with the puck at The Pond in Chagrin Falls, Ohio on January 2, 2021.

#4 Alex Newton of Chagrin Falls battles #29 Moore (in goal) and #10 Deshpande in the game against Orange at The Pond in Chagrin Falls, Ohio on January 2, 2021.

Kornbluth of Orange skates with the puck at The Pond in Chagrin Falls, Ohio on January 2, 2021.

Due to the coronavirus pandemic, all any high school hockey teams can do is focus on what they can control and appreciate the games that they can play as it can be taken away in the blink of an eye. That’s been something that Orange High School hockey head coach Mike Teplitzky has been preaching to his team during a month-long hiatus. The Lions appreciated the moment on Jan. 2 when forward Jason Kornbluth kept pounding away in front of the net before finally scoring the game-tying goal against Chagrin Falls with just two seconds left in regulation to send the game to overtime. Orange then completed the comeback over the Chagrin Falls Tigers to win by a 3-2 score last Saturday evening.

Orange was trailing 2-1 during the final minutes after Tigers’ senior forward Garrin Bunker cut through the middle and rocketed the puck into the net from the top of the circle at the 5:51 mark. Although the Lions have found success on offense this season off the sticks of Zach McCarron and Kornbluth, the Tigers’ defensemen made life difficult all game long for the Orange pair. Coach Teplitzky made the decision to pull senior goalkeeper Danny Moore late for an extra forward and the decision paid off as Kornbluth broke through with the game-tying lamplighter.

After shocking Chagrin Falls by sending the game into overtime Orange was like a shark that could smell blood in the water. The Lions were relentless in attacking the net in overtime and forward Jackson Fellinger caught a rebound off the right light pad then side-stepped Tigers’ netminder Charlie Gunn for the game-winner.

“Everything always has to go right for that to be able to happen and there’s a lot of craziness with 11 people standing in front of the net instead of ten. Part of it is getting lucky but the other part of it is being able to finish so that was fantastic. When you do that to a team you have a pretty good idea you’ll be able to win in overtime,” Teplitzky said.

The Lions were playing only their second regular season of the season. After an opening game against Aurora the hockey season was put on pause for precautionary measures. Orange’s next opportunity to get back on the ice came in December when the CVCA Christmas Tournament rolled around. The long lay-off didn’t slow the Lions down as it took home the hardware over Normandy. The tournament win was nice but the team was anxious to resume playing its regular season games.

The Lions got on the board when forward Zach McCarron carried the puck through the zone and found space to shoot it into the net with 12:15 left in the first period. The Tigers knotted things up with 11:40 in the second period when senior forward John Ranieri scored on a shot from the slot after receiving a pass from the corner from Tyler Bookman.

Chagrin Falls had a clear plan throughout the game to attack the net. The Tigers had 31 shots on goal compared to just 21 shots on goal for Orange. Despite the greater amount of shots the Tigers had it was almost impossible for them to get anything past Moore. The Lions’ goalie had just qualified for 15th place in OHSAA hockey history for career saves after racking up 156 saves during the tournament.

“He’s really strong. It’s always tough to get it by Danny. He knows us well. We’ve played against him for all four years. He’s one of the best goalies in the league if not the best,” said Tigers’ head coach Jim Rezak.

The Lions have been a team on the rise for quite some time now. The team was recently moved up to the White South division after spending last season in the Blue North division. Orange has been shaping an identity of finding ways to close out victories as its last few games have gone down to the wire. The victory against Chagrin Falls was just another example the team’s clutch gene.