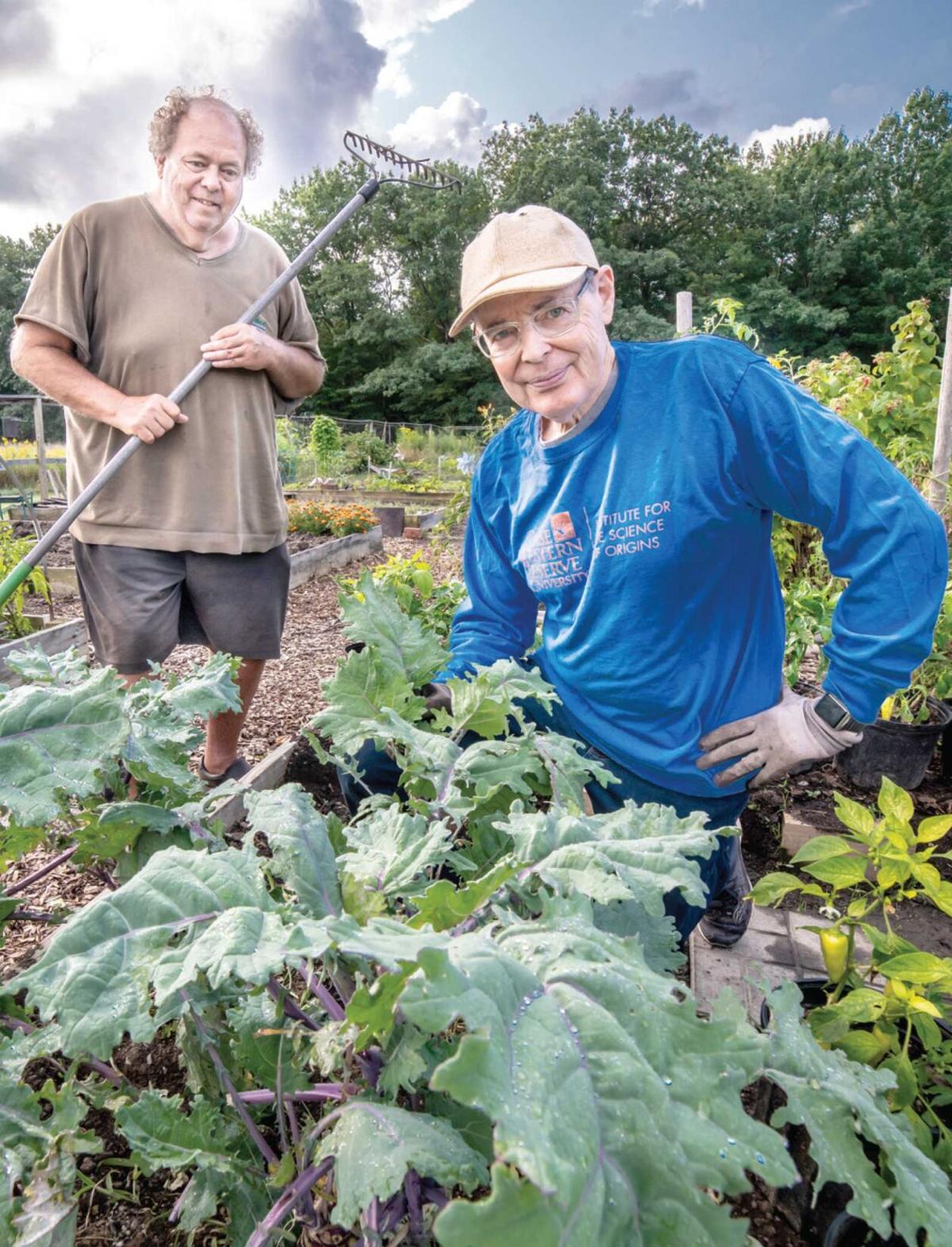 Fred Rosenberg, 77, right, shows off a kale plant in the Orange Village Community Garden near the end of the season. Lee DiGeronimo, 69, looks on with a rake. Both are Orange Village residents and longtime gardeners. They say the garden on Emery Road is a peaceful, friendly place to relax and enjoy the outdoors. 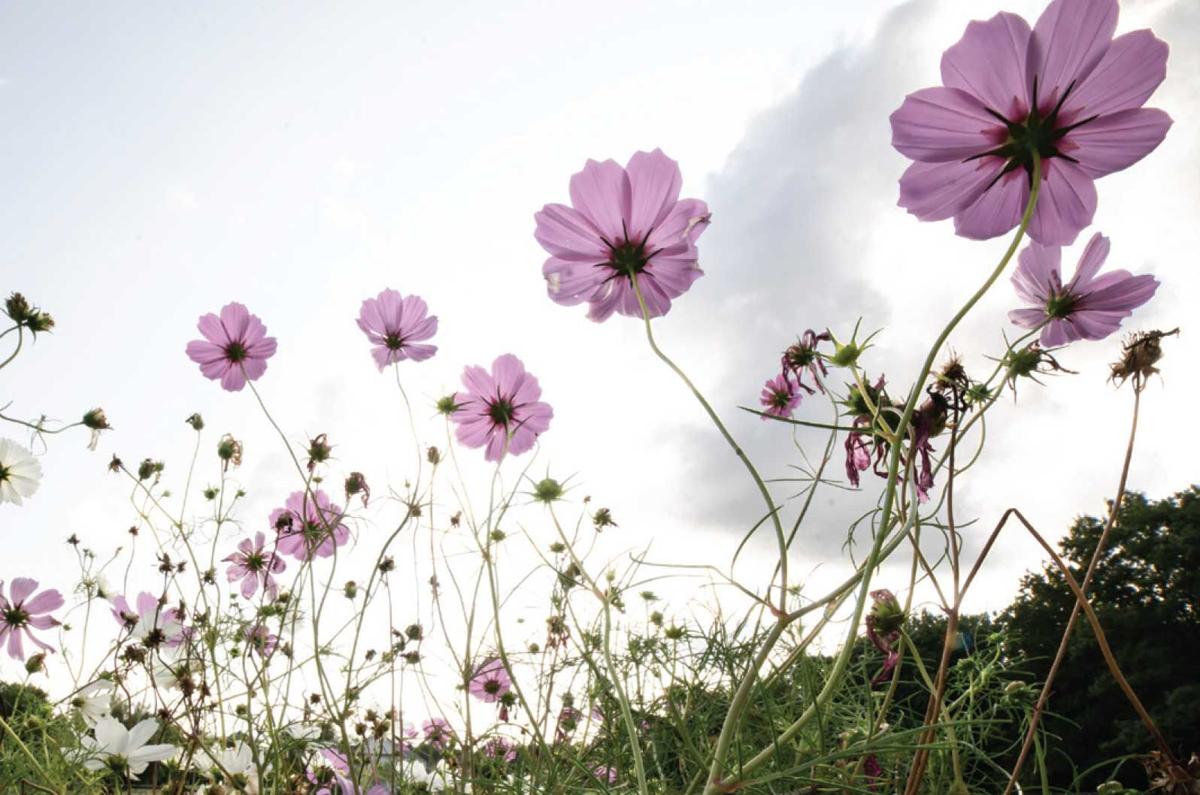 Although there are more vegetables than flowers in the Orange Village Community Garden, the view is still breathtaking to any passerby due to the variety of plants, including vibrant flowers. The lavender cosmos offer a soft, gentle touch to the garden that also includes sunflowers and snapdragons. 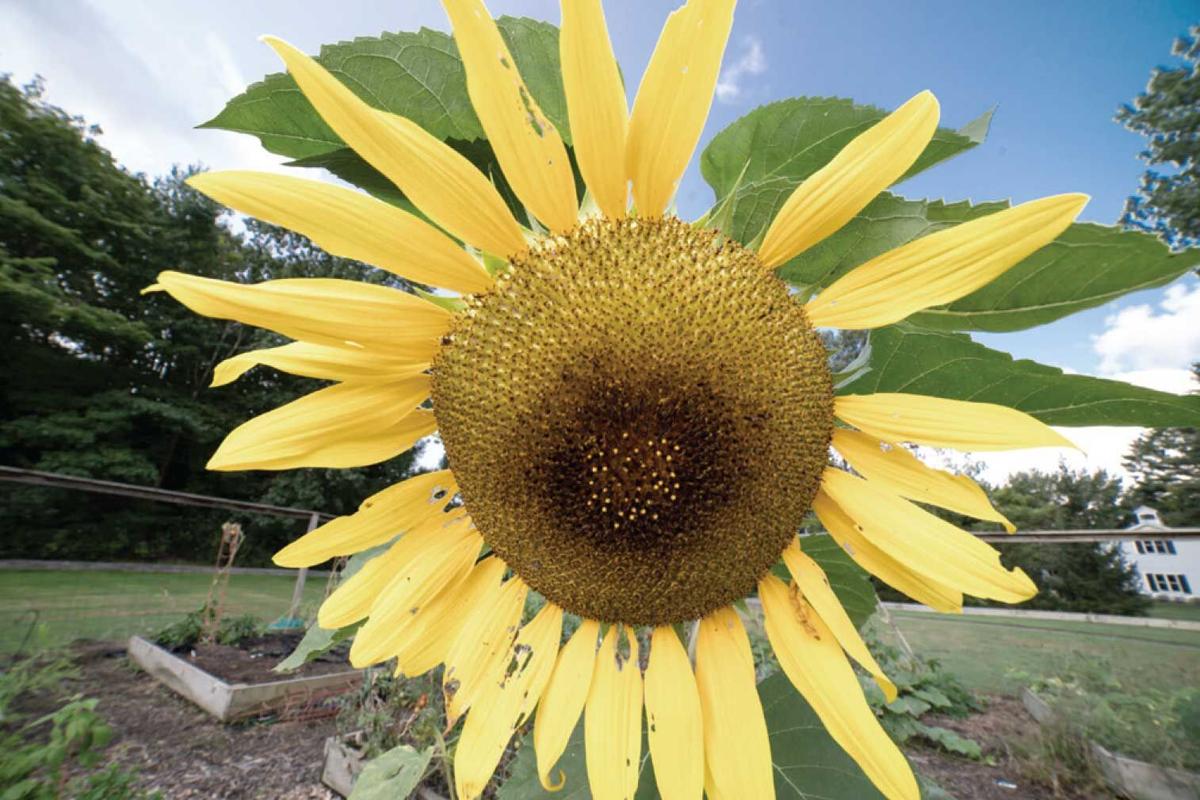 Fred Rosenberg, 77, right, shows off a kale plant in the Orange Village Community Garden near the end of the season. Lee DiGeronimo, 69, looks on with a rake. Both are Orange Village residents and longtime gardeners. They say the garden on Emery Road is a peaceful, friendly place to relax and enjoy the outdoors.

Although there are more vegetables than flowers in the Orange Village Community Garden, the view is still breathtaking to any passerby due to the variety of plants, including vibrant flowers. The lavender cosmos offer a soft, gentle touch to the garden that also includes sunflowers and snapdragons.

He is among the residents taking advantage of the Orange Village Community Garden, a relaxing gathering place for local gardeners and a safe escape spot during the COVID-19 pandemic over the past two summers.

Fred Rosenberg, 77, of Orange Village also has been digging around the garden. He worked with Mayor Kathy Mulcahy to start up the garden in 2010 and find the best location. The garden is part of the Orange Village Park and is located on Emery Road. The village already owned the property before the community garden was created.

“I got tired of the deer at my home garden having a salad bar,” Mr. Rosenberg said of his desire to start the garden more than a decade ago.

“Now we get the truth,” Mr. DiGeronimo said with a chuckle.

Mr. Rosenberg said that Mayor Mulcahy used her spending authority to start the garden at the time. Village Council granted a variance for a fence to keep the critters out, such as deer, rabbits and groundhogs. Nearly every year, the garden has expanded. There are now 69 raised beds and a waiting list at the start of every season. Orange Village residents are prioritized for spots over other applicants. There used to be a larger common area with picnic tables, but the number of raised beds kept increasing so now the space is “maxed out,” Mr. Rosenberg said.

There was a shed in the park that was moved to the community garden so it could be used for storage. It houses tools and wheelbarrows. The service department installed a waterline so there is a spigot every three or four plots, Mr. Rosenberg said. All the residents need to bring are the plants and a hose.

Mr. DiGeronimo said he has been gardening for 60 years. He grew up in Moreland Hills on a 7.5-acre lot on Chagrin Boulevard, where the Moreland Commons development is now underway. He said his father taught gardening at John Adams High School in Cleveland.

Mr. Rosenberg first started gardening with his great-uncle, who had a cottage in Willoughby on Lake Erie. Mr. Rosenberg stated the importance of maintenance in the garden. He tries to emphasize to new gardeners that they cannot simply throw seeds in the ground and harvest the vegetables at the end of the season. Without proper maintenance, the plots could easily be filled with weeds. He said there are strict rules that gardeners must follow.

“If you took off two weeks, you were in trouble because of the rain,” Mr. DiGeronimo said.

They said that the garden has two growing seasons, April through June and July through September. Mr. Rosenberg employs the square foot gardening method, which divides the plot into small squares with the goal of growing more crops in less space.

Over the years, Mr. Rosenberg and Mr. DiGeronimo have picked up tips and tricks through trial and error. Mr. Rosenberg places a white cloth over his lettuce so it can grow all summer long without the scorching hot sun ruining the plant.

“I go by the season. Everything was something else in April or May. I flipped them over to the hot crops when they were done. If you get lucky, it works,” Mr. DiGeronimo said. “The last couple years we had snow in May. People were planting tomatoes out here in early May and I said ‘Something’s wrong with this climate. You can’t do it.’ The nights need to be above 60 [degrees] for tomatoes and peppers to grow. The days weren’t even above 60.”

“A lot of people were replanting,” Mr. Rosenberg added.

Even though the weather can be unpredictable, he said, “you get the bug” and people return year after year. Mr. DiGeronimo said he likes to share his vegetables with family and friends. Some will cook for him with the crops, such as stuffed zucchini and stuffed peppers.

He described the community garden as a “no politics zone” where neighbors and friends come to peacefully garden and enjoy the warm weather. Both gardeners are looking forward to another season at the garden next spring.