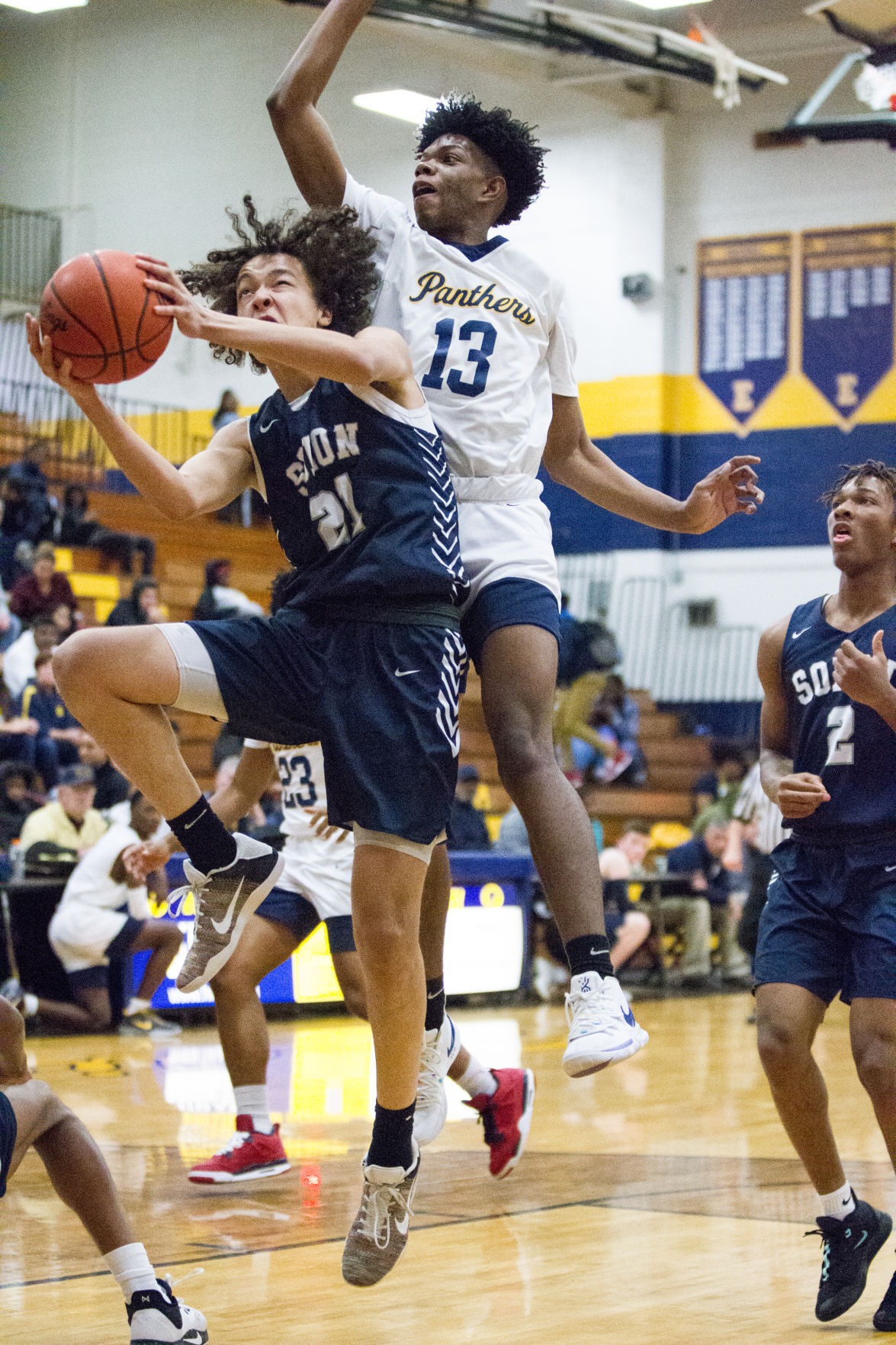 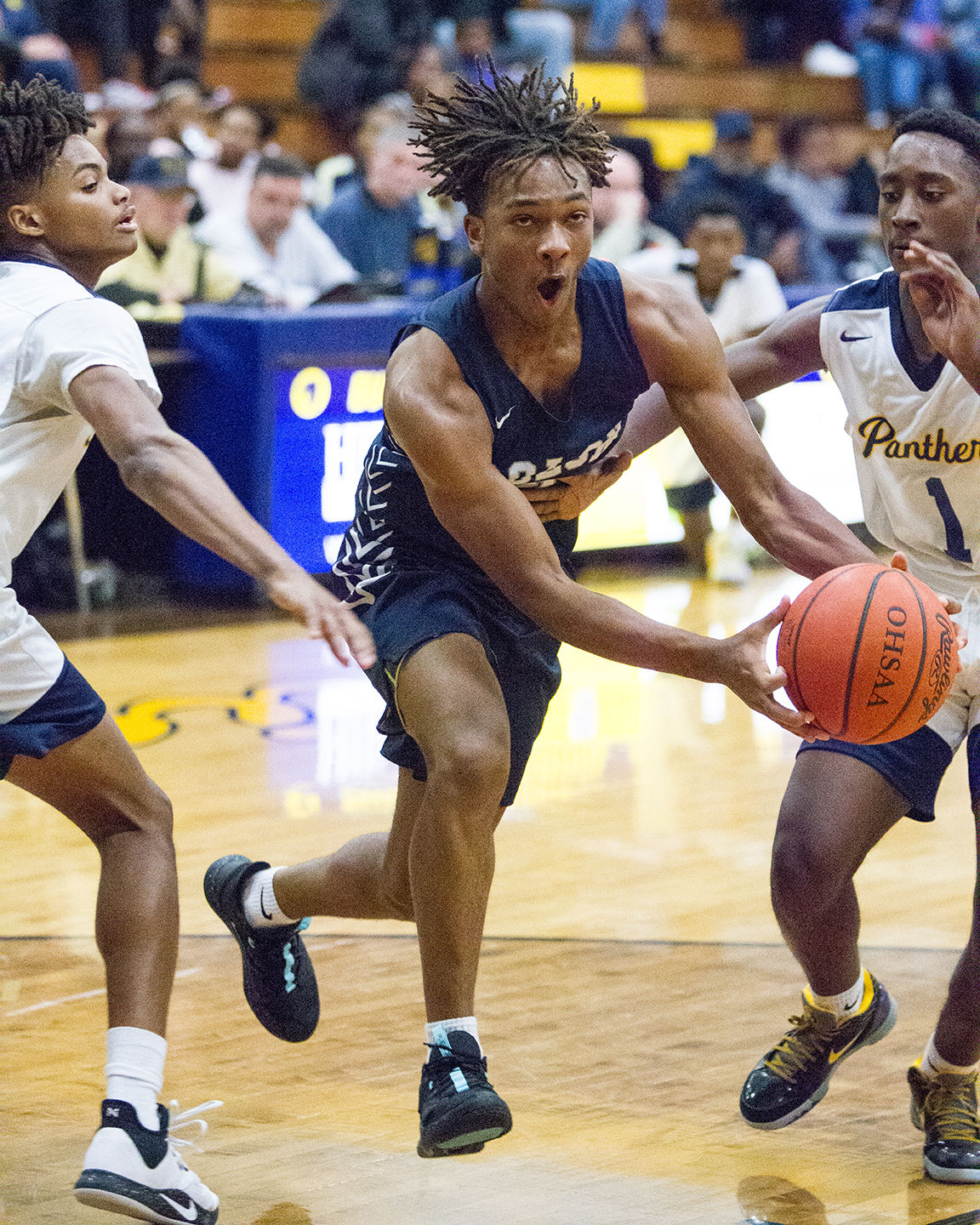 Solon 6-foot junior Marcus Steele gets after his game-high 21 points against the defense of Euclid juniors Steven Key (left) and Khaaron Allen. 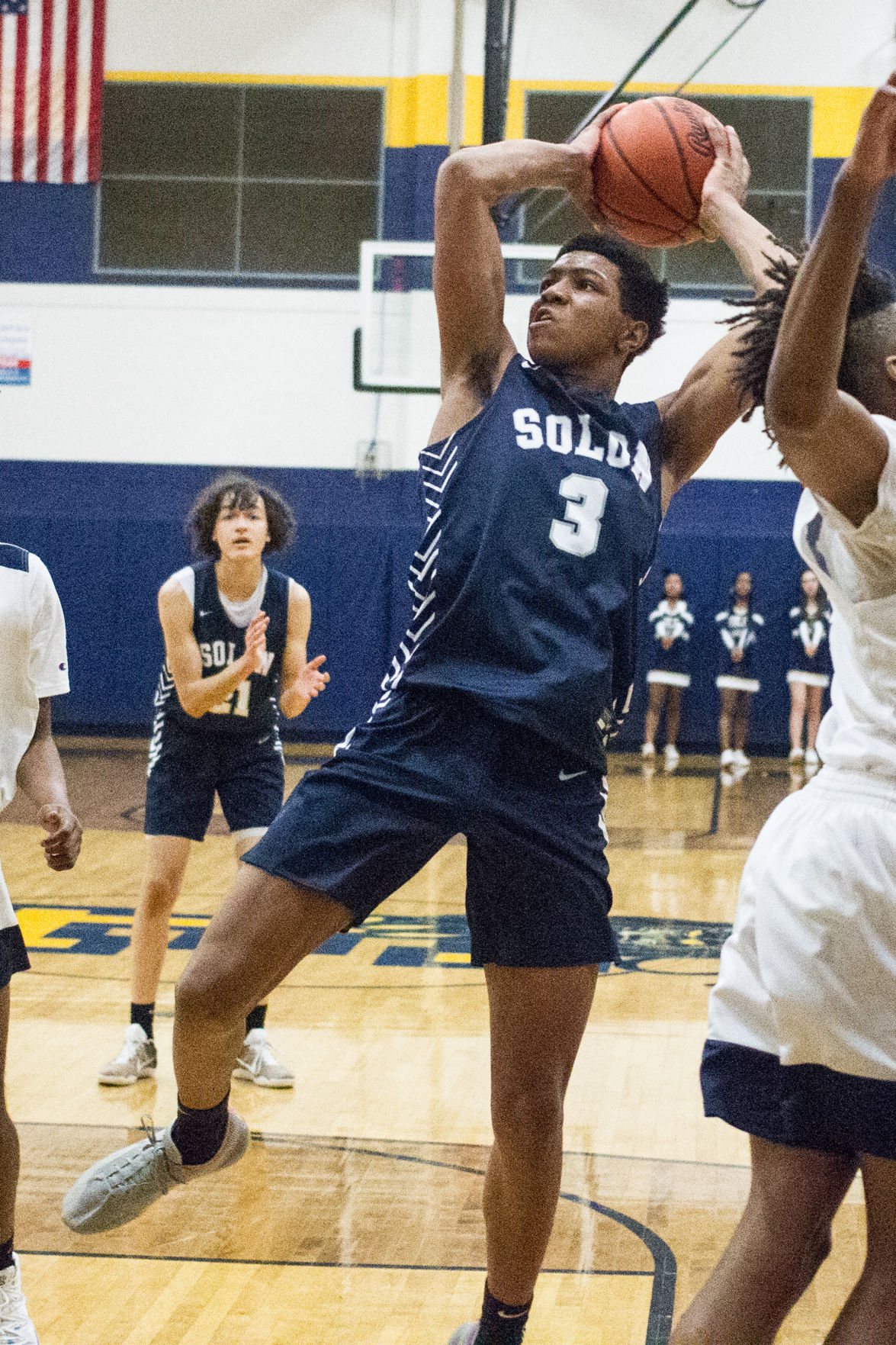 Solon 6-foot-2 junior Jimmie Williams pulls up for a fade-away jumper in the paint during the Comet cagers’ 52-51 road win against Euclid on Friday. 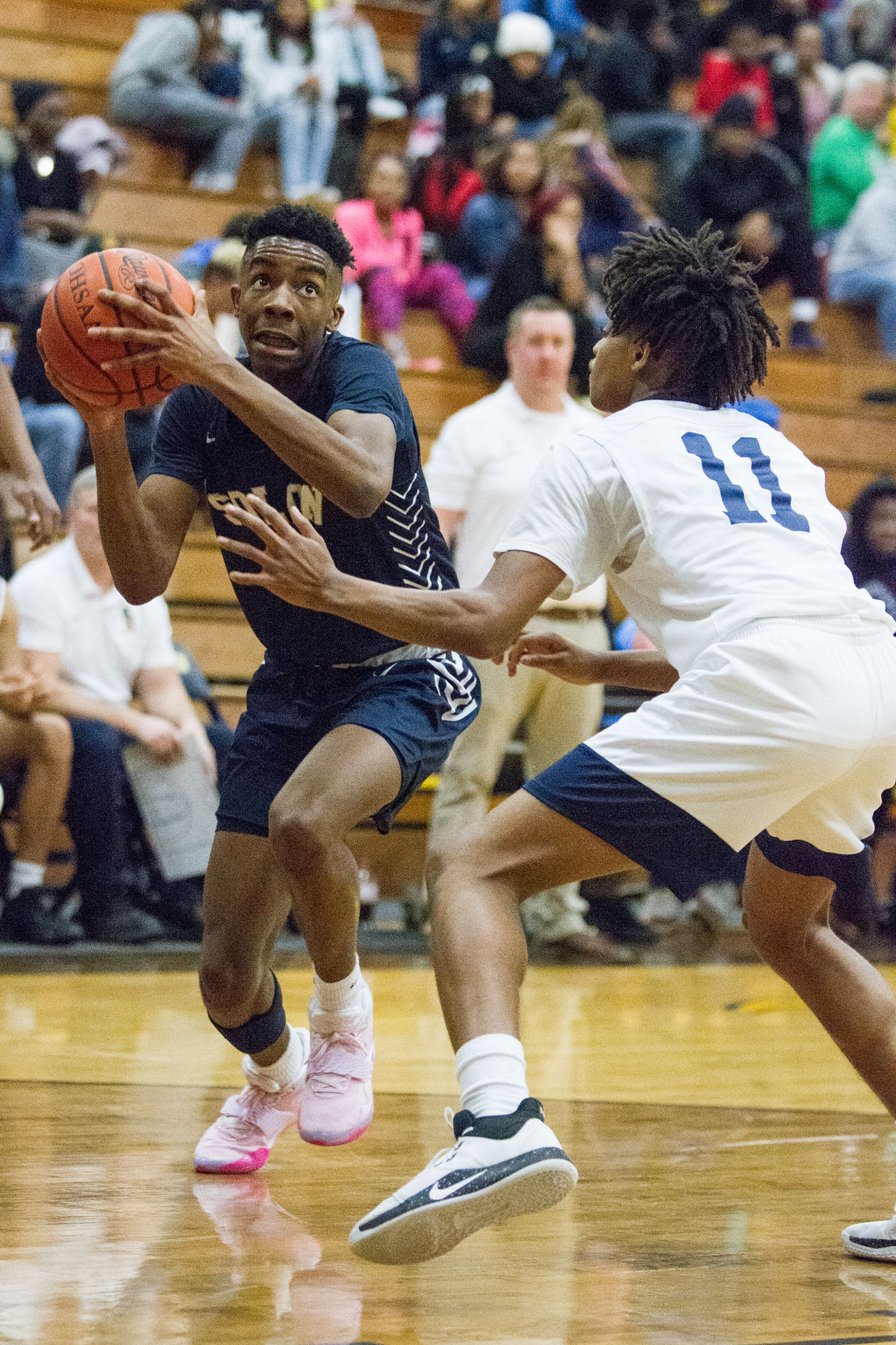 Solon 6-foot junior Marcus Steele gets after his game-high 21 points against the defense of Euclid juniors Steven Key (left) and Khaaron Allen.

Solon 6-foot-2 junior Jimmie Williams pulls up for a fade-away jumper in the paint during the Comet cagers’ 52-51 road win against Euclid on Friday.

Behind a pair of one-possession victories last week, the Solon boys basketball team pulled up its big-boy pants and announced its arrival to the rest of Northeast Ohio.

Sure, after the Comet cagers started their campaign at 1-2 with a pair of blowout losses against Greater Cleveland Conference foes Shaker Heights, 80-59, and Medina, 65-41, no one probably expected Solon to be the threat it’s been the past three years, or even the past four years, if one includes the 13-13 Comets from 2016, who upset Mentor in the district title game.

After all, working four new starters into the lineup, including 6-foot-4 sophomore Sam Marbury and 5-foot-10 freshman Rayquan Thompson, as well as a junior-heavy bench, was going to take some patience over at Solon – at least that was the original notion.

But behind the experience of 6-foot junior Marcus Steele, the Solon boys have won six of their past seven games and did not falter under pressure during a 70-67 upset of Mentor last Tuesday, or during a 52-51 road edging of Euclid on Friday, improving their record to 7-3 with a 4-2 mark in the Greater Cleveland Conference.

“It was a big week for our guys,” Solon sixth-year head coach Tony DeCesare said. “I don’t know how many people thought we’d go 2-0 going into it. But we played two very good games.”

Specifically against Mentor, the defending GCC champion and reigning Division I Euclid District champion, Solon outscored the Cardinals, 17-12, in the fourth for the three-point victory. Solon’s Marbury led the way with 23 points, including five of the Comets’ nine 3-pointers.

After Steele had led the scoring column in Solon’s previous three contests, Marbury had no problem rising to the spotlight late in the game, DeCesare said.

“In the third and throughout the fourth quarter, he had some really big shots,” the coach said. “Every time Mentor made a run and seemed to close it to one or take the lead, Sam (Marbury) came back and hit a big three to give us the lead right back. He hit three late in the game that we don’t win without him making those shots.

“And getting a win on that kind of stage against that kind of opponent as great as Mentor, to be able to make those plays, our guys really fed off of Sam that night.”

Solon and Mentor have played 12 times in the past four seasons, with Solon beating the Cardinals in the 2016 and 2018 district title games and Mentor outing the Comets in the 2017 district final and in last year’s district semifinal, 60-58.

Three days later, when Solon hit the road to take on Euclid in Friday’s league battle, Marbury came out and scored eight of the Comets’ 10 points in the first quarter, as the rest of the Comets got off to a flat start offensively, DeCesare said.

“It really started to look like it was going to be another one of those performances,” DeCesare said of Marbury, who didn’t score again after the first. “It didn’t end being, but, I’ll tell you what, those early baskets by (Marbury), when nobody else seemed to have their offense, the game could have gotten away from us.”

“We needed to slow the game down and not let them get up and down,” the coach said. “A lot of their points were coming in transition, and their guards do a good job of pushing the pace and getting easy buckets.

“So, we didn’t pick up and press until late in the game. We really tried to make it a half-court game. And then in the half court, we just tried to load up the paint with side defenders and make them play through other guys. Their guards do such a good job of beating the initial defender and then creating from there.”

Out of intermission, Solon’s Steele started to take over with 10 of his game-high 21 points to help tie the game at 41 by the end of the third quarter. It was his fourth 20-plus-point outing in the past five games for the Comets.

After Steele’s 21 points and Marbury’s eight, Chambers finished with six, 6-foot senior Chad Marks had five and junior Jimmie Williams, Vauss and Thompson scored three apiece to chip in on a night that shots weren’t falling like they did against Mentor.

“I thought, coming out of the second half our guys played with really good energy, and we saw it, especially on the offensive glass,” DeCesare said. “We were able to steal some possessions by getting second and third chances. Brandon Chambers and Marcus Steele got us some baskets to really get us going. And, down the stretch, Marcus really took control of the game. He’s really stepping into his own as a player.”

“With a lot of new guys and with the schedule we play early on, we kind of expected some bumps in the road and some tough stretches,” DeCesare said. “We’ve won some games that we thought we should, and we lost to some teams like Shaker, Medina and Green, which have a combined five losses.

“So, you’re always wondering when things are going to kind of click, and I think a lot of it was the coaching staff figuring out how to best use the guys. But we were never worried about the talent of this group. We told them from the start that this is a team talented enough to compete for a league and for a district. We just need to get a little bit of experience, and these guys have really figured out how to play together to win some games.”