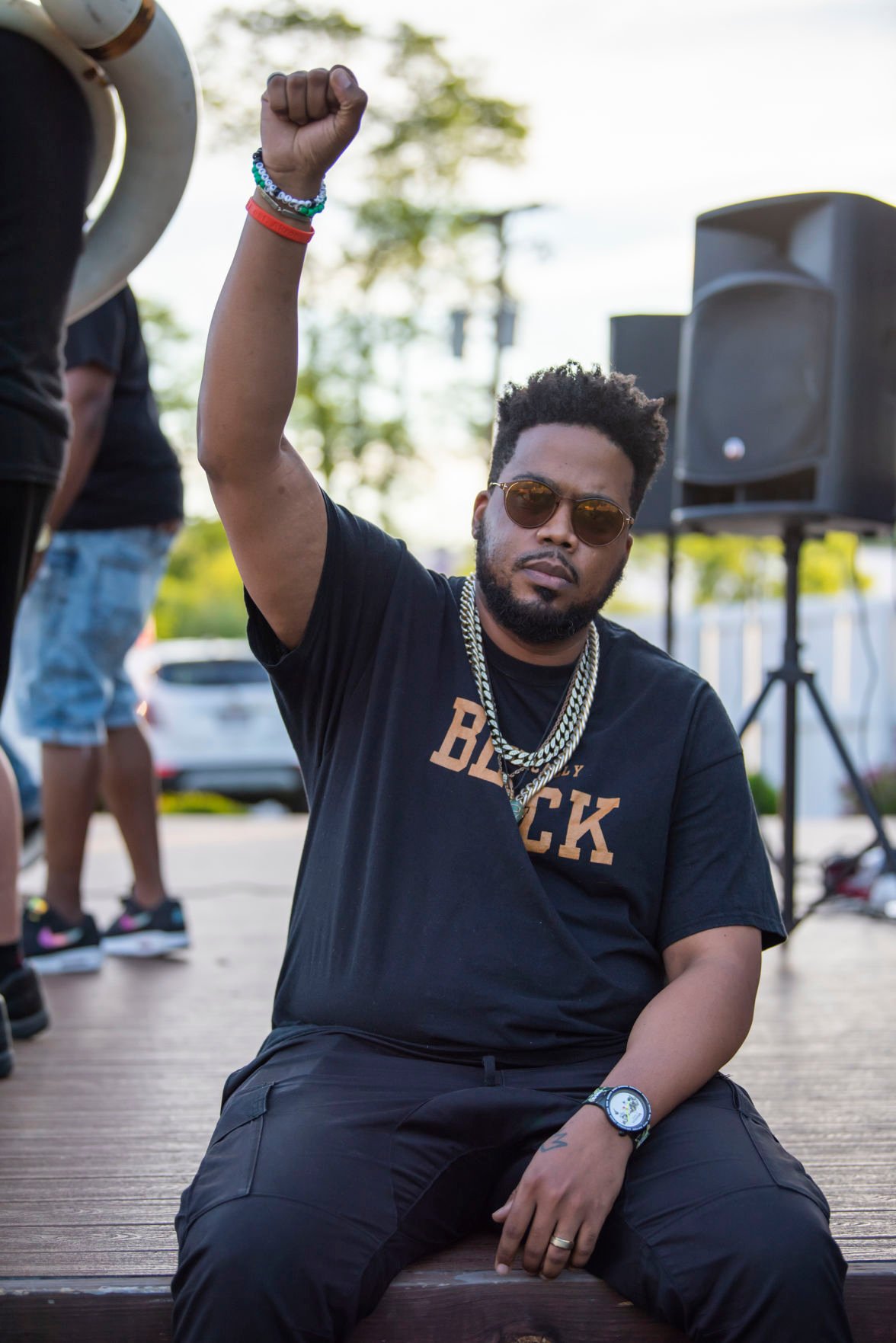 Archie Green, a 2004 graduate of Solon High School, mental health advocate and hip-hop artist, founded Peel Dem Layers Back, an organization that empowers adolescents and young adults to live a mentally healthy life. Through hip-hop, Mr. Green presents an unconventional approach and works to break the stigma of mental illness among African Americans. He took the stage last week as part of a Juneteenth celebration at the Mayfield Road Drive-In in Chardon to commemorate the end of slavery. 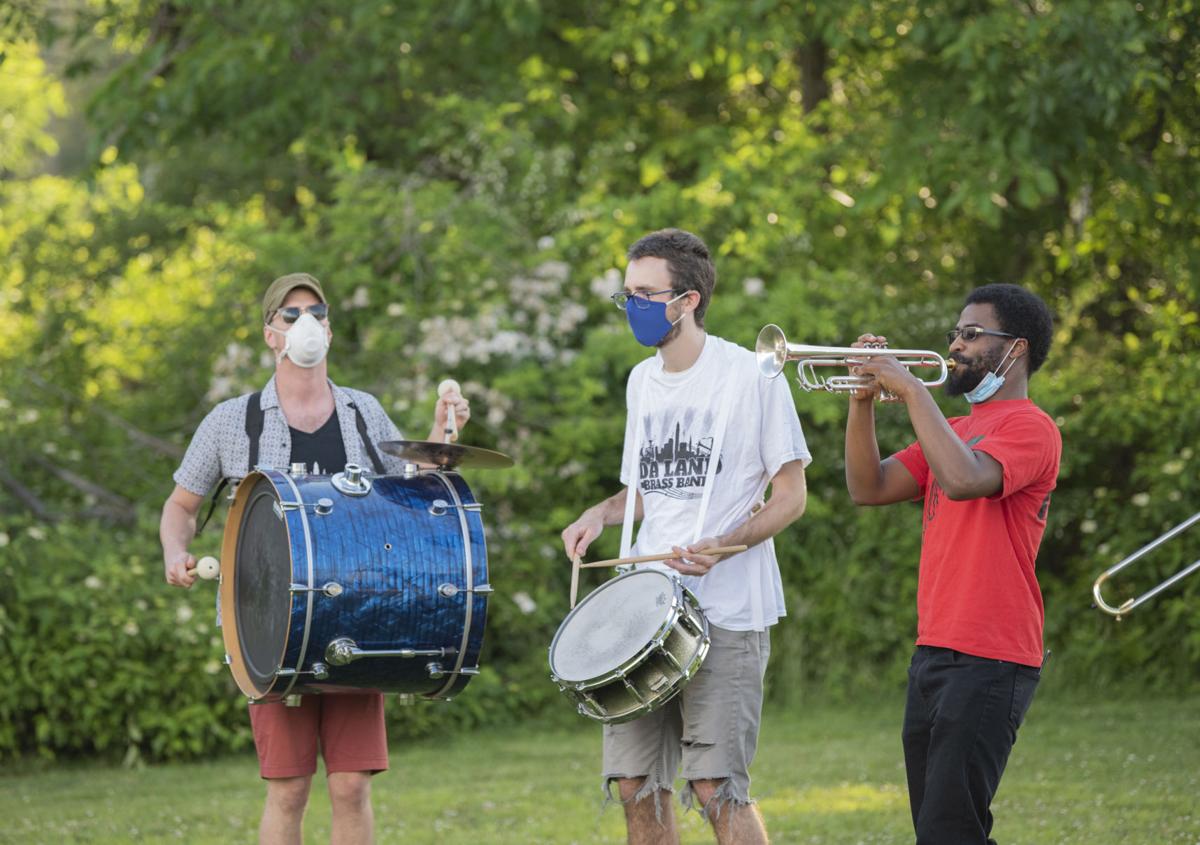 Members of Da Land Brass Band take part in a Juneteenth event presented at the Mayfield Road Drive-In in Chardon.

Archie Green, a 2004 graduate of Solon High School, mental health advocate and hip-hop artist, founded Peel Dem Layers Back, an organization that empowers adolescents and young adults to live a mentally healthy life. Through hip-hop, Mr. Green presents an unconventional approach and works to break the stigma of mental illness among African Americans. He took the stage last week as part of a Juneteenth celebration at the Mayfield Road Drive-In in Chardon to commemorate the end of slavery.

Members of Da Land Brass Band take part in a Juneteenth event presented at the Mayfield Road Drive-In in Chardon.

There were many times in his life when Archie Green, a 2004 graduate of Solon High School, questioned why he was alive.

He battled depression since he was a child, he explained, and often felt isolated.

He turned his life around while establishing in 2016 Peel Dem Layers Back, which aims at empowering young adults to live a mentally healthy life through the power of hip-hop music.

But his story of survival goes much farther back.

Growing up in Bentleyville, Mr. Green was the only African American at Chagrin Falls schools at the time, he said, before transferring to Solon High School as a sophomore.

“I endured isolation, racism and prejudice and all different types of ills any black male in that situation would receive,” Mr. Green, 35, said. “As a result of that, I felt depressed about my circumstance.”

His only salvation at that time was rap music, a genre he discovered at age 13 after being inspired by the likes of Jay Z and the Notorious BIG.

“The first time I saw the video for ‘Hard Knock Life,’” I knew I wanted to be a rapper,” Mr. Green, now a resident of Shaker Heights, recalled.

He began writing his own raps and sharing mix tapes he would make with friends.

“Over time, it became more than just a hobby,” he explained.

It was a means to get him through the hardships he faced, Mr. Green continued, and helped him feel less alone.

“I worked my way through things,” Mr. Green said, noting that by the time he got to Solon High School, he was able to befriend students, both black and white.

He went on to attend Ohio Wesleyan University where he continued to endure racism, he said.

“It was more of the same,” Mr. Green said. “I just couldn’t deal with it anymore.”

He then transferred to Morehouse College in Atlanta, Georgia, a historically black college, which ended up being one of the pivotal points in his life. He earned an degree in economics there.

“It was the greatest experience I could have,” Mr. Green said. “I was seeing black men of all walks of life.”

He was at the epicenter of black culture in Atlanta, he noted, and carries that experience with him to this day.

Despite that positive experience, though, Mr. Green continued to have lows in his life.

“Depression in those years was not as prevalent,” he said, adding that he even received notoriety during a competition for unsigned rappers with his song “I Owe You,” being selected for a mix tape by Talib Kweli.

He was starting to get noticed, having his music featured on prominent blogs under his rapper name Soul Klap. But things started to slip after he was unable to find a job upon completing a master’s degree in music business at New York University. So he returned to Ohio.

“It was common in those days,” he said, “two degrees and no job.”

Mr. Green moved in with his parents, broke off an engagement and had no money.

He eventually got a job at Nordstrom and began working part-time at Beech Brook, a behavior health agency for youths.

It wasn’t until he got a DUI in late 2013 and spent the night in jail, that he got advice to see a therapist and things started to turn around.

“I had my license suspended, had a panic attack and would spend days in bed, drinking and smoking and really wondering, ‘Why am I here? Why would God put me through this?’”

He eventually was diagnosed with clinical depression and through therapy, which he still goes to today, learned how to cope using breathing techniques, meditating and utilizing his creativity.

He wrote the song “Layers” about how therapy turned his life around.

“I wanted to share that with my community because at that time, not a lot of black artists were talking about therapy,” he said.

That song, which appeared on vice.com went viral, with more than 25,000 streams in two weeks. At that point, Mr. Green said he realized he needed to start advocating for the black community, which is when he founded Peel Dem Layers Back.

The mental health advocacy organization, which is in the process of filing for nonprofit designation, has a mission of culturally educating, equipping and empowering adolescents and young adults in the black and brown community with essential tools to live a mentally healthy life, he explained.

“We take a nonconventional approach to mental health advocacy,” he said. Through open mic nights, concerts and speaking engagements, Mr. Green shared his stories encouraging others to do the same.

He has taken his message to the Cleveland Municipal School District, where students open up about suicide and daily pressures.

Peel Dem Layers Back does not have a physical location, but primarily serves the City of Cleveland.

Prior to the pandemic, Mr. Green would host events, concerts and workshops with various schools. These days he is putting on virtual webinars teaching self-love during the quarantine, while hosting dynamic speakers of people of color.

He has a platform on Instagram and recently performed at Mayfield Road Drive-In in Chardon last week, as part of Juneteenth, a holiday celebrating the emancipation of slaves.

Mr. Green, who is married to Nike Olabisi-Green, said he has truly found his calling.

“This is why I am here,” he said. “God gave me this cup for a reason,” he said. “My pain is also my salvation.

“Through my pain I have been able to not only heal myself, but countless others with my music and mental health advocacy.”