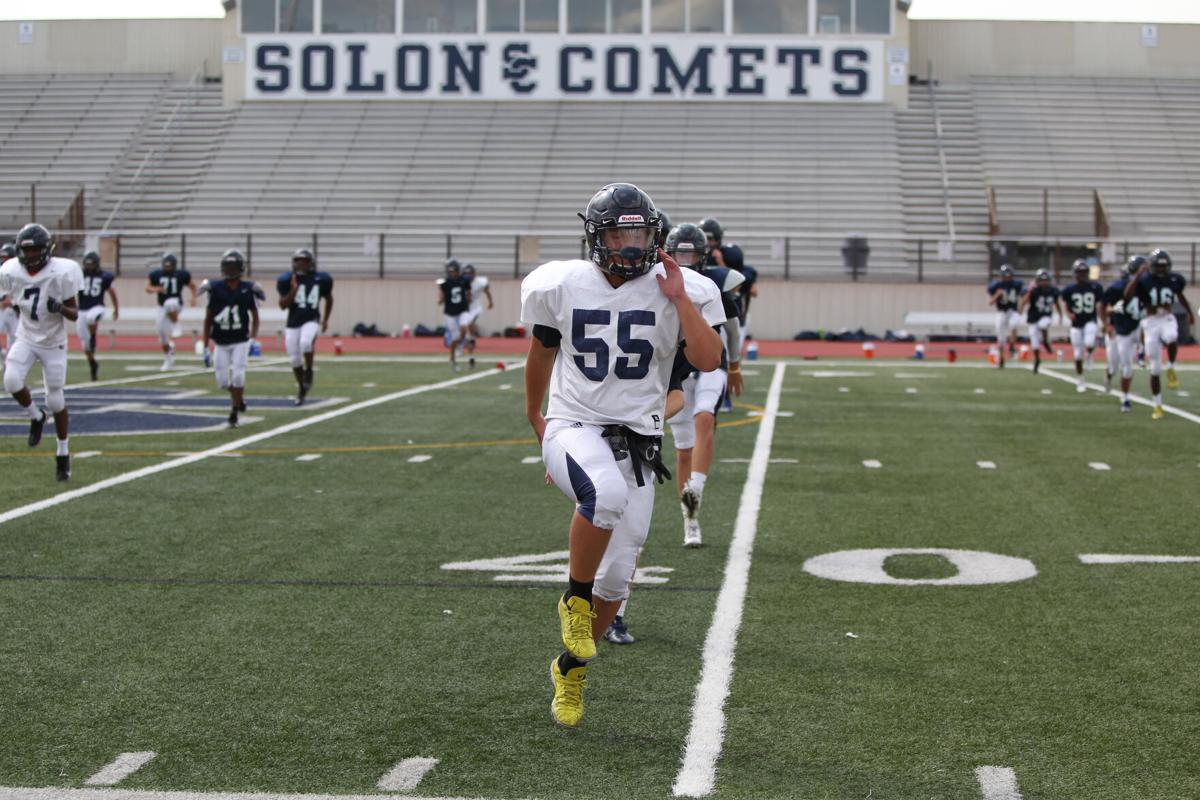 The Solon Comets gear up for their 2020 campaign during preseason practice last week. After getting a late start with their first official practice held on Aug. 31, the Solon gridders will hit the road to make their debut against Division III AP No. 12-ranked St. Vincent-St. Mary at 7 p.m. Thursday at Green Street Stadium in Akron. 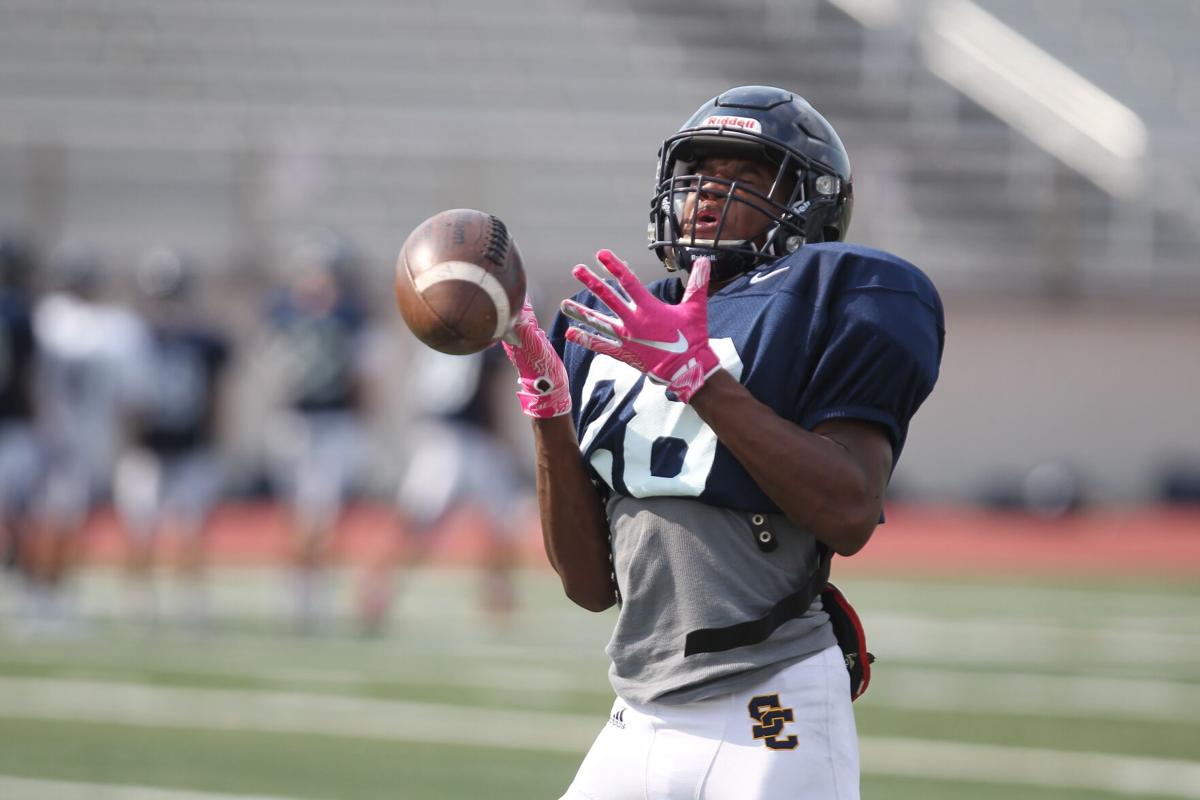 With an all-rookie wide receiver corps hitting the gridiron for Solon this season, 5-foot-10, 170-pound freshman Bryce West is one of five Comets battling to get playing time as a route runner. 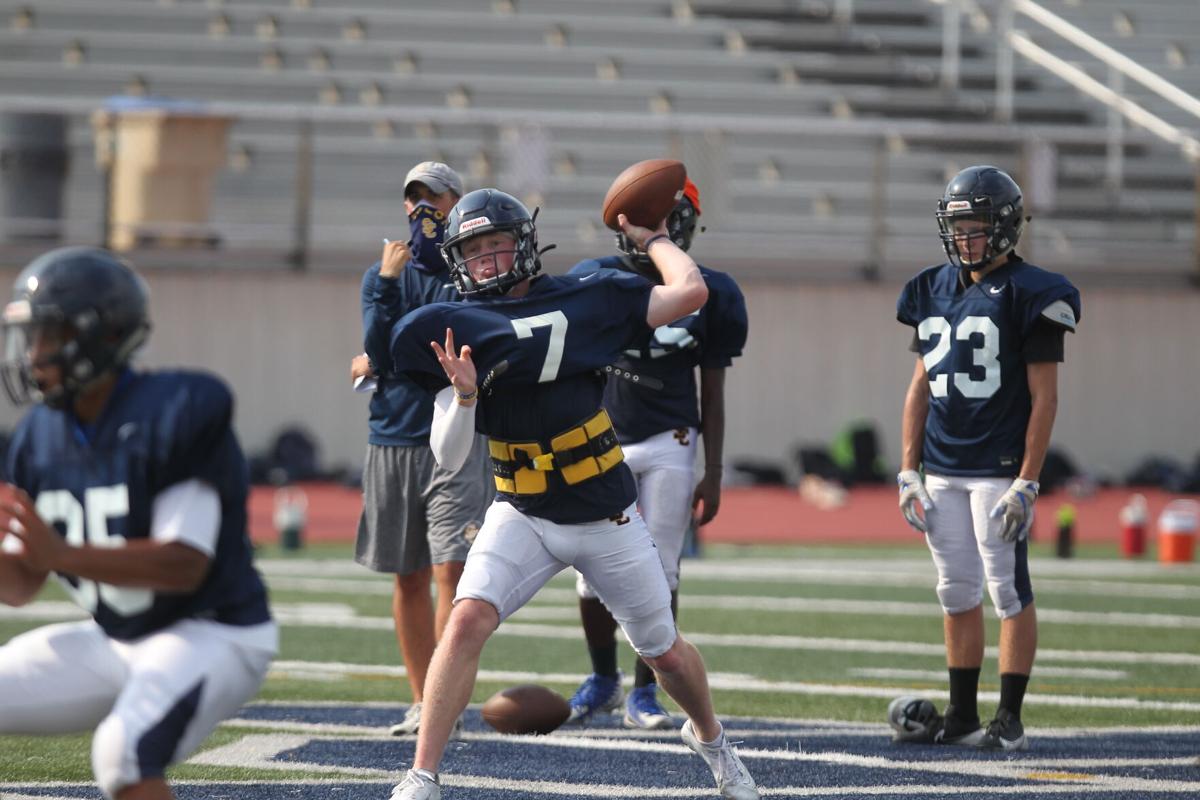 The Solon Comets gear up for their 2020 campaign during preseason practice last week. After getting a late start with their first official practice held on Aug. 31, the Solon gridders will hit the road to make their debut against Division III AP No. 12-ranked St. Vincent-St. Mary at 7 p.m. Thursday at Green Street Stadium in Akron.

With an all-rookie wide receiver corps hitting the gridiron for Solon this season, 5-foot-10, 170-pound freshman Bryce West is one of five Comets battling to get playing time as a route runner.

Football is a complex game, but the Solon gridders will be a little less spiffed up when the Comets join the rest of Ohio high school football for week-four action this Thursday.

Solon didn’t officially start practicing until Aug. 31, because of recommendations from the Cuyahoga County Board of Health, and in turn missed the first three weeks of the 2020 regular season.

So, when the Comets hit the road to take on Division III AP No. 12-ranked St. Vincent-St. Mary (2-1) at 7 p.m. Thursday at Green Street Stadium in Akron, they’ll be focused on keeping it simple, said 18th-year head coach Jim McQuaide, who has a 141-53 record at the helm.

“Every offseason you spend a lot of time adjusting and looking at things that you would like to implement – plays, schemes, all those things,” he said. “We’ve cut that down drastically. So, we’re trying to be as condensed and simple as possible and just keep working every day on the same items to see if this week we can get better at these items.

“We’re not going to do a lot of different things, but the things we do, do them very well.”

As American aeronautical and system engineer Kelly Johnson would say, “Keep it simple, stupid,” or KISS, design principle adopted by the U.S. Navy in 1960 that states most systems work best if they are kept simple rather than made complicated. Therefore, simplicity should be a key goal in design.

That principle will be executed by a trio of third-year veteran starters on offense, including 5-foot-11, 185-pound senior quarterback Pat McQuaide, 5-foot-10, 205-pound senior running back Khalil Eichelberger and 6-foot-4, 250-pound senior tackle Najee Story – all three are team captains.

McQuaide was a first-team all-Greater Cleveland Conference and second-team all-Northeast Ohio District selection who completed 171 of 254 passes for 2,257 yards with 24 touchdowns and two interceptions last season.

“He’s bigger and stronger than he was last year,” coach McQuaide said. “He’s a very competitive guy. He works very hard at the game. He throws the ball well. He’s playing defense also for us as a safety, and he does some work on special teams.

“So, for you to have a good team, your good players need to play well, and he’s one of those guys for us.”

Eichelberger also returns as a first-team all-league and second-team all-district gridder who had 188 carries for 1,098 yards with 11 touchdowns and 26 catches for 294 yards with two scores last season.

The Comets believe they should be able to run the pigskin this campaign and that Eichelberger should be one of the best backs in the area, coach McQuaide said.

In the offensive and defensive trenches, Solon has six guys who started or alternated in 2019.

“Those are four guys that have played in the past,” McQuaide said. “That’s another reason we’re working hard to run the ball with the guys that we have, and they should be the leaders of our offensive line.”

On the defensive front, Story returns at defensive end, where he had 72 tackles, nine for losses, and two fumble recoveries last season, while 6-foot, 265-pound sophomore tackle Jamari Holmes returns with 29 tackles, two for losses, and 6-foot-1, 260-pound senior tackle Scott Siegel was an alternate with 16 tackles a year ago.

The linebacker corps should also be a strength of Solon’s defense with two returning junior starters, including Oldenburg, who had 56 tackles and three interceptions last year, and 5-foot-11, 215-pounder Markell Green, who had 76 tackles, five for losses.

Meanwhile, Patriarco, four tackles last season, and Eichelberger, eight tackles with a fumble recovery, are also in the mix with a host of other guys to get reps as linebackers.

“We move guys around a lot,” McQuaide said. “So, we can go to a three-front or even a five-man front. We try to look the same, and then when the ball is snapped, we try and do some different things off of that. So, we spend a lot of time trying to disguise what we’re doing, both coverage wise and up front.”

In the secondary, quarterback McQuaide will be a two-way player at safety, while the five previously mentioned rookie receivers – Salerno, Bican, Kpassou, Nathanson and West – will be the main guys taking lead roles in the other safety and cornerback spots.

“You can only dress 60 guys, and that’s the same for every team this year,” coach McQuaide said. “So, that puts a lot of guys doing more than one thing because of injuries and everything else.”

As of earlier this week, the Comets still had a number of guys battling it out for starting kicking duties, while Morlani looks the part for punting duties.

Returning from a pair of 8-3 campaigns that included first-round playoff losses to Canton McKinley, a Division I program that is ranked No. 5 in the first AP poll, the Comets have adjusted their goals with the parameters of this shortened season.

“We always say a league title is one. Well, we don’t have that,” McQuaide said. “And then the next one is to get into the playoffs and earn the right. Well, we’re in the playoffs. We have that. And then now, the last two years, we’ve had two big disappointments. Both times we were winning the game against Canton McKinley in the second half and we came up short.

“So, we can almost look at these (regular season) games as our preseason. We have two games for sure, but we’re still trying to find a third to get us ready to do a better job when we get into the playoffs starting October 9.”

The Comets are still in search of a week-five opponent for Sept. 25, while they’re scheduled to travel to take on league foe Medina at 7 p.m. Oct. 2.