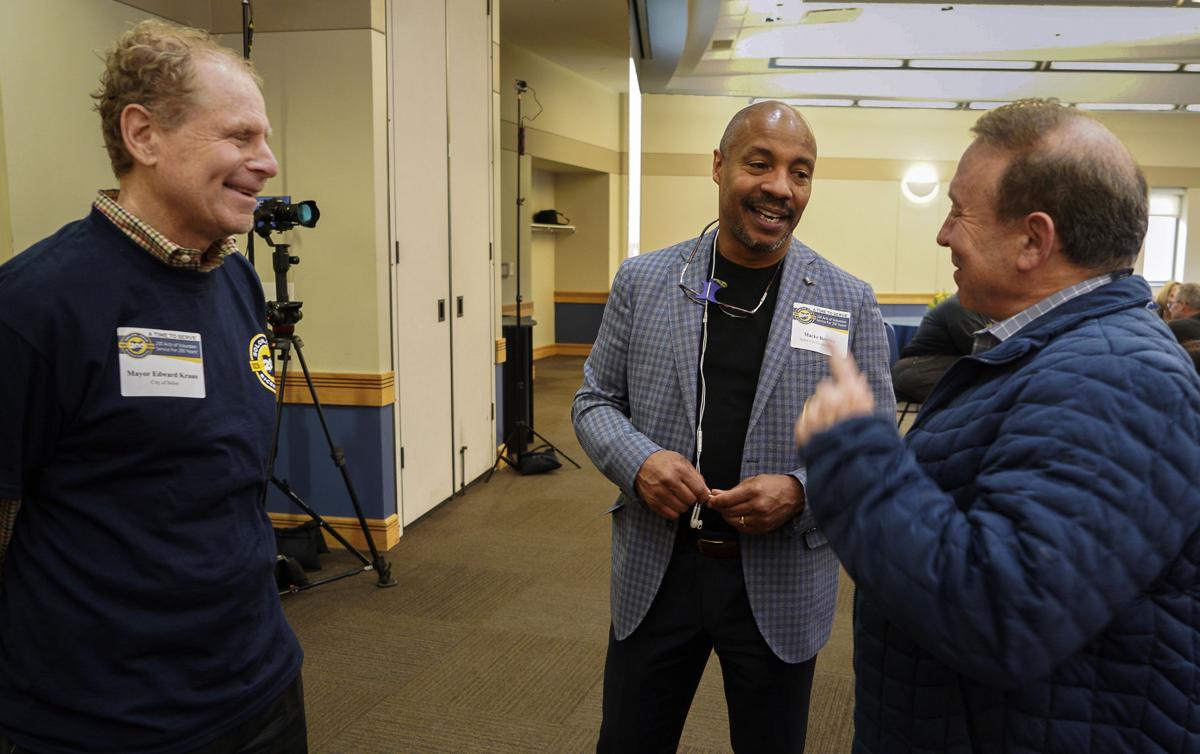 Solon Mayor Edward H. Kraus chats with Ward 1 Councilman Macke Bentley and Gary Biales, vice-presidents of development for Omni Senior Living. They gathered during the launch of “A Time to Serve – 200 Acts of Service.” The event was held at the Solon Community Center recently.

Solon Mayor Edward H. Kraus chats with Ward 1 Councilman Macke Bentley and Gary Biales, vice-presidents of development for Omni Senior Living. They gathered during the launch of “A Time to Serve – 200 Acts of Service.” The event was held at the Solon Community Center recently.

What the city of Solon does best is serve – Mayor Edward H. Kraus said – which makes its bicentennial launch of 200 Acts of Service so fitting.

Mayor Kraus addressed a crowd of about 60 who gathered at the Solon Community Center last week for the launch of “A Time to Service – 200 Acts of Service,” a joint venture of the city and the Greater Cleveland Volunteers. The luncheon was catered by 56 Kitchen in Solon, who provided box lunches, with floral arrangements provided by Duffy’s, also in Solon.

“When we started thinking about the bicentennial, we wanted to honor, to build and to showcase our city,” Mayor Kraus said, “but when we started talking about our core, what we do best, it is serving.”

Whether it is the residents, businesses or those in need, the city is proud of its various types of service, Mayor Kraus continued, including that of its safety forces and city departments.

As part of this bicentennial initiative, the city has partnered with Greater Cleveland Volunteers to help organize volunteers and keep track of the completed acts of service. The kick off marked the launch of this effort on the city’s website at solonohio.org. Those interested will be directed to the Greater Cleveland Volunteers website to fill out a user-friendly registration form.

“This is a great opportunity to get involved and show your support for our great city and for the region as a whole,” Mayor Kraus said.

Volunteer options will be both local in Solon and the Greater Cleveland area, and include such opportunities as those with the Solon Food Pantry and the Solon Senior Produce distribution as well as opportunities at Hospice of the Western Reserve in Cleveland or the Maltz Performing Art Center and American Red Cross, among others.

“The intent is to have our residents show support and give back to the community,” Tracy Sullivan, manager of the Solon Center for the Arts, said. The art center will also take part in the program with a volunteer opportunity.

Attendees of the launch also included faith-based organizations as well as the Solon Italian Club, Solon Benevolent Fund, Solon Rotary Club and the Solon Kiwanis Club, among others.

The Rev. Cynthia Theobald, of the Solon United Methodist Church, said she hopes to find volunteers to help with the church’s Treasure Trunk and Learning Garden as well as give back with church members taking part in volunteer acts for others.

“We want to volunteer and to receive volunteers,” she said.

Jim Hyde, of the Solon Rotary, said that his organization is “obviously vey supportive of this.

“It is a lot of what we do already,” he said, including their role in the Solon Food Pantry and the produce distribution for Solon seniors.

“We will do what we normally do and look for great acts of service,” Mr. Hyde said.

As part of the launch Nancy Dzurnak, program manager for the Greater Cleveland Volunteers, gave a background on her organization as well as the benefits of volunteering.

She thanked the City of Solon for partnering with her organization.

“Volunteers are essential to non-profits,” she said. “They help any agency meet its mission.”

Ms. Dzurnak said that, for those volunteering, it also brings many benefits, such as helps with feelings of loneliness and isolation. “It really helps you grow and forget your own problems. It gives you a wonderful sense of purpose.”

“Service is the most important thing we do,” Mayor Kraus said.