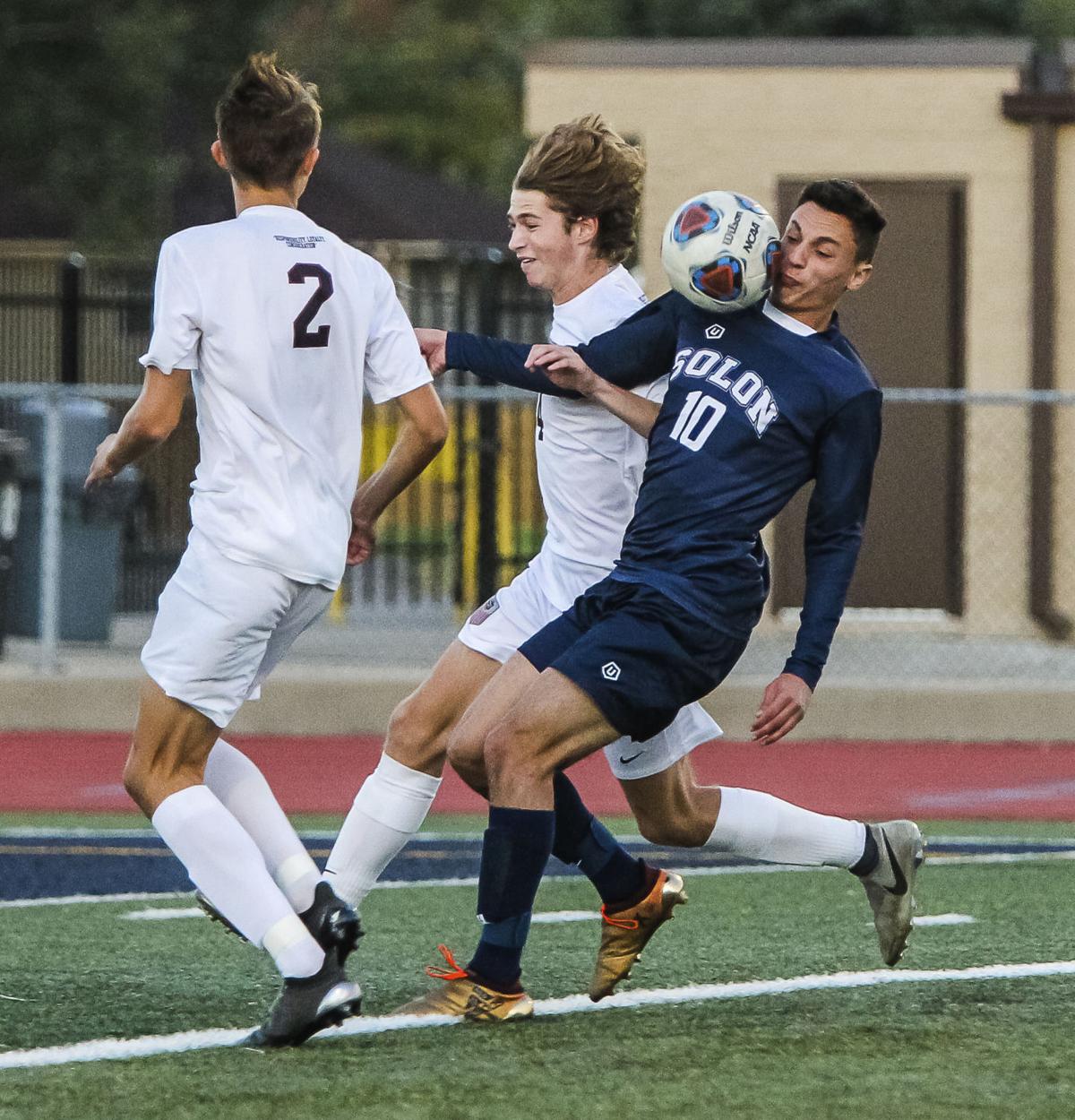 Solon senior Ethan Berkovitz, a midfielder for the Comets' varsity soccer team, made his commitment March 31 to continue his athletic career with the Battling Bishops at Ohio Wesleyan University in Deleware. 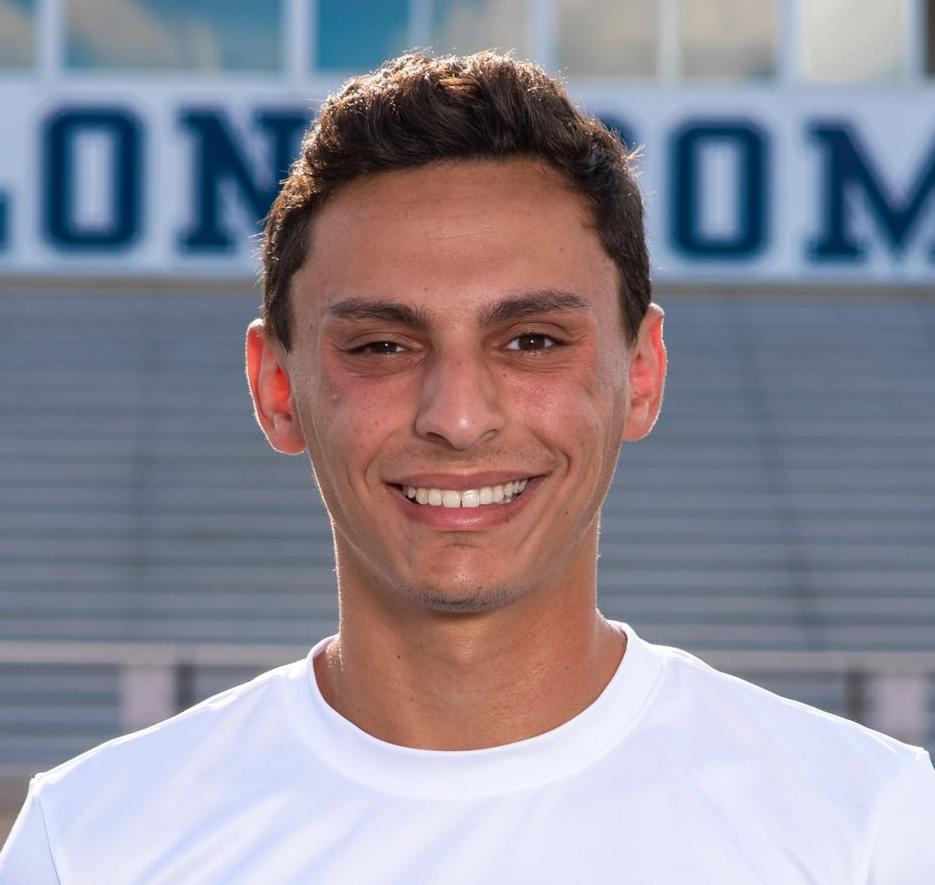 Solon senior Ethan Berkovitz had searched near and far, but when he drove down to Delaware, Ohio, in early March and took a tour through the Battling Bishops’ locker room, he was sold.

The dealmaker wasn’t a jersey with his name and number on it.

It wasn’t a state-of-the-art athletic facility with all the comparable perks of a pro athlete.

And it wasn’t some mythical lineup of good-looking college girls waiting to greet him.

No, none of that compares to the display of tradition. After all, tradition and sports are two in the same.

College football has the tradition of cadets marching the field before the Army-Navy game, a gridiron rivalry going back to 1890.

The Olympics feature torch-lighting ceremonies with the flame symbolizing the continuity between ancient and modern games, as well as the passing of traditions from one generation to the next.

The PGA Tour has the Green Jacket for winners of the Masters Tournament.

And down in Delaware, Ohio Wesleyan University has the tradition of a winning men’s soccer program, which includes a pair of NCAA Division III national championships, a record 40 NCAA tournament appearances and 10 Final Fours. It’s historically the most successful and intently followed sport on campus.

Solon’s Berkovitz decided to make his commitment to Ohio Wesleyan official on March 31, after starting his recruiting process his sophomore year.

“So, that was really something that really was motivating to me and caught my eye right away, thinking about how one day I’d have the opportunity to be on that wall as well. So, that was definitely a big factor in my commitment.”

That tradition comes with the stability of OWU head coach Dr. Jay Martin, the winningest coach in NCAA men’s soccer history, regardless of division. He’s guided his 43 Battling Bishop soccer teams to a 723-150-74 record at the helm.

Ohio Wesleyan men’s soccer hasn’t had a losing campaign since Martin took the reins in 1977. He’s also a professor at the university.

“That was really a dealmaker for me,” Berkovitz said. “Just seeing what he’s done over the past 40-plus years at the university and how well he’s done, he’s just really built a great foundation, which will now carry on forever and ever. He’s built a unique chemistry within the team that makes success, and it always has made success.

“And their goals and their standards are extremely high, which I like. It’s very motivating to know that you have goals that are through the roof, and they’re extremely attainable.”

Most recently, the Battling Bishops are coming off a 15-5-4 campaign – including a 7-1-1 mark in the North Coast Athletic Conference – which ended in the Sweet 16 of the Division III NCAA tournament, losing to Luther College, of Iowa. The score was 0-0 through two overtimes, before Ohio Wesleyan lost on penalty kicks, 6-5.

Also what set the Battling Bishops apart from other universities Berkovitz visited was their acceptance, he said.

“When I was with them, I felt like I was already a part of their team and already their friend, which is unique compared to other schools that I was at,” he said. “A lot of times, you feel left out or you don’t want to ask questions because you think they’re embarrassing. But, with them, I really just felt like I was able to be myself and talk to them however I wanted.”

A center midfielder for the Comets, Berkovitz’s senior season this past fall included a 13-6-1 district title campaign. He scored a team-high 19 goals and was a second-team all-Greater Cleveland Scholastic Soccer Coaches Association selection.

He netted two tallies in Solon’s 4-2 upset of No. 1-seed Hudson (11-5-3) in the district title game, when the Comets claimed their first postseason banner since former first-team all-Ohio goalie Will Meyer and company won the 2015 district title in a shootout with Hudson.

“Obviously, towards the end of my senior season was probably the most exciting soccer experience of my life,” Berkovitz said. “And I’ve played in a lot of big games with my high school team and my club team in different states and all over the place, but nothing really compares to that October soccer my senior year with Solon.”

Berkovitz also plays with the Cleveland Force Soccer Club, not to mention he made the U.S. Youth Futsal national team and competed in Costa Rica the summer before his sophomore year.

So, Berkovitz has represented his country on the international level. But his playing days at Solon were something special too.

“We talked a lot about what legacy we wanted to leave as seniors on the program, and it was really important to us that we did leave a legacy,” he said. “The year before we had won the conference championship, and then this past season we were able to win the district. So, we wanted to be remembered as the team that beat Hudson as the underdogs and beat them, 4-2, in the freezing rain.”

During his four years at Solon, Berkovitz and his fellow seniors grew the program with head coach Ryan Greenhill taking the reins their freshman season in 2016. The Comets went from four wins, to eight wins in 2017, to 11 wins in 2018, and to 13 wins this most recent season.

After winning the district title, the 2019 Comets lost, 4-1, against state No. 1-ranked Medina (20-1-1) in the regional semifinals, with Berkovitz netting Solon’s lone tally on a penalty kick.

Next season at Ohio Wesleyan, Berkovitz plans to room with soon-to-be-teammate Josh Cabacungan, a midfielder from Medina, he

The midfielder position is already deep at Ohio Wesleyan, with rising junior Hector Gomez leading the program as an all-American.

“I just know that there’s a lot that I’m going to be able to learn from him and take away from him, even if I’m not always on the field right from the get-go,” Berkovitz said. “Throughout my time at Solon, there were always good midfielders above me and older than me, like Jake Lynn, who went to play Division I soccer, and Pranav Iyer.”

On the academic side, Berkovitz plans to study business.

Berkovitz said he interviewed and was accepted to a selective program for business and economics students that is only officered to about 20 undergraduates a year.

“It’s a really unique opportunity that you get to work one-on-one and in small groups with professors, and you get to take a trip to New York with them, and you get a lot of mentorship and things like that,” he said. “But that was extremely unique compared to any other school that I would have a program that I would fit right into right away and be a part of, which was definitely another big decision-maker for me.”

Ohio Wesleyan was one of the last schools Berkovitz visited during his two years of searching. After considering schools from all divisions, and even NAIA programs, Berkovitz told himself one more visit would never hurt.

“Soccer recruiting is a lot on the player to reach out and do his own scrap work to try and get recruited,” Berkovitz said. “So, it’s a really challenging process, but it’s definitely one that’s fun looking back at now that it’s over for me. It’s definitely something that’s a part of my high school experience, for sure.

“But I knew it was important to me that I’d go and play soccer in college. So, I just needed to find that perfect place for me.”