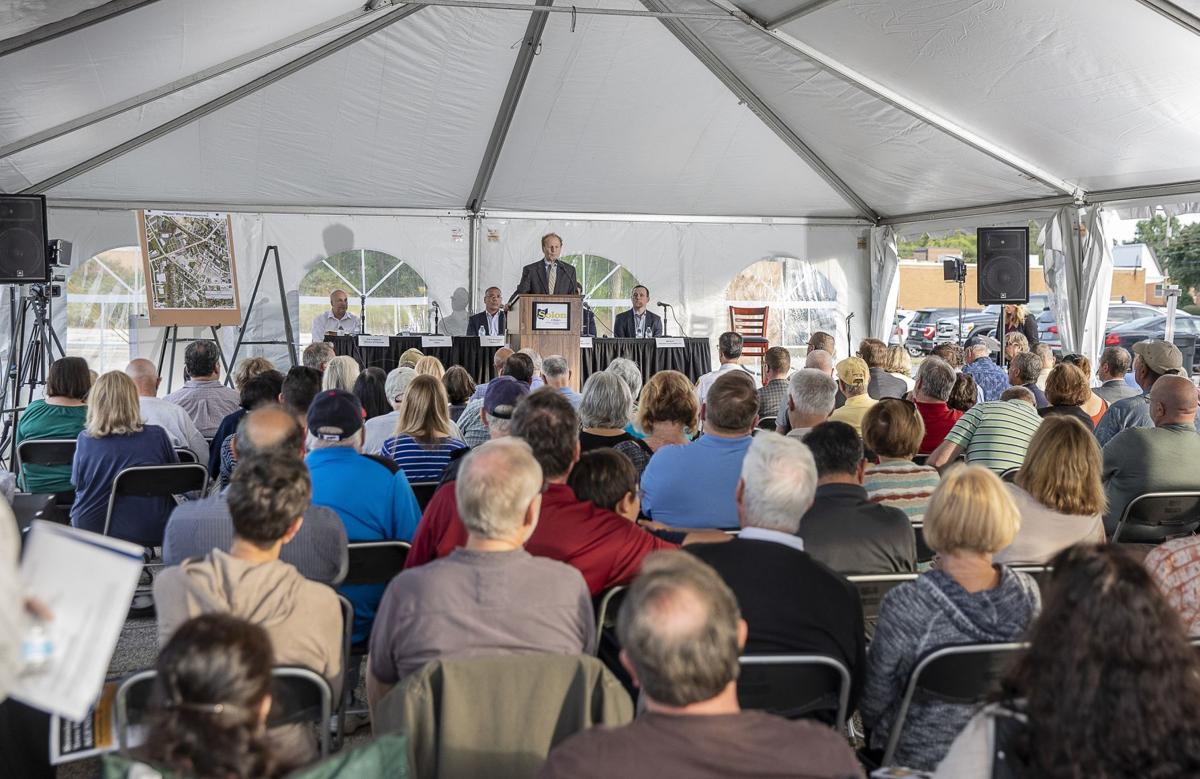 Solon Mayor Edward H. Kraus speaks to a crowd of more than 125 community residents last week when he called for the creation of a better downtown environment. Several panel members joined Mayor Kraus to discuss rezoning the former Liberty Ford site and surrounding land to allow for retail, restaurants, offices and residential housing. 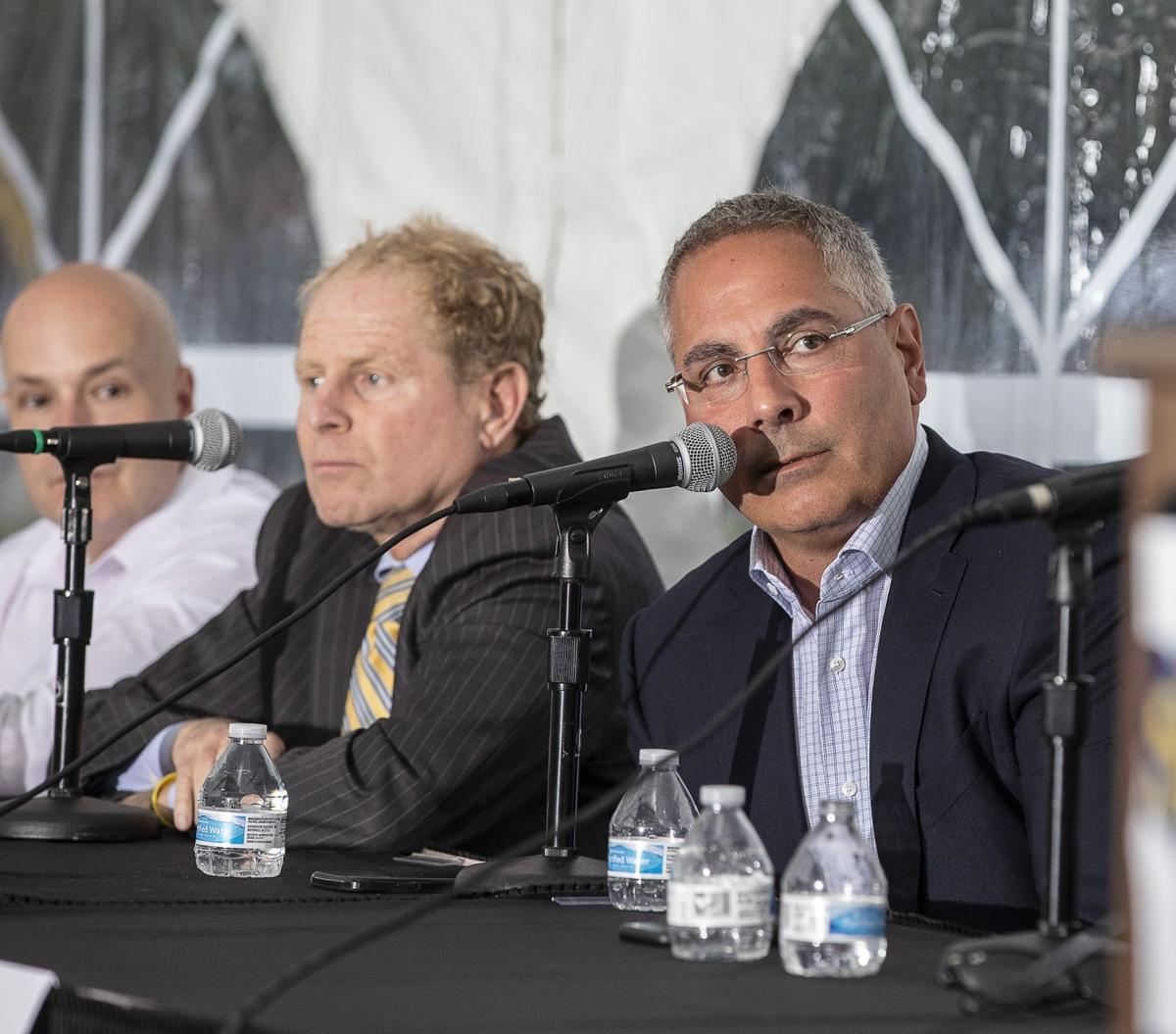 Christopher Semarjian, owner of Industrial Commercial Properties in Solon, calls attention to the absence of high-end restaurants and boutique hotels in the city. 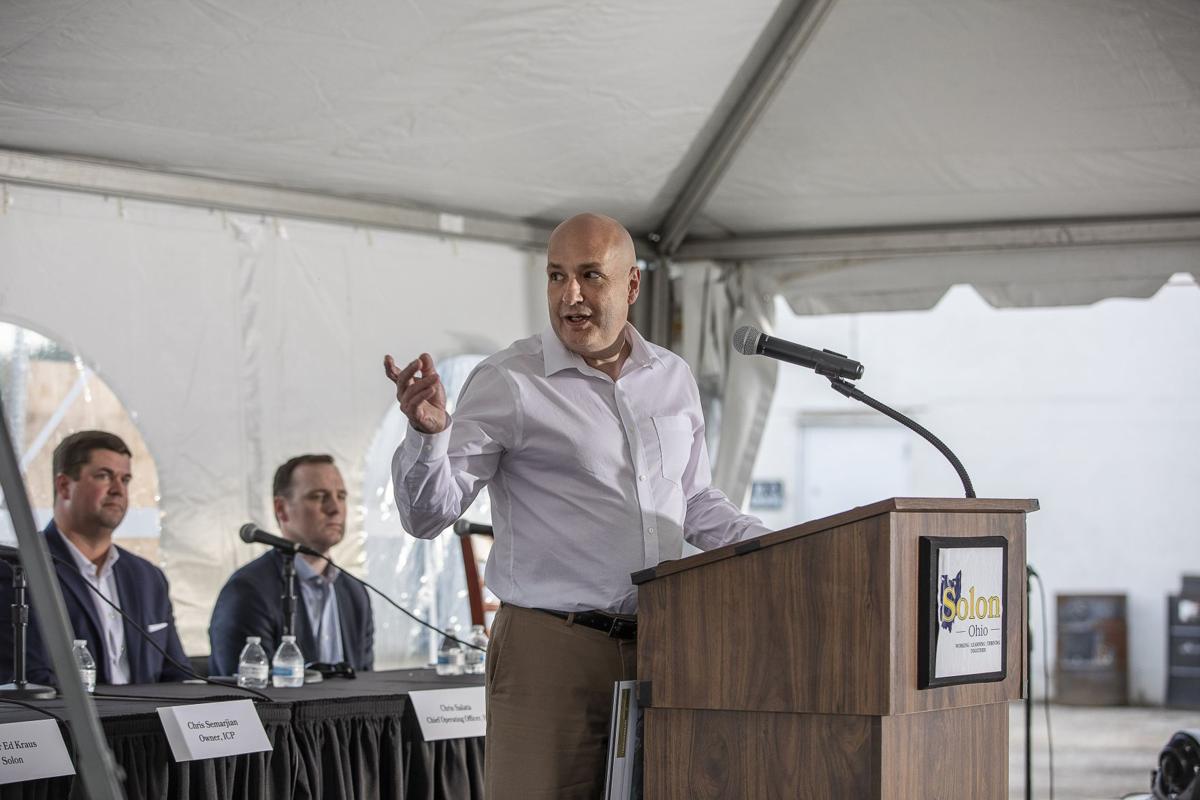 Solon Mayor Edward H. Kraus speaks to a crowd of more than 125 community residents last week when he called for the creation of a better downtown environment. Several panel members joined Mayor Kraus to discuss rezoning the former Liberty Ford site and surrounding land to allow for retail, restaurants, offices and residential housing.

Christopher Semarjian, owner of Industrial Commercial Properties in Solon, calls attention to the absence of high-end restaurants and boutique hotels in the city.

“It’s Solon’s time,” Mayor Edward H. Kraus said last week to the more than 125 in attendance at a town hall meeting on Issue 65, a rezoning of the former Liberty Ford site and surrounding area on the Nov. 5 ballot. The town hall session was held at the former auto dealership on Aurora Road.

“It’s crazy to think every other community in town gets it right, but us,” he said, referring to a lack of a real downtown area.

“We have the best school system, greatest tax base, some of the greatest businesses in the state and a beautiful housing stock, but we have the crappiest looking community on SOM Center and Aurora Road,” Mayor Kraus said. “I said to myself (when elected mayor) how do you change that and change the culture?”

Being more business friendly and saying “yes to businesses,” was one of the main ways, the mayor continued. “Our administration is a team to bring business in.”

The former Liberty Ford site and surrounding areas are not something the city can be proud of, he said.

“The C4 zoning is an antiquated zoning, and we need to change it to a modern world,” he said to a round of applause.

The mayor’s comments were part of those of a panel that addressed the proposed rezoning for the mixed-use planning district which covers the 21.76 acres of the former Liberty Ford site and all of the adjacent properties along Aurora Road, Station Street, Melbury Avenue and Solon Road.

The new zoning proposed would allow for a mixture of residential, commercial and office uses. Solon currently does not have this type of zoning.

“It’s a type of development people aspire to these days,” Panelist and City Planning Director Robert S. Frankland said, referencing areas like First and Main in Hudson and Pinecrest in Orange Village.

The current C-4 zoning of the Liberty Ford site allows for automotive uses such as gas stations and auto repair, not something one would expect in town centers, Mr. Frankland said. The surrounding acreage that is subject to the zone change is C-3 commercial.

If the zoning is approved, the current businesses would be able to operate as normal, Mr. Frankland said, but the rezoning allows for more types of businesses, opportunities and a more vibrant space for businesses’ existing and future customers.

Mr. Frankland added of the rezoning that it is a planned unit development type zoning. The specific plan that is ultimately approved by the Planning Commission and City Council becomes the actual zoning for the property, he added.

“It gives the city more control of the quality of the project,” Mr. Frankland said.

The proposed rezoning requires that at least 66 percent of the area will be commercial, while no less than 10 percent and no more than 33 percent be used for residential development.

“The number one goal of this city is to redevelop the downtown and provide housing for underserved markets,” Mr. Frankland said.

Mixed-using zoning could spark redevelopment of the vacant storefronts in Solon. “It has been the primary goal to redevelop this specific area for mixed use development,” he said.

Stephen Fine, owner of the Solon Square Shopping Center on Aurora Road where an Earth Fare was once located, was in attendance at the town hall meeting. His plaza is outside the proposed rezoning area. He said he came to get information more as a resident than a business owner.

“We are just a neighboring property,” he said. Mr. Fine declined to say if he was for or against Issue 65.

Among attendees included developer Yisrael Harris of BNH Enterprise Corp., who attempted to rezone his Bainbridge Road property to a mixed use development which was to included a winery restaurant and boutique hotel, among other uses, but was unsuccessful at the ballot last fall.

“Curiosity” drew him to the town hall meeting, the Beachwood resident said. “We want to know what’s going on,” he said. “It’s a good day for Solon.”

Mr. Harris said he has not yet decided the next step for his Bainbridge Road property, but as for Issue 65, “I don’t want to be political, but it’s a nice thing that is happening. It is nice to see it.”

Solon resident Paul Schnabel said he came to find out what is going on and stay informed.

Representatives of Industrial Commercial Properties, the Solon-based company that has a purchase agreement with the Liberty Ford property, spoke as part of the panel on their initial goals with the redevelopment, pending success Nov. 5.

“We’re shooting for high-end restaurants (as a starting point),” Bill Kern, executive vice president of ICP, said, “but we don’t have anything etched in stone.”

ICP Owner Christopher Semarjian said he loves having his business in Solon, but there are challenges to the location. “There are not that many restaurants in this city,” he said. “Hotels are growing, but still not keeping up with business demands in the community.”

He said there is a void in the city when it comes to high-end restaurants. Smaller boutique hotels would also be aimed for on the site, with 90-100 rooms maximum and more of a select service hotel, without a full service restaurant.

“In order to have a successful hotel and residential project, you are not going to be able to put in drive-thrus,” said Chris Salata, chief operating officer for ICP. “These will be higher-end restaurants, maybe a brewery.

“Higher-end restaurants will be targeted first as it is an unused market,” he said.

Mr. Semarjian also said there have not been new apartments built in Solon since the 1980s.

“If you don’t do it, someone will take your customers,” he said.

Mr. Semarjian said his company, which was also responsible for the purchase and redevelopment of the former Randall Park Mall to an Amazon Fulfillment Center, bringing in nearly 4,000 jobs, has spoken to large businesses in Solon like Swagelok and Nestle and they would be interested in a hotel for the area.

“They are excited about the community, especially considering the number of businesses,” Mr. Salata said of the conversations they have had thus far with hotel operators.

“I would hate to see this site sit through another cycle,” Mr. Semarjian said if nothing is done in the area. “It’s time to make something happen. Activity brings activity.”

Mr. Semarjian also said he does not believe the development would have any negative impact on residential homeowners in the area.

“When good development comes in, everyone wants to make theirs better,” he said. “It’s all positive.”

The residential component of the plan allows for up to 200 units, the majority of which are planned as one bedroom apartments, Mr. Salata said. Rents would begin at about $1,500 a month, and go up to as high as $2,500-$3,000 depending if two bedroom units are peppered in.

“If you are concerned people will be renting their way into the school district, go back to the design,” Mr. Salata said. One bedroom units planned to measure about 850 square feet, will be a lot more difficult for families to occupy and send their children to the schools.

“You can probably rent a home cheaper in Solon than our apartments,” Mr. Semarjian added.

Candidly, Mr. Semarjian added, developers had hoped for the allowance of 300 units, but the city said “no way,” he said.

Solon resident Alice Haas said she was not happy about the apartment component of the plan. “I think this is a family community, and we don’t need (more) apartments. We already have apartments.”

As far as parking, Mr. Salata said there will be demand for spots at different times of the day, “but there will be ample parking and we feel we can do it without an additional deck.

“It’s all about how we can design it.”

He also said there will be common areas to provide for a sense of community.

“Having the flexibility of design will help us incorporate a number of (common) spaces,” Mr. Salata, the lead project executive for Pinecrest, said. “We will strive to include as many public places as we can.”

The Town Hall also included a question and answer portion, with questions being submitted on a piece of paper and read aloud by Angee Shaker, director of business and marketing for the city.

One of the questions centered on the Solon Motel, on the corner of Aurora and Solon roads, and how it fits into the overall plan.

“We like a good challenge,” Mr. Semarjian said. “We would love to get the motel. If it becomes a part of the plan, that’s great, but I think we can pull it off without it.

“Hopefully when we execute our plan, that will raise the bar one way or another – raze the building or the bar,” Mr. Semarjian said.

“It’s kind of sad that the postcard of the city is the motel,” Mayor Kraus added. “That is going to change. That much I can guarantee one way or another.”

The panel was also asked about the traffic impact of the project.

“It will definitely be more crowded than it is today,” Mr. Salata said, “but candidly, Solon is an active area and it is already a busy intersection.

“I think traffic will increase, but it will be properly planned with good ingress and egress.”

Some attendees also asked what will happen if the rezoning is unsuccessful at the ballot?

“We would probably renovate the existing building,” Mr. Semarjian added, “in some shape or form. It will be a challenge.

Mayor Kraus said this is as close as Solon will get to a true downtown area.

“You better embrace these opportunities as they don’t come around often,” Mayor Kraus said. “Very rarely do you get a group like this (ICP). When they say they are going to do something, they actually do it.”