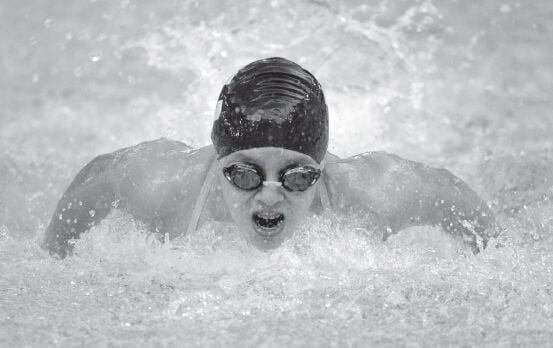 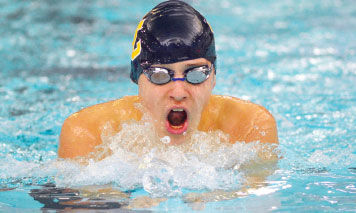 Solon senior Isaac Shaker swims the breaststroke leg of his 200-yard individual medley during a home dual against Mayfield on Monday evening. 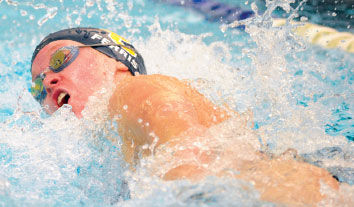 Solon senior Isaac Shaker swims the breaststroke leg of his 200-yard individual medley during a home dual against Mayfield on Monday evening.

The Solon boys cruised, while the Solon girls left little doubt behind the depth of their young talent during a swimming-and-diving dual against Mayfield on Monday evening at their home natatorium.

Featured by a trio of double-event winners, including seniors Ryan Gross and Isaac Shaker and junior Victor Perez Reyes, the Comets swept the board with victories in every race, as well as the 1-meter diving competition, to rout Mayfield, 144-31.

And the Lady Comets took care of business, 183-129, by claiming gold in four of the nine individual events and two of the three relays. Scoring eight lanes at their home pool worked to the Solon girls’ advantage with second- and third-tier points adding up – most high school pools only have six lanes.

Perlberg won the 200-yard individual medley in 2:14.00, besting Mayfield senior Gianna Leffler, 2:18.18, and teammate Jones, 2:21.46. While it was a season opener, Perlberg’s performance was faster than any Lady Comet who swam that event last season, according to the Northeast District honor roll on swimmeet.com.

Fried won the 50 freestyle in 26.83 seconds, while freshman teammate Grace Chen was runner-up in 28.36 seconds.

And Wilkov captured the 1-meter springboard competition with a six-dive score of 237.1 points, while senior teammates Kaia Kanj, 170.6, and Lydia Poduska, 169.45, supplied a one-two-three finish for the Lady Comets.

Although the Mayfield girls had a slight edge with five individual victories, Solon cleaned up with advantages in runner-up finishes, 7-2, and third-place finishes, 6-3, for those previously mentioned second- and third-tier points.

In the 100 backstroke, Perlberg was runner-up in 1:00.50 and Fried took third in 1:05.12, as they were bested only by Mayfield senior Gianna Leffler’s triumph in 1:00.14. Leffler was an automatic state qualifier in that event last season.

Perlberg’s effort on Monday was just 0.04 second off her best time from a year ago, while Fried bested her district performance in that event from last season.

In the 100 freestyle, Solon senior Alexis DiMatteo was runner-up in 59.55 seconds, while senior teammate Rilie Szach took third in 1:04.98, as they were bested only by Mayfield freshman Lauren Furnas’ triumph in 57.47 seconds.

Mayfield’s Furnas also won gold in the 100 breaststroke in 1:13.36, squeaking out a victory against Solon’s Grace Chen’s runner-up performance in 1:14.24.

And in the 500 freestyle, Solon sophomore Ava Shaker took second in 5:45.18, while sophomore teammate Kate Molyneaux was third in 5:48.32, as they were bested only by Mayfield senior Charlotte Hantus’ victory in 5:30.52.

The Solon girls also won the 200 freestyle relay with the team of Grace Chen, Jones, Molyneaux and junior Bridget Ferris clocking a 1:49.18 to edge the Lady Comets’ “B” relay team by 0.54 second.

Not only did the Solon boys streamline to a team victory, but the Comets went one-two in eight of the nine individual events against a depleted Mayfield squad that only had one or two bodies in most races.

Gross won the 200 freestyle in 1:53.00, while junior teammate Blake Ellman was runner-up in 1:55.94. Gross was on cruise control after clocking a 1:48.30 during district competition last season.

Shaker also took care of business in the 100 freestyle in 51.34 seconds, while senior teammates Clay Bozsvai, 56.96 seconds, and Zach Hall, 57.02 seconds, provided another one-two-three sweep for the Comets.

Perez Reyes won the 100 butterfly in 58.67 seconds, edging Zampogna, 58.72 seconds, while Solon freshman Andrew Indradjaja took third in 1:01.72 for yet another Comet trifecta.

And in the boys 1-meter springboard competition, Solon freshman Dominic Roberto took the top prize with a six-dive score of 272.25 points, while junior teammate Patrick Burke was runner-up with 251.8 points.

Roberto, who grew up training in the American Flyers Diving club, was a national platform champion when he was 10 years old. Burke, meanwhile, is returning on the heels of a Division I state podium finish from last season.

In the 200 medley, the Comets’ quartet of backstroker Indradjaja, breaststroker Perez Reyes, butterflier Shaker and freestyle Yazhbin clocked a triumphant 1:49.46.

And in the 400 freestyle relay, Solon’s team of Gross, Ellman, Indradjaja and Yazhbin took first in 3:40.78.

Up next, Solon is scheduled to host the Greater Cleveland Conference meet, with diving competition taking place at 6 p.m. Jan. 7 and the swimming portion of the meet starting at 1 p.m. Jan. 9.