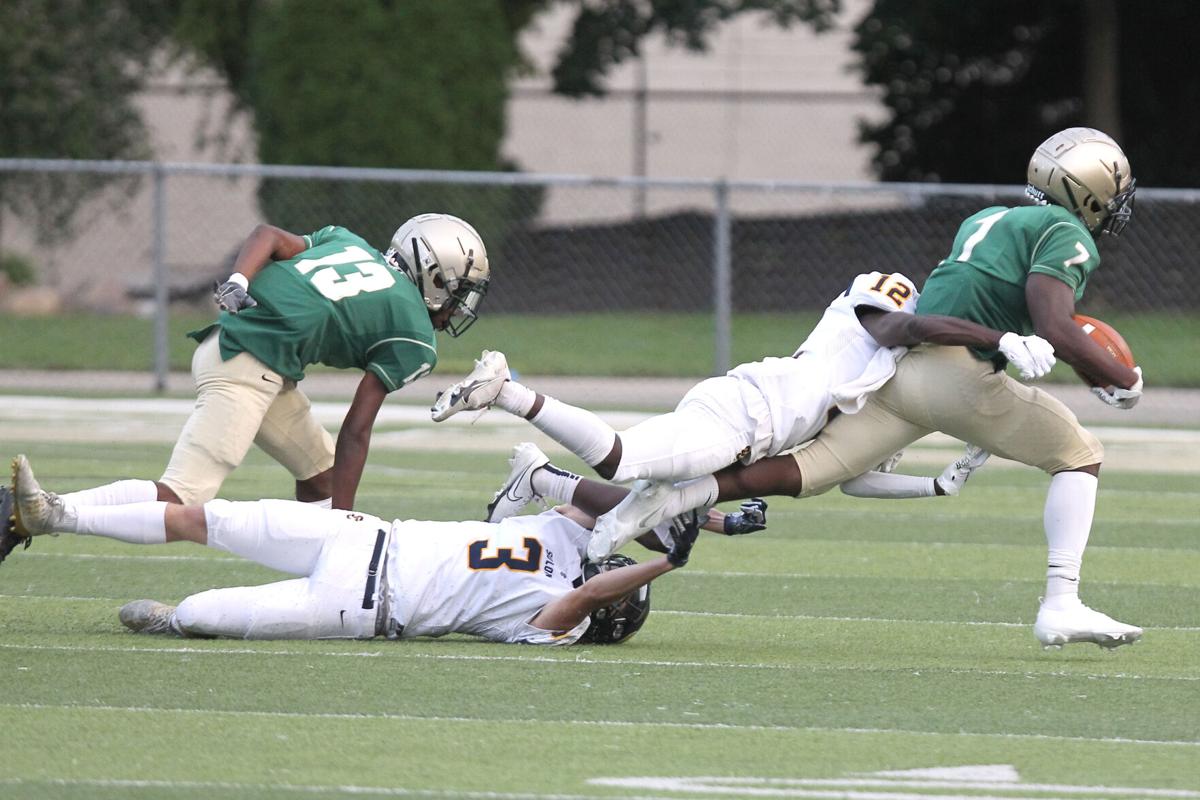 Solon senior defensive back Logan Cingel (No. 3) and sophomore defensive back Joel Kpassou (No. 12) work to bring down St. Vincent-St. Mary senior Darrian Lewis during the Comets’ 28-7 road loss in their season debut last Thursday at Green Street Stadium in Akron. 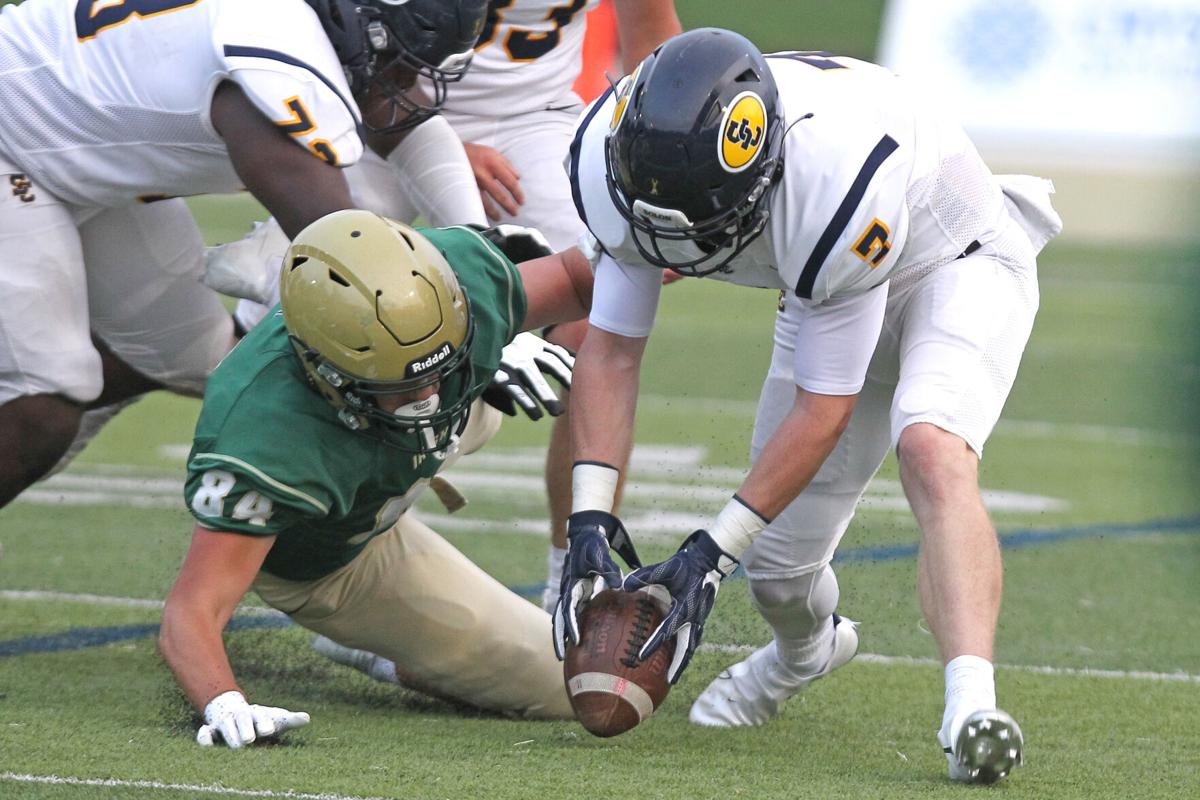 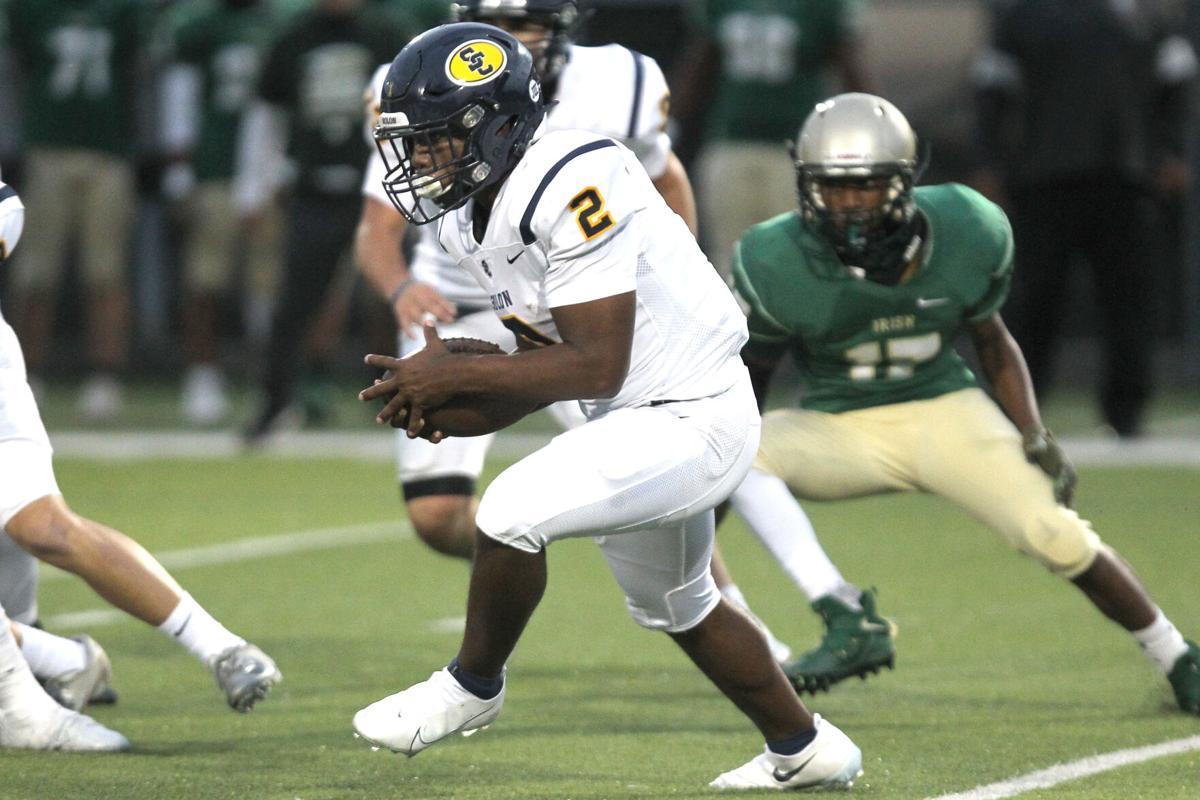 Solon senior defensive back Logan Cingel (No. 3) and sophomore defensive back Joel Kpassou (No. 12) work to bring down St. Vincent-St. Mary senior Darrian Lewis during the Comets’ 28-7 road loss in their season debut last Thursday at Green Street Stadium in Akron.

Despite jumping through all the hoops just to get back on the gridiron, it was almost like the Solon gridders never skipped a beat when they made their season debut against state-ranked St. Vincent-St. Mary last Thursday in Akron.

Well, at least at first it appeared that way.

Then Solon’s offense drove down the field and scored on its opening series with a 22-yard touchdown toss from third-year starter Pat McQuaide to 5-foot-9 sophomore receiver Joel Kpassou. Senior kicker Justin Covey connected on the extra point in his first varsity game, and the Comets took a 7-0 advantage with 4:31 remaining in the opening frame.

Representing a Division I playoff perennial program, the Solon boys couldn’t have drawn up a better start in their first game against the Division III AP No. 12-ranked Fighting Irish (3-1), who already had three games under their belts.

But those two series were the highlights of the night for the Solon gridders (0-1), who had to bear the brunt of a 28-7 road loss against the more experienced Irish at Green Street Stadium.

“Well, it’s factual that we’re behind, but we are able to finally now get on the same level with people as far as actually playing a game, and now we’ve got to catch up,” Solon 18th-year head coach Jim McQuaide said.

“So, there’s a lot of things that we can do better as coaches and players,” he said. “That’s what happens in the preseason. Now we know and can spend a lot of time evaluating things we can do better. And now we’ve got to really get to work to try to shore those things up, because this Friday we have a phenomenal program coming to play, and there’s a lot of things we have to do better so that we can continue to make progress in a very different kind of season.”

Solon originally had a void in its schedule for week five, but the Comets agreed on Sept. 15 to host the Division V AP No. 1-ranked Kirtland Hornets (4-0) at 7 p.m. Friday at Stewart Field. The two programs have not collided since 1948, when Solon was the 31-0 victor.

But that was before 15th-year head coach Tiger LaVerde took over at Kirtland and created a dynasty that includes a 178-17 record at the helm, four state championships and three state runner-up campaigns. The Hornets are currently on a 34-game win streak, including a 35-10 victory against Division I Shaker Heights (1-2) earlier this month.

“Coach LaVerde and his staff, they’re tremendous coaches,” McQuaide said. “They have a really good program that they’ve built over many years, tremendous support from their community, and I think you would try to hope people would say the same thing about us.

“So now it’s just two good teams, two good programs that respect each other a great deal that are in this different kind of a season; let’s play.”

Like McQuaide said, if Solon wants to compete well against a small-school juggernaut this week, the Comets must build upon their performance against St. Vincent.

After taking a 7-0 advantage, Solon was hoping to get its defense off the field thanks to 210-pound junior linebacker Jakob Oldenburg putting a sack on St. Vincent 6-foot sophomore quarterback Nathan Lenz. But Lenz got back up and completed a 31-yard toss on third-and-long to keep the Fighting Irish drive alive.

A few plays later, 210-pound junior running back George Linberger scored a 1-yard touchdown to tie the game, 7-7, with 9:58 to go in the half.

St. Vincent 190-pound senior running back Josh Nickerson capitalized on a 1-yard touchdown for a 14-7 Irish advantage with 6:21 left in the half.

Solon’s offense then got back to business with a trip to the red zone, but the Comets turned the pigskin over on downs at the St. Vincent 10.

“We did some good things,” coach McQuaide said. “The first drive of the season, we drove about 70 yards to score a touchdown, but then we had some situations where we were inside the 50 and we weren’t able to sustain drives.

“We had a drive where we had moved the ball down to their 16-yard line and were first-and-10 and weren’t able to capitalize on that. So, that all goes down to the individual techniques of every guy’s position. If we can continue to get better at what each of us are doing, then as a whole we’ll play much better also.”

Quarterback McQuaide, who is playing two-way football as a starting safety this year, turned around and collected an interception of his own and returned it to midfield to make sure it remained a one-possession game at halftime.

But St. Vincent’s Nickerson put the Comets away with two more touchdowns after the break – an 11-yard score in the third quarter and then an 81-yard jaunt in the fourth, when he broke three tackles from each tier of Solon’s defense for the eventual 28-7 final.

McQuaide was 12-of-22 passing for 89 yards, with six completions going to Kpassou for 36 yards, while 205-pound senior running back Khalil Eichelberger, a third-year starter, had 14 carries for 91 yards, as well as three catches for 27 yards.

“You don’t really know what you have until you actually go against someone else, and then you’re just able to totally scour that film and evaluate what you have to do to get better,” coach McQuaide said. “So, we needed to play, because that’s the only way we can totally and completely evaluate ourselves.

“Was the result what we wanted? No, of course not. But it gave us a great evaluation against a quality opponent.”

While the Ohio High School Athletic Association planned for a six-week regular season and an all-inclusive playoff format this fall, the state organization announced new regional alignments Sunday for the 664 schools that have opted in for the postseason. There are 45 member schools with 11-man football programs that have opted out.

But with only 16 teams in Division I, Region 1 – where Solon lies – all 16 teams get a first-round bye. In other divisions, most regions have around 25 teams.

That means Solon now has the luxury of scheduling a fourth regular season game during the bye week on Oct. 9, if the Comets can get an opponent. With Solon missing the first three weeks, an extra 48 minutes of experience could go a long way in getting playoff ready.