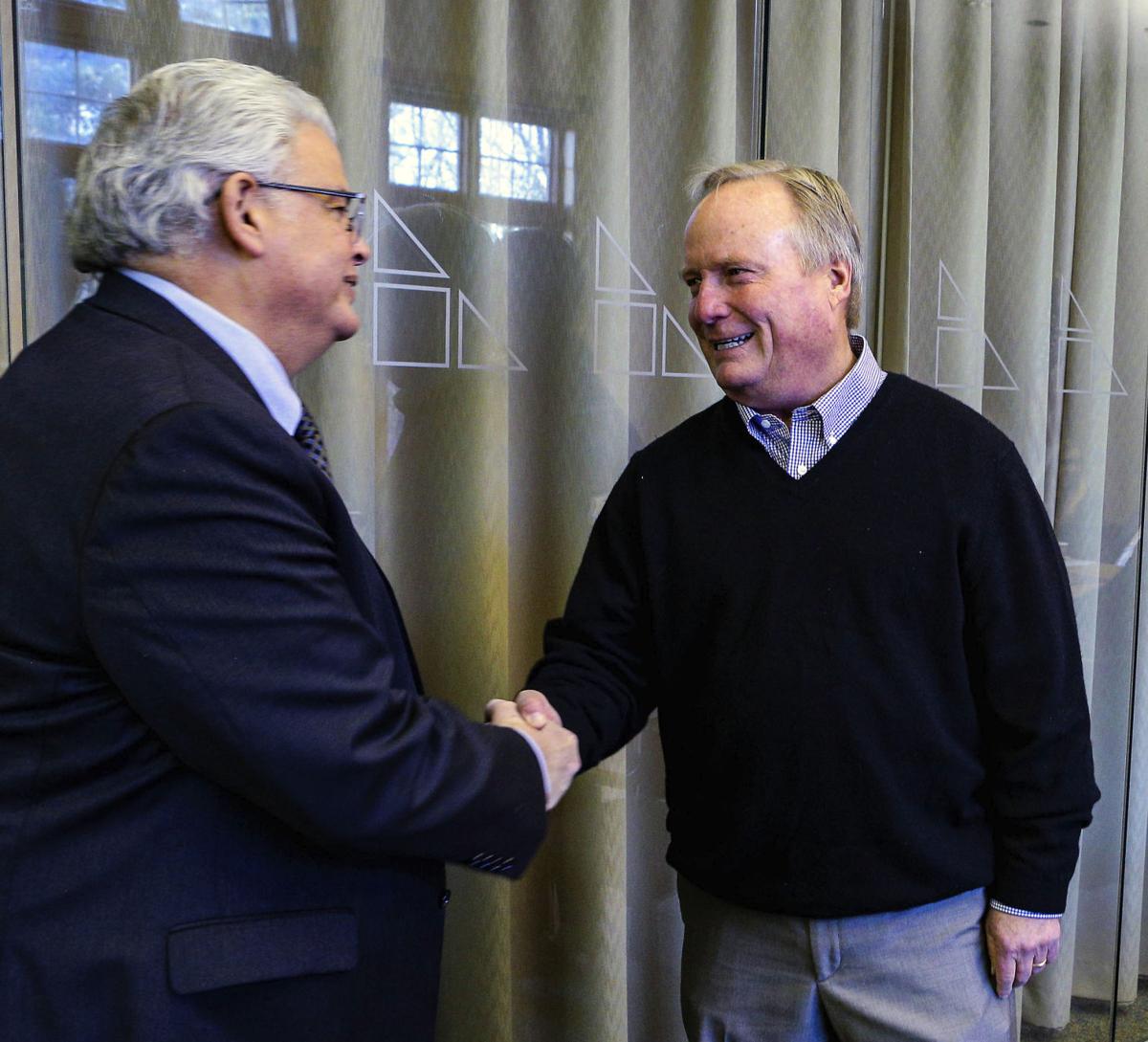 U.S. Rep. David Joyce, right, speaks to David J. Favorite, executive director of the Geauga County Department of Development, during a roundtable discussion dedicated to infrastructure and presented at Solon City Hall last week. The event included leaders from all over Northeast Ohio. 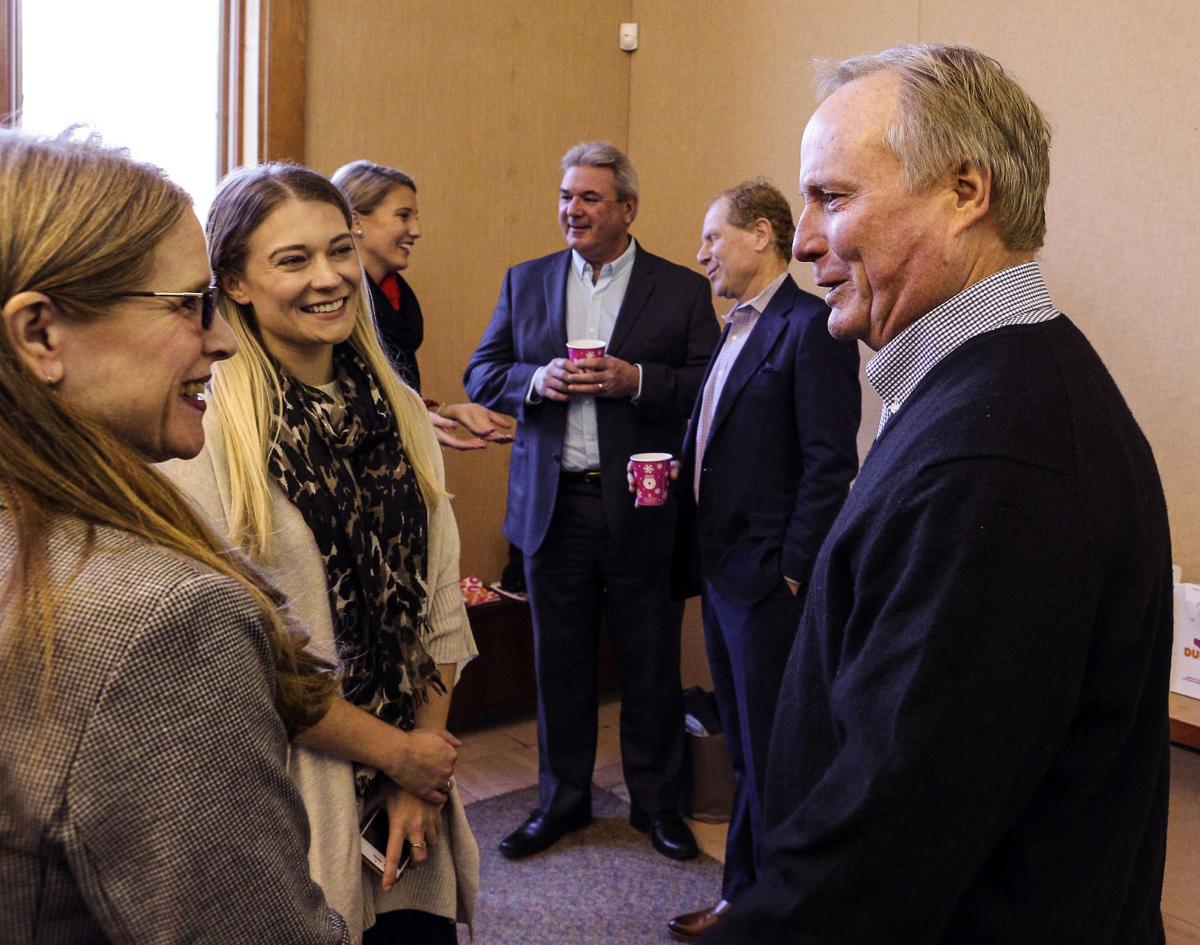 U.S. Rep. Dave Joyce, R-Bainbridge, welcomes area leaders to a roundtable discussion last week at Solon City Hall where roads and bridges for the regional was explored. The discuss included input from representatives from the Northeast Ohio Areawide Coordinating Agency, Ohio Department of Transportation and Team NEO, as well as engineers from surrounding areas and Mayor Edward H. Kraus.

U.S. Rep. David Joyce, right, speaks to David J. Favorite, executive director of the Geauga County Department of Development, during a roundtable discussion dedicated to infrastructure and presented at Solon City Hall last week. The event included leaders from all over Northeast Ohio.

U.S. Rep. Dave Joyce, R-Bainbridge, welcomes area leaders to a roundtable discussion last week at Solon City Hall where roads and bridges for the regional was explored. The discuss included input from representatives from the Northeast Ohio Areawide Coordinating Agency, Ohio Department of Transportation and Team NEO, as well as engineers from surrounding areas and Mayor Edward H. Kraus.

Transportation concerns for Northeast Ohio communities were discussed during a roundtable last week when U.S. Rep. Dave Joyce met with leaders from across the region at Solon City Hall.

In opening the roundtable, NOACA Executive Director Grace Gallucci thanked the congressman for taking a leadership role when it comes to transportation and infrastructure issues affecting local municipalities.

Rep. Joyce, R-Bainbridge, serves the 14th congressional district of Ohio, including all of Ashtabula, Lake and Geauga counties as well as eastern Cuyahoga County, northern Trumbull and Portage counties and northeastern Summit County.

“It’s great to have a congressman who not only listens but works hard to get done what we need to have done,” Ms. Gallucci said.

“I represent all of you,” Mr. Joyce said to those in attendance.

Mr. Joyce began by sharing information on the Fixing America’s Surface Transportation or FAST Act set to expire in September of 2020. This funding and authorization law, enacted in 2015, governs federal surface transportation policy and spending.

A reauthorization bill was recently approved by the Senate Committee on Environment and Public Works, the congressman explained, but still needs approval by the Senate Commerce, Banking and Finance committees before going to the full Senate for a vote.

It is important to make sure needs in Northeast Ohio are covered, Mr. Joyce said.

“The same thing that is important to the congressman relative to transportation has the same importance to NOACA — ensuring we have safe and affordable transportation,” Ms. Gallucci said.

Funding is an issue, she continued. “We have not had a gas tax increase since 1993.”

From a Cuyahoga County perspective, Engineer Dave Marquard said there are concerns about major bridge construction.

“There are 209 bridges we are responsible for, including six major bridges,” he said. Bridges under construction currently are in the range of $50 million. That includes the Harvard Road bridge, which is a historical structure.

“There will be others that need work,” he said. County bridges are primarily funded through the County Engineer’s Association, but that program has restrictions on the amount that can be received over a certain time period.

“We have maxed out that resource,” Mr. Marquard said.

Of the 17 major bridges in District 12, six of them are safe to drive on but deemed deficient and are in need of some type of structural work.

“There’s definitely a need,” ODOT District Deputy Director John Picuri said. “I agree that the bridges, especially in Northern Ohio, are a problem.”

“Yes they are,” Mr. Joyce concurred.

James Gills, Lake County Engineer, said that although Lake County is the smallest county in the state, the roads are highly traveled. For example, State Route 2 gets 90,000 cars a day, he said. Bridges are also a challenge.

Ms. Gallucci said one of the challenges is the balance between maintenance and capacity.

“Do we spend funds on maintaining what we have or widening roads?” she said.

In explaining transportation challenges facing the City of Solon, Mayor Kraus said one of the struggles is worker mobility.

“We have a huge job hub,” the mayor said of Solon’s approximately 900 businesses, “and manufacturing is on the uptick, but one of the struggles is getting people to work.”

Solon has about 32,000 employees, many of whom work varying shifts throughout the day and into the night.

“Not everyone has a car,” Mayor Kraus said, “and public transit is stretched to the limit.

“It might be an opportunity to look at a public-private partnerships in public transit,” he said.

Team NEO Vice President Christine Nelson said in working with businesses, access to the work force is an issue, as is reliability of their truck traffic, “having sustainable routes they can count on.

Ms. Gallucci said truck traffic is expected to quadruple in the next 20-30 years.

Some Geauga County businesses are providing their own transportation to employees to get them to the work sites, said David J. Favorite, executive director of the Geauga County Department of Development.

“We don’t have major north south highways, and that is a challenge for our companies and an impediment,” he said.

“Throughout the district, workforce is an issue,” Rep. Joyce said. “Companies can’t get enough employees.” Many won’t put on a third shift or invest in equipment unless they have the employees, he said.

India Birdsong, the newly appointed executive director of the Greater Cleveland Regional Transit Authority, said many of the problems are not new.

“This is a golden opportunity to have the private partnerships, to be able to talk about how to transport individuals to the communities,” she said. She said RTA must have the commitment from private partners in terms of riders “to make it justifiable to put the service out.”

She said RTA already does these types of services for such things as Cleveland Browns and Cleveland Indians games, “so why can’t we invest back into the community? That is more important than a special event.

“You have to have the dollars behind it to make it sustainable,” she continued. “There is a lot that needs to be done. But the commitment has to be there on the front end so we can make sure it is sustainable on the back end.”

The problem in Northeast Ohio with public transit, Ms. Gallucci continued, is that “we don’t have enough density in job hub areas or urban areas to make it cost efficient.” Even New York City subsidizes their system by 30 percent.

“Public transit is expensive,” Ms. Gallucci said. “And if it really does move lots of people then that’s great, but how do we ensure where we are investing funds that we can deliver on the density?

With public transit, there is a local, state and federal component, just like with roads and bridges, Ms. Gallucci said.

“How do we better incentivize the state government to participate?” she asked. “Can we do something at the federal level?”

“We are pioneers in the rail industry for the rust belt area,” Ms. Birdsong said. “We owe our system and community time to brainstorm. The quicker we can come to that solution, that will be the better use of our time for everybody.”

“Do you have the ability for public/private partnership?” Mr. Joyce asked Ms. Birdsong. “Can you work with Solon to specify routes to target areas?”

“We can look at that,” she responded.

Ms. Gallucci added that many private sector companies do not consider public transit their responsibility.

“When you put the burden back on them to fund it, it doesn’t work,” she said.

Mr. Picuri said of other issues that many local communities won’t even apply for federal grants for infrastructure due to the fact that it costs as much as 40 percent more to do the engineering for a local project, and therefore it is not cost effective.

“I appreciate what you are saying, and I share your frustration with regulations,” Rep. Joyce said. “I know you have heard it enough that the federal government is here to help, but we truly are.”