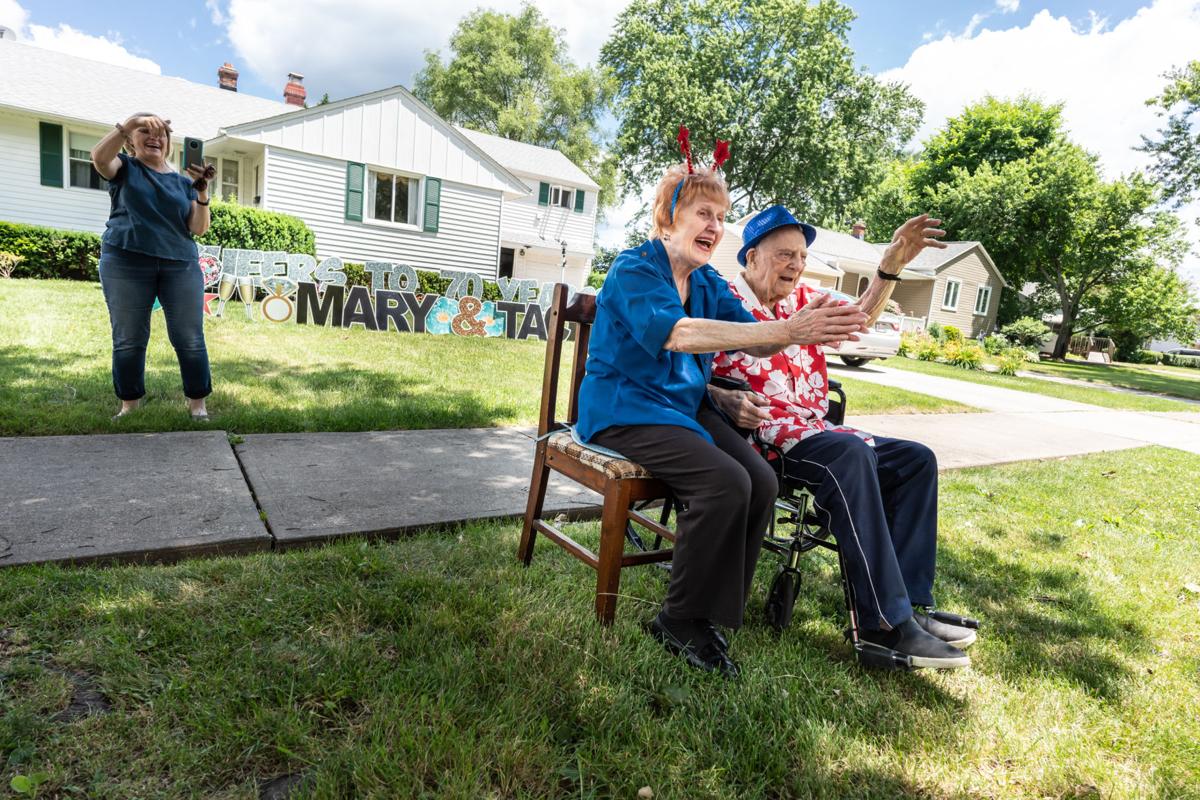 Mary, 92, and Hilary Tachovsky, 94,a longtime married couple, sit outside their Baldwin Road home and wave to well-wishers from their front yard. The committed duo marked their anniversary last week on July 1, celebrating 70 years of marriage, friendship and family. 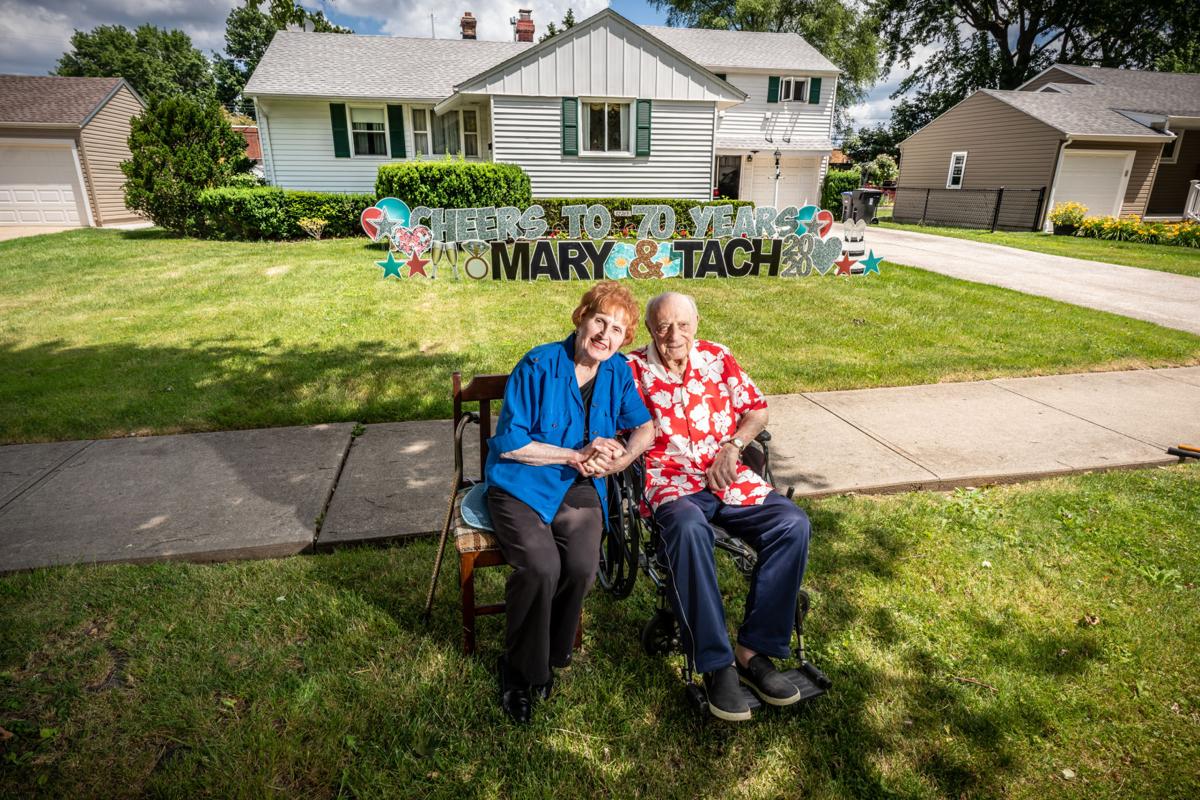 Mary and Hilary Tachovsky say the key to their successful 70 years of marriage is to “take the good and bad as they come” and “have love and respect for each other.”

Mary, 92, and Hilary Tachovsky, 94,a longtime married couple, sit outside their Baldwin Road home and wave to well-wishers from their front yard. The committed duo marked their anniversary last week on July 1, celebrating 70 years of marriage, friendship and family.

Mary and Hilary Tachovsky say the key to their successful 70 years of marriage is to “take the good and bad as they come” and “have love and respect for each other.”

But this wasn’t your everyday milestone.

The day marked 70 years of friendship, togetherness and unwavering commitment.

Married July 1, 1950, the couple, who are in tandem as they move about their Solon home, where they have lived since 1955, share loving nicknames, as well as a lifetime rooted in faith and family.

In fact, that is among the advice they would give young couples today, they said matter-of-factly.

“You take the good and bad as they come, Mr. Tachovsky, 94, said. “But she was number one always.”

The couple also refrained from a lot of angry words at one another through the years, Mrs. Tachovsky, 92, said of their secret to a happy marriage. “We didn’t get angry at each other too much.

“You just have to have love and respect for each other and you have to keep moving, and keep active,” Mrs. Tachovsky said. “You can’t tear somebody apart. We never had that where we criticized each other for things.”

The couple have been active both at the Solon Senior Center as well as at St. Rita Church, the parish right across the street from their Baldwin Road home that they have been members for 65 years. They have chaired everything from campaigns to dances at the church and have been active volunteers throughout their married life.

They first met at a friend’s wedding, where they were both members of the bridal party.

“The girls were flirting with him,” Mrs. Tachovsky recalled. “I didn’t want him to kiss me so I played hard to get.

“I think that’s how I got him,” she said with a laugh.

Mr. Tachovsky said his future wife grew on him, and he began liking her more and more each day.

“She has that little spunk,” he said with a sparkle in his eye, “and she is active.”

Mrs. Tachovsky said her first impression after seeing him walking down the Madison Avenue in Lakewood in a turtleneck with a cigarette in his mouth was that he was quite the tough guy.

They were engaged and married a year later, and said they never knew at the time they would be married as long as they have.

After the third of their four children were born, Mr. Tachovsky quit smoking and has enjoyed good health until recent heart issues. He walks with an aid of a walker in their home, while Mrs. Tachovsky lovingly calls him “Tach” as they go about their day.

In total, the couple have four children, 10 grandchildren and 11 great-grandchildren. Many were on hand this past Saturday at their anniversary party, which included a luncheon at Burntwood Tavern in Solon, Mass at St. Rita Catholic Church followed by dessert at the Tachovsky’s home.

In addition, the Tachovskys were surprised earlier in the week with a drive-by tribute of about 30 cars, including friends throughout the community. Their friends at the Solon Senior Center all signed a card that they proudly displayed on their dining room table.

“Family is very important to us,” Mrs. Tachovsky noted. The couple have proudly raised a close-knit family, they said, and have always taught their children to do the right thing as well as be community conscious.

Mrs. Tachovsky still drives and they go out to dinner from time to time.

After their kids were grown, they enjoyed traveling to such locations as California and Hawaii.

Today, because of Mr. Tachovsky’s heart issues, his wife spends much of her time keeping track of his weight and medications, but they always find time to enjoy lunch together.

“We have little enjoyments,” she said.

“All I can say is, I always felt like I looked forward to getting home after work and doing things,” Mr. Tachovsky said, reflecting on his marriage.

“It has worked, and we have worked at it,” Mrs. Tachovsky added. “We have put up with each other’s differences because we are not the same. But it has been amazing.”

Her husband has always been great with sending cards through the years, Mrs. Tachovsky said, all of which she keeps in a box of mementos.

“This guy is terrific with cards,” Mrs. Tachovsky said. “I have a whole big box over the years. They are just beautiful.

“He was the card person and still is to this day.”

The couple is known to hold hands and share a kiss.

They also laugh together, especially about her cooking.

“I’m not so much a cook anymore,” Mrs. Tachovsky said with a laugh. “I forgot how and am a terrible cook.”

“She has always been wonderful and cared about me and took care of me whenever I was sick,” Mr. Tachovsky added. “She’s a wonderful woman.”

His wife also keeps such a nice home, he said.

Both say it has not always been easy through the years. Mr. Tachovsky, who served in the U.S. Navy, worked in engineering and Mrs. Tachovsky in accounting.

“There have been a lot of ups and downs, and it hasn’t been easy, but we are from the Depression era so we have learned to accept things,” Mrs. Tachovsky said. That included deaths of family members or divorce. Their daughter-in-law died at 52 of cancer.

Both came from parents who enjoyed long marriages. Mrs. Tachovsky said they never thought of divorce through the years.

“Our whole marriage has been centered on the word of God and the church has been so important to us,” she said. “That is what has held us together — our faith.”

“You have to love and respect each other,” Mr. Tachovsky added, noting that in recent months he wonders if he will wake up in the morning.

The two start each morning with a loving embrace. Both said they were proud to have reached the 70-year milestone.

“It’s been a blessing to get to this point,” Mrs. Tachovsky said.