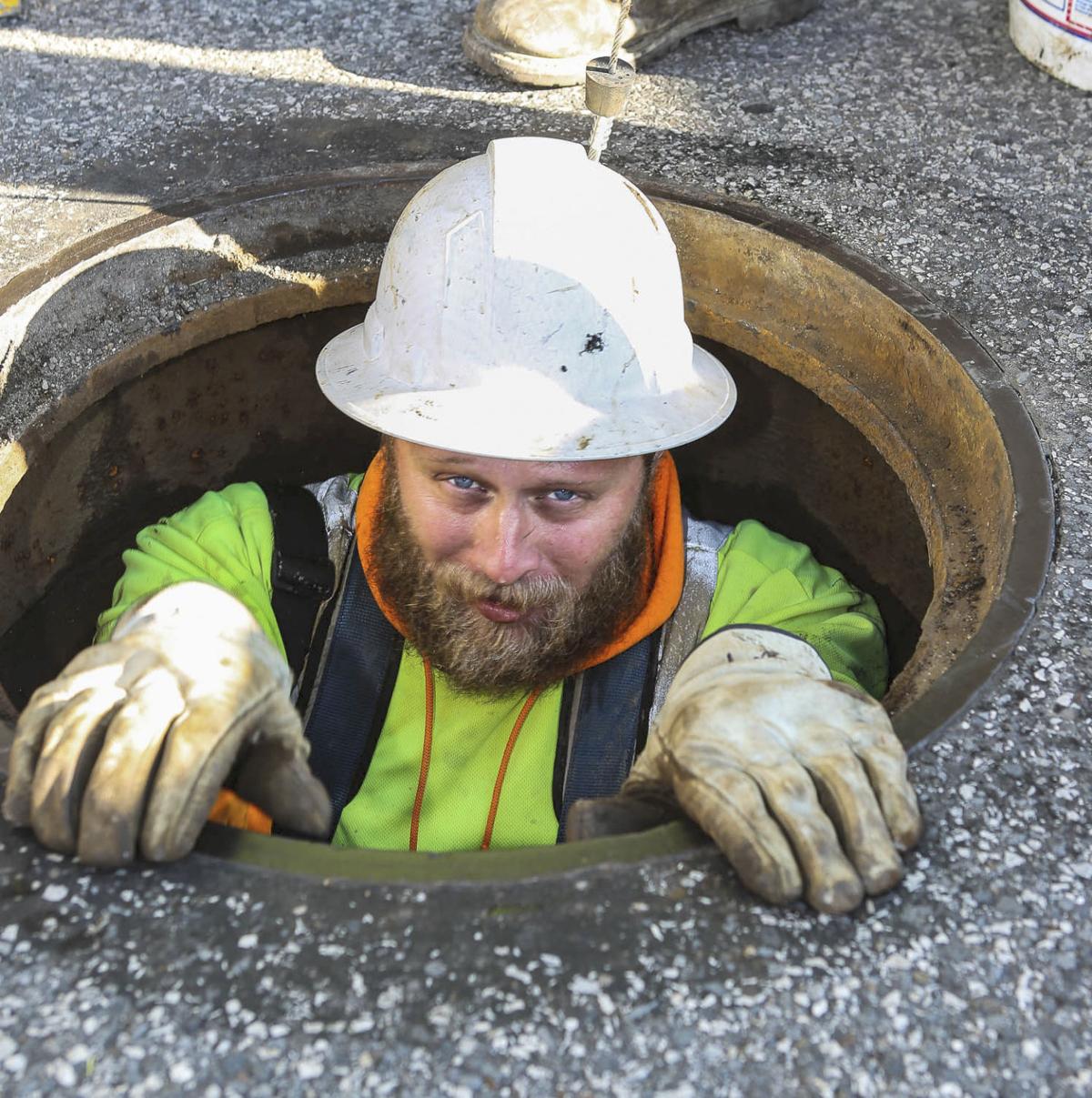 Mr. Dekome emerges from below ground to sunlight and fresh air after completing his task below ground. 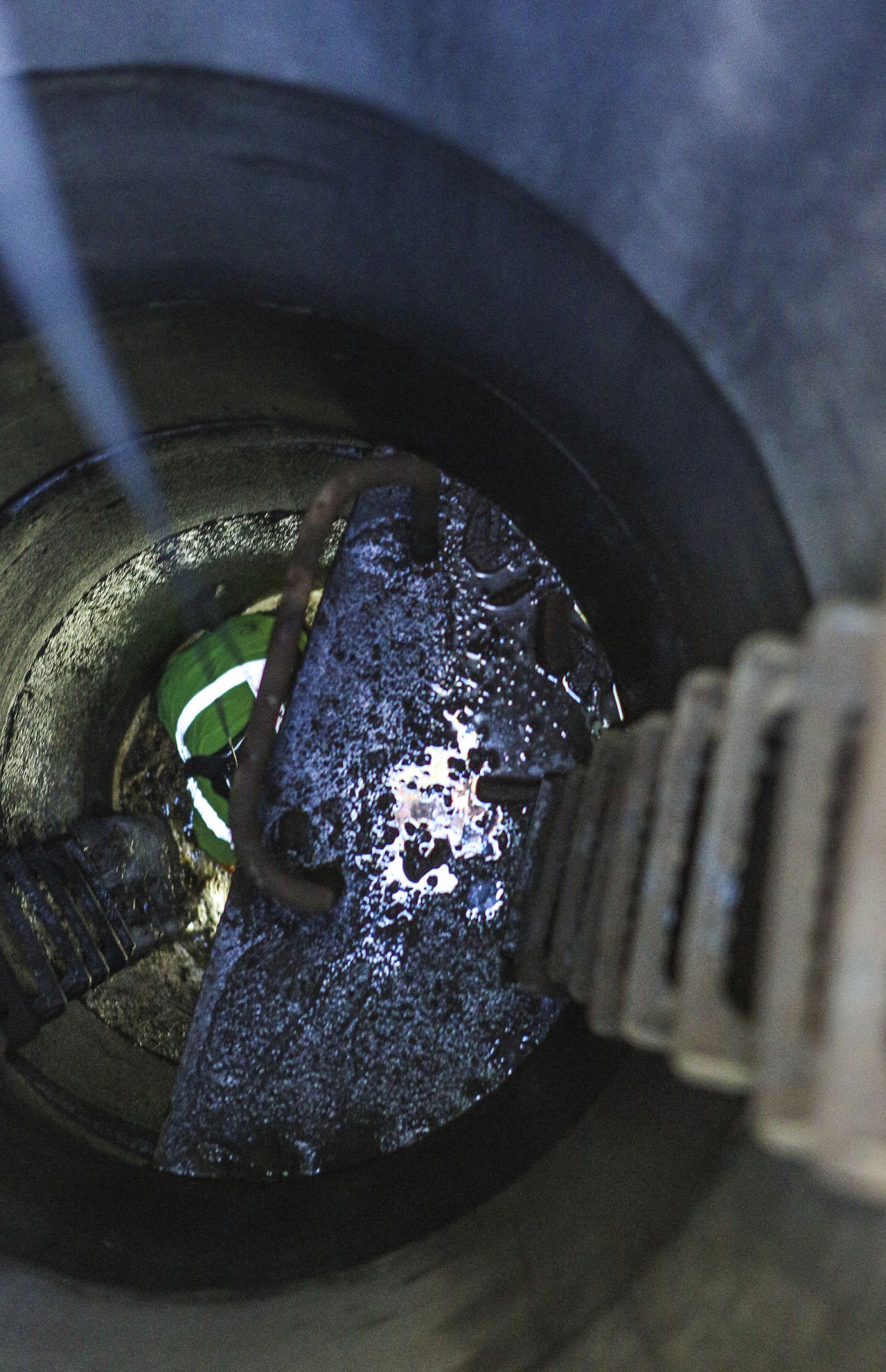 The safety reflector of Solon Service Department worker Erik Dekome’s vest glows as he collects sludge 30 feet below the pavement to keep it from blocking the sewer’s filtration system. Mr. Dekome said a lot of people don’t see the work the crew does because it’s often underground.

Mr. Dekome emerges from below ground to sunlight and fresh air after completing his task below ground.

The safety reflector of Solon Service Department worker Erik Dekome’s vest glows as he collects sludge 30 feet below the pavement to keep it from blocking the sewer’s filtration system. Mr. Dekome said a lot of people don’t see the work the crew does because it’s often underground.

It’s a dirty job but somebody’s got to do it. In the city of Solon, that somebody has a name.

Three names to be exact.

Erik Dekome, Tom Gibbs and Leland Sussel, the sanitary and storm sewer crew in the city’s service department, do a necessary, yet dirty and sometimes dangerous job, each and every day.

“Anything you put down the toilet, we come in contact with,” said Mr. Dekome, 31, of Garrettsvile.

The crew is not only responsible for all of the catch basin cleaning, storm mainline and lateral cleaning, Water Reclamation Plant maintenance and responding to sewer calls, but for the regular maintenance and cleaning of the city’s 22 lift stations and “whatever else we can throw at them,” said Dennis Varga, sewer division manager.

“This is a great group that loves the challenge of this job,” he said.

Mr. Gibbs, 36, of Eastlake, said he and his co-workers have been in the basement of every building at the Water Reclamation plant.

From jetting clogged pipes to removing grease and sludge, the job gets dirty, Leland Sussel, 31, of Garfield Heights, said.

“It’s hard to make our job glamorous,” Mr. Gibbs added with a laugh.

At the plant, the three have undertaken large-scale projects such as entering the access areas of sludge tanks and cleaning them from the inside out.

“We are shoveling sewage,” Mr. Gibbs said. “It was a three-day process to get that tank clean.”

The crew also works to ensure that sewers do not back up into people’s houses.

“If you see our truck show up in front of your house, you probably are having a bad day,” Mr. Varga said of what he tells residents when describing their job.

“People are usually frantic,” Mr. Dekome, an eight-year employee, said of when residents’ basements are filled with sewage.

“We just try to help them out the best we can,” Mr. Gibbs said.

The crew assesses the situation and if they can correct it, they will, or have the resident contact the plumber if the problem occurred outside of the city’s designated area.

“If we can correct their problem, that’s gratifying,” Mr. Dekome said.

“I like the job because it makes a difference,” Mr. Sussel, a city employee for 11 years, added.

The trio said that because all of their job is underground, people don’t really know what they do or understand the job, even some of their own fellow service department employees.

“People are not really too sure what is going on,” Mr. Gibbs said.

“If it were not for us, the city would flood and back up with sewage,” Mr. Sussel said. “We clean all the drains in the streets and do the sewer lines for all the businesses and houses.”

“We keep everything flowing and keep the water moving,” Mr. Gibbs said.

The crews utilize two combination-jet trucks for their job. One is used for maintaining the sewer system and one for the sanitary system. These trucks are equipped with vacuums and the three are trained in their usage and what pressure is appropriate for each different task.

“People don’t realize where things are going when they flush,” Mr. Gibbs said. “They flush and forget about it.” Before he began at the service department six years ago, he thought of a sanitary main being a massive pipe you can walk through. Instead, they are only 8 inches in diameter.

It is not uncommon for them to get sewage on themselves and are dressed in protective equipment.

Their work is labor intensive, dirty and hard, the three laborers noted.

It also comes with some dangers, such as the high electrical voltage inside the lift stations they maintain.

“Mixing that with water, there are a lot of hazards that go along with it,” Mr. Gibbs said.

The three have been trained in such areas as confined space entry and electrical safety, among other areas.

“We have knowledge of what (pressure) heads to use when in the trucks,” Mr. Sussel said, and what pressure is needed.

Their job is not one for the claustrophobic, Mr. Gibbs noted, as it’s very tight squeezing through a manhole.

There, they have seen it all, from snakes to dead raccoons to skunks.

Each day is unpredictable, Mr. Dekome said, and can involve anything from cleaning a catch basin to meeting a construction company on site.

“Sometimes we leave the shop and get three phone calls,” Mr. Dekome said.

While they work eight-hour shifts, they are always on call.

“Our operators have a huge value to the city because they have to know whether they can use these units to their maximum potential,” Mr. Varga said. “There are ultimo pipe ties, elevations and bends throughout the city. These are all variables we have to account for while operating these trucks.”

Mr. Gibbs said it is often hard to get a lot of gratification out of the job because a lot of people don’t know what these laborers do.

“They see the trucks and they see us standing around,” Mr. Dekome said, “but what they don’t see is a lot of what is going on is underground and we are jetting or cleaning something.”

“A lot of times people think there is a problem when they see us,” Mr. Gibbs said.

Mr. Gibbs said what he likes about the job in that it is always a new challenge and always something different.

Mr. Sussel said he likes to be able to make a difference. “It’s gratifying,” he said.

There is a lot of camaraderie among the laborers, both on and off the job.

“We’re friends outside of work, too,” Mr. Gibbs said.