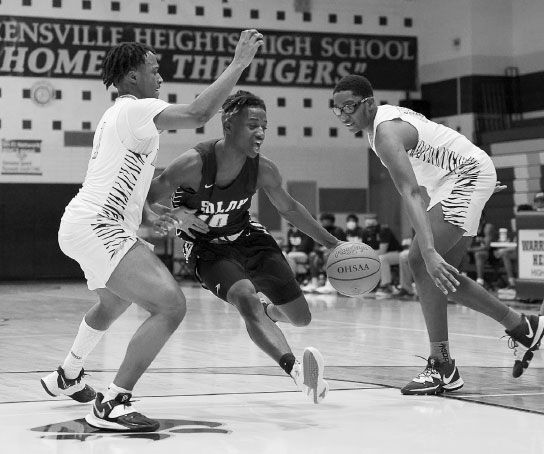 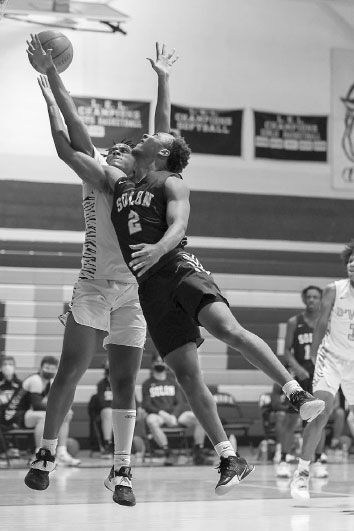 Seventy-eight points are usually enough to win a 32-minute high-school basketball game, and it nearly was for the Solon cagers during a road battle against non-league foe Warrensville Heights on Monday night.

With five guys scoring in double figures, the Comet cagers controlled a lead for the majority of the offensive struggle, and even pushed their command to 10 points, 64-54, on a pair of free throws by 6-foot-2 senior Jimmie Williams to open the fourth quarter on a continuation of a 10-2 run from the third.

But every time Solon tried to stretch its command beyond three or four possessions, the host Tigers would knock down a timely 3-pointer or get another key contribution from their standout backcourt of 5-foot-11 seniors Ramelle Arnold and Jaden Hameed.

“They’re both really, really good high school players,” Solon seventh-year head coach Tony DeCesare said. “(Hameed) had a great second half, really controlled the game offensively. We couldn’t keep him from getting to his spots, and, when he wasn’t scoring, he was creating scoring options for his other guys.

“And (Arnold), I think he came out and had 18 in the first half. So, they both kind of controlled a half of the game.”

Arnold finish with a game-high 25 points, with five boards and seven assists, while Hameed had 17 points, with five assists and two steals. As a team, Warrensville made 13 treys on a 48-percent clip from downtown, which allowed the Tigers to keep shifting the momentum in their favor every time Solon tried to create separation.

Solon 6-foot-4 junior Sam Marbury created a little cushion, 76-70, after he finished off an and-one opportunity with just over a minute remaining.

But Warrensville came right back with 5-foot-9 senior Jamarion Johnson – who finished with four 3-pointers – drawing a foul from deep for a four-point play that cut Solon’s lead, 76-74.

“They hit a three and get fouled, and it goes right back down to two,” DeCesare said. “And that’s a credit to their guys and the plays that they made to stay in the game. And then they just really took it from us at the end. They made a few big plays down the stretch. So, good teams will do that.”

Solon 5-foot-11 sophomore Rayquan Thompson earned a trip to the line and knocked down the Comets’ 19th and 20th free-throw makes of the game to provide his team a 78-74 upper hand, but Warrensville drained another triple to make it a 78-77 ballgame with 18 seconds to play.

On Solon’s ensuing inbounds, Thompson lost the handle on an unforced turnover just as he dribbled over the half court with a two-on-one opportunity. Warrensville’s Hameed picked up the loose possession and made a quick pass the other way to Johnson, who missed a layup. But Arnold was in position for the put-back bucket to give the Tigers their first lead, 78-77, since midway through the second quarter.

“(Thompson) was frustrated with himself for the turnover,” DeCesare said. “He’s a really good player, and that’s an uncharacteristic play, but that kind of thing, it’s fluky and it happens. But we didn’t run back with the intensity we needed to, because they missed that original layup before getting the put-back.

“We were a little slow in transition, which I think that’ll be a good learning point for our guys – we have to move to the next play quickly.”

Solon still had eight seconds to go the length of the floor to make something happen. Thompson dribbled down the court with confidence and made a backside feed to 6-foot senior Marcus Steele, who was stripped on a lay-up attempt with one second left.

On the ensuing baseline out-of-bounds play, Steele made a beeline to the hoop as the Comets’ first option, before Williams made a delayed cut down the center lane, got the feed from Marbury and put up a quick floater that hit off the rim and bounced out at the buzzer.

“He got off a clean look, and that’s all you can ask for,” DeCesare said of Williams’ shot. “I know he was disappointed it didn’t go, but he did everything he needed to do to get himself the look. I think, more often than not, you’re happy if that’s the case, because you controlled what you could. We executed, we got the ball to the guy we needed to, and he got the shot that he wanted. Those are all good things you can build on.

“And I told the guys, had that shot gone in, we feel different today, but we’re not a better team because of it. The result doesn’t always define the team you are, and I just think we’re a pretty good team that got beat by a pretty good team.”

Solon dropped to 2-1 in defeat, while Warrensville improved to 4-1.

In double-digit scoring for Solon, Marbury finished with 17 points, Thompson dropped 16 points, Steele and Williams collected 15 points apiece, and 6-foot senior Noah Obert got the nod for his first start and added 12 points, all in the first half, to sparkplug the Comets’ offense when Marbury was being face guarded and Steele was in early foul trouble.

“That doesn’t happen a lot at the high-school level, where you have that many guys contribute scoring wise,” DeCesare said about five Comets with 12 or more points.

“So, that’s good to know we have guys that can always have big games,” he said. “And if we can build on the other end of the court, I think it’ll be fine when it comes time to play these league games in January, and, more importantly, when we get to March.”

Through three contests, Solon is averaging 80.3 points per game, with wins against Chardon, 85-67, and Greater Cleveland Conference foe Brunswick, 78-65, with the Comets lighting it up from downtown in those victories.

Against Warrensville, the Solon cagers only made four 3-pointers, but that was more of a factor of taking what the defense gave them.

“We had shot it so well in our first two games that they weren’t helping off shooters,” DeCesare said. “So, that led to us getting a lot of stuff at the rim. And I think that’s a testament to what we can do offensively, that, if a team takes away one strength, we can just go to the next one, and our guys were smart to play off that. And it led to 78 points, which is usually enough. It was just two points less than what we needed this time.”

The Comets were scheduled to host Green on Wednesday.