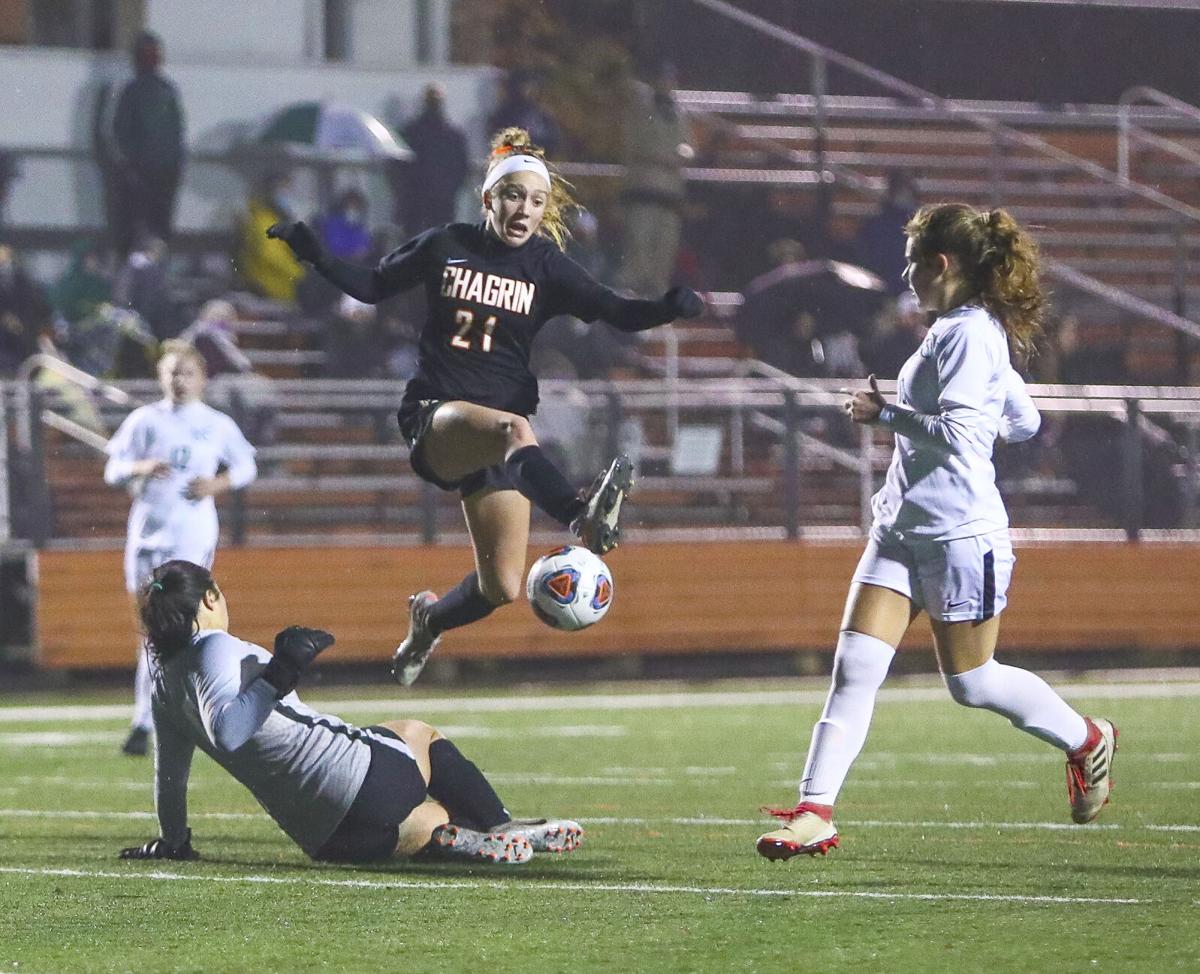 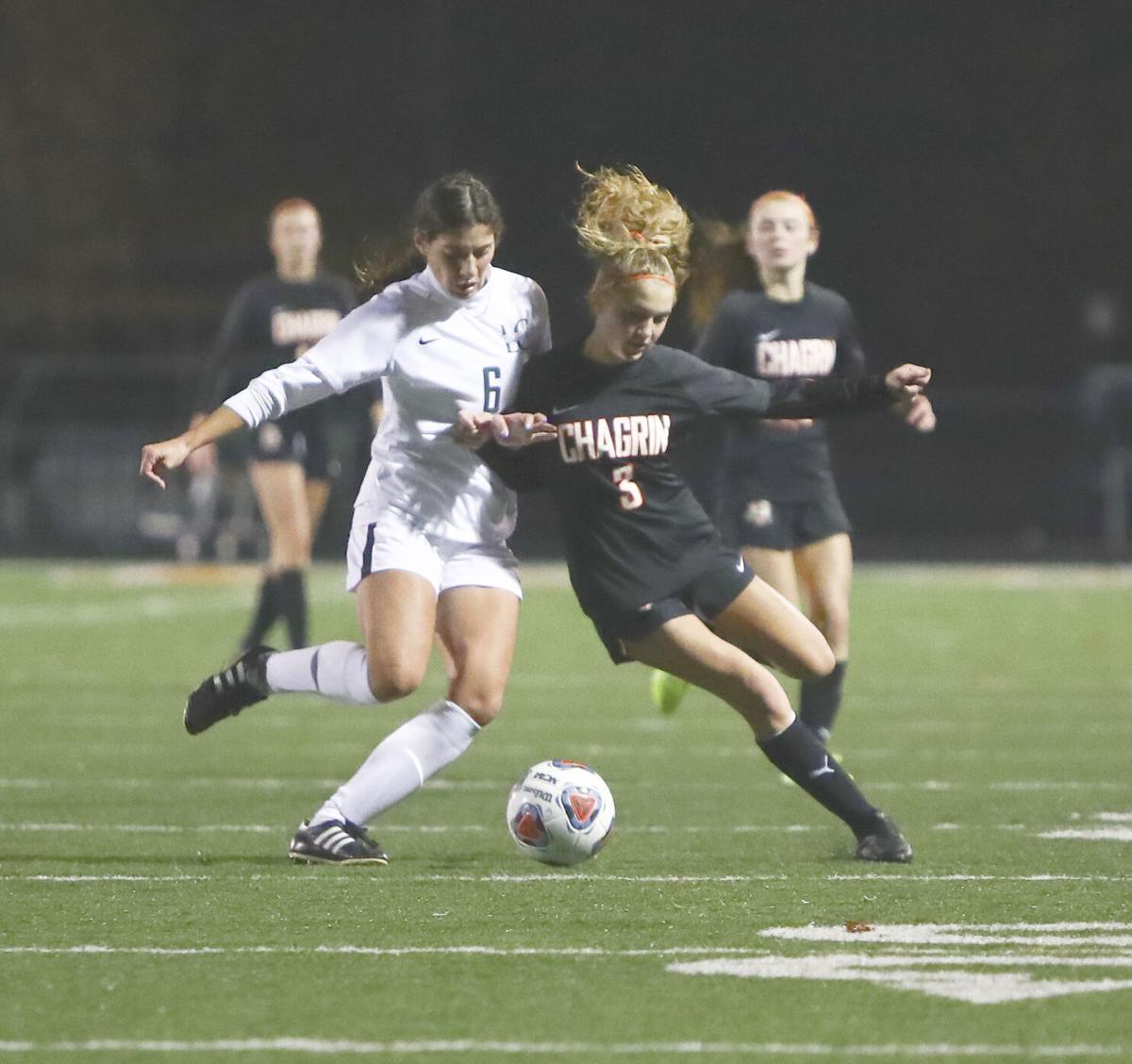 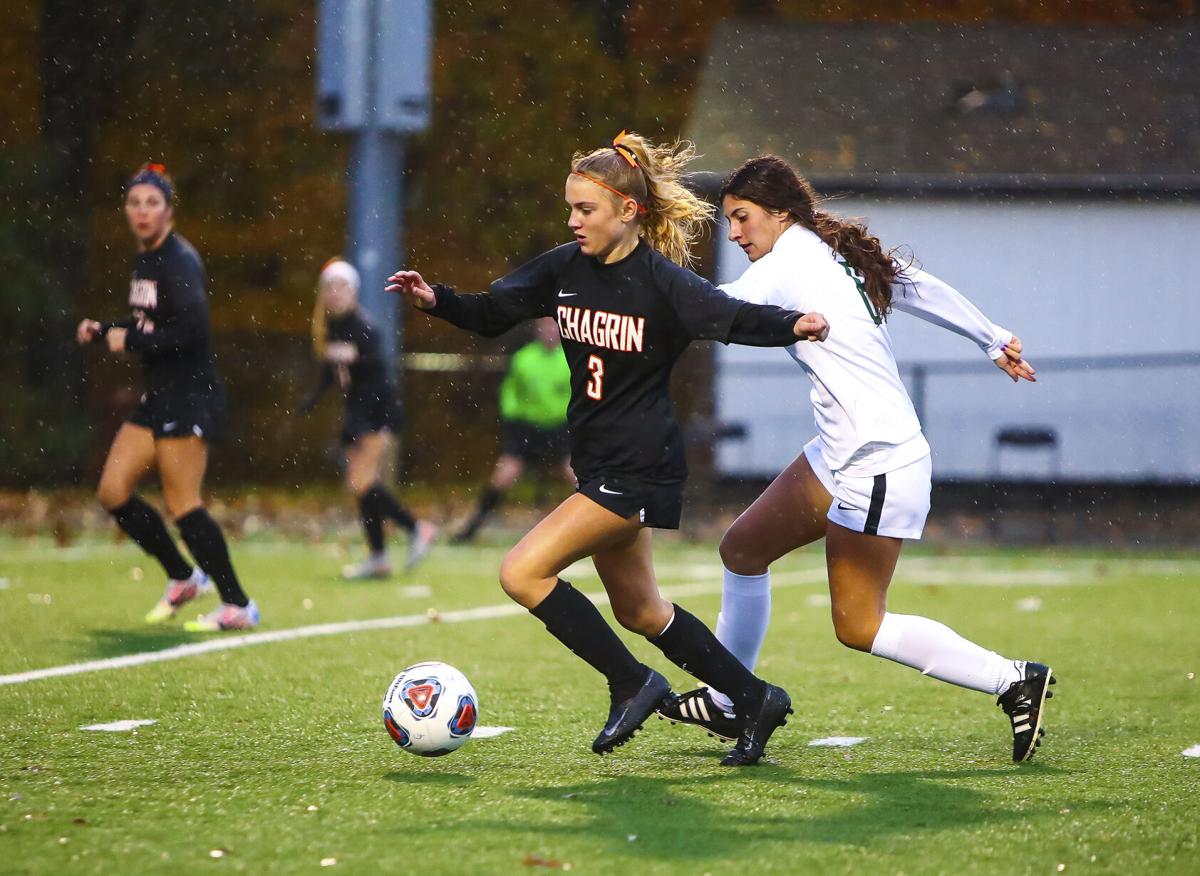 History was not on Chagrin Falls’ side during the Lady Tigers’ Division II district title game against Lake Catholic last Thursday on their home pitch at C.S. Harris Stadium.

The past four times the Chagrin Falls girls soccer program went into overtime during a district title game or further – going back to 2009 – it came out on the losing end, including shootout losses against Cuyahoga Valley Christian Academy in a 2014 district championship and against Hathaway Brown in a 2010 regional championship.

History repeated itself during a seven-round shootout against Lake Catholic last week, when the district No. 2-seed Lady Cougars (11-4-3) connected on six penalty kicks to knock off top-seed Chagrin Falls (13-4-1) by a 2-1 result.

Whether on the winning end or losing end, almost any coach will admit that he or she never wants to see a title game come down to a shootout.

“You know, I have written on my hand, ‘Take advantage of opportunities,’” said Chagrin Falls 29th-year head coach Pamela Malone, who had her entire palm inked up.

Particularly in the first 15-minute overtime period, the Lady Tigers were the more dangerous side with sophomore holding midfielder Kate Bartlett taking corner- and free-kick opportunities, with the latter being dropped by Lake Catholic junior keeper Sophia Pecjak but recovered.

Pecjak was out of position later in the period, with a loose ball in the middle of the box, but no Lady Tiger was within range to get the first foot on it.

And Chagrin Falls junior striker Peyton Gellin ripped a pair of shots from outside the 18-yard box, the first a low bullet that Pecjak scooped up and the latter going high and wide.

The Lady Tigers also had perhaps the best opportunity in the second overtime, with a diagonal feed from Gellin to sophomore winger Elana McGinnis and freshman winger Lindsay Burgess in the box, for basically a two-on-two attack, but McGinnis’ shot went wide.

While Chagrin surged late, it was Lake Catholic that came out the aggressor to open the match, including a 12-yard strike by senior winger Ella Hadley right at Chagrin senior goalie Aerin Krebs in the fifth minute.

Krebs, who finished the 2020 campaign with 70 saves and eight shutouts, then had to make a sliding tackle at the edge of the box to stave off another Lady Cougar attack in the seventh minute.

And Krebs also made a diving, reaching-back save on the remnants of a long free kick with 25 seconds to go in the half.

The Lady Tigers did have some shots on goal themselves, including Gellin beating Lake Catholic senior center back Julia Marusic on a vertical feed for a rip from 15 yards out in the 16th minute, as well as a 28-yard free kick by Bartlett that keeper Pecjak was barely tall enough to get a hand on in the 21st minute.

But, for the most part, Chagrin’s vertical attacks were going nowhere in that opening 40 minutes.

“I think the first half the girls were a little nervous and they were playing a little fearful, like, ‘Oh my, gosh, the level of the game,’” Malone said. “That really hasn’t been our style in the past four or five games. We’ve really brought it down and have done possession, but they were nervous. And we said, ‘Hey, if you get in trouble in the back, feel free to clear it out,’ but that seemed to be what we went to all the time, because they were pressuring really high on us.”

The Chagrin Falls girls still managed to take a 1-0 upper hand before the break, thanks to the speed of McGinnis against the physical play of Lake Catholic.

In the 39th, McGinnis got the step on a Lady Cougar defender and was taken down in the box. Gellin stepped up and buried the ensuing penalty kick, on a low, right strike, for her 20th goal of the season.

The Lake Catholic fans weren’t pleased with the call, naturally, but the Lady Cougars were pushing the line to see how much physicality they could get away with all half, and it finally caught up to them.

“Well, Lake, if you did a scouting report on them, you’re going to know that they’re very physical,” Malone said. “So, (McGinnis) running in, it was just body on top of body. And when you get into the box, anything can happen. And she was fouled from the front, from the back – just mauled. So, it was good. I wish we would have scored in the realm of play. When we scrimmaged them in early August, they beat us, 3-2, and every single goal was off a set piece.”

In the 51st minute, Lady Cougar sophomore Shelby Nagy played a corner kick short to senior midfielder Carli Salantino, who had a better angle to send it into a crowded box, where Hadley was waiting.

From about 15 yards out, the Lady Cougars’ leading goal scorer somehow had space to turn and shoot, burying the 1-1 equalizer far post. It was her 14th tally this season.

“(Hadley) had way too much time to get that shot off, being in the box on a corner kick,” Malone said.

Chagrin Falls nearly reclaimed the lead with 1:15 left in regulation, when McGinnis got the first touch for a deflection off keeper Pecjak at the edge of the box, and then Gellin’s leg was just a tad too short for a follow-up toe poke.

The score remained, 1-1, through both overtimes, and then the two sides were still deadlocked through the initial five-round shootout, with Chagrin Falls missing its first penalty kick and Lake Catholic missing its last penalty kick.

Chagrin’s Bartlett, junior Sarah Burgess, senior Sadie Nachtwey and Krebs all buried their shots. Lake Catholic could have ended it in the fifth round, but the bottom of the cross-bar saved the Lady Tigers.

Chagrin’s McGinnis and Lake Catholic’s Salantino both made their sixth-round penalty kicks, before Lady Cougar senior Gina Grandini buried the decider in the seventh round for the 2-1 Lake victory.

“We’re sad tonight, because we really wanted to advance,” Malone said. “I mean, it hurts right now. It stings. I’ll be up at 4 o’clock in the morning thinking about what I could have done, but we’re grateful that we had this season. We are.”