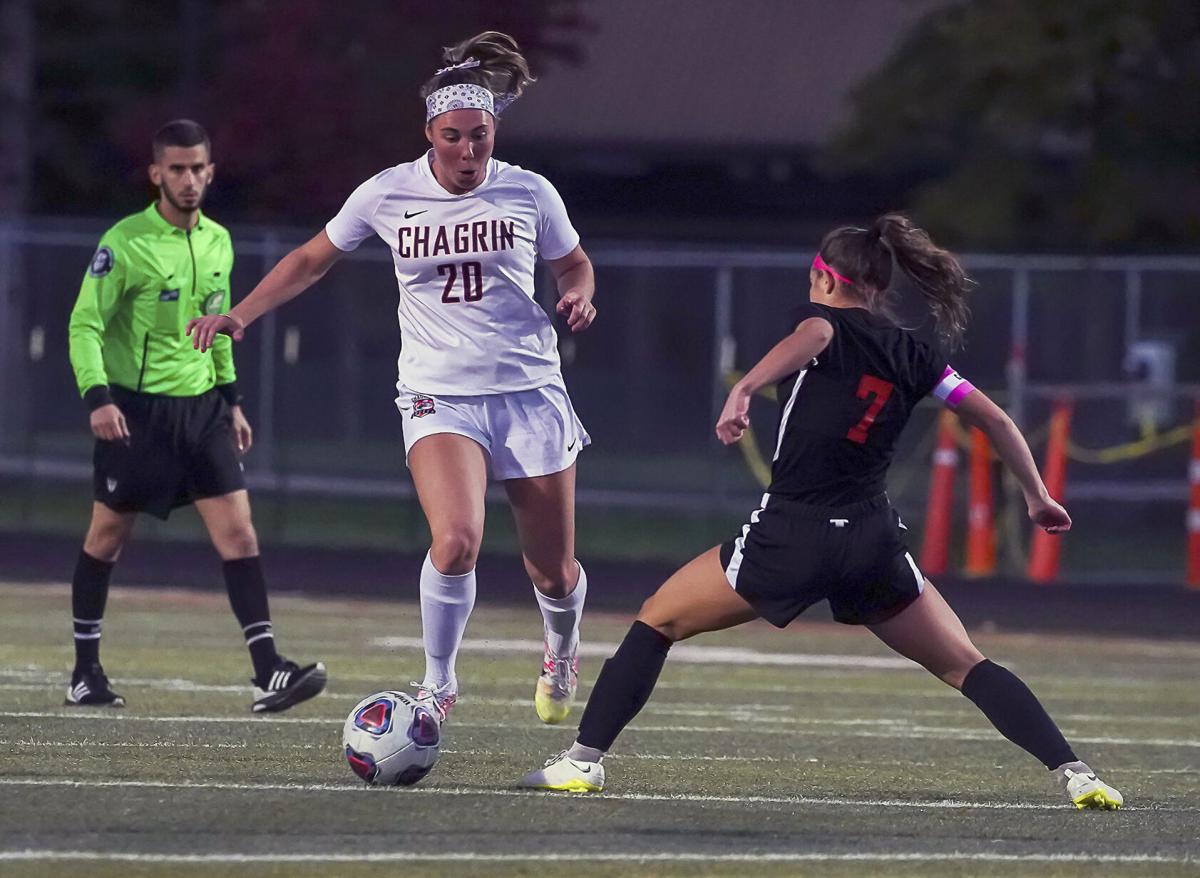 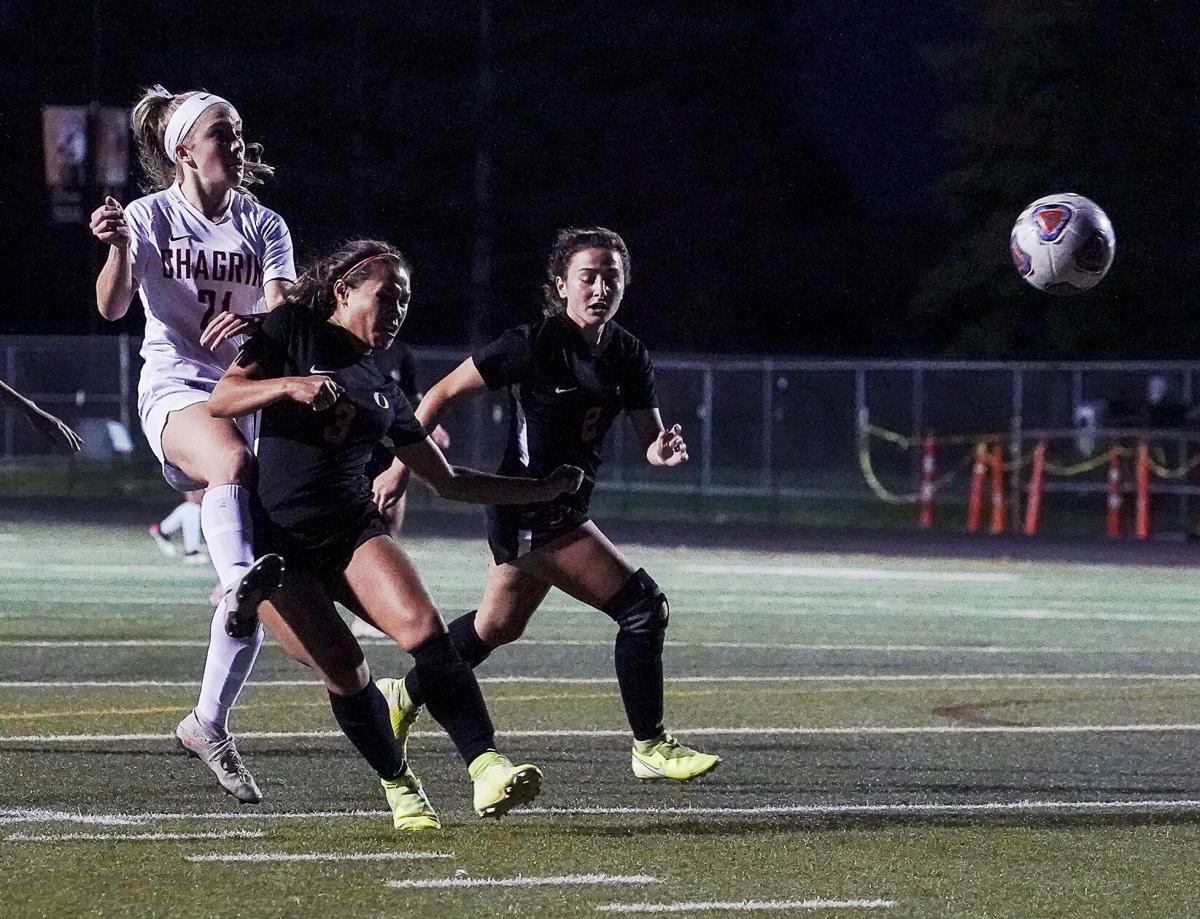 The Chagrin Falls girls soccer team had one of their stronger outings of the season, but the Lady Tigers’ six-match unbeaten streak came to an end during a road battle against fellow state-ranked Rocky River on Monday night.

Trailing, 1-0, at halftime, the Lady Tigers put the pressure on Rocky River throughout the second half, putting seven shots on target to the Lady Pirates’ two in those 40 minutes, but a 2-0 tally in the 77th minute allowed River to remained unbeaten at 13-0-2.

Rocky River entered the game ranked No. 3 in the Division II coaches poll, while Chagrin Falls (11-3-1) came in ranked No. 13 in the state for its regular-season finale.

“It was a very good outing for us,” Chagrin Falls 29th-year head coach Pamela Malone said. “We gave up the second goal with like three minutes left. And you definitely don’t want to do that in a tournament. So, I never consider a game a loss. I consider them to be lessons.”

Before the loss, Chagrin Falls was riding four straight shutout victories against some quality sides, including a 1-0 result against Orange (6-1-1) last Thursday and a 2-0 result against Division I Madison (8-4-2) on Saturday.

“Orange was a situation where they had 10 people behind the 20-yard line and basically packed the box,” Malone said. “So, that was a good lesson for us, because we were able to pass it a lot around the midfield and try to draw them out.

“And then we ended up just saying, you know what, they’re not coming out, so let’s just attack the flanks and work on our crosses. We ended up getting a corner, and it paid off.”

Then during a road test on Saturday at Madison, the Lady Tigers felt the fatigue of playing on a natural-grass pitch, as well as the difficulties of putting long balls on cue in windy conditions.

After a nil-nil first half, Gellin hammered home a header, her 15th goal of the season, on a cross from Burgess, her 13th assist of the season, in the 48th minute.

Then sophomore forward Elana McGinnis found her spot inside the box to cash the 2-0 tally in the 64th minute. After scoring six goals in 2019, McGinnis leads her team with 17 goals through the regular season this campaign.

“She was determined to come back a bigger, faster, stronger player,” Malone said. “So, she played some club soccer in the offseason, and it’s what has changed her. We always say, ‘You build yourself as a player in the offseason. We manage you as a team in the season.’”

While Chagrin Falls four-year starting goalie Aerin Krebs has done Aerin Krebs things this season – allowing fewer than one goal a game with seven shutouts – a big part of the Lady Tigers’ four consecutive clean sheets entering Monday’s game against Rocky River was the insertion of senior Maria Munday into the starting lineup.

Chagrin’s back line of seniors Marley Graham, Marley Goodwin and Jamie Dustin and freshman Maggie Oliver has been solid, but the Lady Tigers had to shuffle some things around with sophomore standout Kate Bartlett, a center midfielder, having to quarantine twice this campaign for a total of four weeks.

“As a result of Kate being out, we had to find a holding center mid,” Malone said. “That moved some pawns around, and Maria was a defender last year and rotated in as an outside marking back, but we put her in at practice, and she just has dominated back there. It’s a perfect fit for her, because she’s a defender and a hard-nosed tackler, and she’s also good in the air.”

Six defensive-minded players who all deserve to start is a good problem to have, but the Lady Tigers lived in their defensive third for a good chunk of that first half against state-ranked Rocky River on Tuesday.

After 350-plus minutes without allowing a goal, Chagrin Falls faced a 1-0 deficit when River junior Sophia Murray found room on the end line to drop a pass to the low slot that sophomore Bella Crompton buried from just outside the inner box in the 25th minute.

The Lady Pirates owned a 6-1 advantage in shots on goal in the first half.

But the tide of the pitch changed in Chagrin Falls’ favor in the latter 40 minutes.

“The second half, we really pressured them,” Malone said. “And Pat Hopkins, who’s a great coach, said, ‘You guys are the best team we’ve played all season. You pressured us. You made us play on our heels that second half.’

“So, that made us feel good, but we just needed to capitalize on the few opportunities that we had. We had a couple crosses that we didn’t get on the end of. But they were a good team, and they just kept going and going, and we stuck with them. We really did. So, I was happy with our play.”

Bartlett sent in the delivery far post, which almost curved in for a goal all on its own. Chagrin Falls did have a player stationed on the back side, but she didn’t make an attempt on it for a header, Malone said.

A cross from Burgess later in the half got past River senior keeper Sabrina Rick and trailed out of bounds with no one on the back door to put it home, Malone said.

“That was another opportunity that we should have taken advantage of and we didn’t, because when you get into big games, good competition, you only get a couple of those a game,” she said. “And you need to make them count. So, one of my messages to the girls was, ‘It’s the little things. It’s being on that back post. It’s nailing that tackle. It’s staying goal-side on defense.’”

Rocky River put the game away in the 77th minute, when senior forward Maya Patti dished out her 11th assist of 2020 with junior Taylor Byall on the gift-wrapped end of it for the 2-0 final.

Earning the top seed in its 12-team district, Chagrin Falls will host the winner of No. 6 Orange and No. 12 East Cleveland Shaw at 6 p.m. Oct. 22 at C.S. Harris Stadium.

Orange could have picked any quarter bracket to play in but specifically elected for a possible rematch against the Lady Tigers.