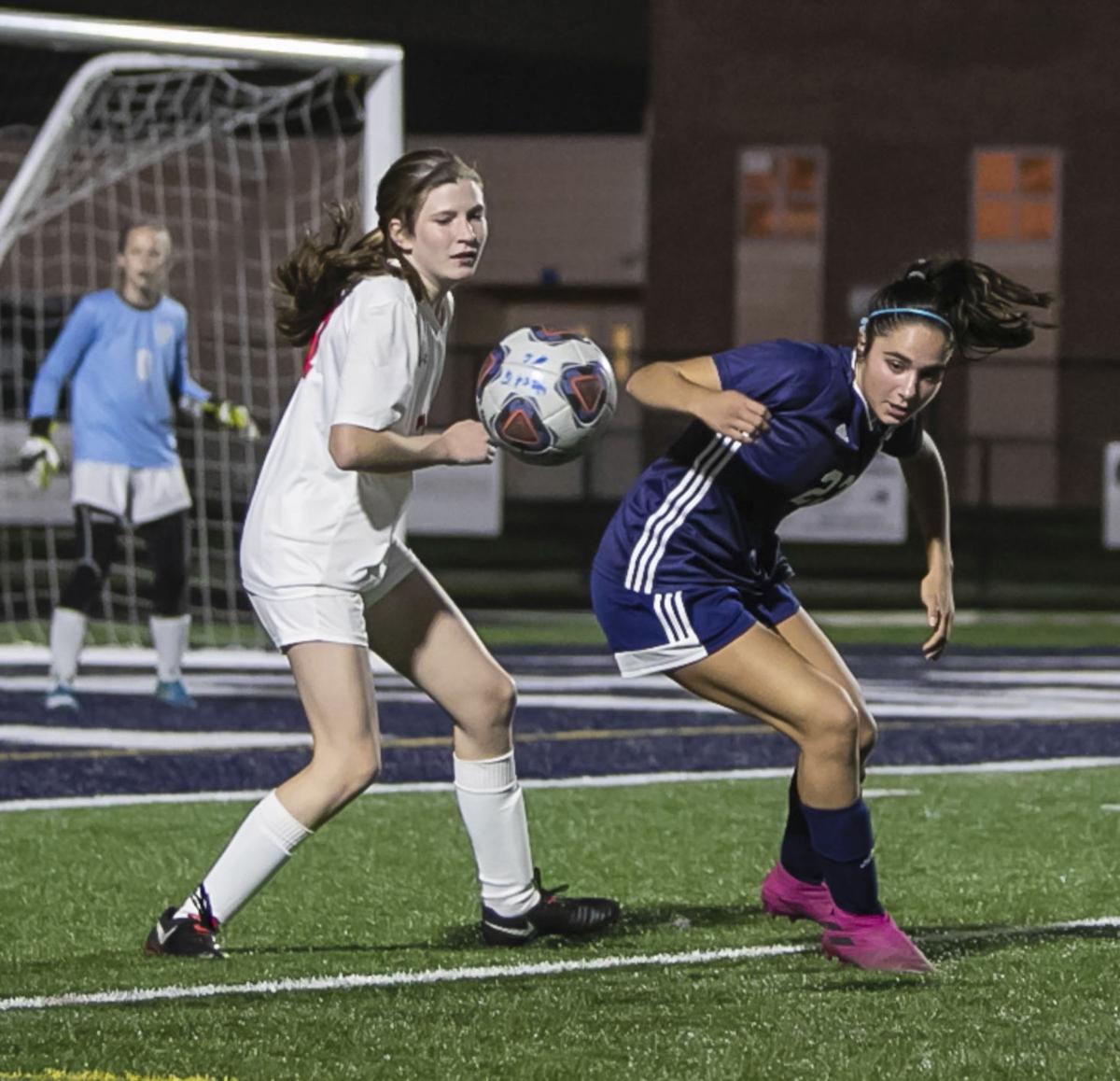 The stiffer the competition, the more weight a title carries along with it.

So, with Division II state No. 6-ranked West Geauga, according to the coaches poll, defeating Division II No. 17-ranked Chagrin Falls (10-2-1) and Division III No. 4-ranked Kirtland (9-4), before completing an unbeaten league mark with a 4-0 win against Hawken School last Thursday, the Lady Wolverines earned every bit of their 2019 banner.

Entering the final stretch of their regular season, the West G girls are 11-1 with a 5-0 mark in the CVC under third-year head coach Kori Jesenovec. Their lone loss was against reigning Division I region champion Twinsburg.

“The girls are just self-motivated, really,” Jesenovec said. “I think that’s just the biggest thing, especially with high school sports. I mean, they came into the season prepared and ready to go. I think that’s kind of been one of our biggest keys so far, is that these girls are fit and they’re able to withstand long games. You know, a lot of these girls are getting lots and lots of minutes, too. So, they’re staying healthy.”

West Geauga handed Chagrin Falls its first loss, 2-1, on Sept. 12, with freshman forward Frankee Flesher scoring the game-winner in the 44th minute, not to mention fellow Lady Wolverine freshman Ashlyn Drayer’s save on a penalty kick earlier in the match.

And West Geauga delivered Lake Catholic its second loss, 3-2, on Sept. 19, when Flesher stepped up again, netting the 2-2 equalizer off junior forward Nicola Ehrbar’s corner with 10 minutes to play, before burying another game-winner with five minutes remaining.

Most recently, the Lady Hawks secured their outright banner in that 4-0 victory against Hawken on Sept. 26, when Flesher provided a 1-0 lead off a through ball from senior winger Grace Keiper, before Ehrbar got busy with a hat trick in the second half.

“Nicola (Ehrbar) is just an outstanding athlete, and she’s constantly testing her limits,” Jesenovec said. “So, she has a natural knack for finding the back of the net, and she’s looking for those goal-scoring opportunities throughout the whole game. She’s also got a lot of girls around her who are also big goal scorers.

“Frankee Flesher, a freshman, coming in and having the impact that she’s had this year, I mean, that takes a lot of stress off somebody like Nicola, where now teams have a lot of forwards to kind of look out for in both Nicola and Frankee.”

Through 12 games, Ehrbar has a team-high 20 goals with four assists, while Flesher has come on with seven goals and an assist.

The Lady Wolverines have some rigid competition left in the regular season, including home battles against Division II No. 13-ranked Lake Catholic (7-2-3) on Oct. 7 and Kenston (12-0-1) on Oct. 12, but Ehrbar is on pace to continue her chase of coach Jesenovec’s program mark of 24 goals during West Geauga’s 19-1-2 Division I regional runner-up campaign in 2010.

“The biggest parallel I see is there are a lot of goal scorers on our team,” Jesenovec said. “I think, in 2010, when we made our run, you know, they started to get the players’ numbers who were the goal scorers, but when you have goals coming from multiple different angles and the team is just fit and ready to go, it’s hard to defend.

“And I think too we have an awesome group of captains that have a different leadership ability in their own special way. Not to mention, the senior class in and of itself, they may not be wearing an armband, but they are just acting with the character of what captains should be.”

West Geauga had eight players who were honored on senior night against Hawken, four of whom start, but Jesenovec specifically mentioned non-starter Vivienne Weir as someone who puts her best foot forward for the girls around her.

“Just showing up to practice and practicing hard and pushing the girls around her and having a standard is just part of her game, and she just brings it every single day,” Jesenovec said “And, when you see that in your senior leaders, it’s huge for whole entire program’s mentality.”

While Hawken’s record stands at 4-6-2 this campaign, the Lady Hawks are as dangerous a team as any in the CVC. They battled through a 1-0 loss against state-ranked Chagrin Falls and tied state-ranked Lake Catholic, 1-1, on Saturday.

Combining for 40 points on the pitch so far, the Ehrbar sisters have to be one of the most dynamic duos in Northeast Ohio.

“I think Rae is the most selfless player on our field,” Jesenovec said of the younger Ehrbar. “She is just a workhorse in the center midfield. She’s another one of those players that rarely comes off the field for us, works her tail off all around the ball and is constantly looking for those opportunities.

“It’s not necessarily that she’s not looking for herself, but she just finds her teammates in those right spots. And she keeps the flow of the game a lot of the times. You see her win the ball and just keep the ball in our possession, which is huge for creating a flow and a pace for our game.”

With the draw for the playoffs on Oct. 6, the Lady Wolverines will likely be the favorites among 10 teams in the Division II Mentor District, which includes the likes of Lake Catholic, Hawken School and Notre Dame-Cathedral Latin.

West Geauga already defeated Hawken, 4-0, and NDCL, 2-1, and will play Lake Catholic in a regular-season affair the following day.

“We definitely don’t have all our goals set in stone for the remainder of the season,” Jesenovec said. “But coming in against quality opponents like Kenston and Lake Catholic, I think these are going to be some really good challenges for us to see what we have and our potential for the playoffs.

“But we know the record that we have, and, no matter who is on the other side, we have to make sure that we go out there and we do our job.”