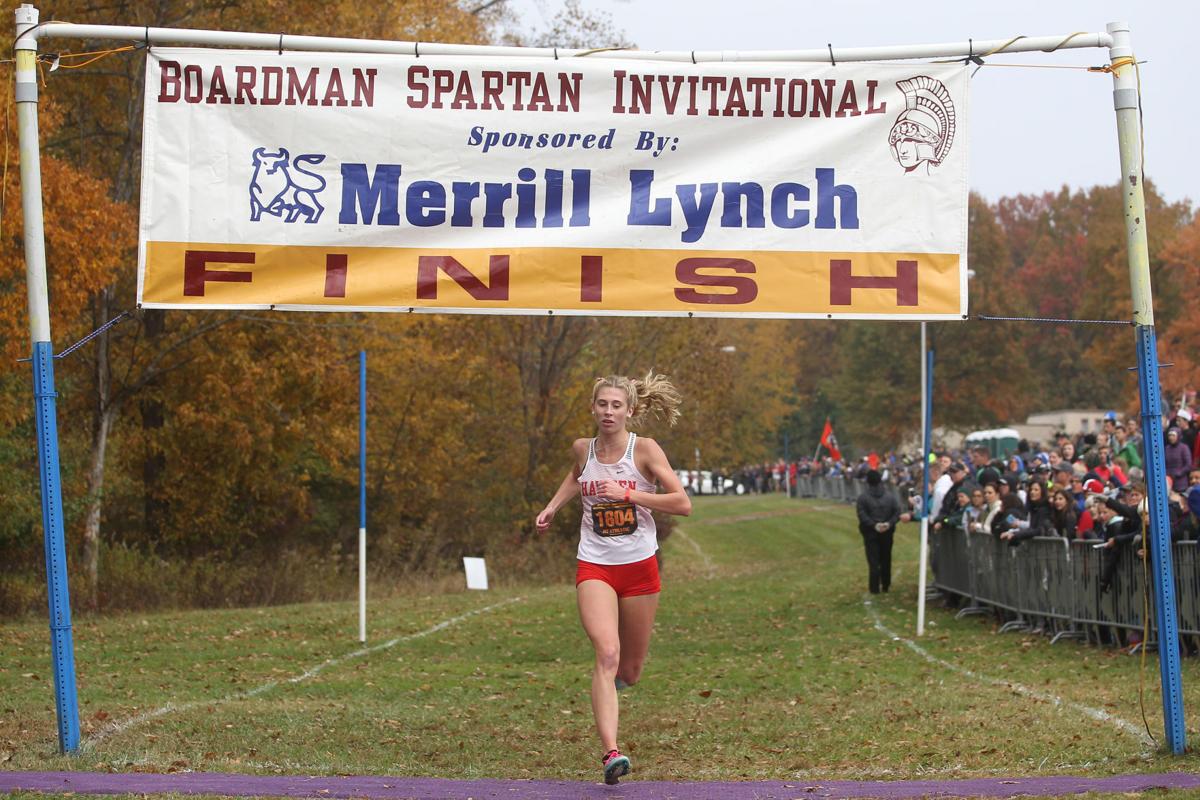 Hawken School junior Ella Gilson crosses the finish line in first with no competition in sight during the Division II region cross-country meet on Saturday at Boardman High School. 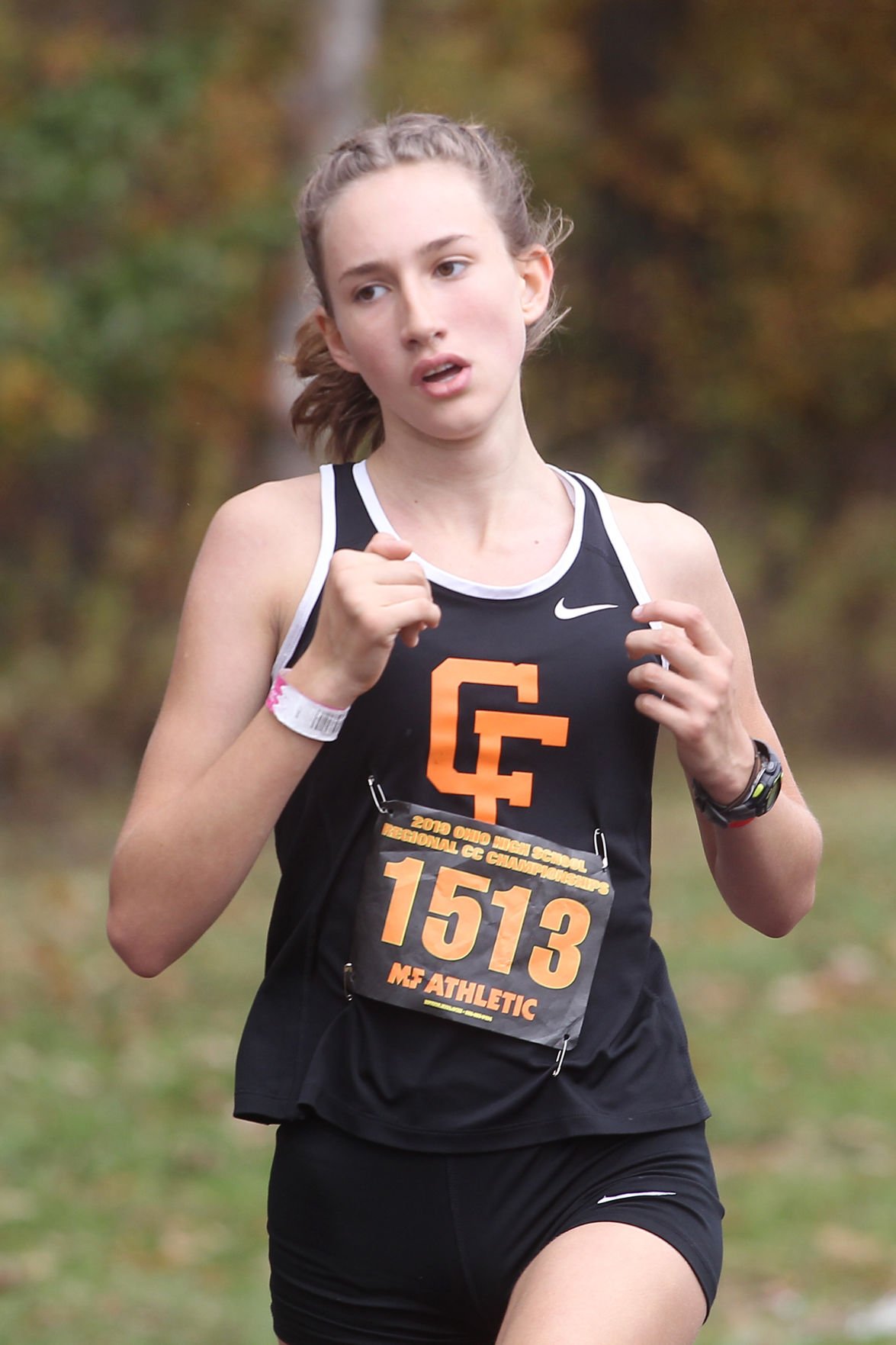 Chagrin Falls sophomore Wren Opperman keeps her rhythm to turn in a top performance for the Lady Tigers in regional competition.

Hawken School junior Ella Gilson crosses the finish line in first with no competition in sight during the Division II region cross-country meet on Saturday at Boardman High School.

Chagrin Falls sophomore Wren Opperman keeps her rhythm to turn in a top performance for the Lady Tigers in regional competition.

History continued to repeat itself for Hawken School junior Ella Gilson, which wasn’t such a bad thing during the Division II region cross-country meet on Saturday at Boardman High School.

If a regional title by 27.35 seconds last year wasn’t good enough, the Lady Hawk repeated her crown by besting her nearest competition by 40.18 seconds on the 5-kilometer course this year.

“I felt strong and I just tried to take out my first mile hard to see how it went from there,” Gilson said. “But I thought the weather was perfect for running, and I had planned on running away from the crowd, just kind of running my own race, and having it be a mentally strong race for me.

“But I think some of the girls stay with me, for sure, for the first half mile, and then after the mile I think I pulled away a little bit.”

Despite running most of the race way out front on her own pace, Gilson said she still pushed hard through the entire 5-kilometer course, because that’s her focus every single race for the workout aspect and to continually test her personal limits.

As a team, Hawken averaged three seconds faster than a year ago but couldn’t quite secure a repeat state berth. The Lady Hawks finished seventh with 212 points, coming in 20 points behind sixth-place Chagrin Falls, which secured the final spot out of the region.

“My team’s amazing and I’m so proud of them,” Gilson said. “Everyone ran their hardest and gave it their all, and even though we didn’t make it out as a team, we still had a really successful and fun season. There’s three seniors on the varsity team this year, and I’m really happy our team got to have that last race together.”

Joining Gilson for a third straight trip to states, meanwhile, Hawken junior Juliana Metz finished 15th overall in 19:43.05. It took 20:06.44 to get out of the Boardman Region this year.

While Gilson is the defending state champion heading back to the National Trail Raceway this Saturday in Hebron, Metz is a two-time all-Ohioan.

“I haven’t really run much this season. It was just my third race of the year,” Metz said about her regional performance on Saturday. “And I’m still coming back, but it felt pretty good and I hope to be able to improve.

“And I did fall down. I was pushed down with around 800 (meters) to go. So, that was a little nerve-wracking.”

Metz went through an iron deficiency for the majority of the season, she said, which is now under control, but it kept her from her usual aerobic training of the past few years.

Despite running without the aerobic base she would want, Metz said her legs held up well in the final third of the race. Her main issue was getting back to rhythm after getting physically knocked down and having to pick herself back up with about a half mile to go, she said.

“That really threw off my rhythm, when I fell down, so I had to work really hard at the end,” she said. “I don’t know if I can say for sure, but I think someone purposely pushed me from behind. We were going around a turn, and someone was behind me. I never experienced that before, so I was surprised.”

The Chagrin Falls girls also had a pair of harriers within the top-24 cutoff, but the Lady Tigers had enough depth to secure their program’s sixth straight trip to the big dance as a team.

“Our team’s goal was to make it to state, and we definitely executed that,” Hoelzel said. “And that’s really all that matters, because as state we can really show what we have left.”

With that mentality, Hoelzel went from a 41st-place finish at regionals to a 26th-place all-Ohio finish with a personal-best time at states during her freshman season in 2018.

A regional veteran, Hoelzel said she ran a more controlled race on Saturday at Boardman that she did a year ago.

“I think mile by mile, I was trying to run my best race, hang on and pass as many people as I could,” she said. “It was more about a race of place and making it to the finish in the best position possible than a race of time. So, I was just trying to get those places and catch every girl I could in order to benefit the team. And I’m excited for states.”

Opperman was also an all-Ohioan last year, finishing 22nd at the big dance to lead the Lady Tigers to place ninth in the team standings.

Clark and Stinson also have state experience from last season, while Larkin, Scott and Coffey will be making their debuts.