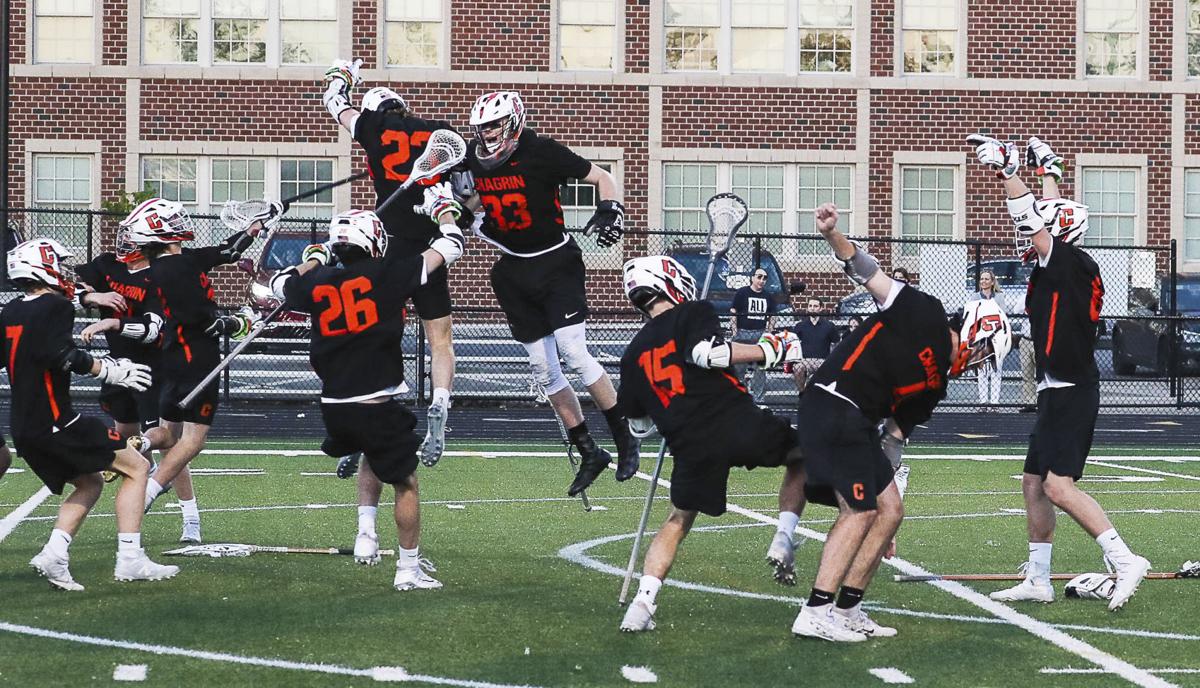 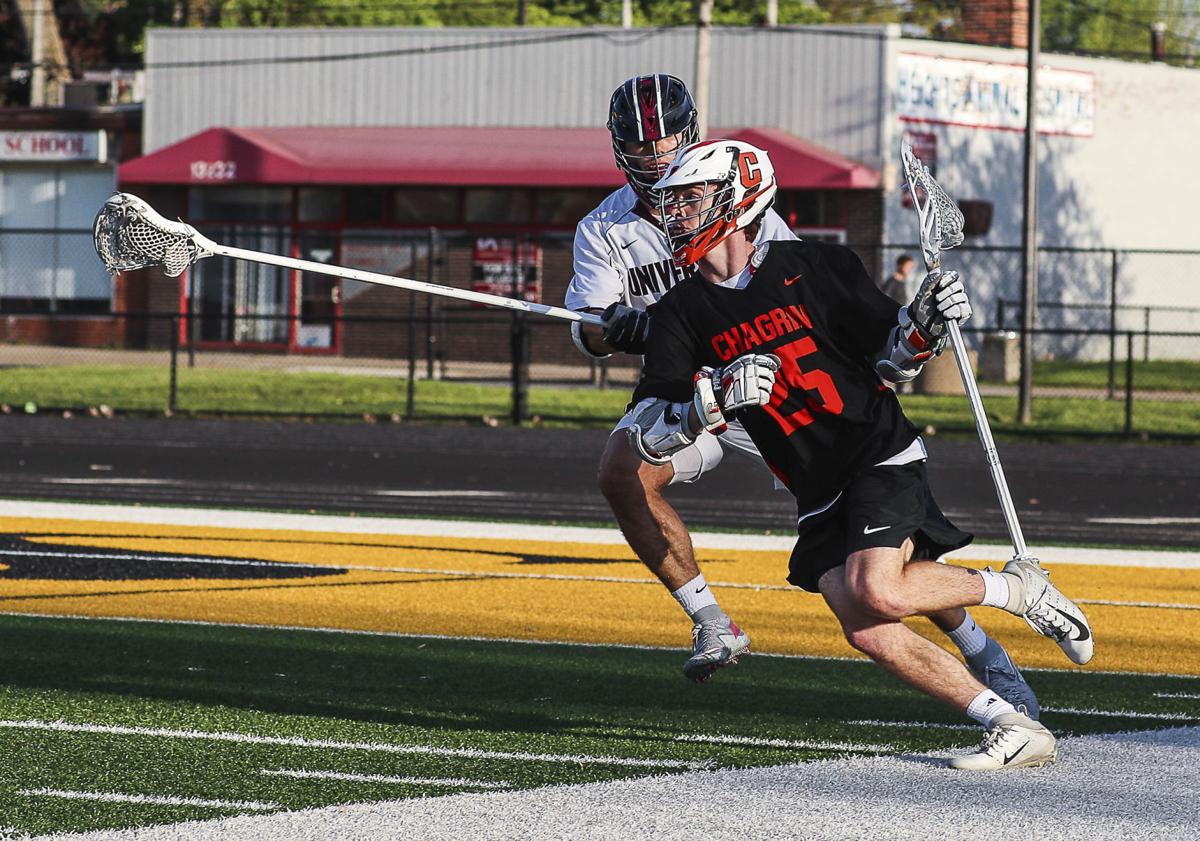 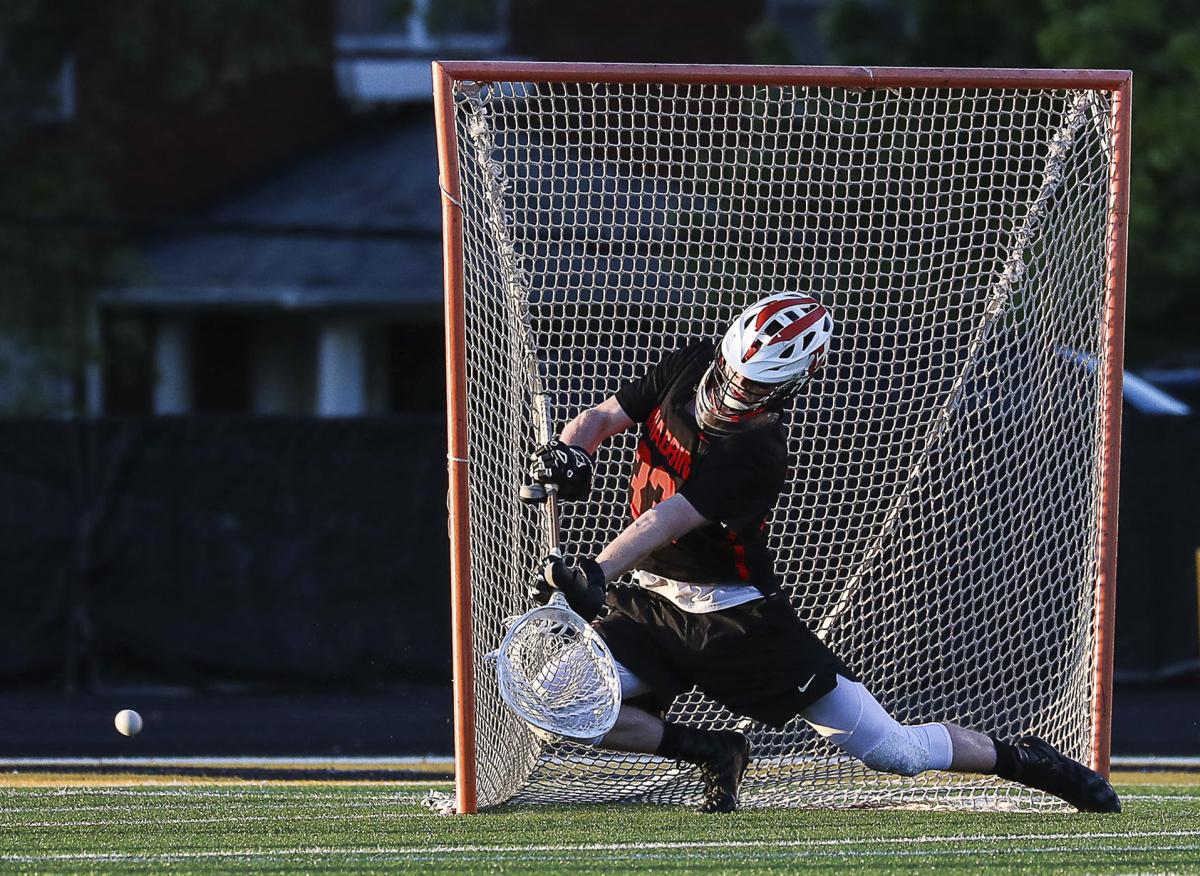 By the end of the night, it was the Tiger defensemen who left University’s attackmen puzzled and scratching their helmets in defeat.

In the fourth straight meeting between the two programs on that stage, the pole defense of Chagrin Falls juniors Clark Reboul and Lucas Gaizutis and seniors Bradyn Carroll and Scotty McCormack held the Preppers scoreless for 26 minutes, 34 seconds, to motor the Tigers to a repeat state final-four berth, 8-6.

That Tiger foursome collected 15 groundballs and caused six turnovers throughout the 48-minute battle.

“Without a doubt, this is the best they’ve played,” Chagrin Falls third-year head coach Paul Corto said of his defensemen. “It was an outstanding effort. Coach (Devin) Ockerman put together a great game plan for us. We knew we were going to play man and zone coming in.

“Zone gives us the opportunity to pack it in and for our goalie to see the ball and make saves. So, we’re comfortable playing both, and it kind of just depends on the tempo of the game. We’re a much better team playing with a lead. We thrive on it and on putting teams away. And, once we got into the fourth quarter, we knew we were going to win this game.”

University defeated Chagrin Falls in the regular season, 9-7, with the Preppers winning the third quarter, 4-3, in that game.

But the Tiger laxers came out of intermission on a mission in the region championship, outplaying University, 3-0, in the third frame to take command of an 8-4 upper hand heading into crunch time. And while University was playing with a four-goal deficit for the majority of the fourth quarter, there were times the Preppers couldn’t even get a shot off.

“We watched a lot of film and knew what they were going to do,” Chagrin’s Gaizutis said. “We knew their players, and we just stopped them.”

While Chagrin Falls has the luxury of all-American senior goalie Otto Bergmann between the pipes who collected 16 saves in the regional title game, the Canisius College signee didn’t have to play hero for the Tigers to come out on top.

Although, Bergmann did collect six saves in the first quarter to help set the tone of the game. Specifically, University senior attackman George Curley buried four goals against Bergmann in the regular-season affair, but Chagrin limited him to one tally in the playoff rematch.

“We knew they were going to try and attack the backside, so we tried to take away the backside as much as possible and force shots from up top,” Bergmann said. “And we knew their good shooters up top would generally go high, which, of course, didn’t happen, so we just had to roll with it and pick up those outside shooters, which we did.”

University struck first on a failed Chagrin Falls clear, when Prepper junior attackman Charlie Brennan capitalized off the turnover and buried an unassisted tally for the 1-0 lead with 10:11 to go in the first quarter.

But Chagrin scored the next three goals for the 3-1 upper hand at the quarter mark. Tiger junior attackman Cam Owen found the back of the net on a rebound off University senior Critter Coughlin’s original save; senior middy Griff Lowe went straight to cage in transition off a clear from Bergmann; and freshman middy Cam Croasdaile unleashed a sniper of an outside bouncer with 28 seconds remaining in the frame.

Although the Tigers’ game plan was simple – win groundballs and stay out of the penalty box – Chagrin Falls’ man-down defense shut out the Preppers’ extra man twice in the opening frame.

“Our goalie, the Region 6 player of the year, did outstanding,” coach Corto said. “And our defense made slight adjustments, and we stepped up. It’s just a credit of our preparations for this game and our coaching staff for putting these guys in positions to succeed.”

Chagrin didn’t play a man down for the rest of the game, but University answered in the second quarter, when Brennan assisted senior midfielder Connor Zwagerman and Curley on back-to-back tallies to tie the game, 3-3, with 7:39 left in the half.

Chagrin junior middy Connor Brosnan then made the Preppers pay on a Tiger extra-man tally, when he received a dish from Croasdaile and buried a sniper to reclaim the lead, 4-3, with 6:21 to go in the half.

“The coaches all year have been telling me that, when the guy up top gets the ball, I’ve got to step in and make sure I’m either drawing the man from the crease or catching and shooting it,” Brosnan said. “And that time, I was able to get my hands free, let one go and get a five-hole on Critter. He’s a great goalie, a great player, but that time I got the best of him.”

University answered back with one more equalizer, when freshman middy Nate Miller buried one top shelf with 4:03 left in the half, but that’d be the last goal for the Preppers until less than two minutes remained in the game.

With two minutes before intermission, Chagrin’s Lowe buried his second tally of the game, off an assist from Brosnan, when the Preppers were late getting their penalized player back into action, for the 5-4 upper hand at the break.

“Griff’s one of the most underrated players on our team,” Corto said of Lowe. “He does all the dirty work. He gets the groundballs. He’s the most unselfish player you’re going to find. He’s a captain. He’s had outstanding leadership this year. Once the regular season ended, I challenged the seniors to lead this team one game at a time, and they have.”

In the second half, and really throughout the game, Chagrin junior faceoff specialist Johnny Cashy continued his make-it-take-it talent that he’s demonstrated all year. Cashy finished the night 13-of-18 from the X with seven clamps.

Specifically when Chagrin scored three unanswered goals in the third quarter, Cashy won all four of his faceoff battles with Gaizutis and junior Will O’Brien helping him out with a pair of groundballs in that frame.

“We knew they might throw different guys at (Cashy) barring his success at the face,” said Chagrin’s Zak Gebler, the Region 6 assistant coach of the year. “He still did a great job getting the clamp, getting his exits and getting possessions for us really.

“So, he is highly driven for success. He wants to know his numbers throughout the game, how he’s doing, and then, from there, how he can adjust to make sure his percentage is staying high throughout the game. He really adapts on the fly and tries to win every single face.”

Midway through the third quarter, Chagrin’s Brosnan tossed a horizontal feed over the center alley to junior middy Ben Kniskern, who buried it top shelf for the 6-4 upper hand.

Then Chagrin’s lead scorer, senior attackman Alex Morris, buried back-to-back tallies, the first coming unassisted on a back down of a US defender, and then latter in transition, when Croasdaile relayed a pass to Owen, who assisted Morris for the 8-4 spread with 1:25 to go in the third quarter.

After more than 26 minutes without scoring, University netted the final two goals with 1:29 and 1:16 remaining in the game, but it was a little too late for the Preppers, whose campaign ended at 18-5.

“We had a chip on our shoulder, and this was a bit of a revenge game,” Brosnan said. “We wanted to get back at them for what they did to us in the regular season, and I think it was apparent today that we were focused and ready to go.”

Improving to 18-3, Chagrin was scheduled to play Toledo St. Francis de Sales in the state semifinals on Wednesday night.

The winner of that game will play either Columbus St. Francis DeSales or Cincinnati Mariemont in the championship game at 1 p.m. Saturday at Ohio Wesleyan University’s Selby Stadium in Delaware.