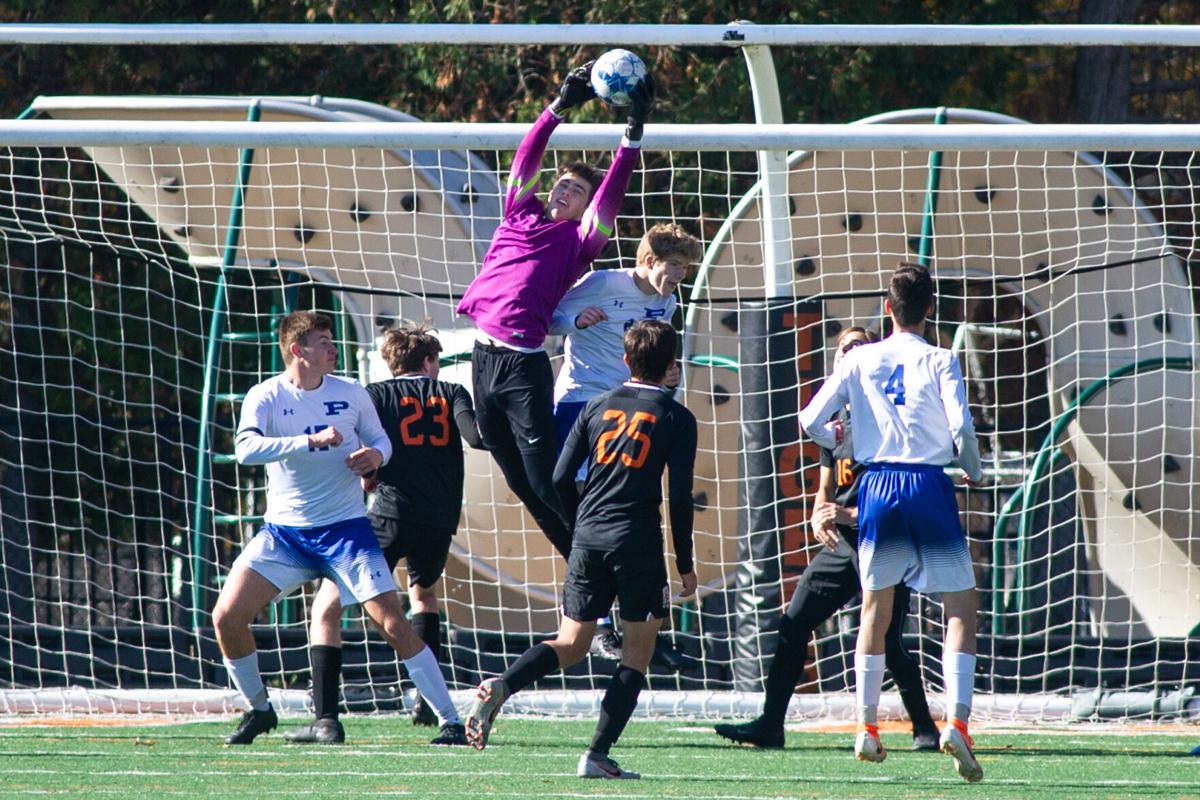 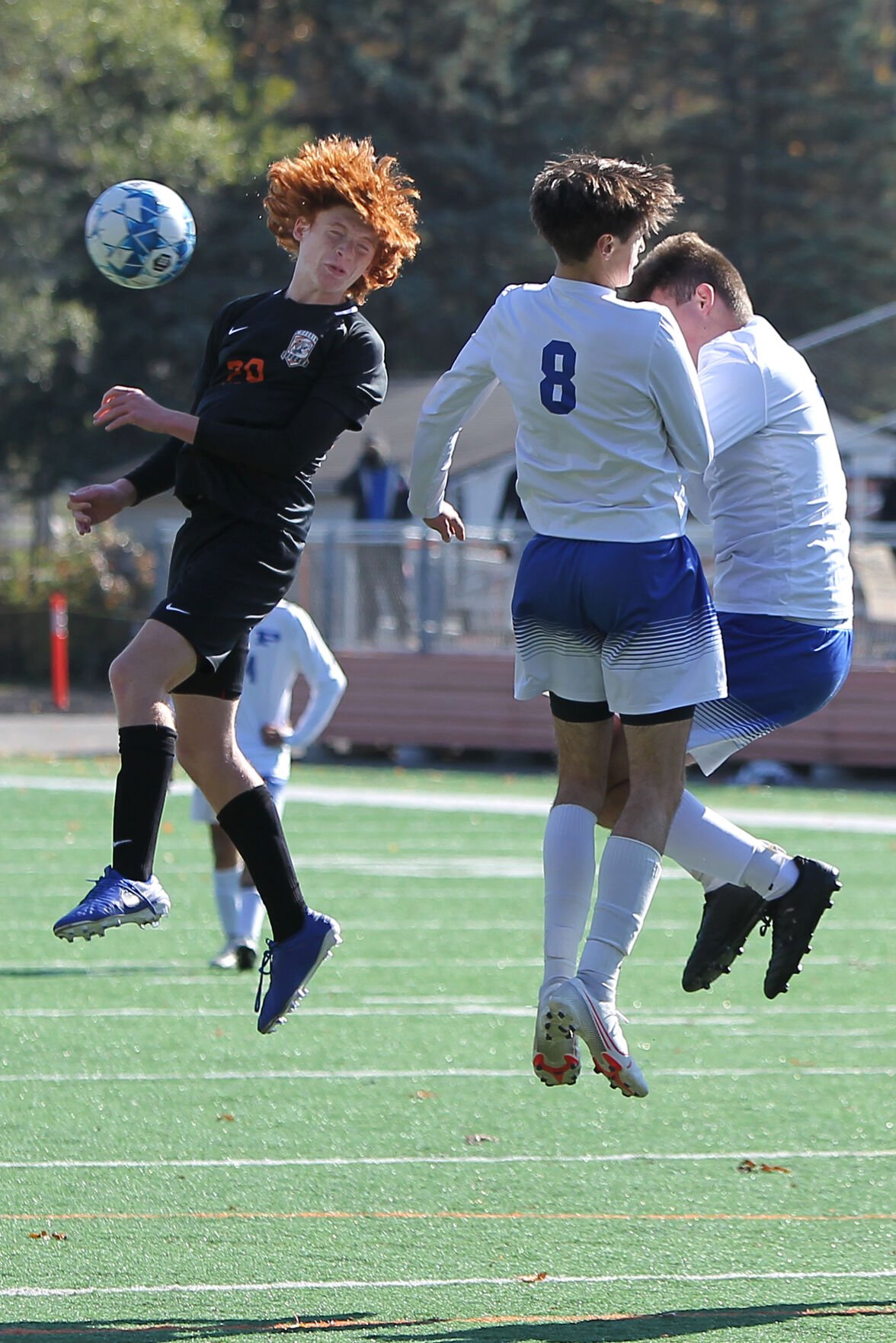 With 47 seconds remaining in the first overtime period, Revere junior forward Andrew Cooke scored the golden goal on a deflected cross in the box that rolled into the far, side netting for the 1-0 win.

Just like that, the Chagrin Falls boys soccer season ended short of expectations in the Division II district championship game.

The 2020 Tigers (17-2) were in danger of letting history repeat itself during their district title game against Poland Seminary (16-1-2) Saturday afternoon on their home pitch at C.S. Harris Stadium. Through 80 minutes of regulation, another 0-0 overtime battle was brewing.

“It gets nerve-wracking at this point. Your legs are tired, everything is intense, and one goal ends your season,” said Chagrin Falls senior center back JT Marting, who is one of two Chagrin strikers who also started on that 2018 district runner-up team. Senior forward Ellis Clark is also a third-year starter for the Tigers.

“I think the difference between this team and that team is that, when we were sophomores, we had some great talent and a couple of really skilled players,” Marting said. “But our bond this year is just unbreakable. Everyone works their hardest, everyone just fights to the last minute, and I think that’s the difference.”

Chagrin Falls entered Saturday’s match with the top seed in the 14-team district and ranked No. 5 among Division II programs statewide, according to Ohio Scholastic Soccer Coaches Association pollsters, while Poland was the second seed and ranked No. 14.

But with Chagrin Falls senior goalie Jack Stauffer, six saves, and Poland senior goalie Nate Hayes, eight saves, both standing on their heads throughout, it was anyone’s game to win with likely a lucky bounce to be the determining factor.

“Every time it’s this kind of game, I’m always thinking, ‘Who’s going to be the better keeper?” Stauffer said about his counterpart standing 110 yards away. “I’m not necessarily better than him, but I performed better today.”

Stauffer had to show up early, including a patient save on a Poland through ball to senior forward Dom Gill in the fifth minute, and then a rocket from 25 yards out by sophomore attacking midfielder Noah Huda in the 26th minute that went off Stauffer’s fingertips, hit the cross bar and came back down to safety.

Not to mention, Poland senior winger Justice Gonzalez, who came in with 23 goals and 11 assists, found a dangerous opening in the box in the 21st minute, but Stauffer laid him out before he could turn and shoot.

“We certainly had to keep an eye on Justice Gonzalez, their left forward who sometimes plays striker,” Chagrin Falls fourth-year head coach Brian McKenna said. “We knew he had that ability to make a turn and beat the last defender. Our defense came up strong many times.”

In the second half, the Tigers played with more patience in space, which in turn limited turnovers and counterattack opportunities for Poland. And Chagrin’s defensive unit of Marting, sophomore center back Andrew Nachtwey and a rotation of senior outside backs Alex Fisher, Brenden Levey and John Ranieri buttoned up the through balls.

Holding midfielders Brett Vaccaro, junior, and Clayton Pilotti, senior, were also in on that effort.

Midway through the first 15-minute overtime period, Poland’s Gill did get a shield to possess in the box and got a touch over to Noah Huda, who took a straight-on strike from 15 yards out that Stauffer was in position for the save. That Bulldog duo combined for 30 goals and 23 assists coming in.

Each side had a corner-kick opportunity later in the sudden-victory period, but the score remained, nil-nil, through 95 minutes with double overtime brewing.

“Our set pieces were just not up to what we’re normally seeing with JT (Marting) typically able to get at least one in during a game, whether it’s himself or someone else finishing it,” McKenna said.

Chagrin Falls senior center midfielder Ian Zitney has been the beneficiary of most of those free kicks or corners this season, leading the Tigers with 15 goals and nine assists.

“I certainly felt they marked Ian quite well in that midfield and just closed in on him very well,” McKenna said. “So, I applaud the Poland team. They played a battle out there with us. It really could have gone any way.”

Chagrin’s main opportunity involving Zitney on Saturday was when the elder Clark played a diagonal ball over the top with Zitney putting a solid header on goal from the backdoor, but Poland keeper Hayes was in position for a point-blank, reaction save in the 68th minute.

But both teams were itching to score with a multitude of set pieces, where roughly two-thirds of goals are put away on the pitch.

Specifically for Chagrin Falls, Marting took five free kicks and eight corner kicks, including three corners in the second overtime, all off which were turned away.

“Honestly, I wasn’t really on my game for the free kicks for a little bit,” Marting said. “And there were a couple corner kicks that I was crossing my fingers and hoping it could get in, and we just couldn’t capitalize on it. To be honest, I thought we were going into penalty kicks, and I was a little bit nervous for that.”

Meanwhile, mostly any free kick from beyond 35 yards out was taken by Chagrin keeper Stauffer, before he’d hurry back to his box in case of a quick clear and counter.

In the second half alone, Stauffer took three free kicks from the 45-to-50-yard range, including one that Cantor got a slip-header on, but Poland’s Hayes managed to make a diving save in the 72nd minute.

Midway through the second overtime, Chagrin Falls was awarded a free kick from 38 yards out that the Tigers loaded up the box for, with keeper Stauffer lining and blasting a low rocket by traffic that barely changed trajectory on a skim off the top of a defender’s head, before it took one bounce and found the left side of the net for the walk-off victory in the 102nd minute.

“I mean, coach put me up to take the shot, and there was a wall with about a 6-foot gap on the left side,” Stauffer said. “I didn’t even think the goalie could see me. So, I shot it right in the little section, the goalie froze, and it went right in.”

Behind that 1-0 result against a previously undefeated Poland side, Chagrin Falls captured its first district banner since 2011, when former head coach Mario Gerhardt led his 12-5-2 Tigers to a 3-2 victory against University School.

“Our last district title win was many years ago,” Stauffer said. “So, for our name to be recognized, it means a lot, and it’s going to live with us for a lifetime.”

While Chagrin Falls avenged its district title loss from two years ago, the Tigers advanced with an opportunity to avenge the team they lost to – state No. 11-ranked Revere (11-5-1). That regional semifinal game was scheduled for Wednesday night.

The winner will play in the regional championship on the road against either Bay Village or Warren Howland at 3 p.m. Nov. 7.