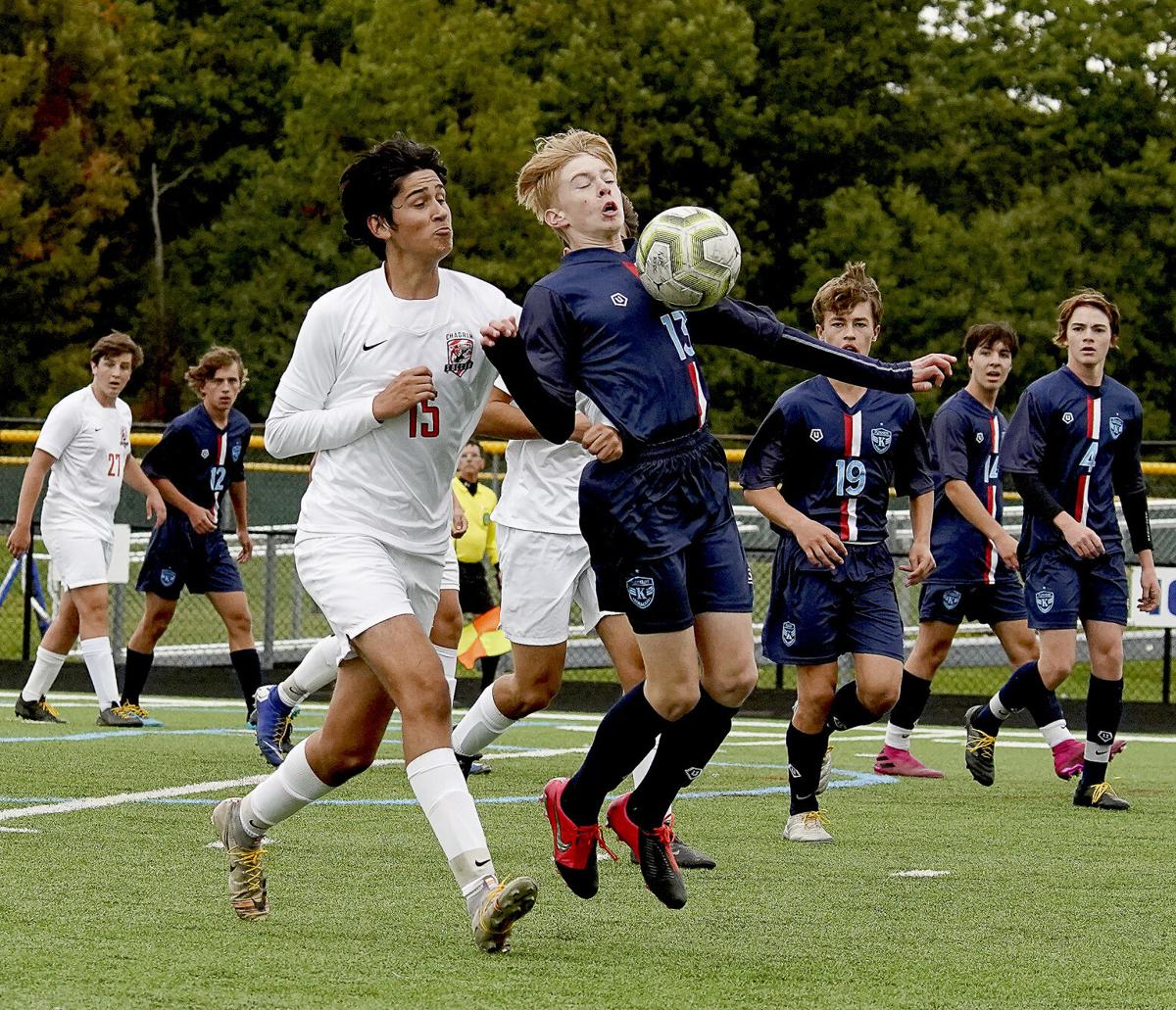 Kenston freshman midfielder Rex Eberhart controls the ball on his chest as he feels the pressure of Chagrin Falls senior midfielder Clayton Pilotti on his six during the Tigers’ 3-2 road victory on Saturday in Bainbridge. 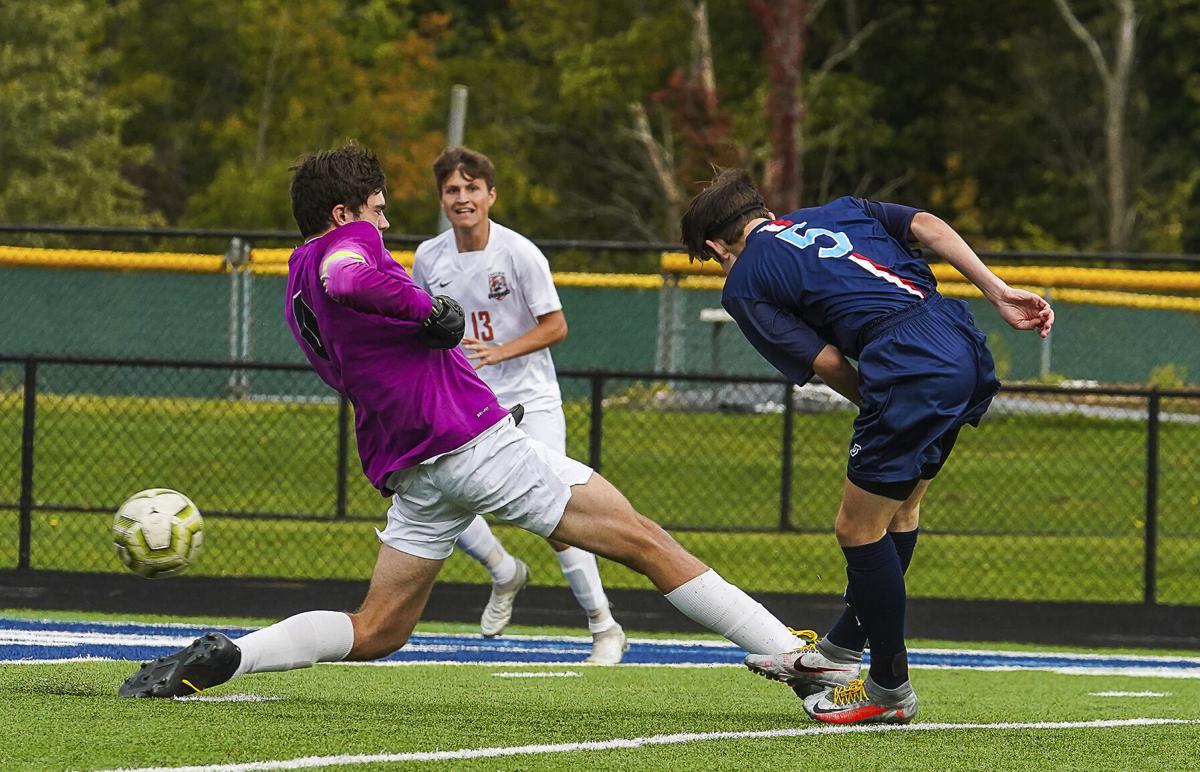 Kenston junior forward Joey Holodinski (right) sneaks a shot by Chagrin Falls senior keeper Jack Stauffer in the seventh minute of a backyard brawl that ended in the Tigers’ favor, 3-2, on Saturday afternoon in Bainbridge.

Kenston freshman midfielder Rex Eberhart controls the ball on his chest as he feels the pressure of Chagrin Falls senior midfielder Clayton Pilotti on his six during the Tigers’ 3-2 road victory on Saturday in Bainbridge.

Kenston junior forward Joey Holodinski (right) sneaks a shot by Chagrin Falls senior keeper Jack Stauffer in the seventh minute of a backyard brawl that ended in the Tigers’ favor, 3-2, on Saturday afternoon in Bainbridge.

The Chagrin Falls boys soccer team’s streak of five consecutive shutouts came to a screeching halt early on during the state-ranked Tigers’ road test against rival Kenston on Saturday afternoon in Bainbridge.

In the seventh minute, Chagrin Falls played a possession back to senior keeper Jack Stauffer, who took a touch on top of the ball and tripped just as junior forward Joey Holodinski was coming in to pressure him. Holodinski tracked down the loose ball at the top of the box, where he made a one-touch, turning shot that got past a sliding Stauffer.

While the Tigers entered the match at 10-0 with nine shutouts and ranked No. 7 among Division II programs in the state, according to the coaches poll, they faced their first deficit of the season on that mishap.

“He was moving the ball, and it just was a weird mistouch for him,” Chagrin Falls fourth-year head coach Brian McKenna said. “Kudos to the Kenston forward that pounced on it and was aggressive, pulled it back and took a shot. And that was the first time we’ve been down all season. Kenston came out ready to play and wanting it more at the onset of the game.”

Chagrin Falls was without two starters – one from injury and one who was quarantining – and then lost another starter, senior defenseman Brenden Levey, who exited with an injury midway through the first half.

Kenston, meanwhile, entered the match at 8-2-1 with three straight shutouts of its own against Western Reserve Conference foes Eastlake North, 3-0, Brush, 6-0, and Willoughby South, 5-0.

In the ninth minute, Chagrin senior center back JT Marting buried a lefty free kick into the left side netting from 22 yards out. Kenston sophomore keeper Jonas Grunden was on the opposite post still trying to lineup his wall when Marting pulled the trigger. Two other Tigers were lined up to his left as if the Tigers were still figuring out who would take the kick.

“Once we have the go-ahead from the official, JT has earned the ability to go forth and give it a shot, and he did,” McKenna said. “So, we responded back rather quickly. I think it was helpful that we understood that we can come back, and not only once, but we came back twice.

“We still weren’t playing well for ourselves. We eventually started putting together some passing and such, but we just were out of sorts a bit for the whole game. Part of that was due to a strong Kenston team that put a lot of pressure on us. We haven’t been seeing that lately.”

Through their first 10 games, the Tigers outscored their opponents, 33-1, with their lone one-tally result coming by way of a 1-0 road triumph in a season opener against Aurora on Aug. 29.

The score against Kenston remained 1-1 at intermission, but the Bombers struck again in the 44th minute.

Moments after a Chagrin midfielder unsuccessfully tried to split a pair of Bombers on a clear, Kenston senior forward Tom Roche pushed a horizontal feed across the top of the box and Holodinski hit a one-touch grounder off the far post and into the net for a 2-1 advantage.

“One of our center mids just had a bad clear, made a mistake and, again, kudos to Kenston because they were not sitting idly by and jumped on it,” McKenna said. “And that goal just hit the inside of that far post. It was a nice goal by Kenston.”

Three minutes later, Kenston had a direct kick from 20 yards out that Stauffer directed wide on a diving save to prevent the Bombers from taking a two-goal lead.

Averaging less than two saves a game this season, Stauffer hasn’t seen many shots on net thanks to his defensive guys, which also includes sophomore Andrew Nachtwey and seniors John Ranieri and Alex Fisher.

“That was certainly very significant, but it’s the kind of save that (Stauffer) is capable of making, and he’s made a few of those throughout this season,” McKenna said. “And, fortunately, he’s very athletic, has some good height and reach and was able to get a hand on that ball.”

Chagrin netted the 2-2 equalizer when senior midfielder Ian Zitney brought a possession down to his feet at the top of the 18-yard box and then beat, not one, not two, but three defenders, before hammering home a shot from the right side of the 6-yard box to the far, left post in the 63rd minute.

Zitney leads the Tigers with 13 goals and five assists this campaign.

“This is something we’ve been fortunate to see out of Ian these past two seasons, where he can challenge the back line of a strong defense and get through them,” McKenna said of Zitney’s footwork. “He’s capable and confident enough to make that final touch into the goal. He didn’t rush it and was able to push it on over to the backside.”

Chagrin ended up pulling Stauffer from goal midway through the second half to move him to attack and create some chaos up top, while fellow senior keeper Andy Neimeier buttoned things down between the posts for a bit.

Stauffer didn’t score, but his teammates did.

With nine minutes to play in the match, a Kenston defender was trying to shield a long throw-in by Chagrin while it rolled out of bounds at the end line for a Bomber goal kick. The problem was, the shield wasn’t quite strong enough.

Tiger senior Ellis Clark mad a hustle play around the defender and got a foot on the ball just before it reached the end line to send it back to the top center of the box, where senior midfielder Clayton Pilotti hammered home a one-timer to the near post for Chagrin’s first lead of the game, 3-2.

Stauffer returned to goal after that and tucked Kenston in for bed, as the Tigers remained perfect at 11-0.

“This has been a very special season, because these guys are a close group that works well together,” McKenna said. “There’s no one that wants the limelight. They just want to do whatever they can for the team’s sake. So, it’s really neat to see them come together.”